Sussex County Council Member Finley B. Jones' home on Sussex Street (left) was one of several in town which had been torn down after Labor Day, 2005. Jones replaced it with a new larger home (top right). According to a source in the Rehoboth Beach city government, the city is aware of some potential issues regarding the property which included an initially wider-than-allowed driveway entrance (curb cut), and possible excessive lot coverage. Also mentioned were an unusually large attic where collar beams (right) are used in a possible attempt to skirt square footage limits. Areas of less than six-foot ceiling clearance do not count in the total living space calculations. The building permit for this house was reportedly submitted prior to the more-restrictive new floor area ratios (FAR) approved last year.

A woman called Rehoboth Beach police around 12:20 a.m. Memorial Day reporting a woman crying for help in the surf. She said the victim was in front of the south boards Grotto's Pizza.

Minutes passed as police searched the surf in the dense fog for the missing woman. While the police dispatcher was on the phone with the Coast Guard at 12:35 a.m., an officer reported once again hearing screams, this time coming from in front of the Star of the Sea Condos -- a couple blocks south. A minute later, an officer announced that the victim was on the beach.

According to a witness, a six-foot tall man successfully pulled the woman to shore. The woman was carried from the beach by police and EMS workers, then taken by ambulance to Beebe Hospital. Police had said over the radio that she was conscious but in mild distress. The hero disappeared into the morning fog.

Last year at this time, some Rehoboth Beach visitors found free parking at the four Reino multi-space parking meters on Grenoble Place, near the Henlopen Condo. The city was reportedly waiting for parts which did not arrive in time for Memorial Day Weekend, 2005.

The Reino tech below said he was flown to Rehoboth Beach this year so he could install the meters which had been placed in winter storage. While working in front of High's on Thursday evening he said he was updating the last few of the 99 parking meters for which he was responsible.

Throughout the weekend, Rehoboth Beach parking enforcers handled at least a dozen meter and change machine complaints each day. Most were promptly corrected, with the exception of meter R-300 (below) which is in front of Wilmington Trust on Rehoboth Avenue. It services only three parking spaces. When it displayed SERVICE IS NEEDED early Sunday evening, a city meter technician stated he was unable to repair it, and would leave it out of service for the weekend. 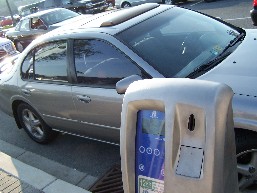 The line waiting to get into the 59 Lake Restaurant on Saturday's gay dance night stretched into the street. Around 11:30 p.m., Rehoboth Beach police responded after receiving a complaint that the line potentially interfered with traffic. Police returned to the restaurant about 30 minutes later for the establishment's first loud music complaint of the season.

Complaints specific to this restaurant have caused the city to revisit current noise codes with respect to volume limits and enforcement methods. Obie's by the Sea received a loud noise complaint Saturday promptly at 11 p.m. when the sound ordinance takes effect. Obie's received a second noise complaint Tuesday morning (the day after Memorial Day) at 12:35 a.m.

There were no performances on the new Rehoboth Beach bandstand this Memorial Day Weekend because of construction which is supposed to last through late June or early July. The area was also unavailable for parking.