Having trouble viewing this report or its photos? Click here: http://henney.com/weekend01/ or e-mail alanhenney@aim.com

State troopers quickly captured a suspect shortly after firefighters were called to a fire at Beachaven condos. The complex is in the 25900 block of Haven Drive off Munchy Branch Road near Coastal Highway.

Around 8 p.m. Monday, firefighters from Rehoboth Beach, Lewes and Indian River responded for the fire. People were reported trapped.

One man fled the building and troopers pursued him through the parking lots from Giant, Kmart and finally, near Applebee's, where he was captured. 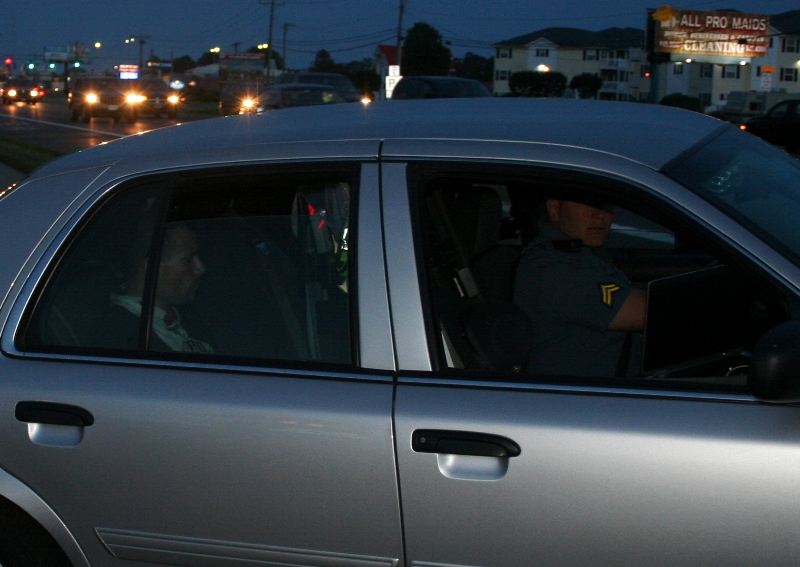 Firefighters had the fire quickly under control with a reported minor injury.

One report suggested it was domestic in nature.

According to one source, after the fire was extinguished, officials discovered what appears to be a drug lab. The county hazmat and DNREC responded to the scene.

The state fire marshal, DNREC and the state police are investigating.

Members of the MERR Institute spent the holiday weekend trying to determine what killed a seemingly healthy Pygmy sperm whale.

The whale was found dead Sunday morning between Conquest Road and the lifesaving station.

Suzanne Thurman, executive director of the MERR Institute, led the investigation. They conducted a necropsy and took samples. 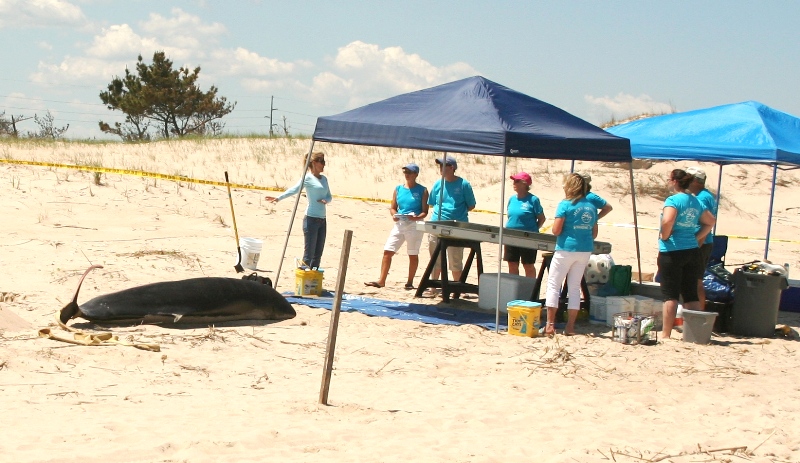 Ms. Thurman said Monday that the young adult male whale had no obvious signs of trauma. But it did have a few bruises and had a previous tail injury that possibly suggested it had been entangled in a net or something similar and stomach ulcers. Although she said it seemed healthy, she noted the whale was inundated with parasites.

A ditch was dug near the sand dunes where the whale was buried. Ms. Thurman said her team had taken samples and will send them to the lab and hopefully determine what killed this whale.

On Friday, smelly remains were reported to DNREC along the surf in North Shores, just south of the Gordons Pond section of the Cape Henlopen State Park.

DNREC was notified around 6 p.m. by a citizen who thought the skeletal remains looked like that of a shark. Ms. Thurman said the remains appear to be that of a sturgeon.

The DNREC ranger said disposal of the remains was the responsibility of the North Shores community since they were not on state property. 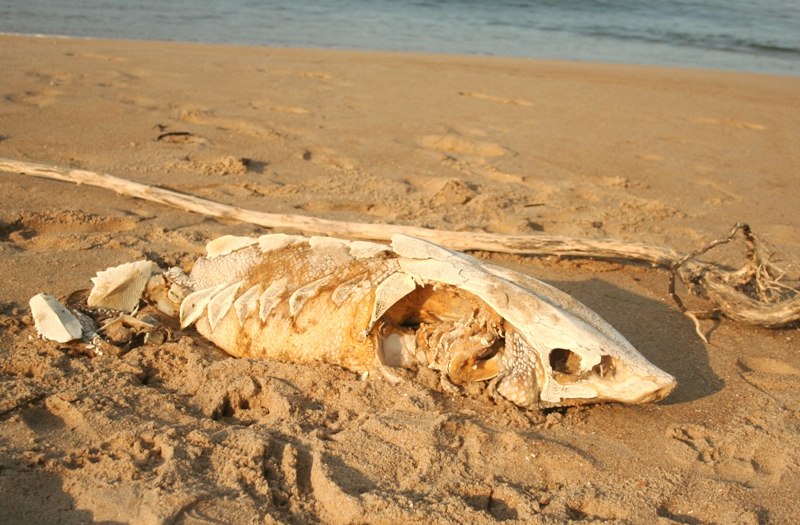 More than 20 species are commonly referred to as sturgeon. They are distinctive for their elongated bodies, lack of scales and occasional great size. Sturgeons typically range from seven to 12 feet and some grow up to 18 feet. See this link for details.

Rehoboth Beach police have been busy warning visitors who are violating the city's new non-smoking ordinance which applies to parks, playgrounds, bandstand plaza, boardwalk and accessways, beach and dune crossings in town.

As of Friday morning, Chief Keith Banks says officers have given verbal warnings to 89 smokers. No citations have been issued. The majority of the violations, he noted, occurred on the boardwalk at Rehoboth Avenue. 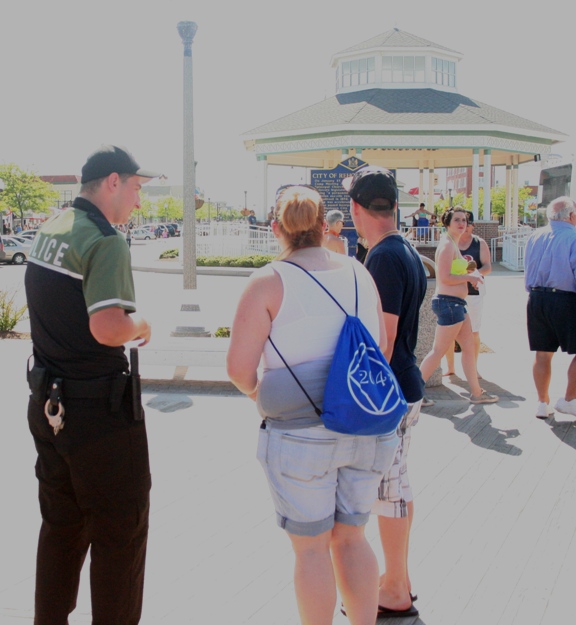 The city's Smoke-Free Initiative became effective on May 15. The city does have designated smoking areas for those who feel the need to light up.

"Based on a three-year-old ban on smoking in our City parks and children's playgrounds," says Commissioner Stan Mills, "I am confident our newly expanded smoke-free initiative will be successful and that voluntary compliance will be the rule. I look at this first month in the summer season as being the start of a year or two-year long education program to familiarize smokers with the new regulations."

"We have to recognize that every week, or even every day," Comm. Mills added, that "we will welcome a new set of visitors and need to seek to inform them of the new smoke-free areas where the smoking of tobacco products is prohibited; assisting the City in this task are the Rehoboth Beach-Dewey Beach Chamber of Commerce, Rehoboth Beach Main Street, Rehoboth Beach Public Library, rental real estate companies and hotels. And, of course, we have placed signage at the entrances to the new smoke-free areas to alert smokers of the smoking prohibitions in those areas." 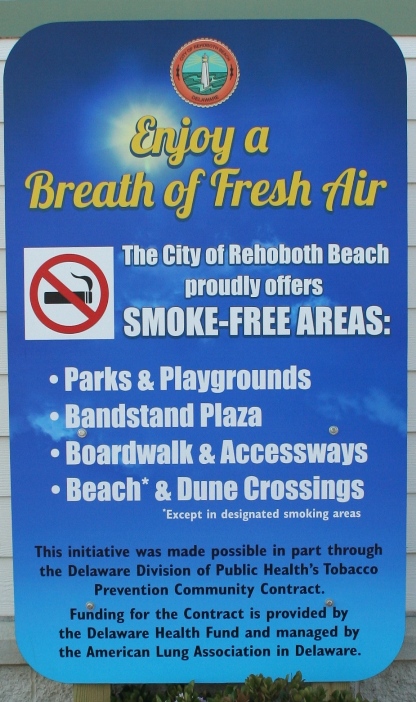 For more about the city's rationale for imposing smoking restrictions, to read the ordinance or for more information visit the city's website.

Businesses in Rehoboth Beach have been scurrying to get ready for summer and the big weekend. Not all of them were able to finish on time.

Rehoboth Beach police cited the job foreman at the Atlantic Sands Hotel on Baltimore Avenue Thursday evening for violating the city's after-hours construction ordinance. The hotel has been in the process of expanding and remodeling its pool and patio area and the project was not completed for Memorial Day Weekend. 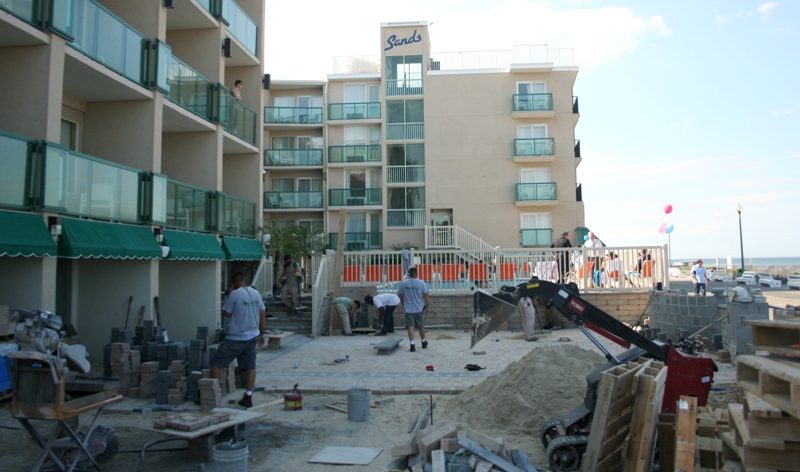 Lt. William Sullivan says the workers were warned prior to the citation. Officers believed the workers were cleaning up but then received another complaint about 25 minutes later which led to a citation being issued around 8:45 p.m.

At least one other business in town was warned Thursday evening and complied.

State troopers are looking for a man who held up the TD Bank in the Tanger Midway shopping center around 1:50 p.m. Sunday. 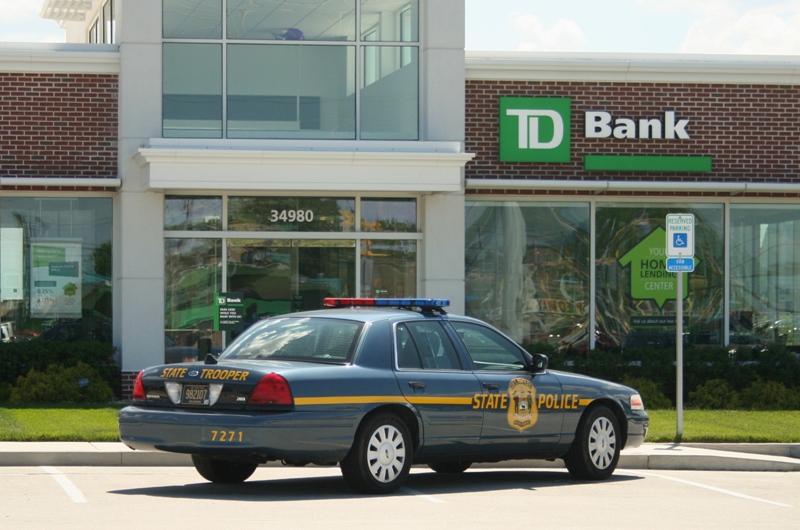 Police say the suspect approached the female teller and presented a demand note for money. The teller complied and turned over an "undisclosed amount" of cash. The suspect fled the bank on foot. There were no injuries as a result of this incident. 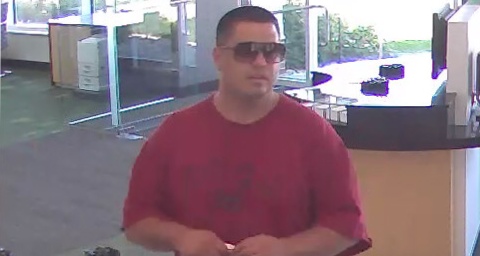 The suspect is described as a white man in his 30's about 5'09" to 6'0" tall, 200 lbs, stocky build, and black hair. He was last seen wearing a red short-sleeve shirt with "Blue Crabs Delaware" in blue letters written on the front, khaki shorts and sneakers. Police provided this surveillance photo.

A water line reportedly broke going to the Bay Resort Hotel on Sunday night. This is what it looked like Monday morning. 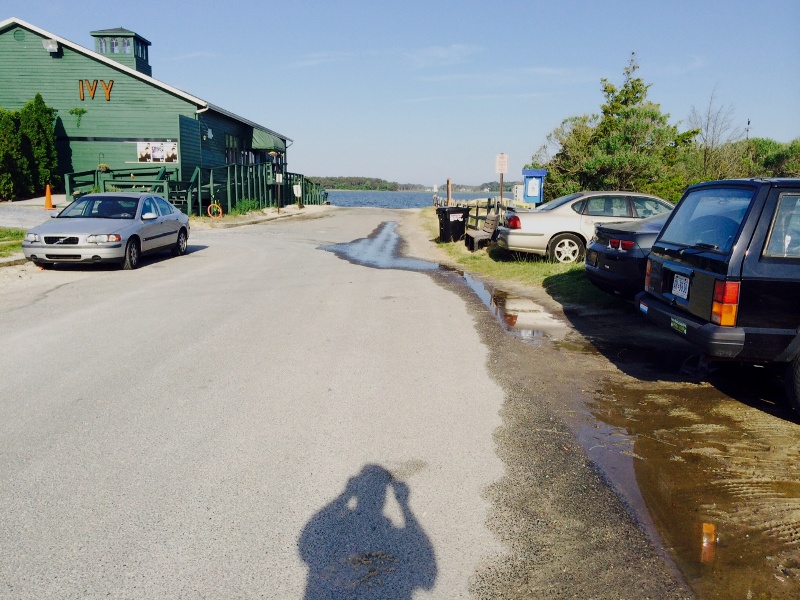 DIPLOMAT ALMOST GETS TICKETED AND TOWED

Rehoboth Beach police were summoned to the corner of East Lake Drive and Prospect Street around 1:20 p.m. Sunday. A white Porsche Panamera 4 with diplomat tags had been illegally parked at the corner in the yellow zone. 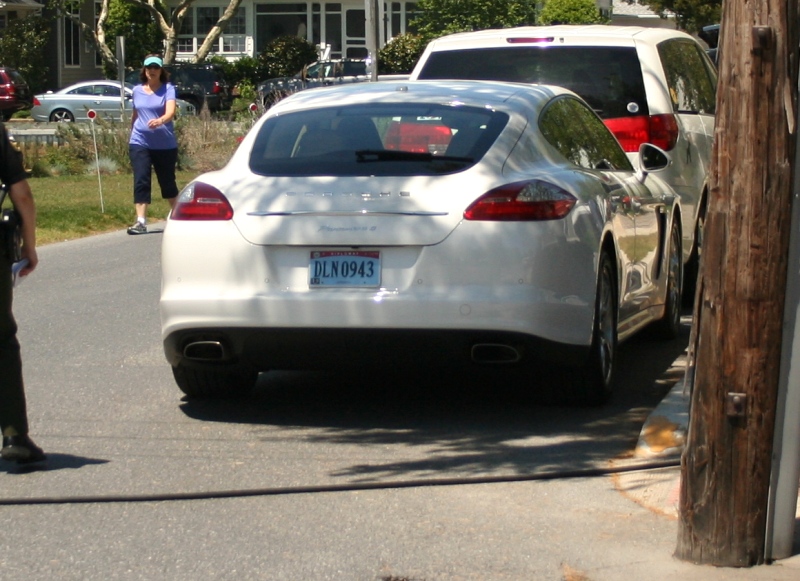 Police called for a tow truck and an officer was in the process of writing a ticket when the occupants returned.

They got off with just a warning.

According to the Washington, D.C. DMV, this same license plate has received five parking tickets in 2013 for a total of $200. Those tickets have been paid. But earlier this month, the DMV website reports that this vehicle received a $100 traffic citation for failure to display current tags.

According to Pooja Jhunjhunwala, Department of State press officer, diplomats are obligated to pay their tickets. Furthermore, Jhunjhunwala says, the State Department can withhold vehicle registration renewal for vehicles with outstanding citations/tickets.

The two-letter codes are random letters that determine the country. According to wikipedia, LN is assigned to Saudi Arabia. This license plate website also provides more details how the tags are configured.

Officials from DART, the Jolly Trolley and the Cape May-Lewes Ferry met for their annual news conference at the foot of Rehoboth Avenue Thursday morning to remind visitors of the transportation options available for those traveling in the Rehoboth area this summer. 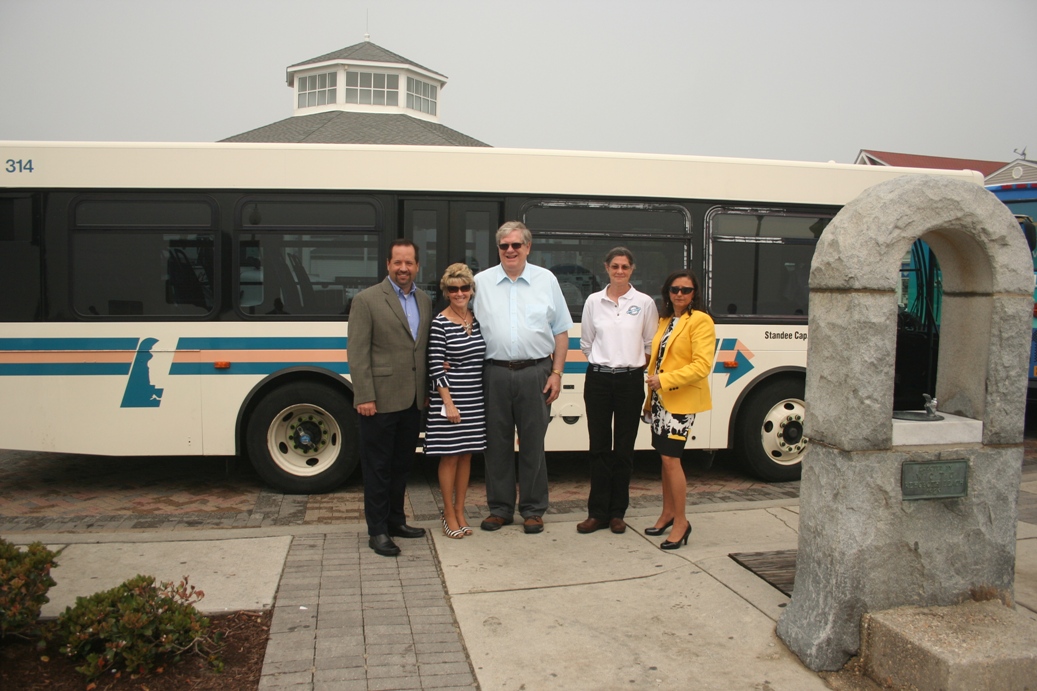 In addition, the Cape May-Lewes Ferry has its own shuttle service which is explained on its website. This is the ferry's 50th anniversary. Nikky Fisher, terminal manager, says there will be several special events listed on the ferry's website to mark this milestone.

Filling the gaps with specialized service is the Jolly Trolley which runs routes between Dewey and Rehoboth.

The entire news release and interesting details are posted on WGMD.com.

Catch news as it happens on 92.7 FM and on wgmd.com

POLICE USE FIRE EXTINGUISHER TO PUT OUT CARDBOARD FIRE

Cardboard stacked next to an HVAC unit caught fire around 2:30 p.m. Monday. This was in the alley between Dos Locos and the Oceanus Motel. 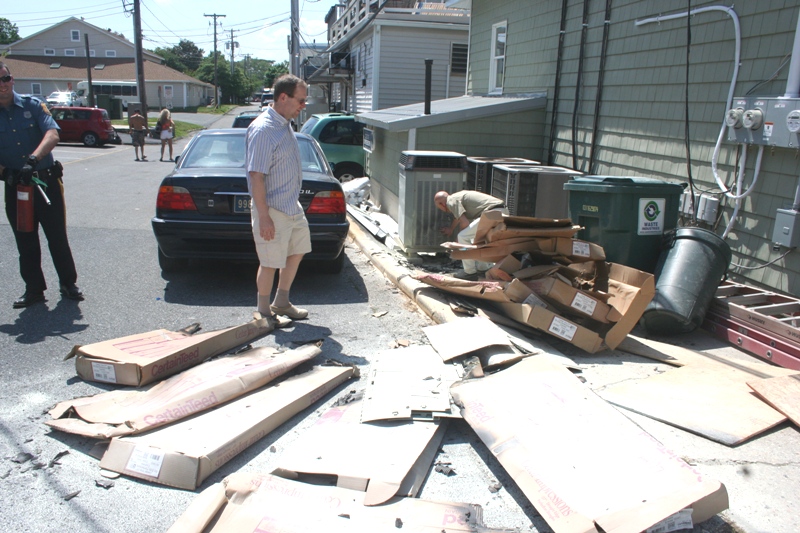 Police officers put out the fire using a fire extinguisher.

In a Feb. 22 posting on Downtown Rehoboth Beach, Bunky Markert had mentioned this illusion which appears just above the horizon while looking at the Jersey shore.

"There is an unusual weather phenomenon at the moment," Markert wrote, "because of the warm air today there is an inversion. As you look toward Cape May you see the coastline inverted in the sky. Hard to describe, it's a mirage."

This photo was taken around 6:50 p.m. Sunday just north of the Henlopen Hotel. 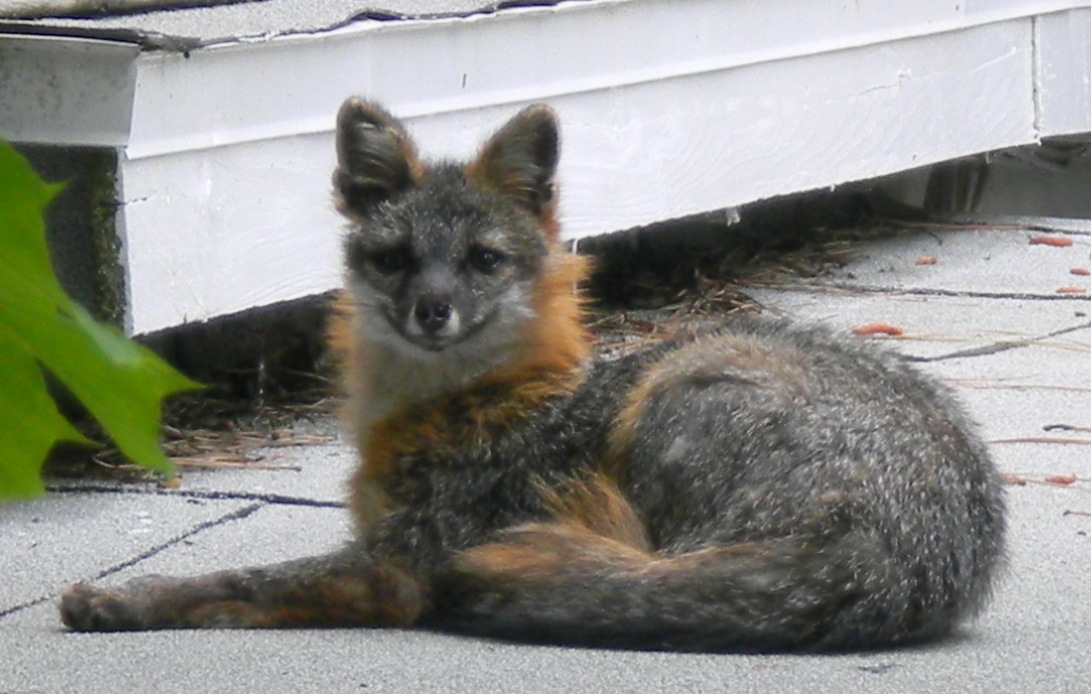 Our appreciation goes to Jim Davis of dcfire.com who creates many of our banners, year after year.

We welcome sponsors and partners for 2014. Please contact us if you have an idea or proposal!

If you spot me on the street, please stop me to say "hi!" 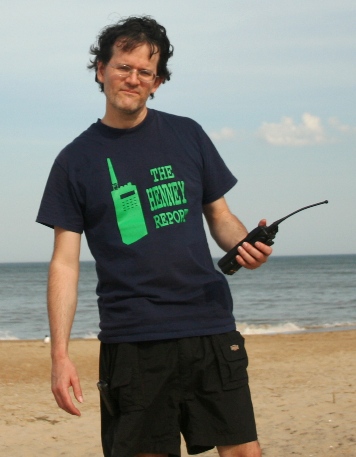 WOMAN GIVES BIRTH IN MOUNTAIRE RESTROOM--- A woman went into labor in the restroom at Mountaire in Millsboro around 4:45 p.m. Saturday. Eric Huovinen, Sussex County EMS special operations coordinator, said the plant nurse assisted with the delivery and deserves the credit. Baby and mother were doing ok when taken to Beebe Hospital.

MAN SERIOUSLY INJURED AFTER DIVE INTO BAY--- A 24-year-old man was seriously injured Saturday evening after he dove into the Isle of Wight Bay in Ocean City. It happened around 5:30 p.m. at the Wight Bay Condo, north building on 47th Street. That is where rescuers found the man still in the water about two-feet deep. He was conscious but had no feeling below his bellybutton. He was taken by ambulance to the landing site at Jolly Rogers Amusement Park and was flown to a trauma center.

MAN ARRESTED AFTER PARKING DISPUTE--- Rehoboth Beach police were summoned to the ocean block of Rehoboth Avenue after a parking dispute around 9:15 p.m. It reportedly escalated to an assault and police arrested one man.

LIFEGUARD TAKEN TO BEEBE--- A lifeguard from Rehoboth Beach was taken to Beebe Hospital after he began to show signs of heat exhaustion around 1:20 p.m. Monday near Laurel St. His condition did not sound life threatening.

Bicyclist injured in hit-and-run outside Rehoboth

Touch of Italy expands to OC

It is not too late to join the OC Beach Patrol!

This report is being e-mailed to 1,747 recipients. Thanks for your support!