Having trouble viewing this report or its photos? Click here: http://henney.com/weekend02/ or e-mail alanhenney@aim.com

3 SINKHOLES IN 3 DAYS IN REHOBOTH BEACH!

This past week has been an unusual week for sinkholes on the streets of Rehoboth Beach.

The series of sinkhole incidents began around 6 p.m. Wednesday when the rear wheel of this 2006 Dodge Durango slipped through the pavement in front of the Beach View Motel in the ocean block of Wilmington Avenue.

Public works crews the following day filled in the hole. They said a pipe beneath the pavement may have partially collapsed.

Although he has not heard the definitive cause, Commissioner Stan Mills said the sinkhole might be related to piping at the nearby linear sand filter storm drain basin. One can see the proximity of the series of metal grates which run along the curb for the drain basin. 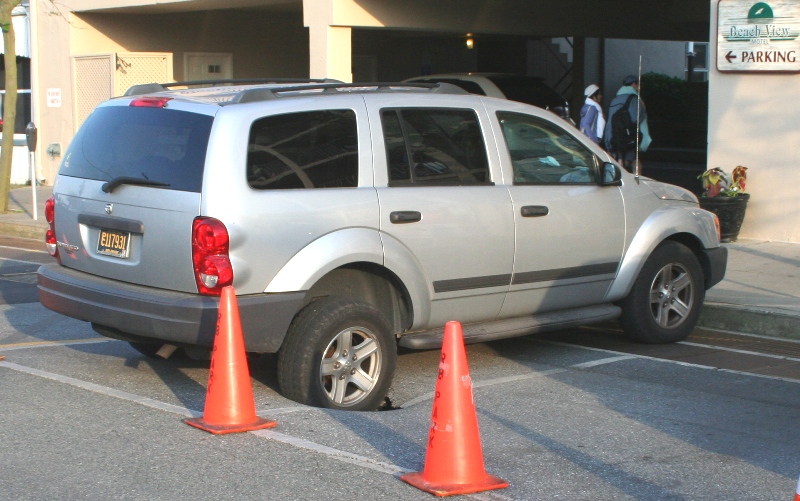 Police called a tow truck to pull the SUV from the hole. 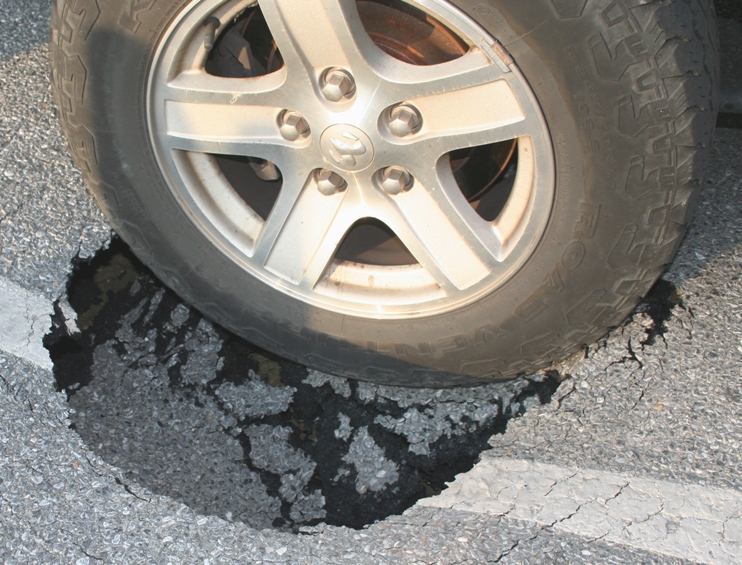 Thursday evening, the pavement opened in the ocean block of Baltimore Avenue and gathered a bit of attention. This appears to have been the largest of the three sinkholes. 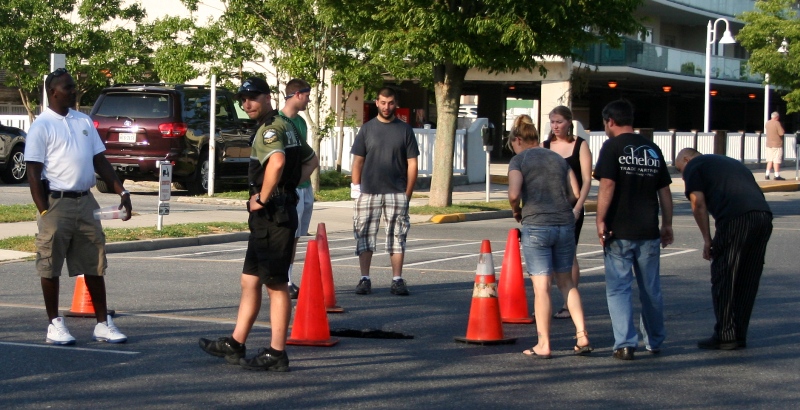 Public works crews filled the hole the following day. Although they did not report finding any obvious problem, it took an entire truck load of dirt to fill the depression. 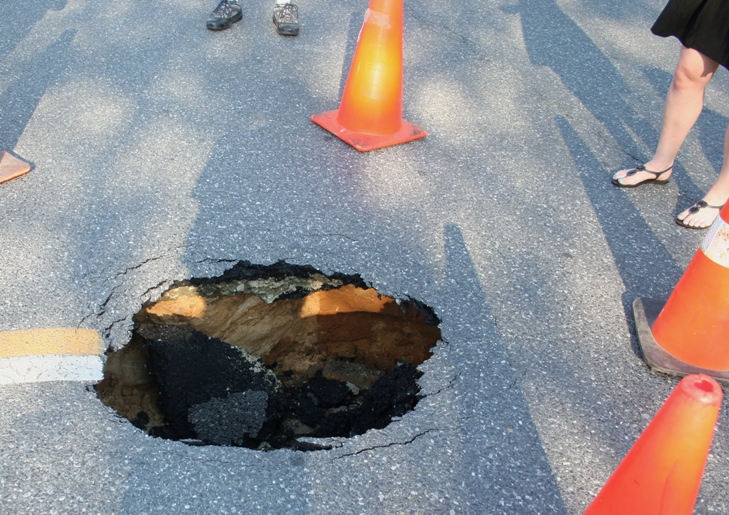 On Friday, public works crews returned to Wilmington Avenue for yet another sinkhole, about 50 feet from Wednesday's sinkhole. This one was in the middle of the street. The hole was patched for the weekend. Mayor Sam Cooper said there was not time to do a more thorough investigation on Friday. 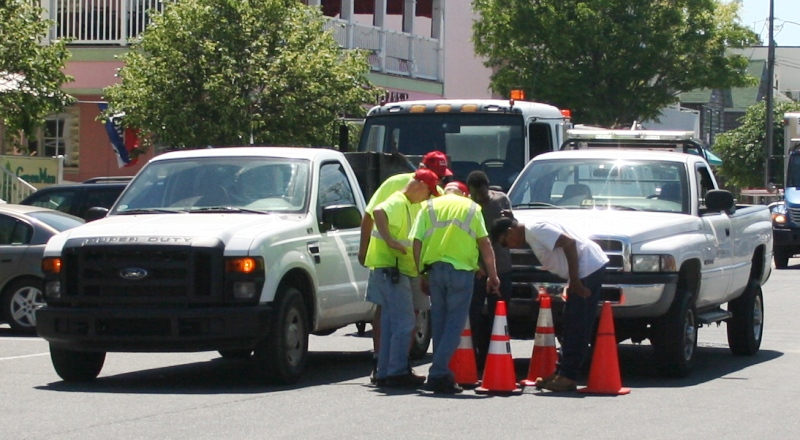 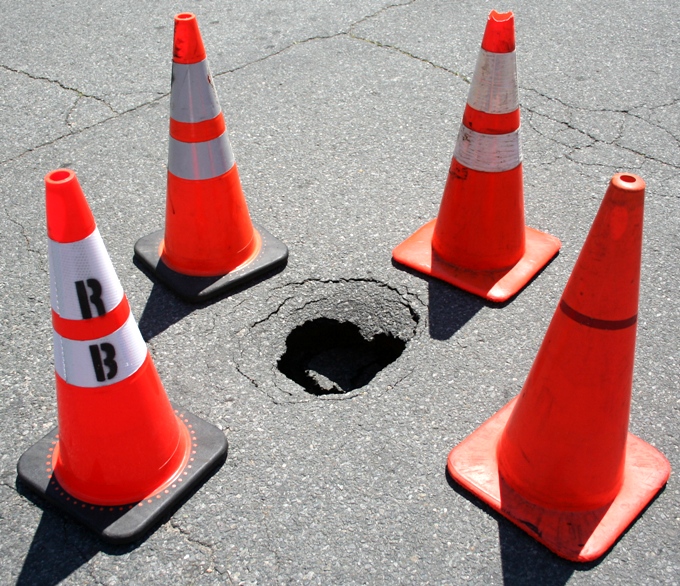 Commissioner Mills said there was also a depression -- not yet a sinkhole -- in the road the previous week on Maryland Avenue. "When they are spotted," he says, "the first priority is to cordon off the area to prevent anyone from getting hurt. The different city departments check maps to see what kinds of underground piping might be in the area - sewer, storm drain or water pipes. Then the appropriate department will investigate, typically by digging up the area, and then effect repairs to any damaged pipes and the roadway."

During the past couple weeks, several sand shark beachings have been reported in Rehoboth. On Thursday, the same shark appeared to keep coming to shore between Wilmington Avenue and Norfolk Street from 11 a.m. to around 2 p.m. 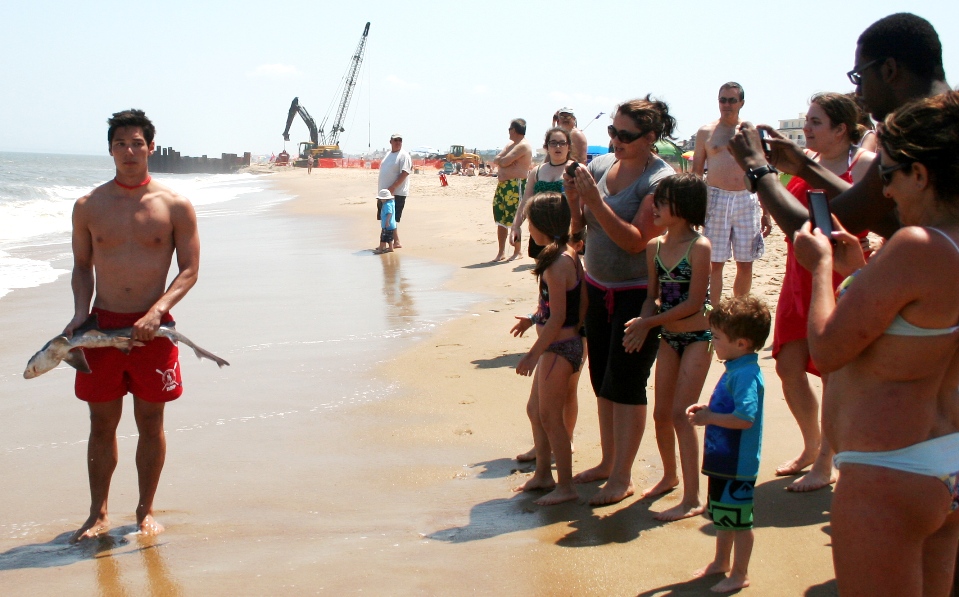 Witnesses said the shark kept swimming around in the surf, intriguing beach goers. Occasionally it would wash to the beach and somebody would return it to the ocean. 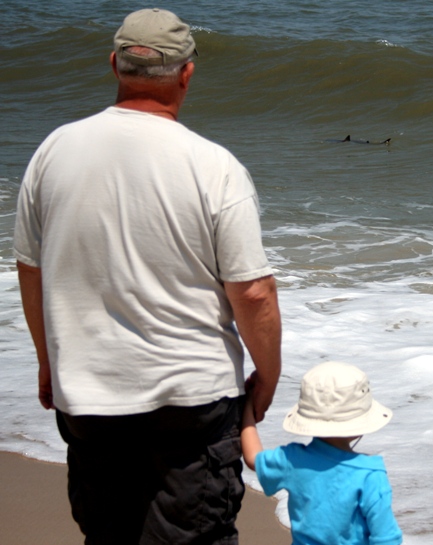 But even when the lifeguards swam it out a distance, the shark continued to return to shore.

A similar shark, perhaps smaller, was found dead on the north end of the beach Friday morning.

Fishing guru Capt. Monty Hawkins of Morning Star Fishing says this is a male smooth dogfish, otherwise known as a sand shark. Capt. Hawkins says "He's pretty skinny" and must be hungry. "The shark is very thin for its size," Capt. Hawkins states. "It's either ill or can't eat for some other reason. Perhaps this is why it was beaching itself." 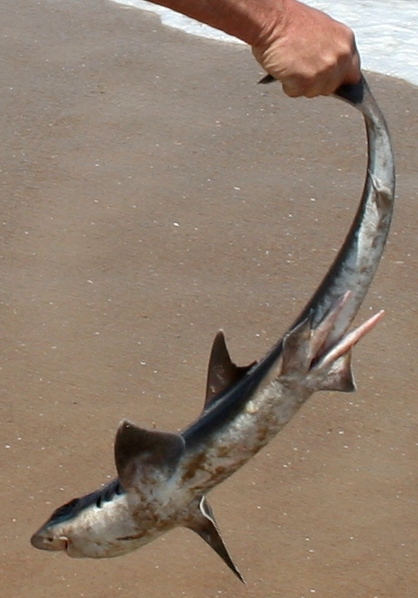 He also noted that male sharks have claspers (the shark in the photo is a male). 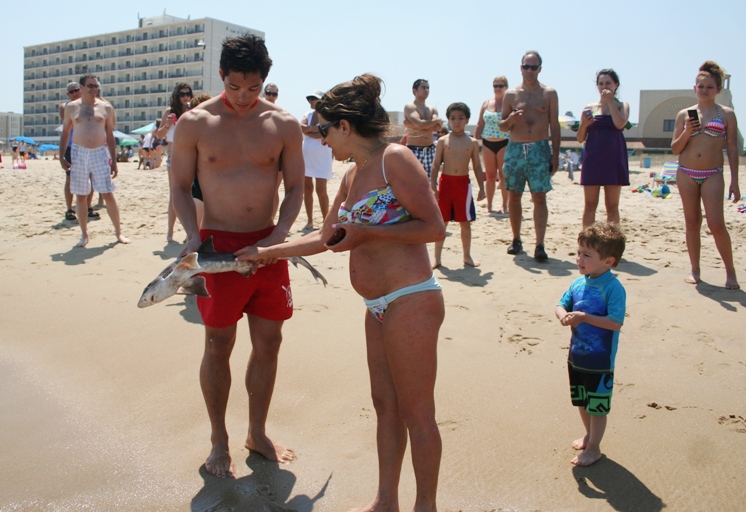 According to this Discovery.com webpage, the name "dogfish" comes from the shark's tendency to attack prey like a pack of dogs.

This is similar to this incident earlier in May when a larger shark beached itself also in Rehoboth.

Three 20-year-old men from Wilmington were involved in a serious accident along the "forgotten mile" Wednesday evening.

For unknown reasons, the car left the west side of the roadway and slammed into a utility pole next to Sea Esta IV. Carey and the two passengers were not properly restrained, Cpl. Fournier says, and they were taken to Beebe Hospital for non-life-threatening injuries. Two of the three men suffered broken or dislocated bones, among other injuries. Carey was trapped by the steering wheel, confused and in/out of consciousness according to a witness who came to assist. 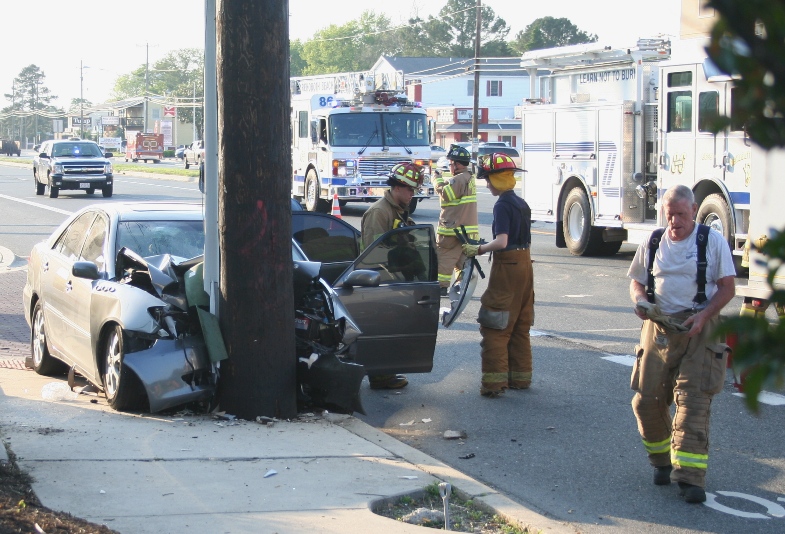 Carey was cited for driving under the influence of alcohol, failure to maintain lane, no license, registration, or insurance in possession. 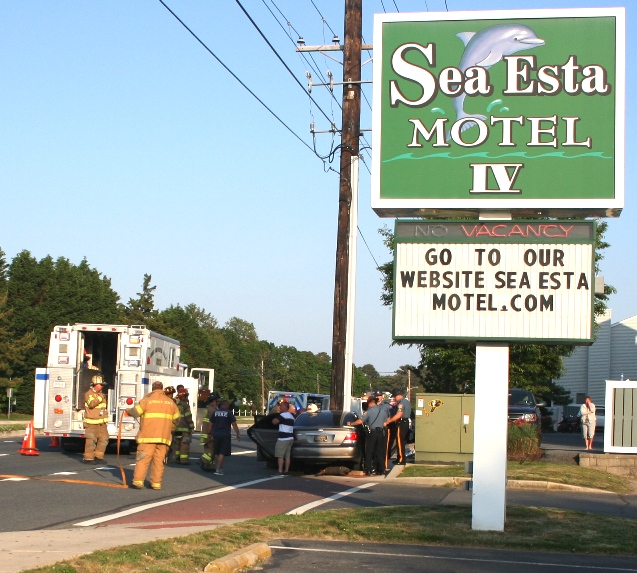 Rehoboth fire and EMS crews responded again on Saturday to another accident along the "forgotten mile" around 11:15 a.m. near Tidal Rave. Injuries were reported as minor.

The Save Our Lakes Alliance3 (SOLA3) is sponsoring its third workshop next Saturday (June 8) at 8:30 a.m.

The workshop is free and open to the public. The purpose is to provide information about how everyone plays an important role in protecting Rehoboth's three fresh water lakes: Lake Gerar, Silver Lake and Lake Comegys. 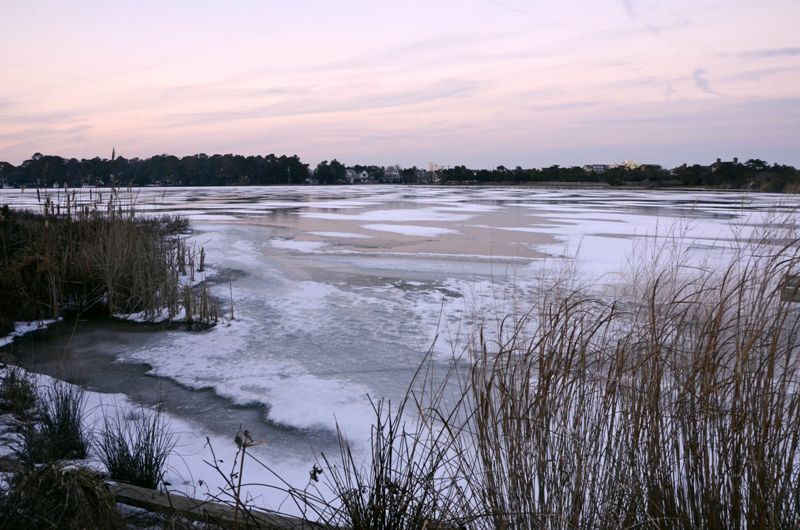 Representative Pete Schwartzkopf, who represents the Rehoboth area and is speaker of the Delaware House, is scheduled as the keynote speaker.

He will be joined by Frank Piorko, Division Director of Watershed Stewardship at Delaware's Department of Natural Resources and Environmental Control, who will address the state ownership of Silver Lake and Lake Comegys; as well as dredging efforts and maintaining Silver Lake water levels.

Todd Fritchman, an environmental scientist and Envirotech Consulting president, will give an ecological report card on the lakes. Rehoboth Beach Commissioner Patrick Gossett will discuss actions the city has taken or will take to protect Silver Lake and Lake Gerar. Sally Boswell, Education Outreach Coordinator for the Inland Bays, will present practical steps to improve the lakes.

An exhibition of "Art at the Lakes" will feature photographs created by award-winning photographer Peggy Douglas. These may be purchased with a portion of the proceeds donated to SOLA3. There will be a drawing for one of her photographs and for other prizes. 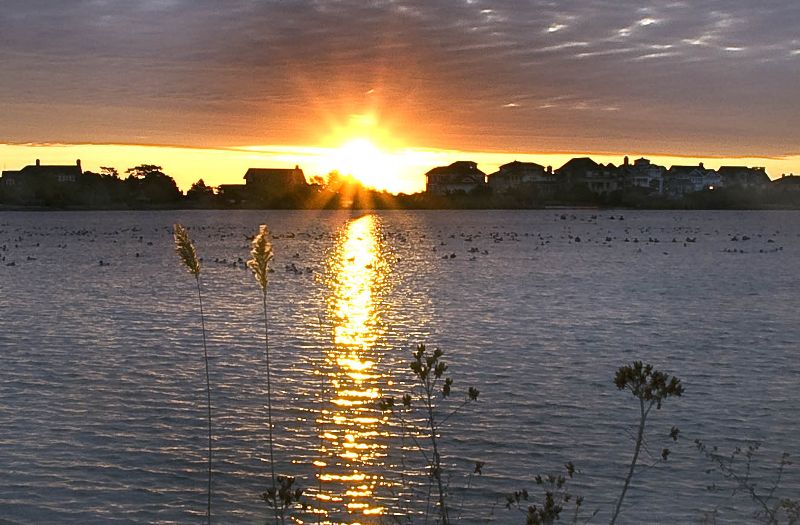 This workshop includes a continental breakfast and will take place at the Cape Henlopen Senior Center, 22 Christian Street, Rehoboth Beach, and will conclude about 12:30 p.m.

The City of Rehoboth has agreed that cars parked in the Senior Center parking lot and on Christian Street, between 2nd Street and Scarborough Avenue, from 8 a.m. to 1 p.m. will not have to feed the meters and will not be ticketed.

Attendance is limited to 70, so preregister at www.sola3.org/registration. On-site registration will be accepted, space permitting.

More of Peggy Douglas' work will appear at the Coastal Camera Club's annual Vineyard Photography Show at the Nassau Valley Vineyards in Lewes. The exhibition will be held June 1 through 30, Monday to Friday, 11 a.m. to 5 p.m.

Douglas and other artists will appear at a reception and discuss their photographic art on Sunday, June 9 from 2 to 4 p.m. Refreshments will be served, including Nassau Valley wines, and matted photos and cards will be for sale. 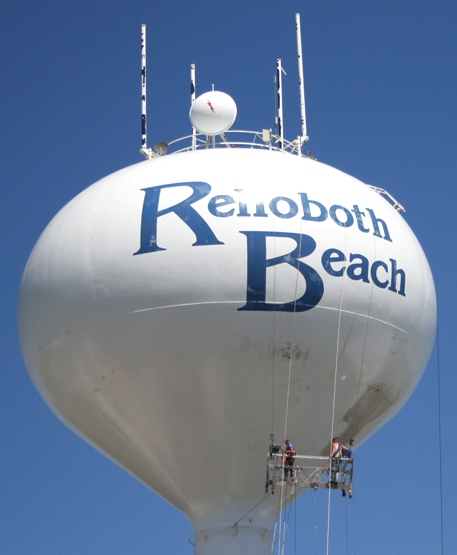 MILLS, SHARP ONLY PERSONS TO FILE FOR REHOBOTH COMMISSIONER SEATS--- There will be no municipal election this year in Rehoboth Beach since only two candidates have filed to run for the two commissioner seats. Incumbent Commissioner Stan Mills and Commissioner-elect Toni Sharp are the only two to have filed by the Saturday deadline. Commissioner Pat Coluzzi did not file to run for another term.

Commissioner Mills said "It is nice to be able to serve in office another term so I can continue working on projects I have had my fingers in, such as sidewalk improvements to meet accessibility compliance, alternate wastewater discharge, Lake Avenue improvements, municipal complex redesign and Boardwalk wayfinding signage."

"Also a priority on my list is to continue to seek ways to improve communications between the city government and the public; by example, a new website that will be easier to navigate and which will provide much more information including a section on background information supporting some agenda topics is in the works. Without having to campaign," Commissioner Mills continues, "I can focus my energy on these and other projects. I look forward to working with Commissioner-elect Toni Sharp and the other Commissioners on city business."

"I am thrilled to have a Commissioners seat after a very busy year of attending City meetings and becoming more familiar with how Rehoboth works," says Commissioner-elect Toni Sharp. "I have learned how important it is to build consensus in Rehoboth and to think long term when addressing solutions. I will bring my skills and talents to maintaining a quality way of life in our quiet and quaint community."

"Many issues face Rehoboth; traffic, safety, parking, beautification and growth," she says, "just to mention a few of the pressures we will face in the years to come. I am committed to working toward what is best for Rehoboth while balancing economic decisions and managing growth... I want to thank everyone who supported me and encouraged me to be a Commissioner. I am committed to doing the very best job possible for the City of Rehoboth."

PYGMY SPERM WHALE WASHES UP NEAR CAPE HENLOPEN--- A 10'5" pygmy sperm whale washed to shore Tuesday and was in the process of dying, says Suzanne Thurman, executive director of the MERR Institute. "She was a pregnant female [with a] heavy parasite load, and had not been feeding," Thurman said. "We will do subsequent testing to try to determine cause of death." MERR conducted the necropsy throughout the day on Tuesday where the whale came to shore at Cape Shores near the Cape Henlopen State Park. Preliminary results indicate that she had a heart abnormality and the severe parasite infestation.

VEHICLE CRASHES INTO BETHANY CAPRIOTTI'S--- A vehicle ran into the Capriotti's at 767 Garfield Parkway in Bethany Beach. A building inspector was requested to the scene but damage did not sound too serious. They did speak of erecting a replacement column. It was reported around 4:30 p.m. Thursday.

O.C. CONDO POOL OVERFLOWS, FLOODS--- Around 11:30 p.m. Saturday the swimming pool at the San Remo Condo at 54th Street in Ocean City started overflowing. Police responded when the pool's pump continued to run and flooded the surrounding area. Police were unable to locate the building management to turn off the pump. The O.C. water department, when contacted by radio, said that was not something "we get involved in," although the city could shut off the water to the entire building.