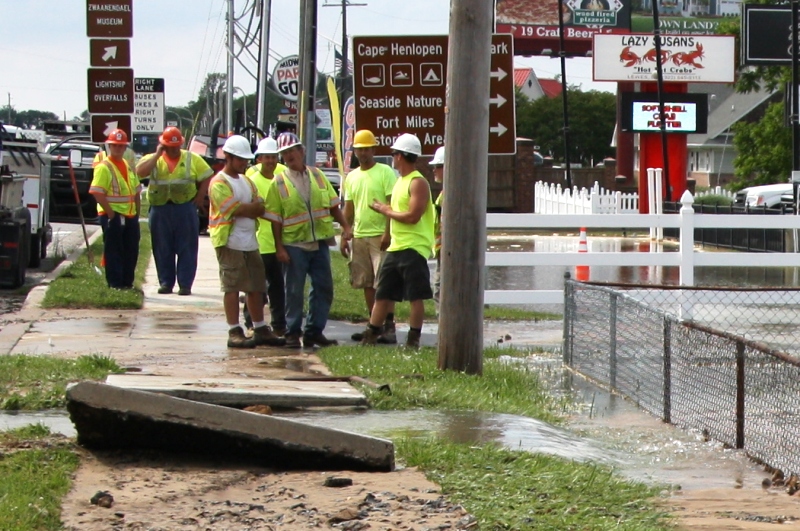 Various utility crews struggled to contain and later repair the busted main just south of Lazy Susan's. For hours water poured from the main into the parking lots and this home which reportedly has a basement. It is one of the few residential homes still left in the area. 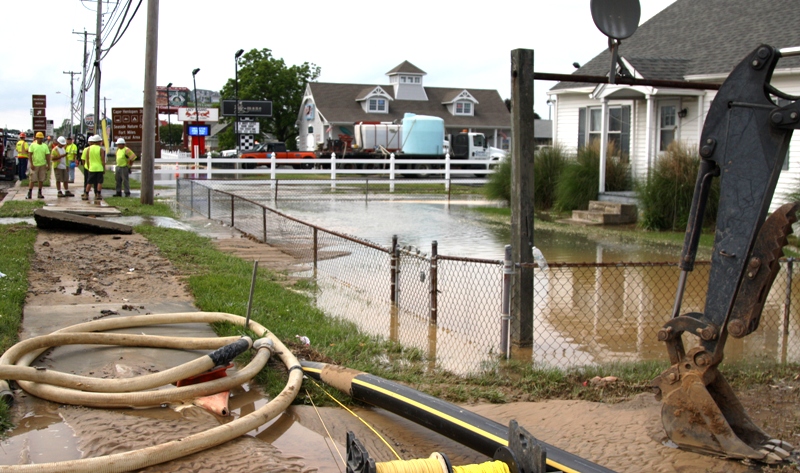 Missy Murphy, "Lazy Susan's" daughter, said the restaurant opened at 3 p.m. and the parking lot flooded around 3:15 p.m. Utility crews turned off water to the restaurant, forcing them to close for the night and send home the staff. This was especially frustrating since the restaurant just opened a new outdoor oyster bar. Typically they would close around 9 or 10 p.m. this time of year, she added. To make matters worse, repair crews later turned off electricity which spoiled food items stored in the frig. She is making an itemized list of damages and hopes to be reimbursed. The restaurant did reopen the following day.

EMS crews responded to Lewes Beach after beachgoers found a 69-year-old woman pulse-less on the beach at Georgia Avenue just before 5 p.m. Thursday. She apparently had been there alone for several hours and was pronounced dead at the scene. Lewes police officers searched the woman's white Saab which was parked close to her belongings.

As of Friday afternoon, Lewes Police Chief Thomas R. Spell said "the death appears natural, pending an autopsy. No signs of foul play or suspected drug activity are believed to be involved." Her body was turned over to the state medical examiner.

Officers issued the city's first $25 civil citation for a tent ordinance violation this past Thursday to a 36-year-old Maryland woman who had been previously warned. It happened around 10:45 a.m. off Maryland Avenue.

Police officers had given 43 verbal tent warnings over Memorial Day Weekend (7 a.m. May 26 through 7 a.m. May 30), says Lt. Jaime Riddle, Rehoboth Beach police spokesman. This does not include any warnings by lifeguards. 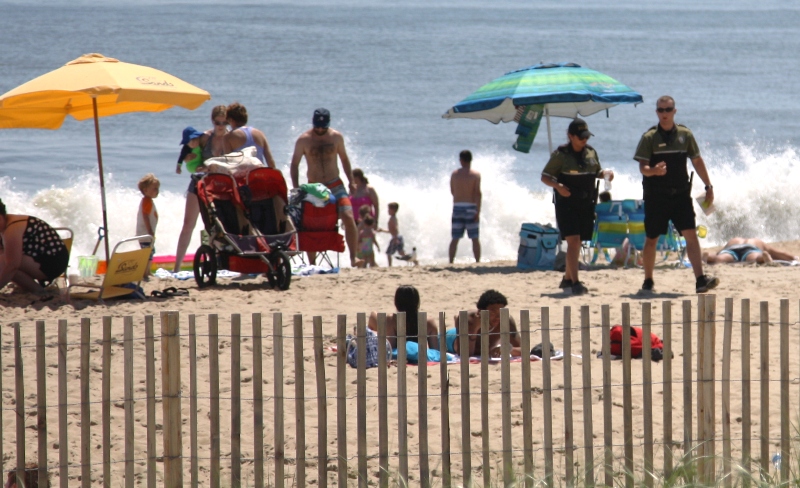 A couple sitting off Baltimore Avenue, above, had almost received the second civil citation but got lucky. Lifeguards had been allowing beachgoers to keep their tents up for the day but told them not to bring them back tomorrow, while police had been insisting they take them down immediately. So they got another warning after a computer check revealed that neither of them was wanted. And now the lifeguards have been instructed to insist that visitors take down their tents on first warning.

"There's lots of grass in Dewey Beach and we're not talking about the kind you smoke," says Diane Hanson, town commissioner and former mayor. "Dead beach grass has been washing up and the town is on its fifth dumpster," she said, "and it keeps coming in with the tide." 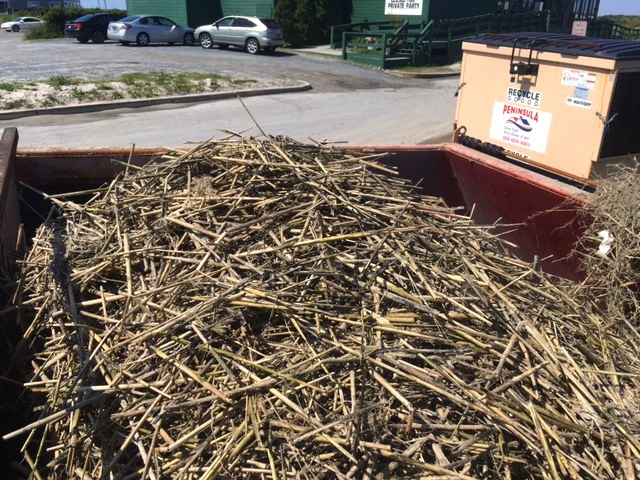 There was so much of it in fact, that when it first started approaching the coast, the Delaware State Police helicopter, Trooper 2, had been asked to try and determine what it was initially and where it originated. The helicopter crew described a rust-colored debris field concentrated off north Ocean City but it stretched at the time all the way to Bethany.

Ocean City appears to have the heaviest concentration of it, he observed, and South Bethany reports this was the worst the town has ever seen.

See this Maryland Coast Dispatch article for a detailed report on the marsh grass invasion.

Delaware State Police have identified the driver of this 2015 Porsche 911 who bit a state trooper on Memorial Day as Paul M. Caputo, 56, of Manalapan, New Jersey.

Caputo, says Master Corporal Gary E. Fournier, state police spokesman, had been involved in a couple of hit-and-run accidents on Coastal Highway with no injuries.

According to police, Caputo was driving the Porsche northbound on Coastal Highway in the left lane approaching the limits of Dewey when he struck the front left of a northbound 2016 Hyundai Sonata traveling in the right lane.

The Porsche continued without stopping, police said. A few minutes later, police received another report that the Porsche had now struck a southbound 2014 Mercedes-Benz south of the Indian River Inlet bridge and failed to stop yet again.

Minutes later, police found the Porsche parked along side of the road where Caputo was taken into custody. Upon arriving at Troop 7 in Lewes, MCpl. Fournier says Caputo was being removed from the patrol vehicle when he bit a trooper's hand causing them both to fall to the ground.

Caputo was charged with DUI and other traffic offenses including leaving the scene of a property damage collision as well as assault on a law enforcement officer. He was arraigned at Justice of the Peace Court #3 and released on $4,550 unsecured bond. His Porsche was impounded.

"It was a brand new fidget toy, a hand spinner that was bright pink and when the next costumer came to the register, I noticed that it was missing as we keep samples out for customers to try," says Jeff Balk, owner of Snyder's Candy. Without surveillance video, it would have been nearly impossible to determine what happened to it. 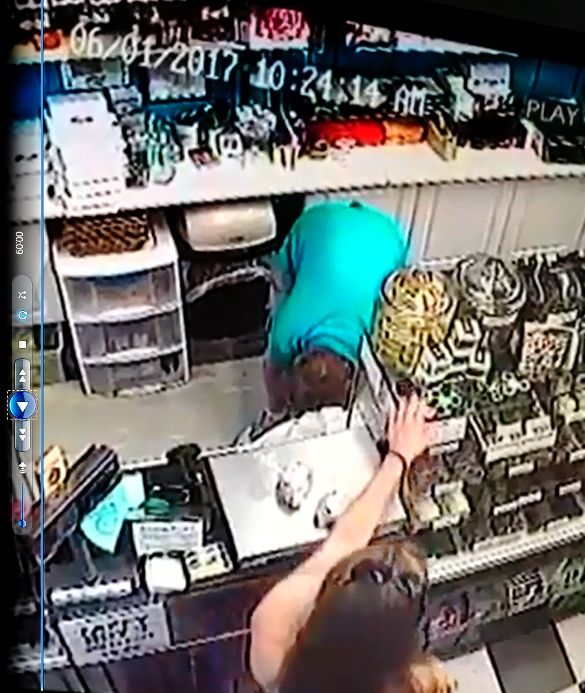 But Balk was ready, and perhaps a bit surprised, when the shoplifter returned to his shop some 90 minutes later as he was reviewing this video which showed the theft this past Wednesday. "I told her to return what she stole," he said, but "she denied stealing and then I showed her the monitor with her stealing. She went outside and got the item from her daughter." She then returned it but quickly left.

"We notified neighboring stores and showed them the photo of her," he added. "Two stores recognized that she had been in earlier." Police reviewed the surveillance video to compile a suspect description that was then broadcast to other officers. As a result, police found and arrested her an hour later.

"We found that placing the cameras and monitor in noticeable locations help [to deter shoplifting]," Balk says. "We've had many people walk in the store, their eyes immediately look up and around, and as soon as they see a camera, they leave. Fortunately shoplifting is not a big problem, the cameras aid in proving that someone actually stole and supply undeniable evidence for the police. We then show the photos from the video, of the alleged thieves, to neighboring businesses," he added.

Police say she was charged with shoplifting (no charges for child endangerment).

State police and Lewes firefighters responded to two motorcycle crashes Friday in the area of Red Mill Pond on Coastal Highway. The first was the most serious, when a 20-year-old male crashed his motorcycle at high speed and was thrown about 20 to 30 feet near Red Fox Lane just before 4:30 p.m. He was still alert, but rescuers were going to fly him to Christiana Hospital because it was a high-speed, high-impact crash. They ended up taking him by ground to Beebe because of medical complications. 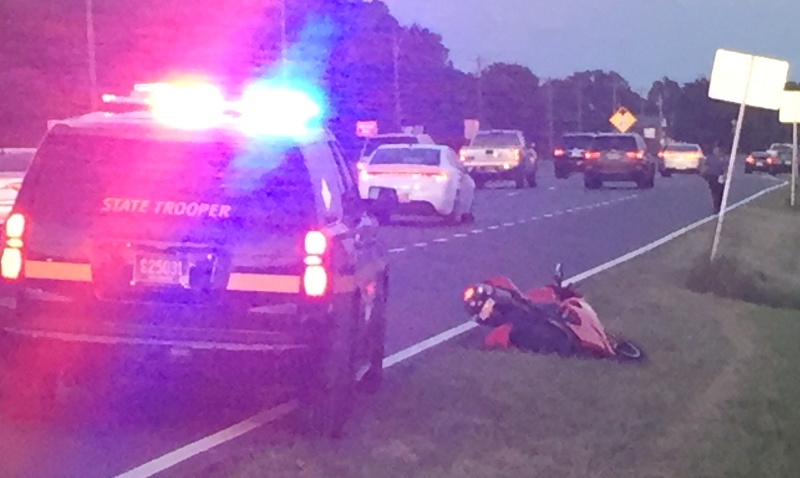 Just before 8 p.m., the 44-year-old man on this red motorcycle, above, wrecked in the area of Minos Conaway Road. He reportedly rear-ended another vehicle at about 45 m.p.h. and fell to the ground. He wore a helmet and never lost consciousness. He was also taken to Beebe Hospital. No word from police yet on charges, if any.

A resident in the ocean block of Columbia Avenue called for help around 6:20 p.m. Saturday to remove this cat that had been stuck on the roof for two days. 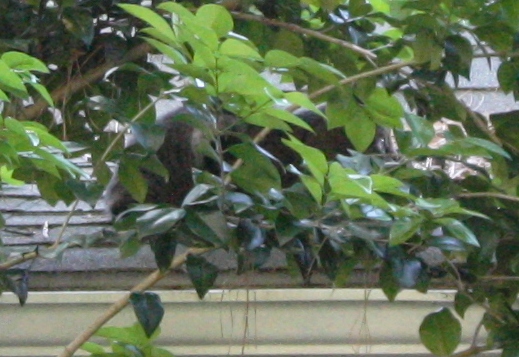 One fireman used a homeowner's stepladder to get access to the roof, but the cat was rather shy and kept running away from rescuers. 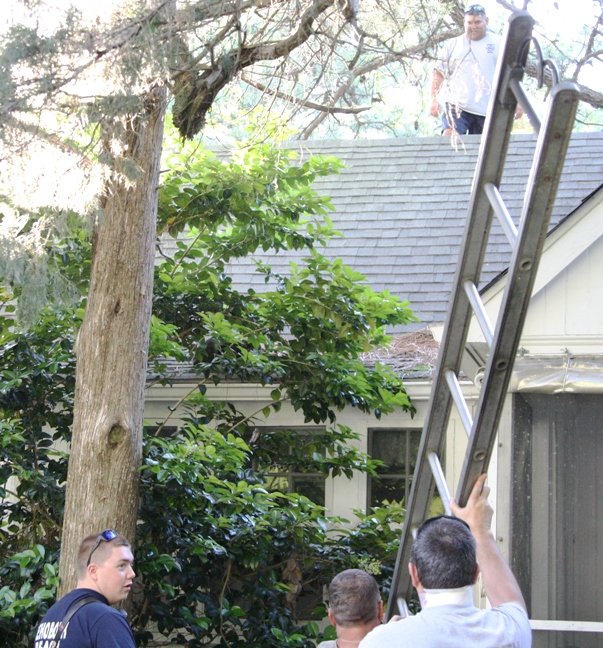 As they placed a second ladder on the front of the house, the cat took a giant leap from the roof and ran off through a neighbor's yard.

"I thought it was both sweet and interesting to see how the goose couple sticks together when they have their babies," says Peggy Douglas. "This couple has been keeping a very close eye on their offspring both in and out of the water at Lake Comegys. And apparently they have also been seen on Silver Lake - always as a family." 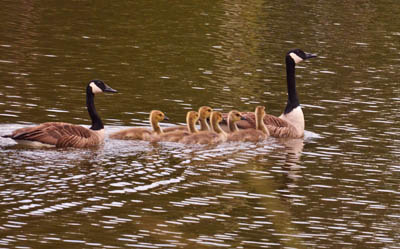 CAPE MAY LIGHTHOUSE FROM REHOBOTH BEACH ON SATURDAY

REHOBOTH AREA SALONS GET BOMB EXTORTION THREATS VIA WIRELESS PRINTERS--- Last Monday and Tuesday, two hair salons in the Rehoboth area received bomb threat/extortion messages printed on their wireless printers. The letter demanded money by a certain date or else! "This is an active and on-going investigation in which we are working with federal authorities," says Master Corporal Gary E. Fournier, state police spokesman. "This was not a localized event as it occurred throughout the United States and has been deemed a nuisance threat."

Odd that two hair salons received the threatening note in the Rehoboth area, but nationwide, other businesses have received the message as reported by The Daily Independent, The Sentinel Echo, and even Reddit.

SEARCH FOR FUEL SPILL ON LEWES-REHOBOTH CANAL--- Lewes firefighters, DNREC and the Coast Guard had trouble locating a suspected fuel spill on the Lewes-Rehoboth Canal in the area of the University of Delaware. The fuel odor was reported around 3:50 p.m. Friday.

DEADLINE TO FILE TO RUN FOR R.B. COMMISSIONER/MAYOR IS TODAY AT 4:30 P.M.--- It is not too late to file a petition to run for mayor or commissioner in Rehoboth Beach. But the petition must be submitted by 4:30 p.m. today. Check WGMD.com later today for names of those who filed to run. So far, Susan Gay, incumbent Comm. Kathy McGuiness and Lisa Schlosser have filed for the two commissioner seats. Comm. Lorraine Zellers is reported to be not seeking reelection. As for mayor, so far, only Mayor Samuel R. Cooper has volunteered for what will be his 10th term. To be eligible to vote on August 12, 2017, you must register, if not already registered, on or before July 13, 2017.

Boy seriously injured in crash on U.S. 113 between Georgetown and Ellendale (9:25 a.m. Saturday)

Running of the Bull in Dewey Beach set for June 24

This report is being e-mailed to 1,991 recipients. Thanks for your support!