Having trouble viewing this report or its photos? CLICK HERE! Please e-mail TIPS/photos to: alan@henney.com 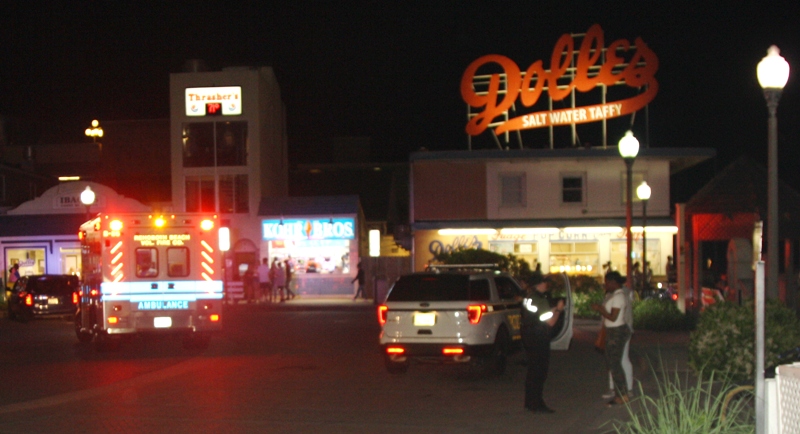 Officers spent more than an hour trying to locate the four suspects, described as males in their late teens or early 20's. An officer possibly spotted a couple of them running through yards near the intersection of Laurel and Hickman streets about 10 minutes after the initial report, but they got away. That area became the focus of the search.

The 18-year-old stabbing victim, who had made his way to Rehoboth Avenue, was conscious when he was taken to the hospital by EMS. He had a wound to his abdomen.

Late Sunday night police released this image from a cell phone camera showing the suspect who had the knife and two of the accomplices. 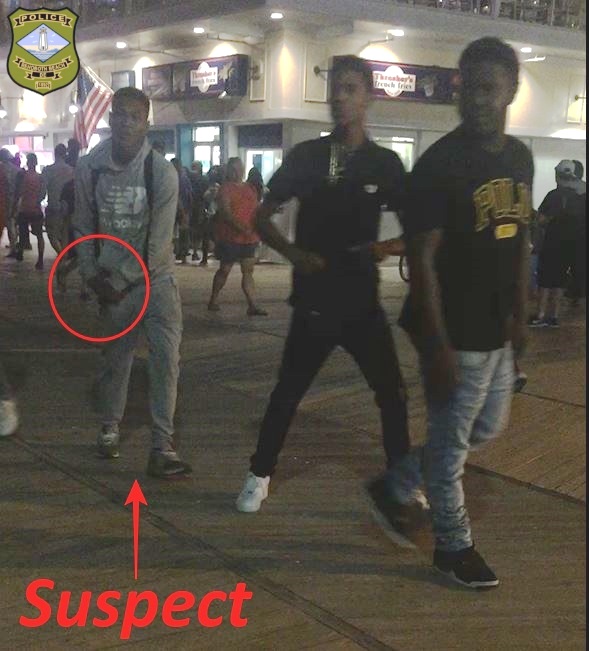 Anyone who witnessed the incident and/or who can provide any information as to the identity and/or location of the male suspect and/or any of the accomplices is asked to please contact Det. Tyler Whitman at (302) 524-1391 or submit a tip through Delaware Crime Stoppers by calling 1-800-847-3333 or online at http://delaware.crimestoppersweb.com.

Friday's Cape Gazette reported that Commissioners Stan Mills and Toni Sharp -- whose terms would expire this year -- have both decided not to seek re-election. That has left the field wide open for new candidates.

Suzanne Goode became the first to file a petition last Wednesday. She was followed by Mark Betchkal who filed on Saturday. He said he wanted to assure that there are at least three candidates running so there would be an election. Gary Glass, who ran last summer for commissioner, says he will file his petition today.

Other persons said to be considering a run include Edward Chrzanowski, Charles Garlow, Jan Konesey and Rick Perry. Attempts to get them to confirm were unsuccessful.

Candidates seeking to run for commissioner must submit their petitions by 4:30 p.m. today. To be eligible to vote on August 10, you must register on or before July 11, 2019. See the city website for info.

Please check WGMD and WGMD.com for the updates later today!

Police were called to the ocean block of Rehoboth Avenue this past Friday evening after a restaurant deliveryman reportedly exchanged words with a parking enforcement officer who accused him of double parking and not paying the meter. In his defense, the man said delivery trucks were allowed to park frequently blocking a lane of traffic and often parked cars. 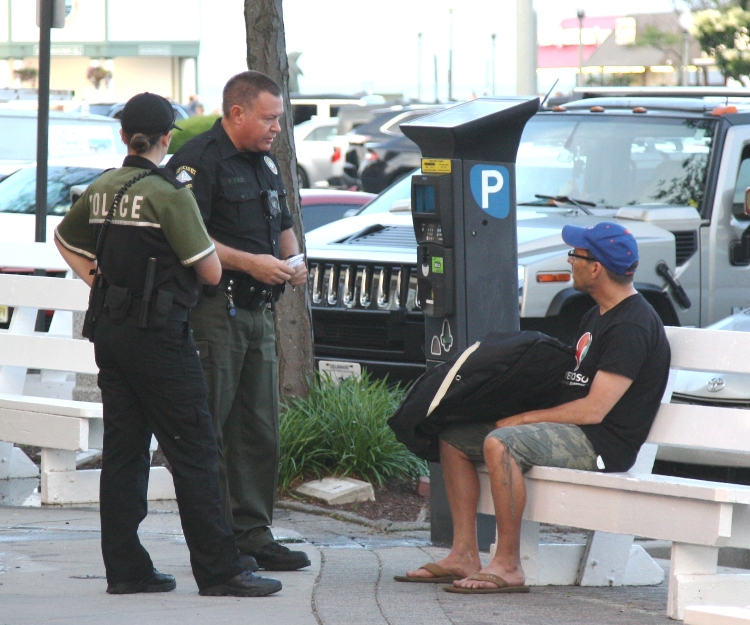 But Sgt. Scott O'Bier explained that his car was not a commercial vehicle and he would need to pay for parking. Sgt. O'Bier also added that the deliveryman could talk with the city manager.

Sgt. Scott O'Bier (that's him in the back) and four other officers pulled a city bench from the surf and returned it to the proper spot on the Rehoboth Beach boardwalk. One of the officers discovered the bench in the surf in front of the Star of the Sea around 11:15 p.m. this past Friday. 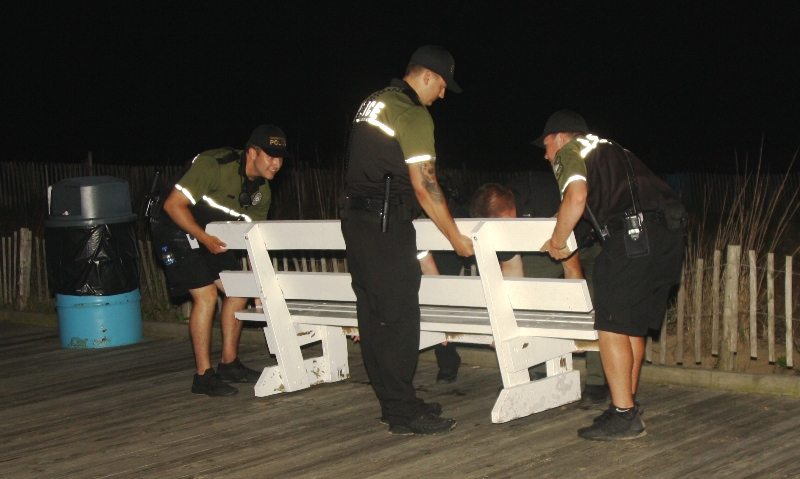 The five of them carried the bench back to where it was removed.

As storms rolled over Rehoboth twice this past week, police and fire crews dealt with arcing or downed power lines.

The first was reported around 9:40 p.m. this past Wednesday in the third block of Hickman Street during the thunderstorm. That is where officials found a small fire coming from the top power line that was threatening a tree and house. A Delmarva Power crew arrived to fix the problem before it was able to spread to the nearby homes. 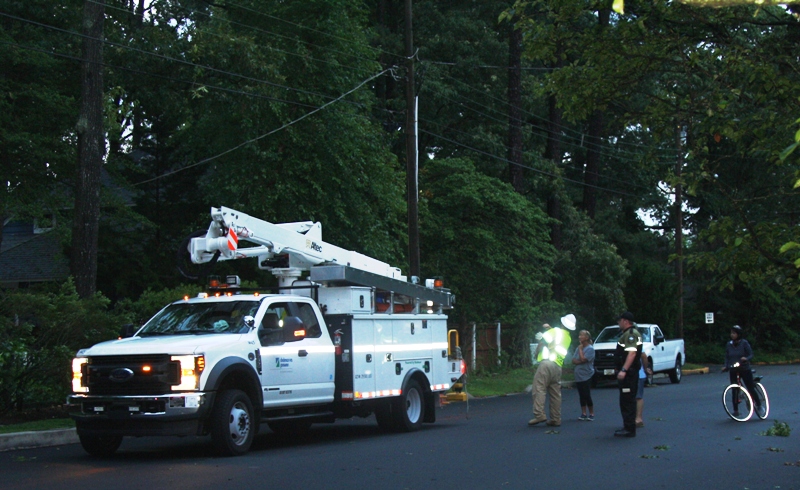 Power went out for several customers in the second block of Columbia Avenue this past Thursday. Around 7 p.m. officers responded here to block traffic until Delmarva Power could repair the downed power line.

Local drone photographer, Elliot MacGuire, has been capturing incredible images and video with his DJI Mavic 2 Pro. MacGuire, who lives in Rehoboth and grew up here, provides services for hire using his drone.

His work includes real estate projects, weddings, helping businesses show off their location, 3-D mapping and tracking progress for construction sites. "The drone lets you show things off from an angle not usually seen so it helps in all kinds of ways," MacGuire notes. 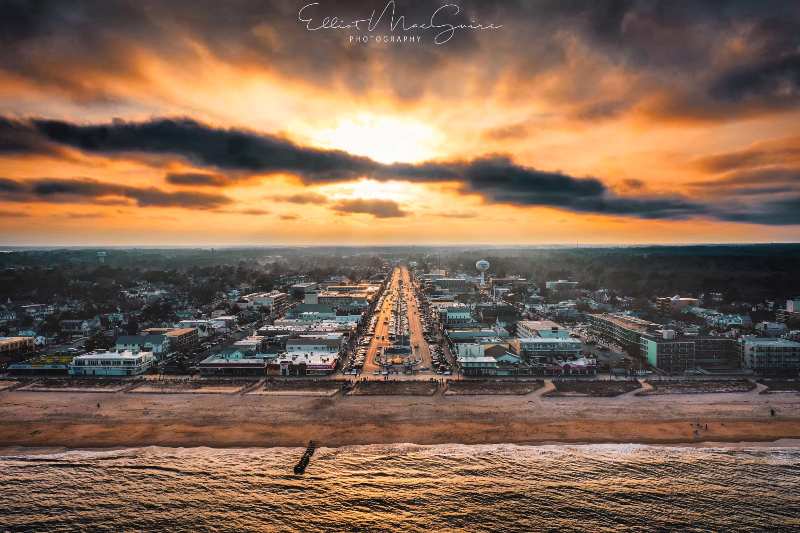 He recently upgraded from a smaller drone, the DJI Spark. "It was a great drone to learn on but with this new drone I can finally take the pictures I've been thinking of," he said. MacGuire points out that his photos are not "Photoshopped," but he does use Adobe Lightroom to adjust the saturation. 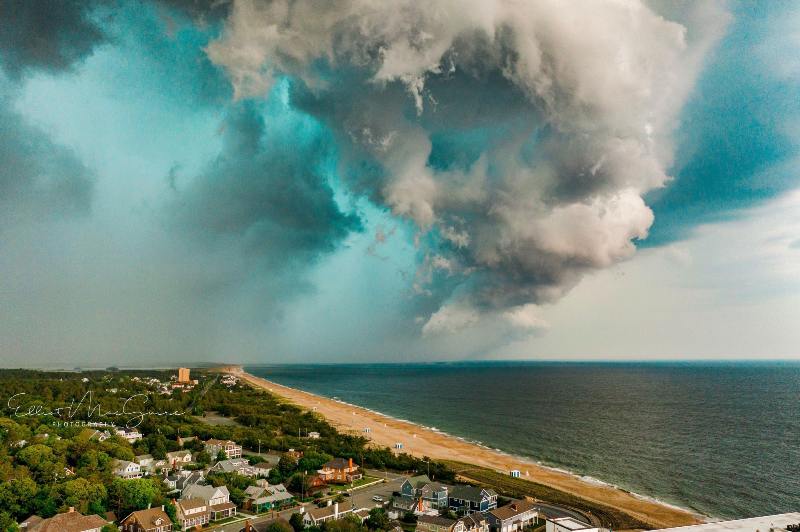 These incredible photos were from last week's thunderstorms that past over Rehoboth. Also see the series he has posted covering Rehoboth Beach on his Facebook page, Elliot MacGuire Photography. 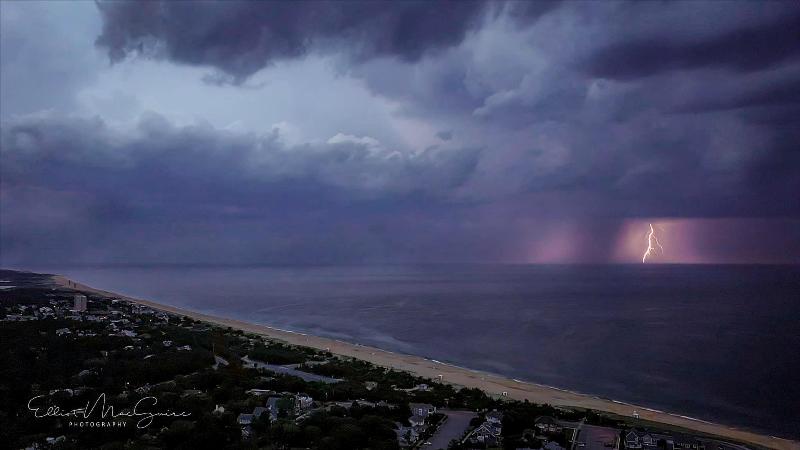 Mineral Instincts opened this past Saturday at the Heidi Lowe Gallery in downtown Rehoboth. It features hand-crafted jewelry works of Anna Johnson and Aimee Petkus. Petkus, on the left, attended the opening with Heidi Lowe. 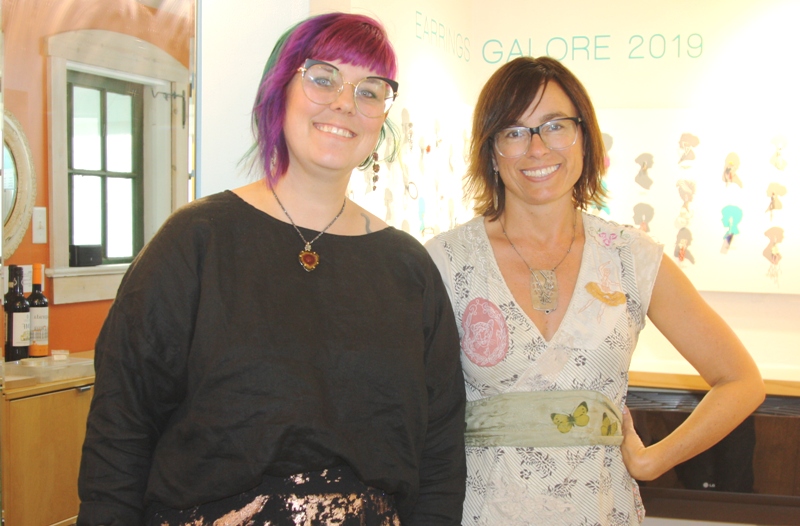 Petkus is a trained geologist from Philadelphia who grew up collecting rocks and minerals in Colorado. She usually works with natural stones and sterling silver with a little bit of gold mixed in. 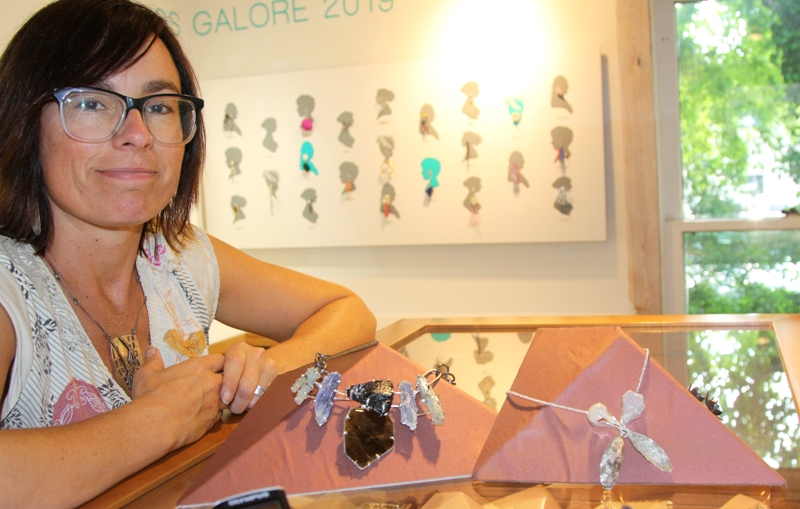 Their work will be on display through June 30.

Lowe is continuing her "Make your own ring!" classes on Wednesdays this summer. Those are silver. But this summer she is also offering classes for those who want to design their own wedding bands from gold, palladium or platinum. See her website for info.

SURF-SAIL-SEA OPENS AT THE PINES

The Pines, which has one of Rehoboth's newest art venues, opened the Surf-Sail-Sea photography exhibition this past Saturday featuring the works of Sean Kelley and Brian White. Joining them at the opening was Jota Aretxabata, a graphic designer from Spain who created the show's logo. 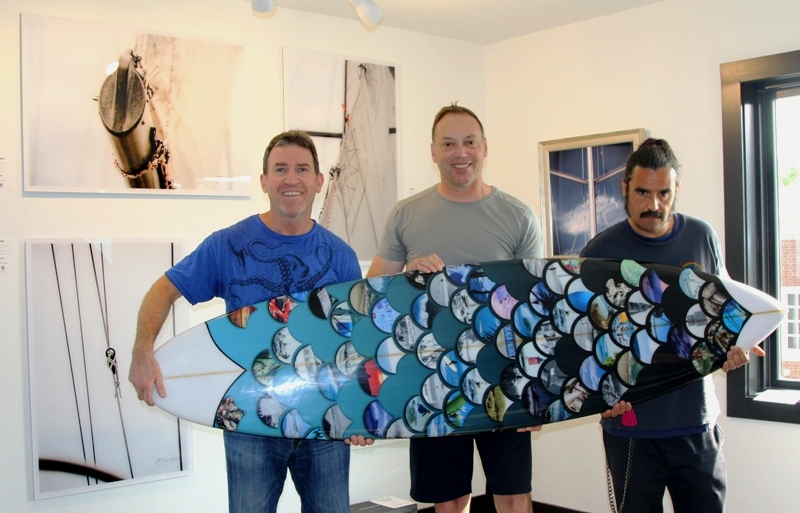 Brian White says he likes working in metal, acrylic, acrylic glass and trying to do unique presentations. He takes many of his photos while out "crewing" from the Lewes Yacht Club. "When you see a lot of this stuff, hopefully the energy of what's going on in the boat is actually being communicated, because they are not static shots... like at the dock!" he pointed out.

He noted how his work shared commonalities with Kelley's. 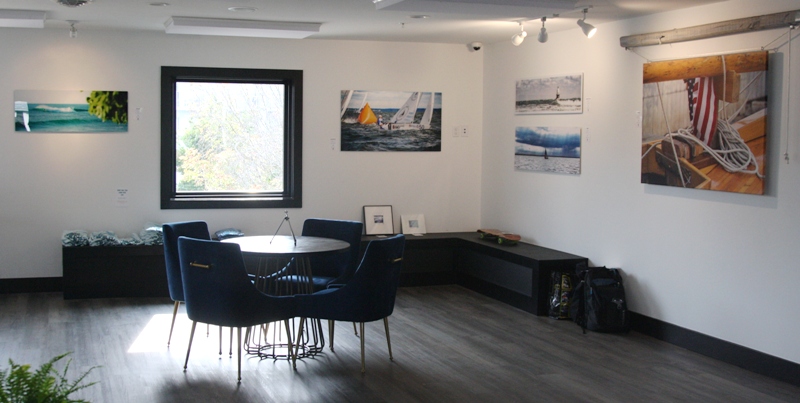 Kelley says he "hopes people come out and see the pictures and hopes they are inspired by the pictures to get off the couch and actually go to the places we have been... hopefully we will inspire them to do that!"

Their works will be on display at The Pines through June 16.

MOURNING THE LOSS OF JOANNE DeFIORE

Friends and family celebrated the life of Joanne DeFiore this past Friday at St. Edmond Catholic Church. As an artist, author and jewelry designer herself, she had been a supporter of the arts and artists in Rehoboth, including this weekly report. This is a huge loss for Rehoboth Beach. 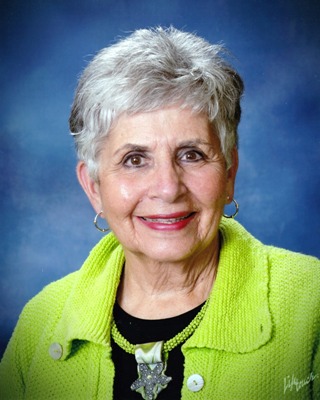 Please remember her and her family. More info is in the Cape Gazette.

The Rehoboth Beach Museum welcomes back Michael Morgan with his newest book, Deadly Storms of the Delmarva Coast, for a book signing and a presentation, Storms and the Cape Henlopen Lighthouse on June 6. 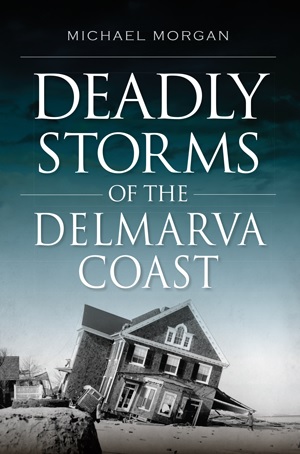 Morgan's latest book is about the vulnerability of coastal Delaware, Maryland and Virginia to storms and storm-driven shipwrecks. Since the early 19th century, storms have led to drastic changes to our shorelines. He narrates the stories of these storms and reminds us of the power of wind and water. Morgan will also explain how storms contributed to the demise of the Cape Henlopen Lighthouse which fell into the sea in 1926.

Morgan has been writing articles on the history of Coastal Delaware for more than 30 years. His columns appear weekly in the Delaware Coast Press and the Wave, and his "Lore of Delmarva" weekly radio commentary is broadcast by WGMD!

Space may be limited so reservations are required. Please call (302) 227-7310 to ensure your space. The program is free for members. A $5 donation is suggested for non-members. Further information on this and other programs of interest can be found on the museum website. 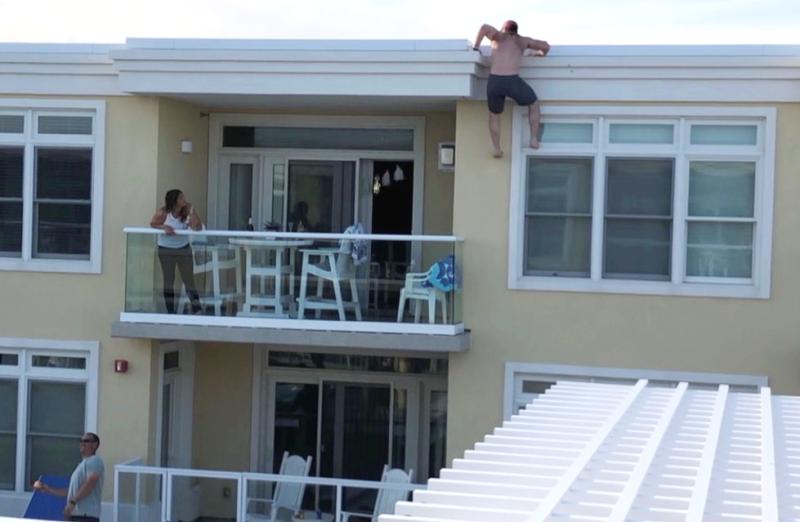 FIRST DEAD SEA TURTLE OF THE SEASON--- Suzanne Thurman, MERR Institute executive director, said her organization investigated its first sea turtle death of the 2019 season. This was a sub-adult loggerhead found off Port Mahon. It was still in the water, she said, with no obvious signs of death. MERR will recognize World Oceans Day next Saturday.

MEN ARRESTED AFTER THEY DESTROY PUNCHING-BAG ARCADE MACHINE--- Rehoboth Beach police arrested two men for smashing the "boxer" (punching machine) at Zelky's Beach Arcade-South this past Saturday night as police were investigating the stabbing. They broke through the fiberglass body and Plexiglas display, says Matt Weiner, whose family owns the three Zelky's arcades on the Rehoboth boardwalk. The machine appears to be a total loss, he added.

Weiner said he went out to look for the suspects himself because the police were tied up on the stabbing. As he rode up Rehoboth Avenue on his scooter, he spotted the culprits walking along the street. He said that Sgt. Scott O'Bier happened to be in the area in his police car, so after he let him know, the two were arrested. They both appeared to be drunk.

7 great beaches to hit in the D.C. region

Dead dolphins are washing up in Delaware — here's what we know

Rise Up has Risen!

Bone found on Rehoboth Beach; can anybody ID?

We had a real life weekend at Bernie's Situation at Dewey over the weekend?

This report is being emailed to 2,286 recipients. Thanks for your support!