Having trouble viewing this report or its photos? Click here: http://henney.com/weekend03/

A Russian-speaking female bicyclist suffered serious injuries after she was struck on Coastal Highway at Old Landing Road. The accident was reported around 5:10 p.m. Saturday in the intersection of the southbound lanes.

Initial reports suggested it was a hit-&-run accident, but troopers soon located the driver of the striking vehicle. The bicyclist suffered a serious head injury with cerebrospinal fluid and blood coming from her ear. She wore no helmet.

The state police helicopter landed at the former Pep-Up lot across from the Rehoboth Mall. That is where EMS personnel brought her and prepared her for a flight to Christiana Hospital. 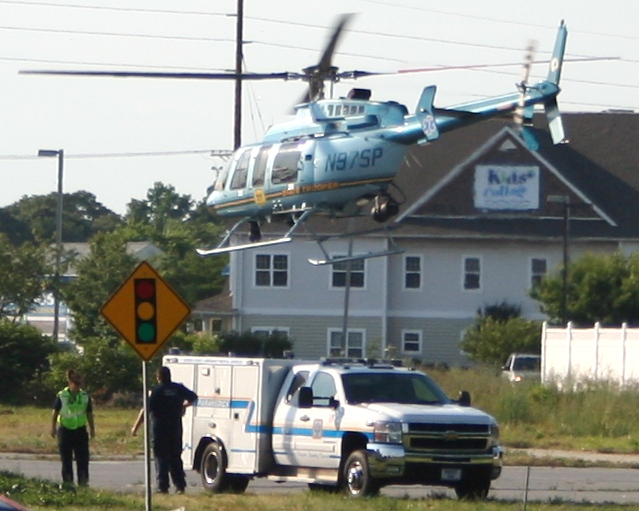 Troopers and fire-police closed the two right-most lanes of Coastal Highway prior to Old Landing Road while investigating the accident. The bicyclist had been riding a bike with a "Property of LRAC" (Lewes Rehoboth Association of Churches) label. LRAC has been providing assistance to foreign exchange students in addition to local residents. 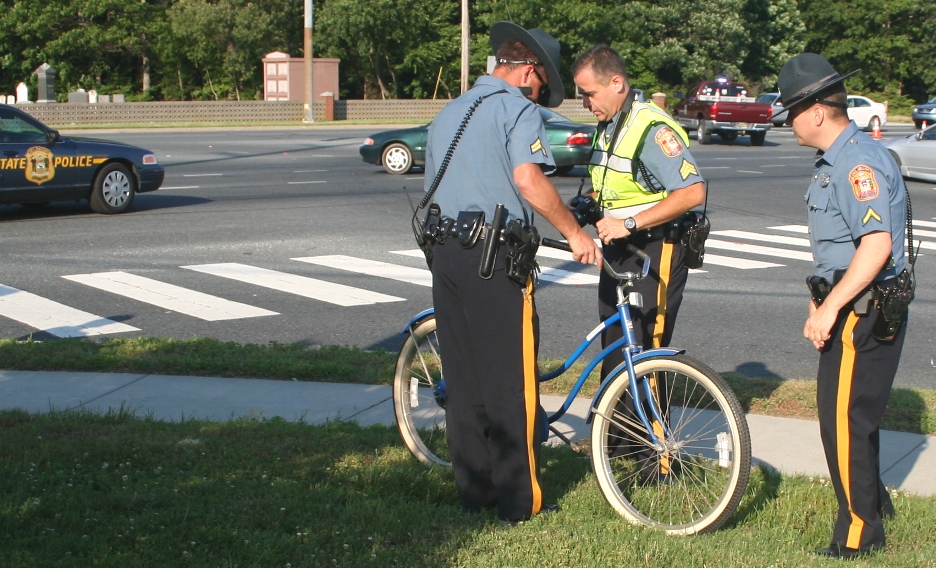 On Sunday, a 33-year-old man was also struck while riding a bicycle along Coastal Highway in the parking lot near the Roadhouse at the Midway Shopping Center around 3:15 p.m. He suffered a serious pelvic injury. He was taken to Beebe Hospital.

Locals are critiquing how well Dewey Beach has weathered June bug season. This past week was anticipated to be the peak week for the graduating Delaware high school seniors. In past years, the teens, dubbed "June bugs," packed Dewey Beach days after their graduations, but were limited as to what they could do since they were all under 21.

Dewey Beach Mayor Diane Hanson said "It is a little quieter this [past] week with June bugs -- probably from the efforts of our police going to the high schools to warn kids and parents of the inherent dangers of beach week." However, she added that Friday night into Saturday "was anything but quiet. It's a very busy weekend as far as I can see."

On Friday, Sgt. Clifford Dempsey, Dewey Beach police spokesman, said June bug week has so far been uneventful with "few incidents and no major crimes that panned out into anything." He said he does not yet have the stats for comparison with previous years.

He says the department reached out to almost every graduating senior in New Castle County this past spring, as well as those in the affluent Montgomery County, Maryland schools. The police visited the schools and warned parents and students of the dangers of "senior week." He says he thinks they are getting the message. He noted that police have had fewer "disorderly dwelling" complaints. The teens, he said, appear to be scared to participate in house parties which have resulted in mass arrests in past years. So he is seeing more grads who are in town congregating along the streets. "Our warnings are being heeded" he added. "We do not play around. It is not a summer camp."

Kelly Ranieri, Dewey Business Partnership executive director and founder of the "Dewin' It Right" campaign, said June bug attendance at her events was down this year over last year. But she said fewer grads appear to have come to Dewey Beach and the police seminars may be the reason.

Down in Ocean City, it's a different world. Donna Greenwood, who chairs the Ocean City Drug and Alcohol Abuse Prevention Committee, which oversees the "Play it Safe" program, says "This past week we saw a lot of kids at our 'Play it Safe' events." She does not yet have all of the stats yet but she estimated "that we have had 3500 to 4000 grads from talk I heard during the week."

Greenwood noted that June 9 to 16 is supposed to be the peak June bug week according to the O.C. hotels and motels. Jessica Waters, police spokeswoman, says this past week has been typical for June bug season.

The National Weather Service warned about the potential for coastal flooding Tuesday, and hours later, the bayside of Read Avenue became flooded under about 6 to 9 inches as the tide rose. 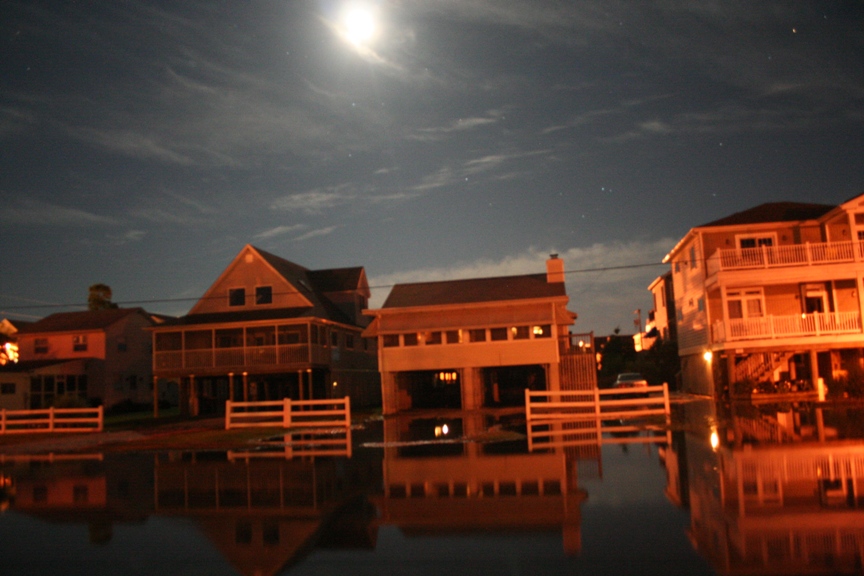 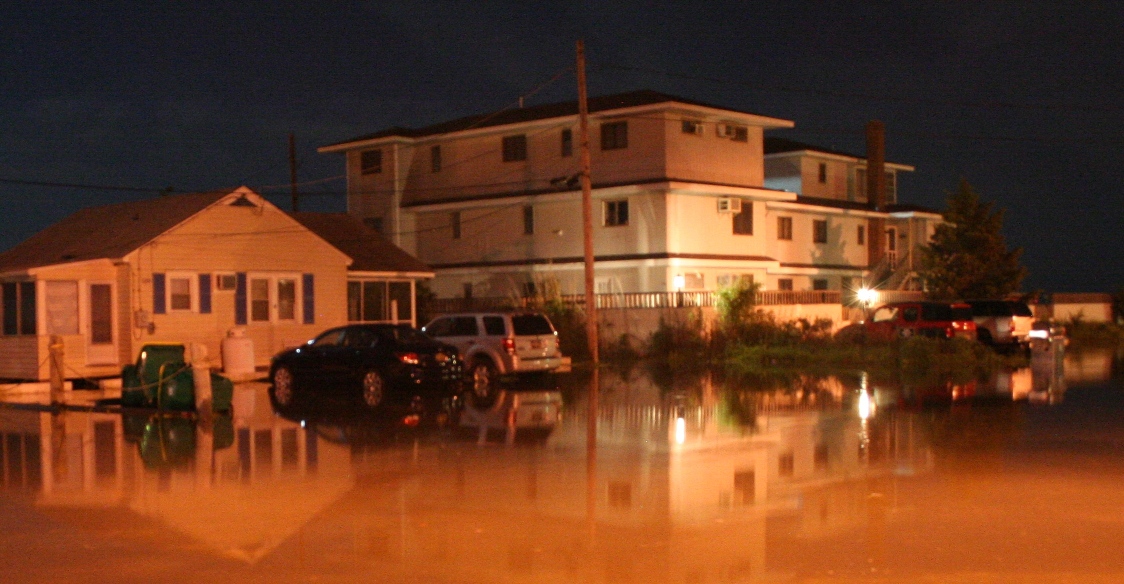 We now know more about what the DTS van had been doing in Dewey Beach last week.

"I can confirm," says Robert B. King, DelDOT spokesman, "that the Data Transfer Solutions Mobile Asset Collection Van was collecting street data for the Delaware Department of Transportation in the Dewey Beach area on Saturday June 3, Sunday June 4, and Monday June 5." 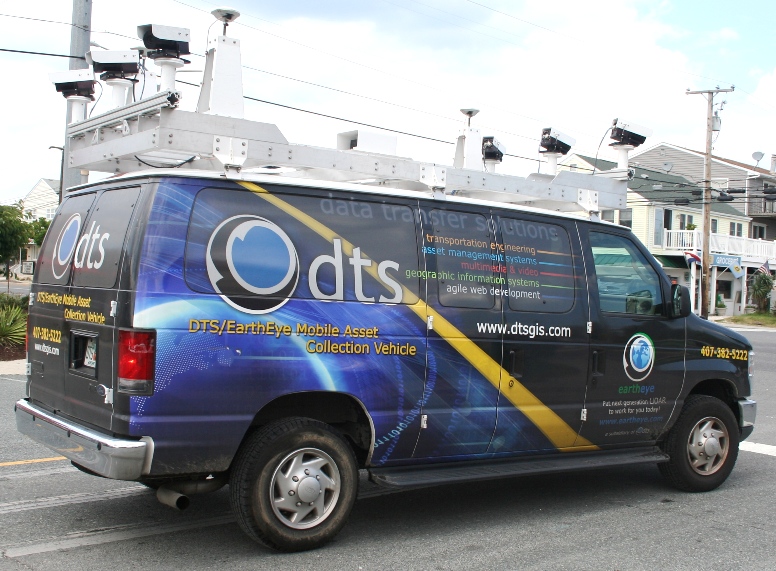 The project's purpose King said "is collecting pavement condition data and videolog of all state-maintained roadways (including state-maintained suburban streets), approximately 5,881 centerline miles. They collect some of the condition data through automated equipment on the van, such as lasers. The additional information is captured by video and then analyzed in the office by their technicians. This provides us the condition data we use to manage the road network and select candidates for rehabilitation."

King says the estimate for completing this project is approximately $950,000.

There is a new art gallery on the Rehoboth Beach Mosaic ARTwalk this season and it is another classy addition to the growing art-row on Baltimore Avenue. Anita Peghini-Räber, a Swiss-American artist, known in New York and Washington, D.C. as well as Rehoboth Beach, decided to start her own gallery.

She says the galleries typically charge artists significant amounts for the exhibitions and receptions. The big city galleries take as much as 80 percent. So she decided it was time to invest in her own gallery. In addition to her own work, she exhibits artworks from about 30 artists. She is enjoying her work and it shows. 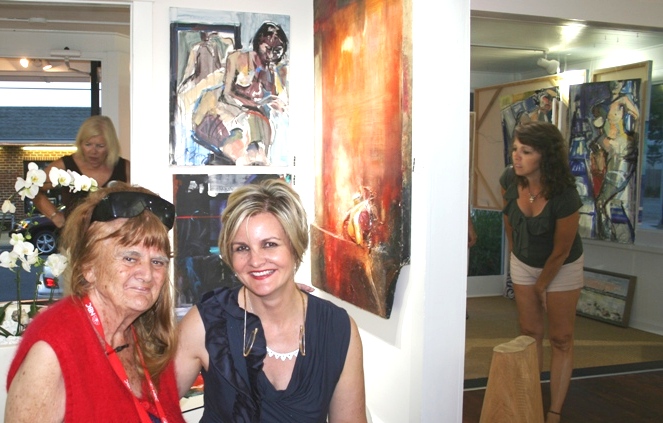 Anita says great art can hang with any great art, regardless of style. The art flows throughout the building unleashing a synergy of emotion and continuous dialog.

Look at her Website or visit her studio at 49 Baltimore Avenue in downtown Rehoboth Beach.

Next to Anita's new studio, is the Philip Morton Gallery. Eric Davison, director of the gallery, has another exciting season planned and more exquisite glass work coming soon. In addition to paintings, the classy gallery is known for its fine glass, sculpture and mixed media.

One of the recent artists he is featuring is Marian Osher. She has a series of 10 beach life scenes on exhibition. They are mixed media acrylic painting and photo collages on canvas. Marian says she likes to take generic photos of people on the beach. They each have their own story of who, why and what they are. She takes the photos, applies paint and actual beach sand giving the work a unique texture and beach feel and she likes to extend the work to the frame's edges. She too has exhibitions in New York and Washington, D.C. Check her Website or look at her work -- and much more -- in person at the Philip Morton Gallery, 47 Baltimore Avenue. 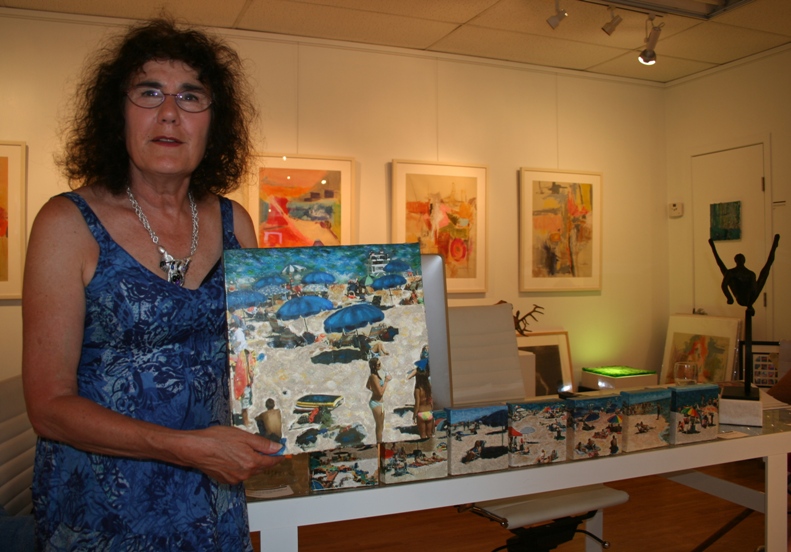 BLACKMAN FIGHTING BACK FROM CANCER, HEADED TO THE WHITE HOUSE!

Cheryl Blackman appears to be on the mend, having survived breast cancer and chemo. She is happy to report she is feeling strong and her hair continues to grow back.

Over the winter, she received the 2011 Governor's Outstanding Volunteer Award. She is also a 2012 Local Jefferson Award Winner, nominated for her public service. She is Delaware's nominee for the Jacqueline Kennedy Onassis award for outstanding public service benefiting local communities. She says she will be headed to Washington, D.C. to meet the President on June 18-20 for the award ceremony. 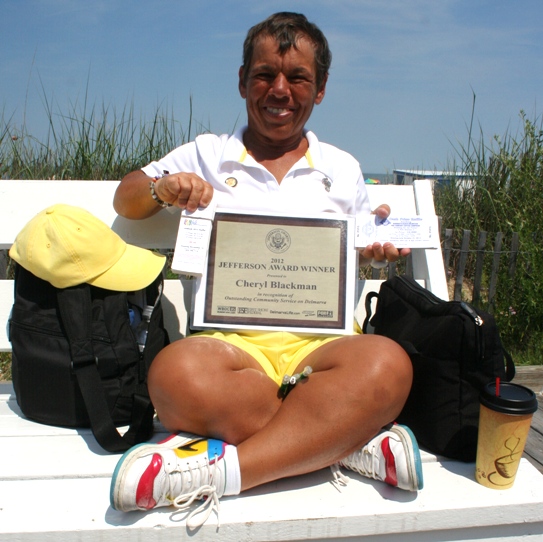 She still works too at Grotto's on Rehoboth Avenue!

Here is the story WBOC-TV aired on her in April when she became a Jefferson Award Winner. 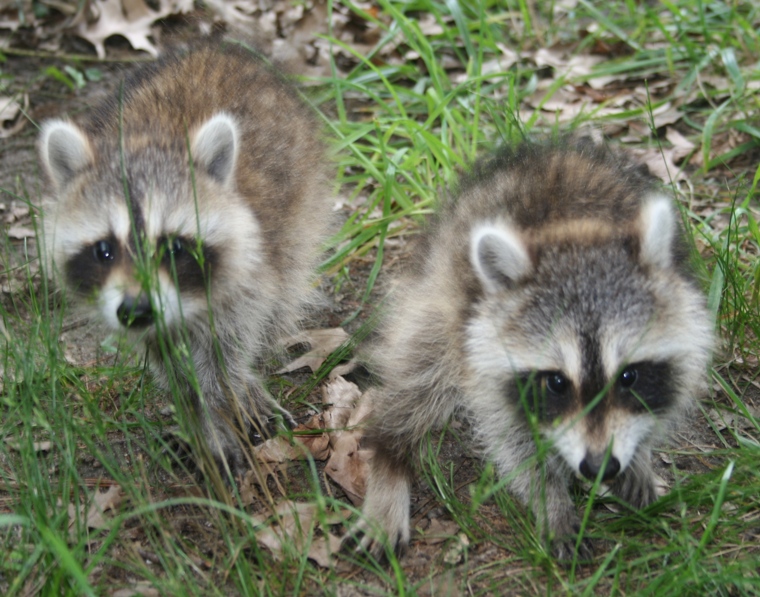 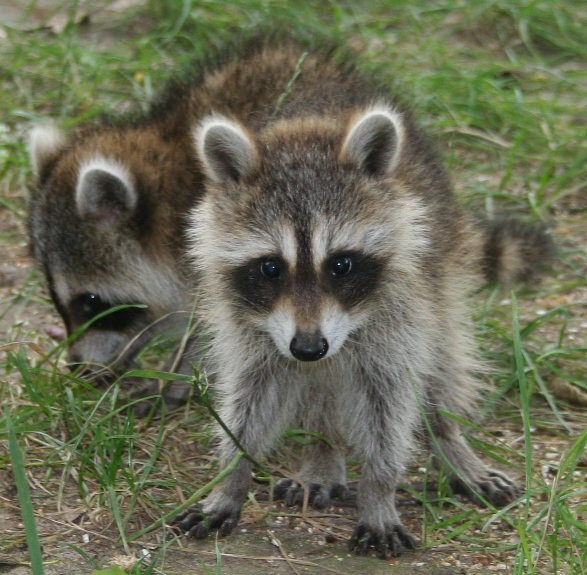 UNCONSCIOUS WORKER FOUND IN GROTTO FREEZER--- An unconscious 48-year-old man was discovered in the freezer at the Bethany Beach Grotto Pizza on Garfield Parkway around 3:20 p.m. Saturday. The man, a service tech, had reportedly been repairing the cooling unit. He was seen working on both the roof and in the freezer with an acetylene torch. He became unresponsive at some point, and was eventually discovered in the freezer by Grotto workers. An ambulance took him to Beebe Hospital, possibly suffering from a heart ailment.

DEWEY SAYS "NO" TO BLOW-UP DOLLS--- "Do we have a policy on blow-up dolls?" asked the lifeguard on McKinley Avenue late Thursday morning, noting that "we've had one complaint about it." The beach patrol captain radioed back that "that's a lewd act. That's something you use for lewdness, so it's a breach of peace, so you have to go over to them and explain..."