3 FILE FOR 2 COMMISSIONER SEATS, 2 FOR MAYOR IN REHOBOTH

There are challengers for both mayor and the two commissioner seats up for grabs this summer in Rehoboth Beach. The deadline to file to run was 4:30 p.m. last Monday. 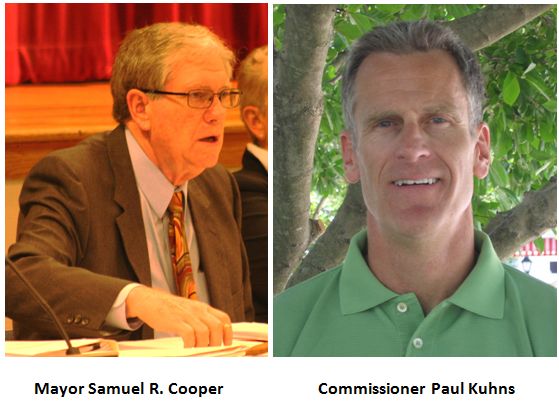 Mayor Cooper has served as mayor for nine three-year terms and he is now running for his 10th term. Mayor Cooper has thus far proven to be unbeatable! He has faced mayoral challengers six times and won every match by 12 to 30 percent. Of the six matches, Comm. Kuhns came the closest in 2008.

In 2008, Commissioner Paul Kuhns lost to Mayor Cooper by 12 percent.

To be eligible to vote in the city election on August 12, 2017, you must register on or before July 13. For more details see the city's website.

This Cape Gazette article has details on the candidates.

Photos courtesy of the candidates

BOY SERIOUSLY INJURED AFTER COLLISION WITH CAR IN DOWNTOWN R.B.

A six-year-old boy was taken by helicopter to a trauma center after he was struck by an Acura MDX in the second block of Maryland Avenue around 7:40 p.m. Sunday. 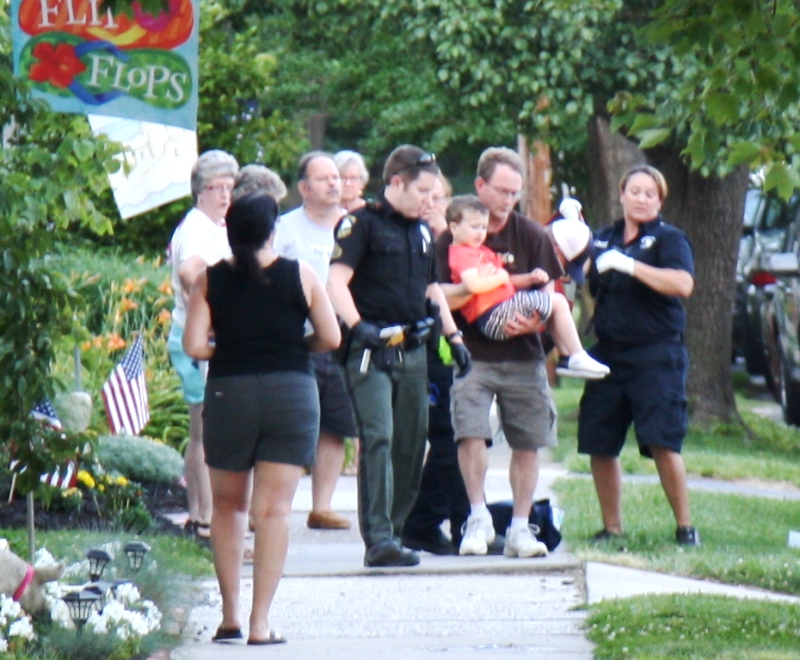 The boy was still conscious but suffered a deep cut to his abdomen. He was loaded onto the Rehoboth Beach ambulance and taken to the Rehoboth Elementary School where he was flown by Trooper 2 to Nemours Alfred I. duPont Hospital for Children. 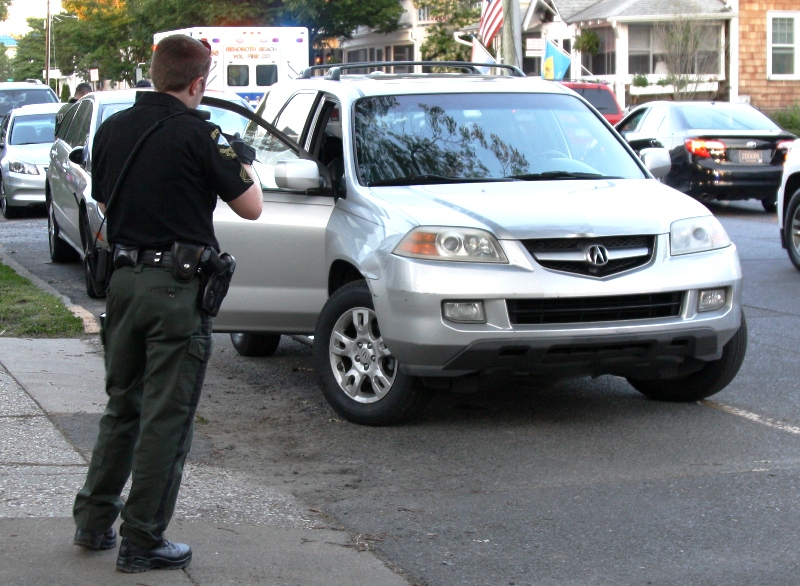 The impact appears to have dented the hood of the Acura. No word yet from police on charges, if any.

Not often does fire break out at one of the largest residential buildings in Sussex County, and when it does, it is a big deal! More than a half dozen fire companies responded this past Saturday shortly after security guards reported smoke coming from an 11th-floor condo around 12:10 p.m. They sounded the alarm and started evacuating the building. 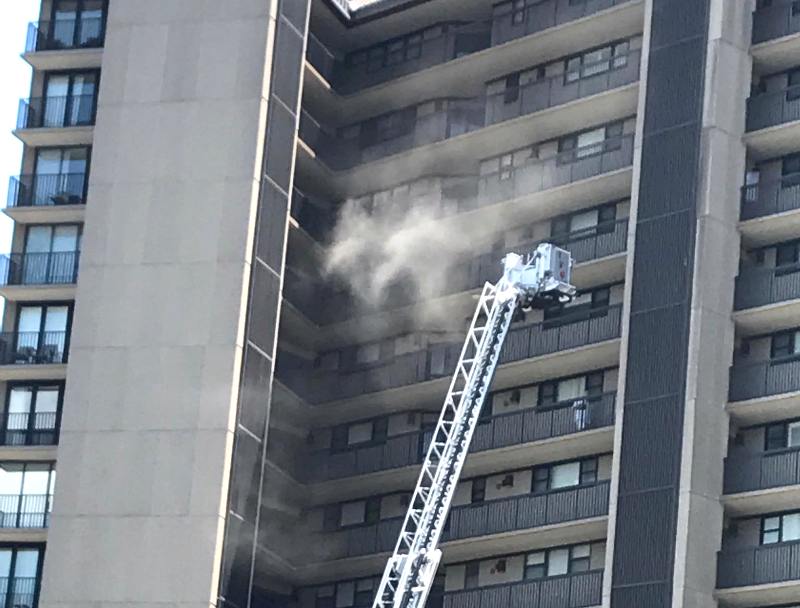 Firefighters arrived within minutes and soon had the fire under control. There was smoke and water damage to other units.

The first accident was reported last Monday around 1:45 p.m. when a 21-year-old female was riding south in the northbound shoulder of Coastal Highway at the intersection with Rehoboth Beach Plaza, across from Spring Lake Drive. At the same time, police say, a 2007 Kia Sedona was exiting the plaza to turn northbound on Coastal Highway when the car struck the bicyclist. She was taken to Beebe with a leg injury and was later cited for operating a bicycle on the wrong side of the road, police said.

That was followed by another bike accident last Tuesday around 1:10 p.m. when another 21-year-old woman was riding her bicycle north on the sidewalk approaching the entrance to IHOP. A 2017 Volkswagen Jetta, police said, was exiting the parking lot to travel south on Coastal Highway when the two collided. The bicyclist was taken to Beebe with a leg injury and was cited for riding a bicycle on a sidewalk or crosswalk where prohibited.

The third incident was reported around 4 p.m. Saturday when an 18-year-old girl was struck in the area of Coastal Highway and Country Club Drive, above, south of the Rehoboth Wawa. She was taken to Beebe Hospital with minor injuries. Police have not yet released any information regarding this accident.

DelDOT and its partners are once again manning bike safety checkpoints this summer to equip bicyclists with lights, helmets, safety brochures and make minor adjustments. 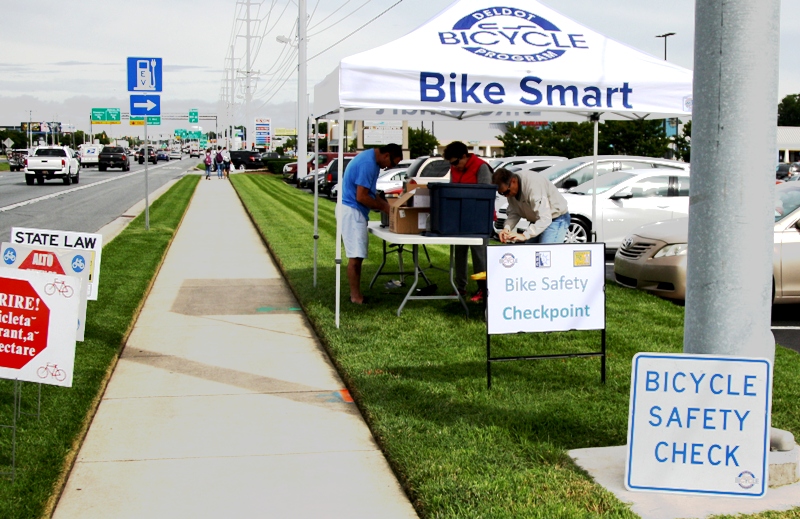 It was only the second time Dewey Beach has received a swimming advisory in recent memory. The previous advisory was issued last summer on June 29. This sign went up on the bulletin board at Dagsworthy Street this past week after tests showed "elevated indicator bacteria levels resulting from recent rainfall." 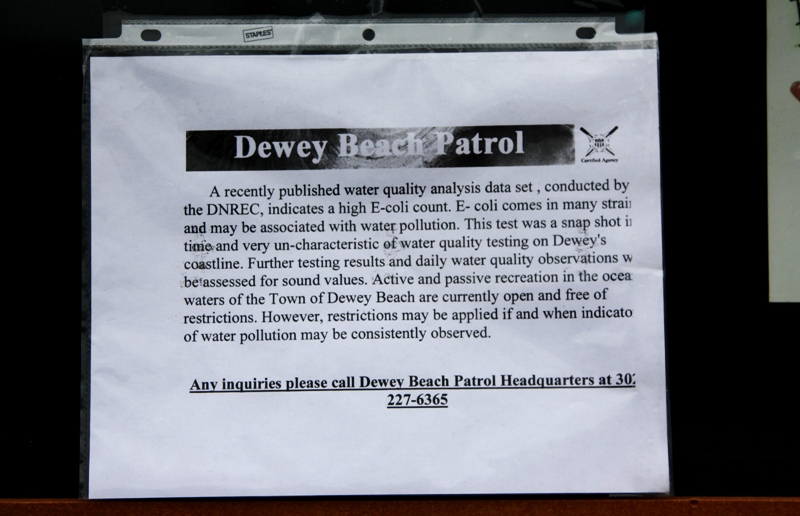 The state samples the ocean water off Dagsworthy and Swedes Streets on a regular basis each week and both samples from this past Monday showed elevated levels, especially on Swedes Street. Follow-up samples taken on Tuesday, according to the DNREC website, were within acceptable limits.

With the cold damp weather, hardly anybody was swimming in the ocean last week or even on the beach. This is what the beach looked like on Wednesday.

Beach towns along the shore continued to struggle to remove the recent invasion of marsh grass this past week. 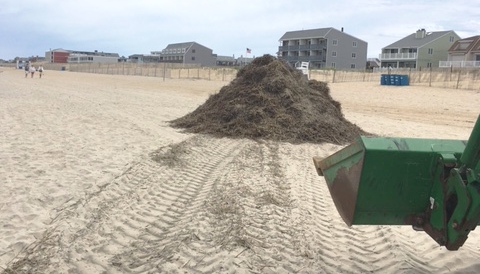 It was a team effort in Dewey Beach, where they enlisted female prisoners from the Sussex Correctional Institution, lifeguards, David Lynam, who runs the beach concessions, and Tony Crivella of Clean Beaches of Delaware LLC. 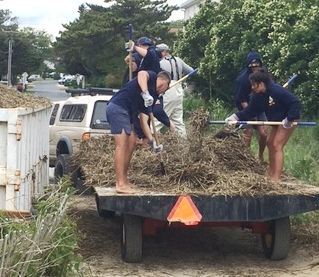 They used hand rakes and tractors to remove the annoying mass of grassy debris. 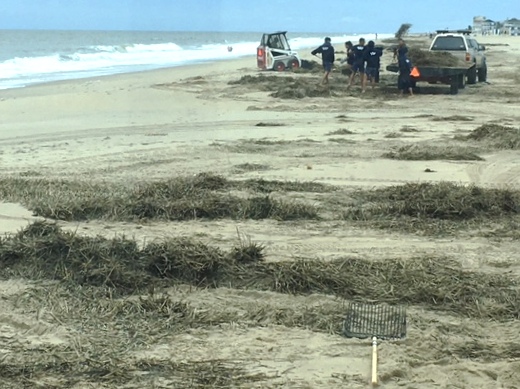 The grass was collected in piles, towed from the beach on trailers and deposited in dumpsters. 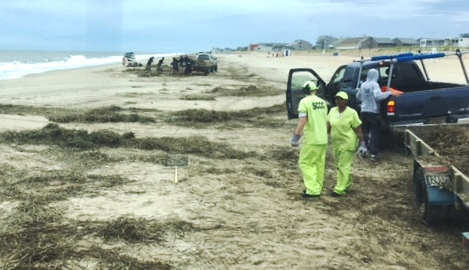 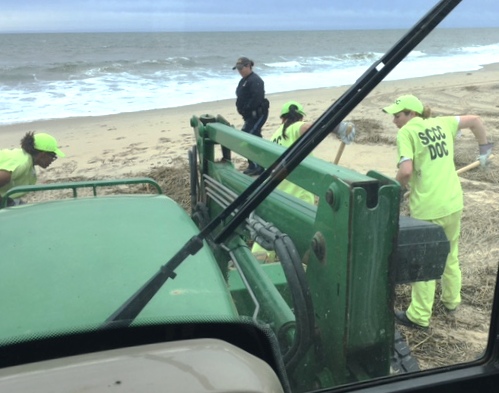 It appears primitive, but it often does the trick! If repeated openings and closings of the Rehoboth Avenue drawbridge do not get it to close fully, "Plan B" is to roll a heavy truck onto the bridge from the Rehoboth side. The weight of the truck is often enough to get the bridge to close those last few inches.

The bridge had a scheduled opening around 12:50 p.m. on Friday. But when the bridge tender attempted to lower the span back into place, it would not close fully. Repeated openings and closings did not do the trick to close those last few inches.

As traffic backed up on Rehoboth Avenue and out along Coastal Highway all the way to Dewey, DelDOT officials called for "Plan B."

"The drawbridge was stuck in the raised position for less than an hour this afternoon due to some parts becoming misaligned," Greg Layton, DelDOT spokesman, said late Friday afternoon. "It is functioning properly now."

2 ART EXHIBITIONS OPEN THIS PAST SATURDAY IN R.B.

Two thought-provoking art exhibitions opened Saturday night in Rehoboth Beach, one at CAMP Rehoboth, and the other at Gallery 50.

CAMP Rehoboth is featuring a joint art exhibition in conjunction with the Peninsula Gallery of Lewes. Tony Boyd-Heron, co-owner of the Peninsula Gallery, says his goal was to get artists who were normally associated with CAMP Rehoboth into his gallery, and vice versa, while raising money for Project Campfire which attempts to foster art experiences for the over 55 population.

One of the artists attending the opening was Sydney McGinley, a perfectionist who works with the Fletcher Color System and the Golden Section Ratio. She is one of about 175 master pastelists in the world. Here she is with her Gentleman 16th Century. 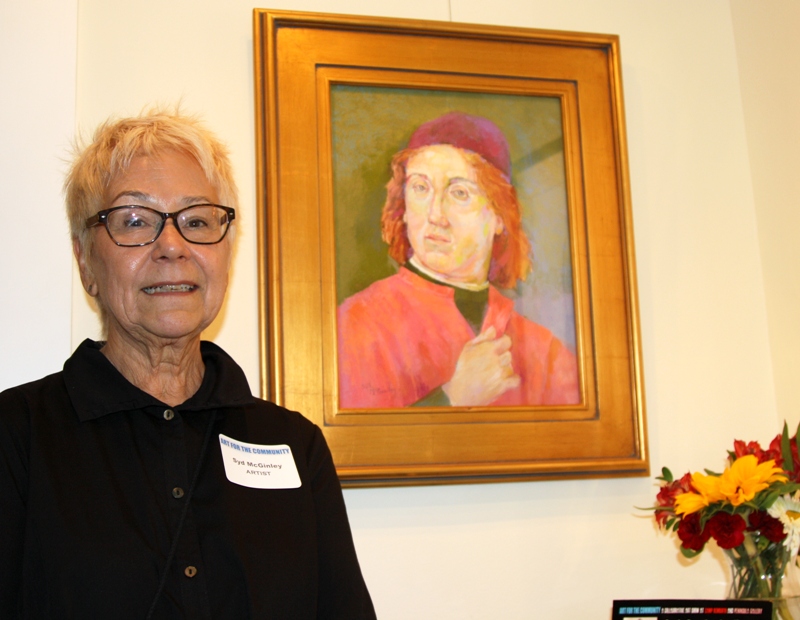 Composition is always important to her. She starts with thumbnail sketches, then value studies, and finally, the larger piece. She says she has "a lot of the problems solved" by the time she gets to the larger piece, "but still have a lot of time for freshness that comes with working just naturally." 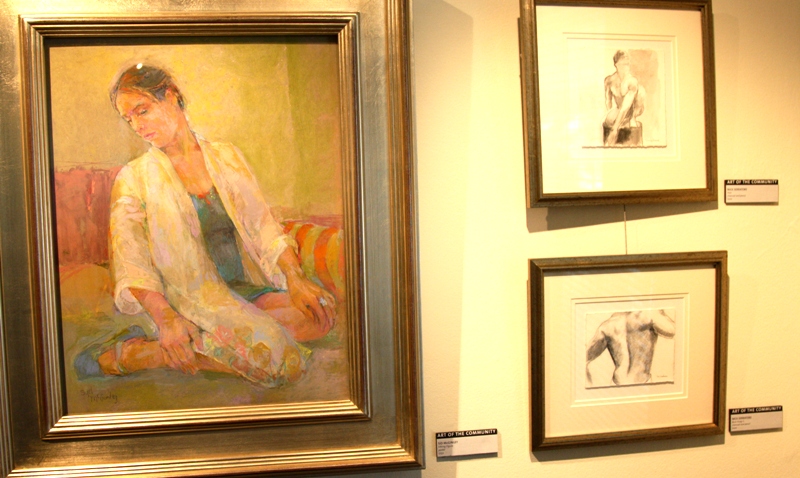 This joint exhibition at CAMP Rehoboth and the Peninsula Gallery will continue through June 25.

As part of VegFest, Gallery 50 opened a new exhibition by Boston artists, Dart and Dino. "Save Earth" has become part of their mantra. Through their art, they show their love for animals, love for ancient cultures, beautiful positivity and educational objects that all ages can appreciate. Here they are, soon to be wife and husband, in front of their collective works, Tradlands on the top and Dream Mandala, below. 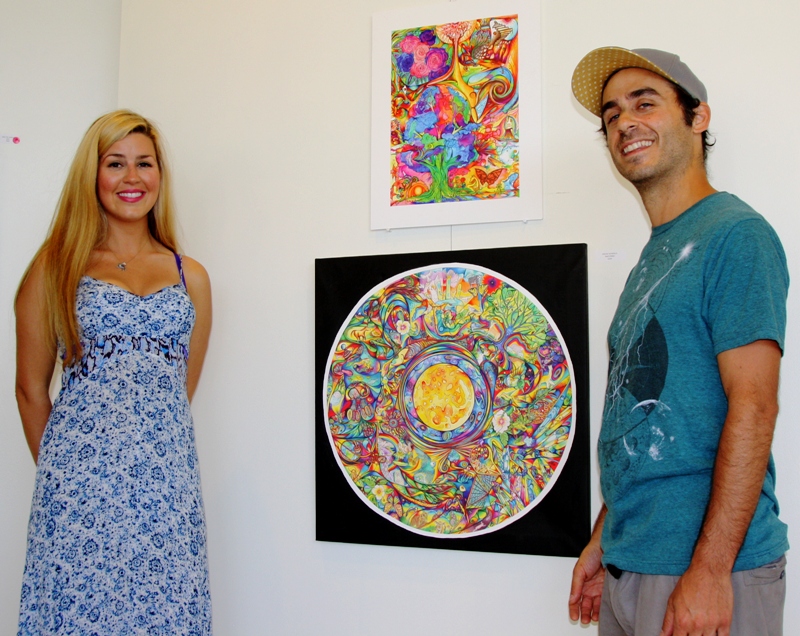 Every little creature in their artwork, Dart's pet dog, a rescued cow, birds she feeds in her yard, are all thoughtfully chosen. "We have a purpose for putting everything in there," she points out. "Everything is hand-drawn with sharpies or water color," Dino noted.

Walking tours resume on June 29 starting at 9 a.m. at the bandstand. Look for the pink umbrella held by tour guide Jean Brolund. The tour is a 50-minute gentle stroll around downtown. The cost of the tour is $10. Reservations are required.

Starting June 22, the Rehoboth Beach Museum hosts guided history tours of the city on the Jolly Trolley. Tours last approximately 50 minutes and include a welcome from the Reverend Todd, founder of the Rehoboth Camp Meeting Association, and a lady parishioner at the historic Anna Hazzard Tent House, below, where the tours begin and end. 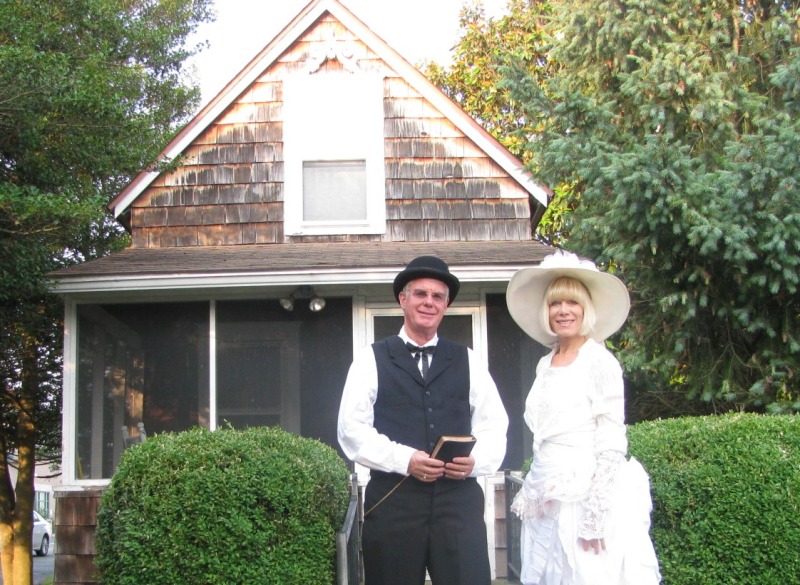 Members of the public who are looking for volunteer opportunities are encouraged to contact the Rehoboth Beach Historical Society. Volunteer opportunities include greeting visitors, working with the archives and completing research on objects in the permanent collection. Volunteers can work for a few hours a month or a regular weekly schedule.

There have been numerous sightings of these large turtles on the lawn at Lake Comegys laying their eggs, says resident Peggy Douglas. "I fear that the birds usually get the eggs, however." She believes this to be a common snapping turtle. 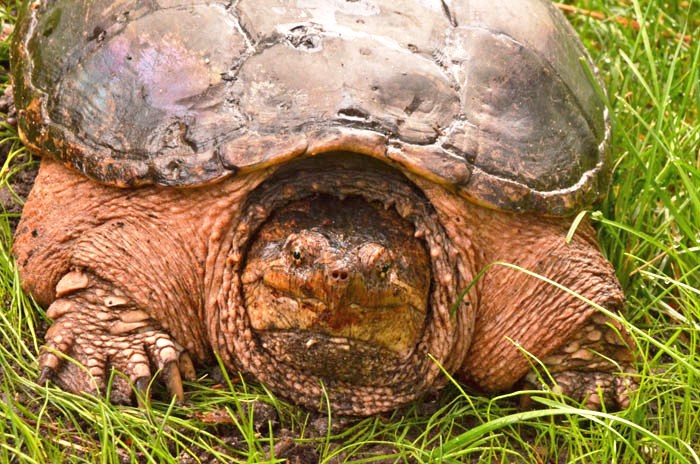 The "Beach Goes Blue... Red & White, Too!" now in its second year, ended with this choreographed light show late Saturday. 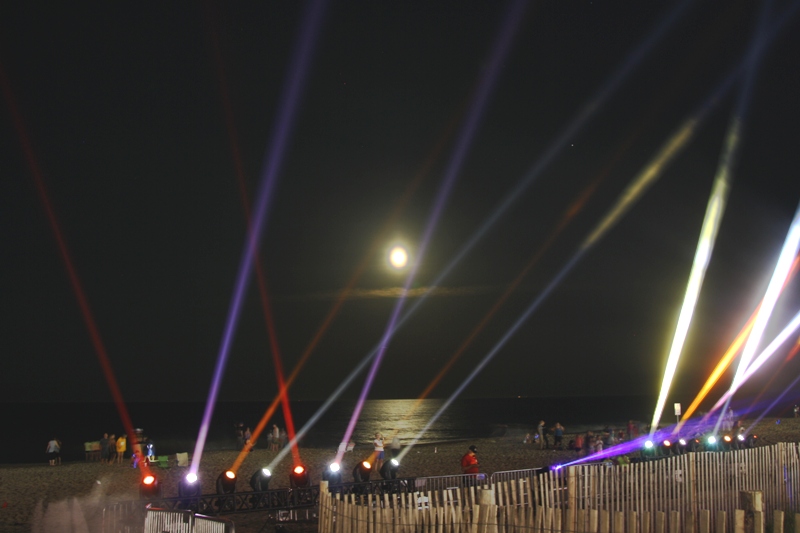 22-YEAR-OLD DIES OF SUSPECTED OVERDOSE IN LONG NECK McDONALDS RESTROOM--- A 22-year-old woman, reported to be a McDonalds employee, was discovered in cardiac arrest around 7:10 p.m. Saturday inside the restaurant restroom on John J. Williams Hwy. Paramedics attempted to resuscitate her but she was later pronounced dead. State police would only confirm that this is an active investigation. One source close to the investigation says this was a suspected heroin overdose, but the medical examiner will make the final determination.

O.C. DEATH INVESTIGATIONS--- Ocean City has had two death investigations this past week. The first was on Wednesday at the Barefoot Country Condo at 13800 Wight St. followed by another on Thursday around 2:30 p.m. at a private residence in the 13300 block of Colonial Road. Both were reported to be men around 40 years old. No word yet from police or the medical examiner.

CAR REAR-ENDS BUS, SENDS WOMAN TO TRAUMA CENTER VIA HELICOPTER--- The only medevac this past week in Ocean City was for a 41-year-old woman who rear-ended a bus around 10:40 p.m. Wednesday. Because she had been briefly unconscious, she was taken to Northside Park and flown to a trauma center. There were no injuries reported on the bus.

REHOBOTH POLICE ARREST MAN/WOMAN FOR "INAPPROPRIATE ACTIVITY"--- It was still daylight when police caught a couple engaged in what one person described as "inappropriate activity" on a secluded park bench at Lake Gerar off Olive Avenue around 6:10 p.m. Saturday. Both were taken into custody.

Local restaurant groups on the rise in Delaware

Pro-LGBT Delaware teacher forced out: "They were out to get her"

B-2 stealth bomber to appear at OC Air Show

Delaware men arrested for possession of a firearm and marijuana in O.C.

This report is being e-mailed to 1,993 recipients. Thanks for your support!