The attack happened around 11:40 p.m. on Rehoboth Avenue east of Church Street. That is outside the Rehoboth Beach city limits.

The two women, ages 19 and 20, summoned assistance at the Pirate's Cove Motel around 11:55 p.m. That is where two state troopers and the Rehoboth Beach ambulance crew came to their aid.

Both women -- described as eastern European -- suffered cuts and bruises to the face, hands, knee and feet.

According to a state police news release, the male suspects struck the women in the back of their heads which caused them to fall to the ground.

Police say the men continued to assault the women as they lay on the ground. Both women were taken by ambulance to Beebe Hospital.

Police describe the suspects as two black men in their late teens or early 20's about 5’06” to 5’08”. One man wore a gray shirt and unknown color pants. The other man wore a blue shirt and blue jeans.

This is roughly the same area where two other female exchange students were robbed in 2009.

A 40-minute night-time surf rescue for an intoxicated, combative, suicidal man in Dewey Beach put rescuers to the test.

Around 9:25 p.m. Friday, a man reportedly approached a woman on the beach at Dickinson Avenue. He told her he was a Gulf War veteran. He said he “had nothing to live for,” walked into the surf leaving his possessions on the beach, and disappeared.

Crowds of visitors lined the beach to watch the rescue operation. 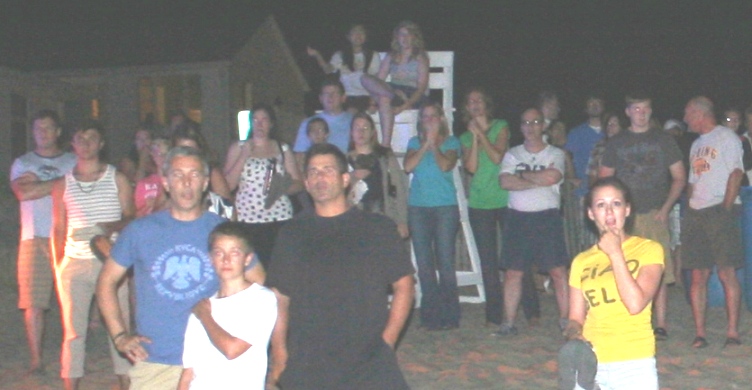 Emergency personnel scanned the surf for signs of the man. They had several reported sightings, but finally spotted him at 9:41 p.m. off Rodney Avenue. Two rescue swimmers, Sr. Lt. Chris Muscara from the Dewey Beach Patrol and John Hazzard from the Rehoboth Beach VFC came to the rescue.

Lt. Muscara said he went in the first time alone, and when he reached the man, he threatened to drag anybody under who attempted to save him. Lt. Muscara says he said “I am sorry… Don’t come in closer, I will take you with me.” So Lt. Muscara waited until Hazzard arrived to attempt a rescue.

Meanwhile, the state police helicopter hovered over the scene and lit the man up in the surf as the Coast Guard rescue boat and both rescue swimmers and crews on the beach closed in on the man.

After more than 30 minutes in the ocean, the man appeared to be showing signs of fatigue and both rescue swimmers were able to drag him to shore. They pulled him on the beach at 10:03 p.m. just north of Read Avenue. 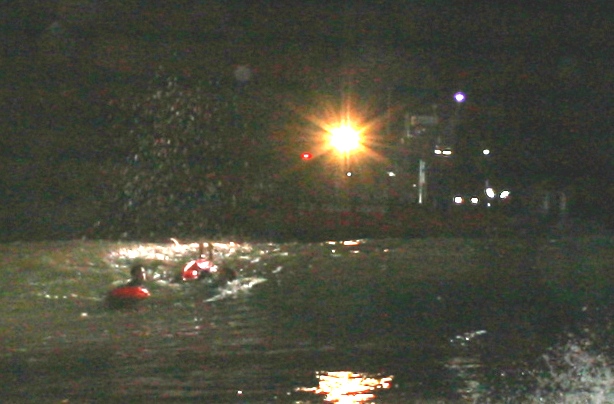 The man was pale and his body was limp, almost lifeless, when they dragged him from the surf. Once spectators realized he was still alive, though, they applauded. 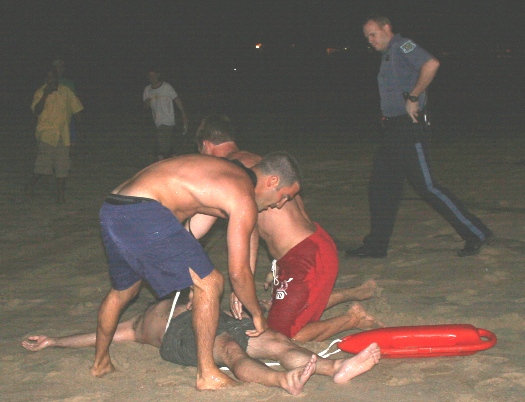 He was met by police and EMS personnel who loaded him on the back of the fire company's pickup truck and took him to a waiting ambulance. 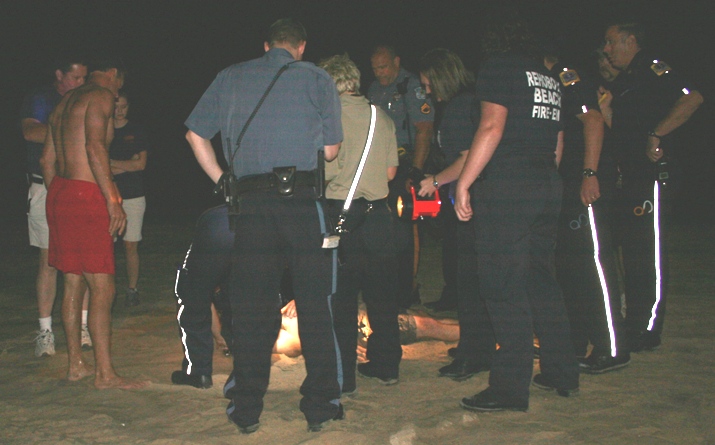 The 44-year-old man was conscious but vomiting. He remained combative when taken to Beebe Hospital.

Around 3:50 p.m. Friday, visitors returning to their vehicle in front of Grotto Pizza on Rehoboth Avenue spotted a baby left seemingly unattended in a Honda Accord with Virginia tags.

They notified the staff at Grotto Pizza, called 9-1-1 and one of them removed the baby while waiting for police and EMS. They said the windows were rolled up on the Honda. But the door was unlocked.

When the women returned, police waited with them several minutes for an ambulance to arrive from Lewes to evaluate the 8-month-old girl's condition. She appeared to be fine.

Afterwards, the women departed. Police have not said what action, if any, would be taken against them.

Staff at Grotto Pizza expressed concern regarding the incident. Several of the employees were angry, and even wrote down the women's tag before she departed. 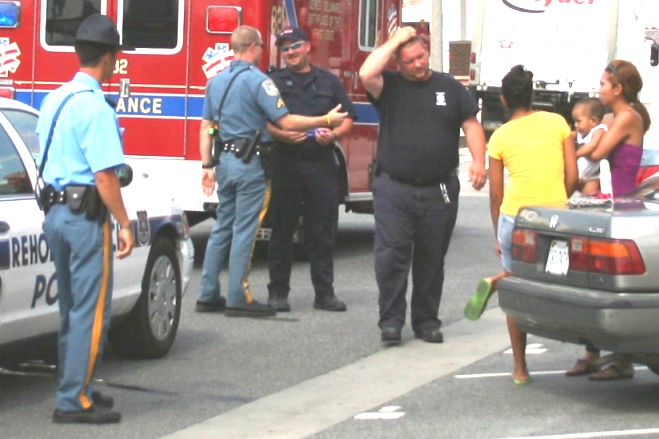 These two men wearing white T-shirts were number five and six. They were caught Wednesday around 3:45 p.m. on Rehoboth Avenue and Second Street. 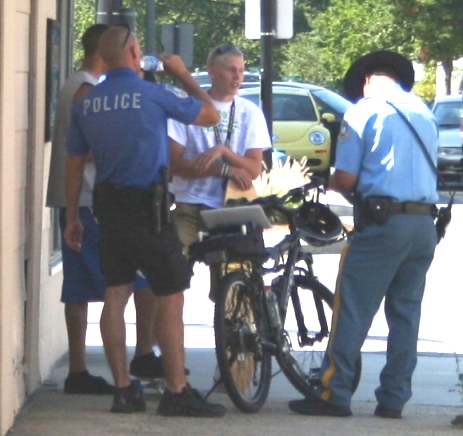 Here is what the city's ordinance says about skateboarding and how much fine they could face.

There are challenges these days for visitors parking in the Lewes Beach public parking lot.

The multi-space parking meter needs a space number when visitors want to pay for their parking. But the numbers painted on many spaces, especially those near the sand, have worn away or are difficult to read. 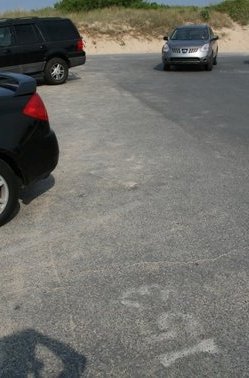 These visitors discuss the problem with the parking ticket writer.

BEAMER GETS THE BOOT IN DEWEY BEACH 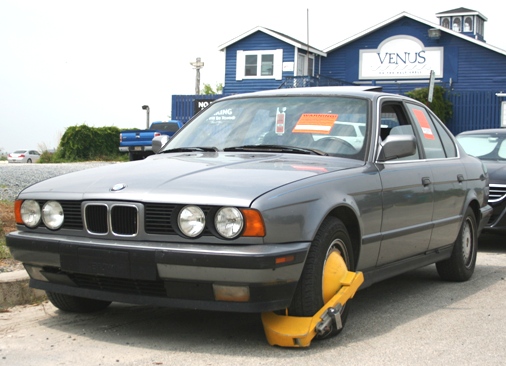 Tony Crivella spotted this BMW 525i parked on Dagsworthy Avenue in Dewey Beach early Sunday. He said this was the first time he has seen the boot in action in Dewey Beach. 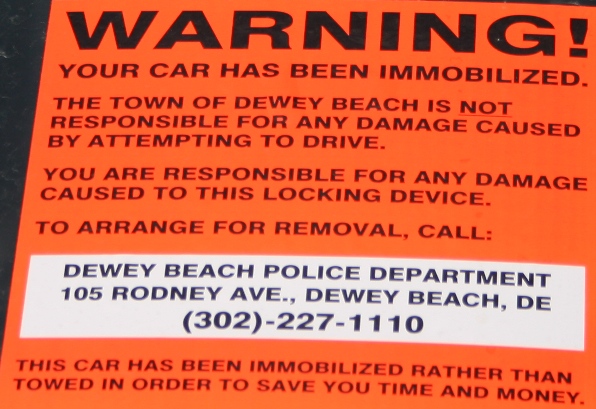 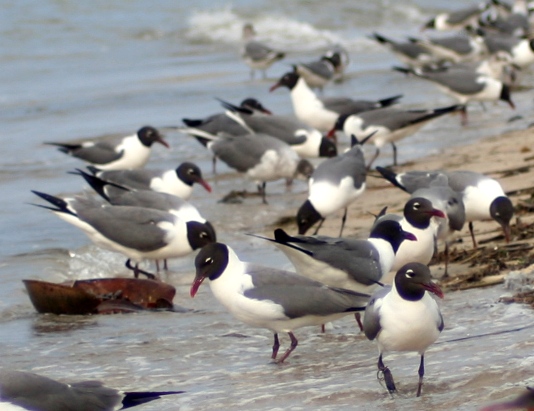 TODDLER NEARLY DROWNS IN OCEAN VIEW POOL--- A 3-year-old Bethesda boy was pulled from a swimming pool around 11 a.m. Saturday. He was reportedly in cardiac arrest. Robert Stuart, county EMS director, said the toddler was found at the bottom of the pool on Waterside Circle in Murrays Haven in the Ocean View area. When paramedics arrived, resuscitation efforts were already in progress. The child regained a pulse and was flown to Alfred I. duPont Hospital for Children.

SUSPECTED STOLEN CAR IN REHOBOTH BEACH--- Around 8 a.m. Sunday, a woman in the second block of Philadelphia Street in Rehoboth Beach reported her 2011 red Scion with Pennsylvania tags missing. The police dispatcher said there was no record of it being towed. Police appeared to be investigating the case Sunday as a stolen auto, but have not officially said.

FIGHTS ON REHOBOTH AVE, BOARDWALK, POSSIBLY GANG RELATED--- There was several tense moments after a couple fights broke out on the Rehoboth Beach boardwalk and Rehoboth Avenue Saturday between 10:25 and 11:15 p.m. Many of those involved scattered as police reinforcements arrived. One officer said he used pepper spray on the combatants. Police caught two or three. According to one source, there is some indication that one of the confrontations, the one at First Street Station, could be gang related.

PEDESTRIAN STRUCK IN O.C., FLOWN TO TRAUMA CENTER--- The only medevac in Ocean City this weekend was for a 36-year-old woman who was struck by a vehicle in the southbound lanes of Coastal Highway at 56th Street. It happened around 10:20 p.m. Sunday. She was unconscious but was later reported alert when loaded on a state police helicopter.

OTHER EARLY MORNING O.C. FIRE ALARMS--- The fire alarm sounded at the Sea Bay Hotel around 5 a.m. Friday on 60th Street. Firefighters discovered a fire alarm activated on the third floor, but no fire. Around 6:20 a.m., a suspected malfunctioning smoke detector activated at Blaire Isle Condo on 83rd Street.

Just before 4 a.m. Saturday, firefighters responded to the Spindrift Motel on 25th Street. The problem was reported as a malicious activation of the motel's alarm system using a fire alarm pull station.

Around 3:40 a.m. on Sunday, firefighters went to the Old Town Apartments on 8th Street. They described the 3-story wood-frame building as "heavily occupied." The fire alarm panel appeared to be damaged but the alarm had not been activated.

Open containers may be made civil offense in Rehoboth

"Persons of interest" ID'd in attack on Blade reporter

Vacation rentals are up at the beach