Having trouble viewing this report or its photos? Click here: http://henney.com/weekend04/ or e-mail alanhenney@aim.com

After spending the spring warning high school students of the dangers of "senior week" and underage drinking at the seashore, Dewey Beach police were out in force this past week targeting the underage drinkers. Delaware Division of Alcohol and Tobacco Enforcement (DATE) agents assisted Dewey police Monday night into the early hours of Tuesday. The saturating patrols were made possible with funds from an $8,000 grant from the Enforcing the Underage Drinking Laws (EUDL) Program. 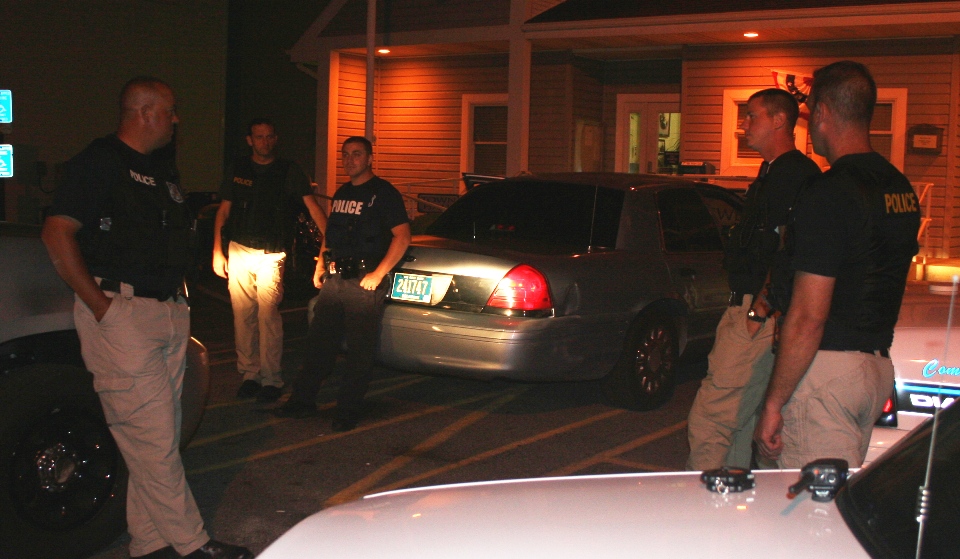 Offenders were not necessarily recent high school grads. This man was one of two 20 year olds cited by Sgt. Clifford Dempsey, police spokesman, early Tuesday. He was going to receive a $273 ticket, but when he became argumentative and cursing, he was placed under arrest around 2 a.m. on Clayton Street. 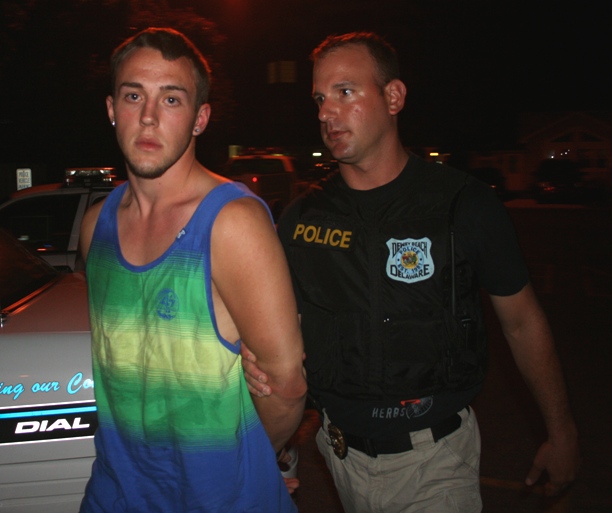 Ask anybody in Dewey, and they will probably say that "senior week" attendance was down significantly this year. Sgt. Dempsey attributes it to the proactive efforts the department made this spring visiting the New Castle County and Montgomery County, Maryland schools.

He adds that police cannot take all the credit. Underage drinking this year, Sgt. Dempsey said, received increased attention in the media, starting with a series of news reports by Andrea McCarren and photographer Dave Satchell of WUSA-TV who hammered away at the problem in D.C. and Montgomery County for weeks. That was followed by reports in the Delmarva news, including this News Journal article from last week.

That, combined with the increased outreach of Dewey Beach police, with additional assistance from the state and Bethany Beach police, to reach out to both public and private schools in New Castle County, Sgt. Dempsey says, appears to have had a significant impact on Dewey this season.

During one shift, police confiscated this assortment of alcohol, mostly beer, in cans, bottles and kegs. They also had recovered some marijuana and drug paraphernalia. 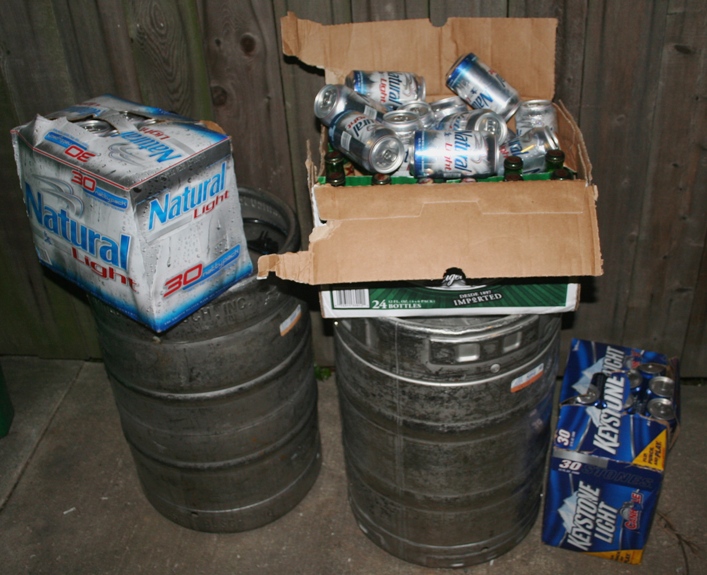 Just how did June bug season 2012 compare with last year? We will hopefully find out when police release the June stats.

As Dewey Beach police were busting underage drinkers in town, an intoxicated 18-year-old man stumbled down the stairs at the Dewey Beach Surf Club Beach House on Read Avenue around 2:30 a.m. Tuesday.

He suffered cuts and bruises to his head, a bleeding nose and possibly a dislocated shoulder. He briefly was unconscious and when he awoke appeared confused. The Rehoboth Beach ambulance took him to Beebe Hospital.

ANOTHER DEAD SEA TURTLE; THIS TIME IN DEWEY

Shortly after reporting to duty on Sunday, Dewey Beach lifeguards spotted a large object floating in the surf about 100 yards from shore, surrounded by seagulls. It turned out to be a severely decomposed leatherback which the guards brought on the beach at Cullen Street.

The remains were so heavy, lifeguards asked the police for an SUV to help drag it across the sand toward the dunes where they planned to bury it after experts from the Marine Education, Research and Rehabilitation Institute examined it. 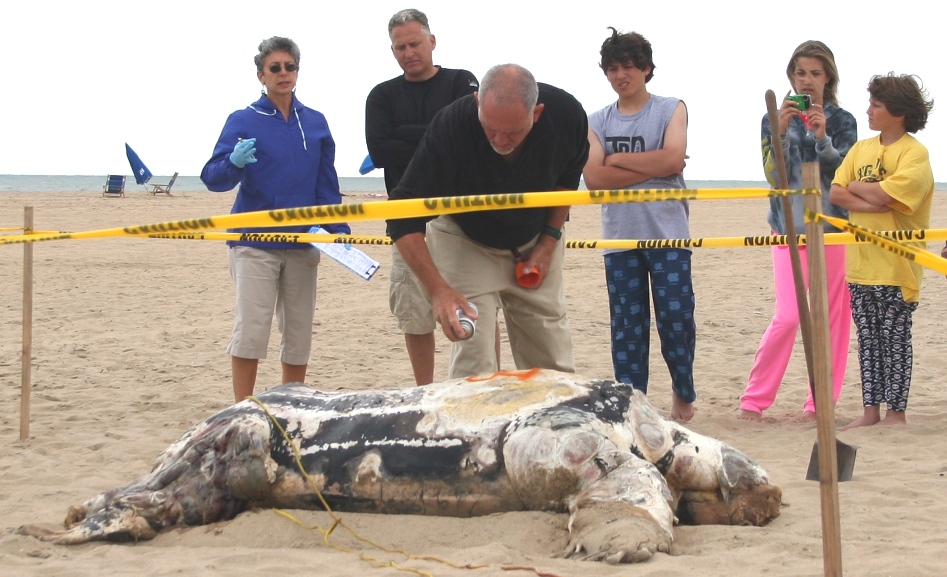 Suzanne Thurman, MERR executive director, says this was the only leatherback reported so far this year. It was roughly five-feet long and 500 pounds in weight. She says leatherbacks can reach 1000 pounds. The leatherback is the largest of all living sea turtles and is critically endangered.

MERR has investigated nine other sea turtle incidents so far this year -- all loggerheads.

Five of the 10 sea turtle incidents were reported during the past three days. That includes the turtle from Dewey and four others found along the Delaware Bay. Thurman says the strong northeast wind has been bringing the remains to shore, and she had pre-alerted the MERR team on Friday anticipating this might happen.

The beach area and beach-entry point fenced off at the tip of the parking lot north of the Henlopen Condos/Hotel is under the control of the U.S. Army Corps of Engineers (USACE) and is a last remnant of the beach nourishment project, says Rehoboth Beach Commissioner Stan Mills. 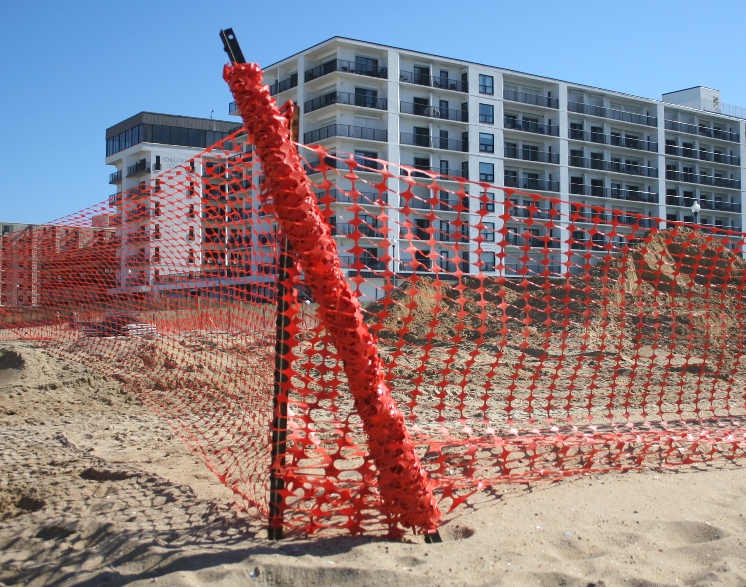 The USACE's contractor, he said, is working on completion of extensive renovations of all the dune crossings within the project area and uses the noted area for access to the beach and also as a staging area.

"Work is anticipated to be completed before the end of June weather permitting," Commissioner Mills added. "Note that the handicap space was/is available for parking this weekend but may be closed off again in the future to allow construction vehicles and equipment access onto the beach noting that a vehicle standing in the handicap parking space blocks part of the entry. Fortunately this is only a temporary condition."

Not often one finds protesters in the Rehoboth area. Joe Wolf and Josh Brown held this banner Monday outside the new Buffalo Wild Wings opening soon in the Lighthouse Plaza near the Rehoboth Giant Food on Coastal Highway. 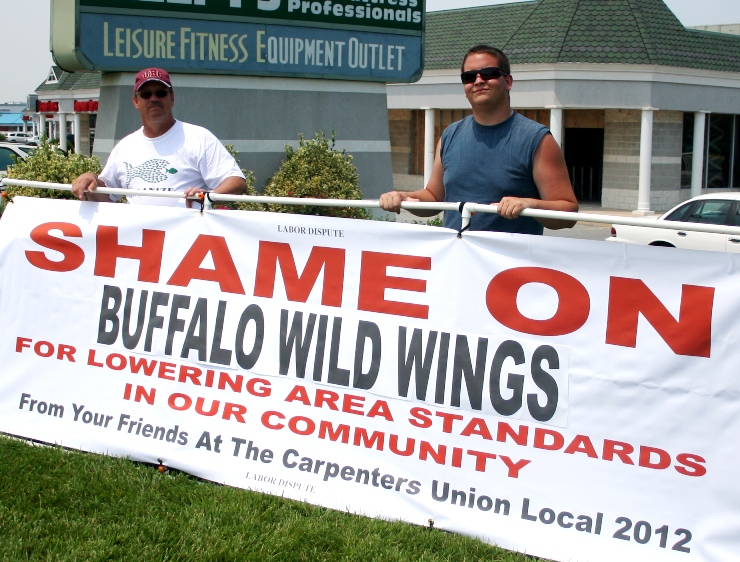 Wolf and Brown said they could not comment much on the protest, but distributed this flier and referred people to Mark Wagner, the area rep for the Metropolitan Regional Council of Carpenters.

In an e-mail from Steve Wheat of Buffalo Wild Wings on Friday, he said "We received your e-mail requesting a comment concerning the protesters at the construction site for Buffalo Wild Wings. We do not have a comment at this time and prefer your questions be directed directly to the Bannett Group, LTD." No comment was received from the Bannett Group, either by e-mail or phone. 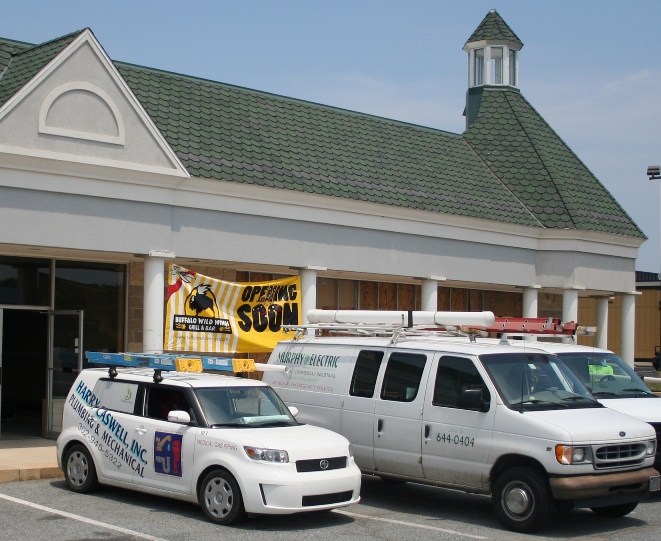 Perhaps it was the strong ocean breeze that helped fuel a few sound complaints Friday evening. Rehoboth Beach police received noise complaints from Delaware and Baltimore avenues, and one officer said he heard music from city hall. A caller in the second block of Delaware Avenue told the police dispatcher they could hear loud music even with the doors and windows closed. After investigating, it appears what they heard originated from the bandstand, when the band, Another Level, performed Friday night. Wind was out of the east at 16-17 m.p.h. 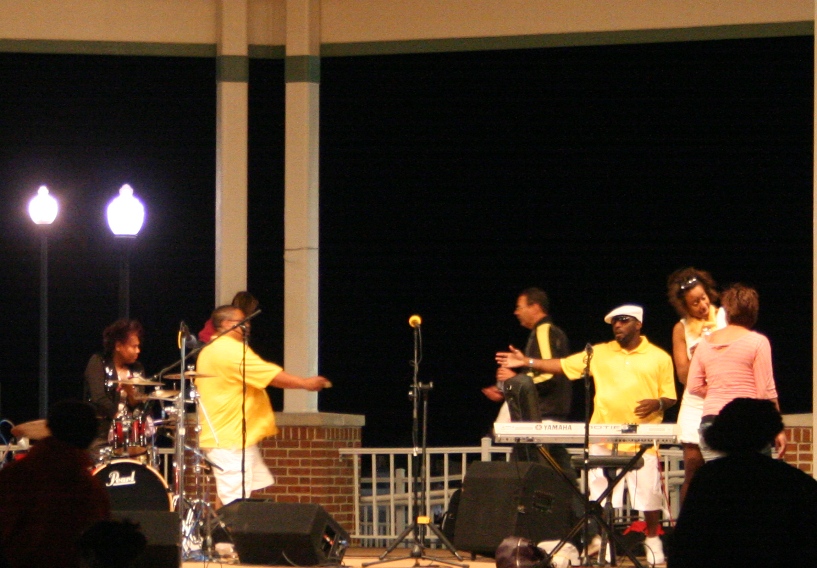 One would never guess that artist Ward Ellinger has color blindness. During the recent Mosaic ARTwalk Ellinger exhibited some of his new work for 2012. The acrylic on canvas painting shown below, Crayola, is one of his latest works on exhibition. Just how does Ellinger make such magnificent use of color? He says he reads what it says on the tubes! It took him about a month, working on this single piece, to complete it. 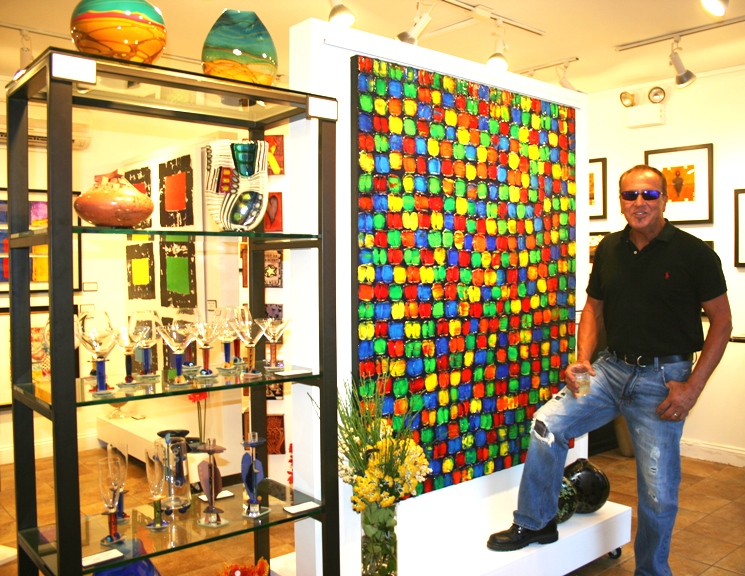 Also on exhibition in the Ward Ellinger Gallery are these works by Washington, D.C. artist James Adams. He is shown with Ghost Factories_Takoma 20012 and Ghost Factories_Yellowstone. 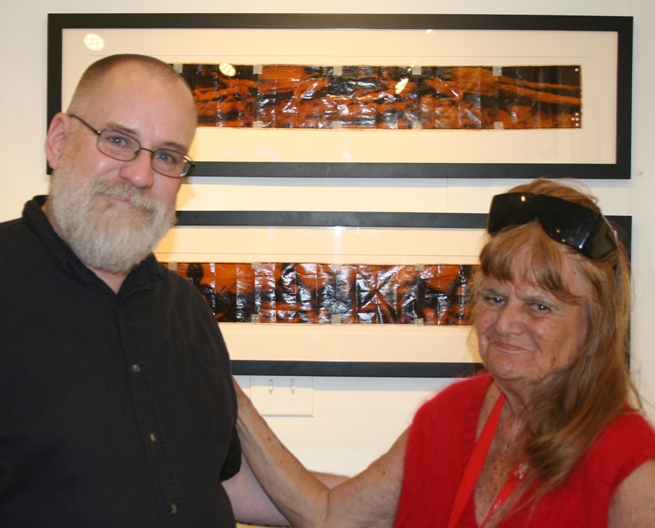 Adams has experience in cinema, and that shows in his work. In this particular example, he describes the works as visual interpretations of fogged memories, misfired remembrances and half-waking dreams.

He has a unique technique. Adams applies shellac over inkjet prints made on Manila paper. The paper is altered with a china marker, masking tape, tar, coffee, electrical tape and cellophane tape.

Visit his Website for details or view his art at the Ward Ellinger Gallery at 39 Baltimore Avenue in the CAMP Rehoboth courtyard. Also check the ongoing exhibition featuring art from a dozen local artists in the adjacent CAMP Rehoboth offices.

In the CAMP courtyard, playing lovely guitar music for the next weekend or more is Kyle Hann. 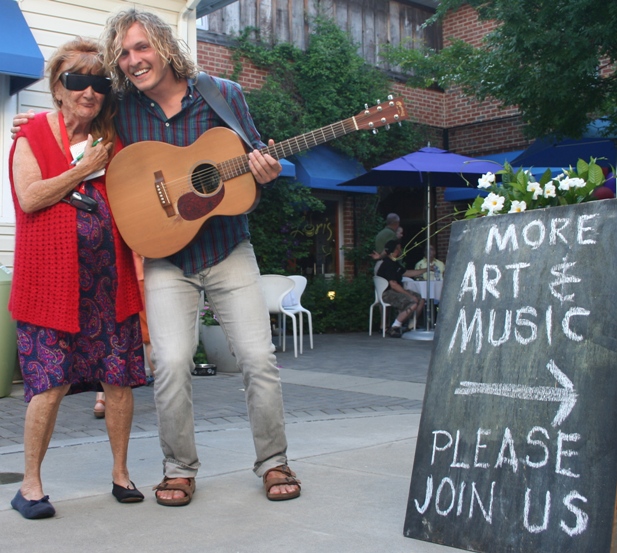 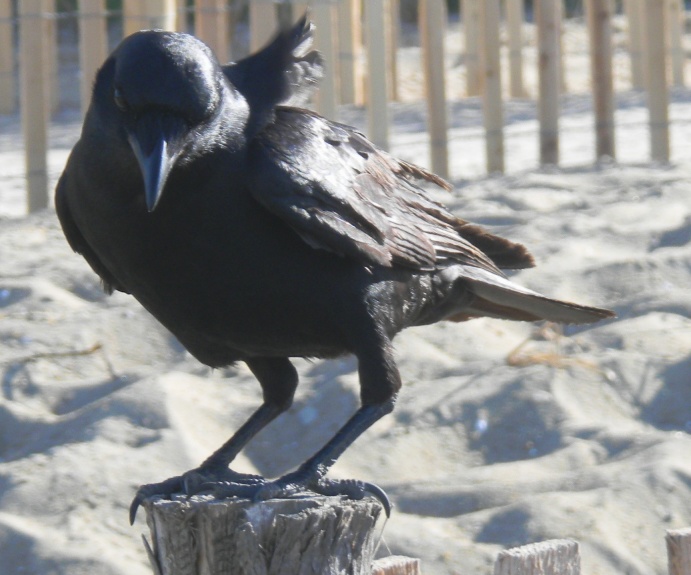 REHOBOTH POLICE OFFICER INJURED BY AGGRESSIVE DOG--- A police officer was injured while investigating a dog complaint. According to Hoyte Decker, a neighbor, in the first incident, two dogs attacked another dog. It happened as a neighbor walked her dog Wednesday morning. The injured dog suffered dog bite(s). That was reported to police. When an officer was sent to investigate, she too was attacked by at least one of the two dogs which were kept at a residence in the 200 block of Munson Street. He heard the officer screaming, and one neighbor said she was about to draw her gun on the dog when she was scratched in the arm around 5:10 p.m. Police have not yet said what charges or action has been taken against the dogs or owner.

O.C. HIGH-RISE ALARMS/EVACUATIONS, BUT NO FIRE--- Ocean City firefighters responded to two fire alarms this past Friday at high-rise buildings. Around 4:40 a.m. Friday, they were summoned to 11200 Coastal Highway at the Rainbow Condo after an audible fire alarm activated for a heat detector in a first-floor bathroom. Later, around 9:45 a.m., the fire alarm sounded at the Carousel at 11700 Coastal Highway. The building was being evacuated when firefighters arrived. The alarm panel showed a kitchen smoke alarm that had activated. No fire was found in either incident.

ANOTHER PEDESTRIAN STRUCK--- A 20-ish-year-old man was injured after getting struck by a vehicle around 7:20 p.m. Friday in the northbound lanes of Coastal Highway at 59th Street in Ocean City. He suffered a possible head injury and was flown to a trauma center from Jolly Roger Amusement Park.

Sat. 2:10 a.m., 600 block of Bayshore Drive, Ocean City, an intoxicated man wearing boxers reportedly disappeared after he jumped into the bay. A dive team along with a Maryland State Police helicopter, Coast Guard and DNR boats responded to assist firefighters. Around 2:30 a.m., as six rescue swimmers were suited for deployment with four already in the water, police found the missing man sleeping in his bed.

Sat. 5:08 p.m., Bethany Beach firefighters, Sussex County paramedics, the Delaware State Police helicopter and open-water rescue team were alerted when a man got caught in a rip off 3 R's beach in the Delaware Seashore State Park. Bystanders reportedly went to his rescue and helped bring him to shore using a bodyboard. He was safe on the beach when officials arrived. But an ambulance took him to Beebe Hospital for a check-up.

Sat. 6:40 p.m., New Road, on the Rehoboth Bay in the Delaware Seashore State Park, a small sailboat, possibly a Hobie Cat, was reported in distress. But when rescuers arrived, the sailboat was being pulled to shore by a motorboat. No one was found in distress.

Sat. 7:08 p.m., 77th Street in Ocean City, a swimmer was reported about 200 yards from shore. Three minutes later, rescuers arrived, confirmed the report and deployed the first of three rescue swimmers. Rescue swimmers reached the distressed swimmer around 7:17 p.m. and they were all safely on shore two minutes later.

Fire on Route 9 west of Lewes remains under investigation

'We're all about skimboarding here' (Dewey)

Old Indian River Inlet Bridge to be removed this summer