Tragically, for the second time during the past two weeks, a teenager became caught in a rip current and presumably drowned.

The massive search and rescue operation was launched when the 17-year-old male from Baltimore County disappeared in the ocean off 92nd Street. He reportedly became caught in a rip and submerged around 1:57 p.m.

Rescuers found the teen at 2:45 p.m. and rushed him to shore where they were met by EMS personnel, below. 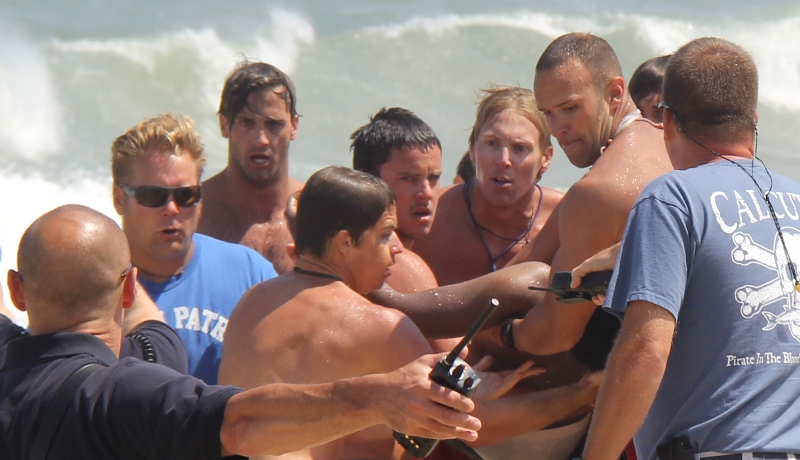 The crowd erupted in spontaneous applause, although not fully aware of the teen's condition. Scott Douglas, who witnessed and photographed the rescue operation, said they appeared to immediately begin CPR as they brought the teen to shore.

"The pulse of the crowd was fairly constant," Douglas said, "but definitely spiked when they found him. It was a palpable change."

"The lifeguards and fire department members worked together quite well. It seemed like a symphony, with the search coordinated by a lifeguard standing atop an ATV," he added. 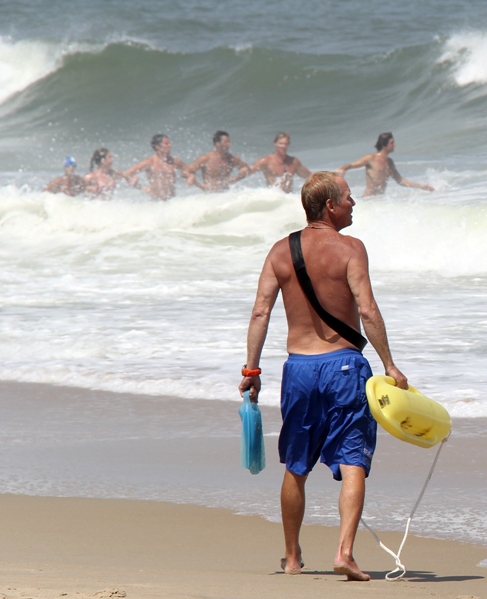 Divers from the Ocean City fire department also joined guards in the water.

Events for the O.C. air show were delayed and one of the planes joined the search. 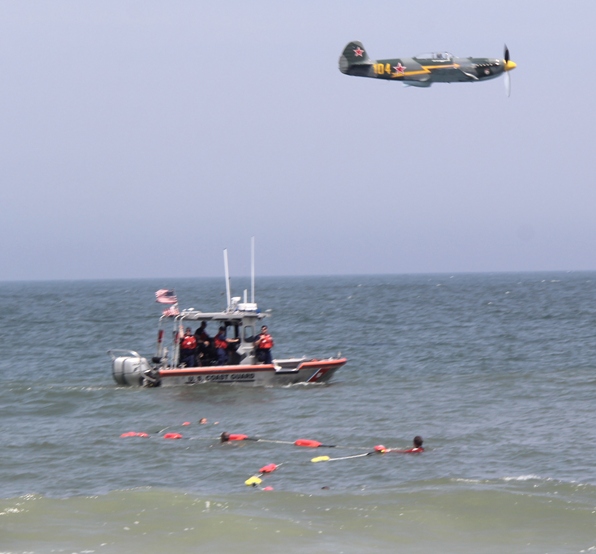 The previous drowning happened on June 2nd when an 18-year-old man from Montgomery County also became caught in a rip off 137th Street.

The Ocean City Beach Patrol reminds beach goers to check in with the lifeguard on duty every time you come to the beach. The lifeguard will inform you of current conditions in your area of the beach, including signs of inclement weather, rip currents and dangerous shorebreaks.

This WGMD interview by Jon Budler is with Rehoboth Beach Patrol Capt. Kent Buckson who talks about the dangers of rip currents.

This is the main swimming beach parking lot late Tuesday afternoon. News crews from Washington, D.C., Baltimore, Philadelphia and Salisbury were among those who reported on the teen bitten by what experts are saying was a juvenile sandbar shark.

The victim, 16-year-old Andrew Vance, was attacked around 4:50 p.m. Monday, just as guards were going off duty. WTTG-TV (Fox5) interviewed Vance by phone on Tuesday about the ordeal.

Here is part of the news conference from Collin O'Mara, DNREC secretary, when he reopened the waters to swimming.

You can follow Vance and his recovery on his Facebook page and view/read the other reports that have made him famous.

Police have arrested a Rehoboth woman who stole a backpack from a foreign exchange student in the Epworth United Methodist Church.

The theft happened during the church soup kitchen last Sunday, June 8. Cpl. Gary Fournier, state police spokesman, says 43-year-old Gina L. Sautter was arrested on Tuesday, June 10, for the theft of a backpack which contained approximately $150. The backpack belonged to the exchange student. 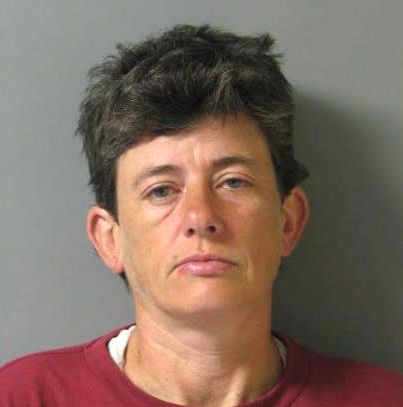 Cpl. Fournier said she was arraigned on the theft charge as well as some other unrelated charges of burglary, theft and criminal mischief in which she is accused of breaking into the Rehoboth Beach Little League concessions stand on Holland Glade Road and stealing food items and candy.

Rehoboth Beach Police Department also arrested her and she is now incarcerated at Delores J. Baylor Women's Correctional Institution in default of bond.

Come check out all Rehoboth has to offer ...

Outbound traffic was brought to a crawl just before 6 p.m. Sunday after a fender-bender was reported on the Rehoboth Beach drawbridge.

At least eight Rehoboth Beach Patrol lifeguards, including Capt. Kent Buckson, were at the scene. It is unclear what involvement they had, if any, with the accident. 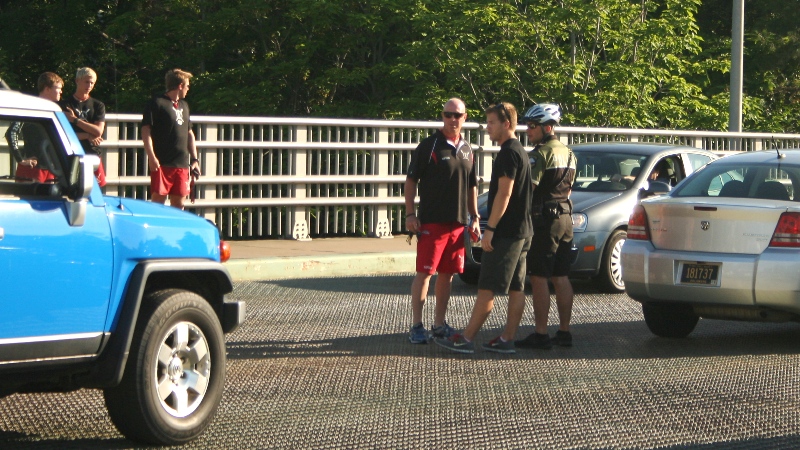 An ambulance responded for a 20-year-old woman who complained of neck pain.

Police have not yet released any details as of Sunday evening.

For all your heating and cooling needs, please click here ...

FRIDAY NIGHT DOWNPOUR IN REHOBOTH BEACH LEADS TO SOME FLOODING

Water accumulated at the usual trouble spots, the second block of Wilmington Avenue and Lake Avenue near Rehoboth Avenue behind Hotel Rehoboth.

Police blocked both locations until the water subsided. 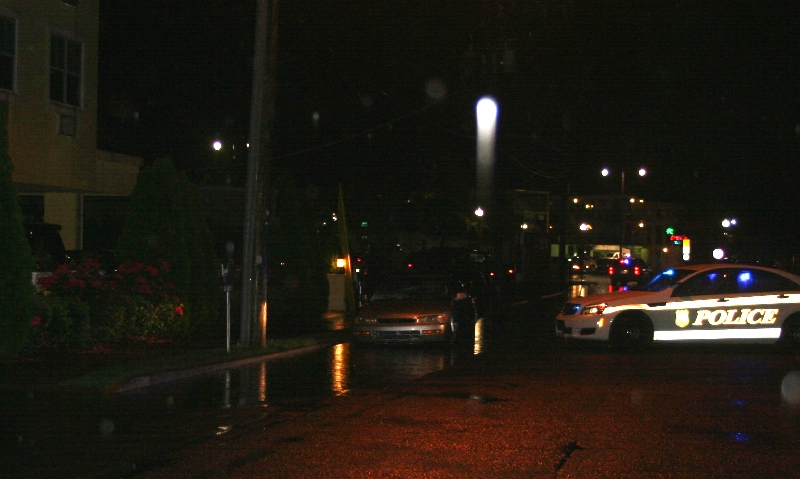 According to the Rehoboth Beach DEOS weather station, the town received less than two inches of water Friday.

Rehoboth Beach police released these photos from a security camera at the Crosswinds Motel at 312 Rehoboth Avenue.

Police need help to identify the man shown in the surveillance video.

He appears to be a black man, 150-200 lbs, approximately 25-35 years old, wearing a dark-colored short-sleeve shirt and tan pants. Police say he entered the parking lot around 7 a.m. last Sunday, June 8. The man is seen walking around the lot until he spotted a bike in the stairwell.

He returns with a late-model blue SUV, maybe a Kia Sorrento, and cuts the lock on the bike, a 2009 gray Trek Soho.

He places the bike in the rear hatch of the SUV and leaves the parking lot.

Anyone with information is asked to contact Sgt. Raymond Edwards of the Rehoboth Beach Police Department at 302-227-2577 or submit a tip to Crime Stoppers at www.tipsubmit.com.

WGMD's Jake Smith interviewed Jeff Balk, owner of Snyder's Candy and VisitRehoboth.com, live on the air this past Friday.

Balk said Snyder's Candy opened in 1940 and this is his eighth summer owning the business.

"We will celebrate our 75th anniversary next year at 60 Rehoboth Avenue and have been locally owned all these years," he said. 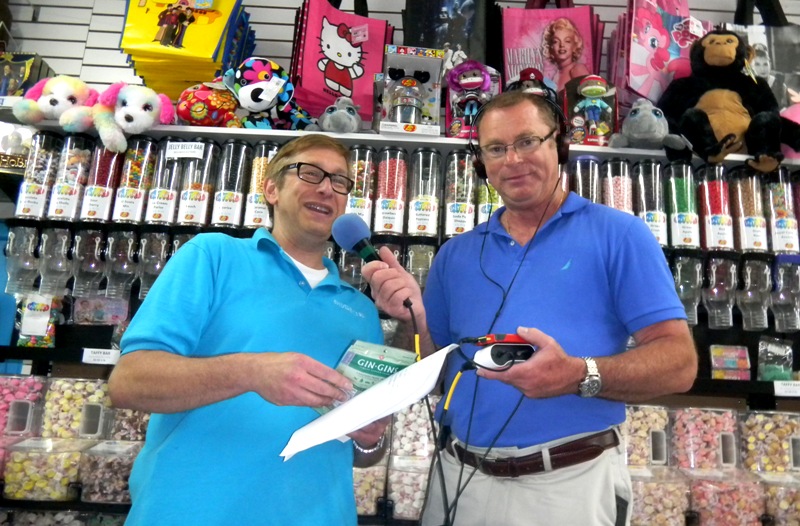 Balk notes that "Snyder's Candy is unique as we have the largest selection of candies at the beach, with over 80 varieties of licorice from around the world, 72 bins of pick-your-own saltwater taffy, a gummy bar where you can mix and match over 40 varieties of gummies, and a wall with 45 varieties of Jelly Belly including the new draft beer flavor." He also carries cases of chocolates, chocolate-covered pretzels, fudge, old-time candies and retro toys like Pez and Spirograph along with more than 50 styles of lunch boxes!

Balk has expanded beyond candy. He is also in the Internet business. He purchased VisitRehoboth.com three years ago and it re-launched last month with a new design and he says he is still adding new features and soon will offer the Henney Report and other local columns. Balk says he plans to launch another website, VisitLewes.com, in the coming weeks.

The opening concert for the Rehoboth Beach Bandstand 2014 Summer Concert Series kicked off this weekend. Friday's performance was canceled, but the crowds returned Saturday evening for the first concert of the season.

Scheduled to play this past weekend were Love Seed Mama Jump, The Rad Trads and The Uptown Band. 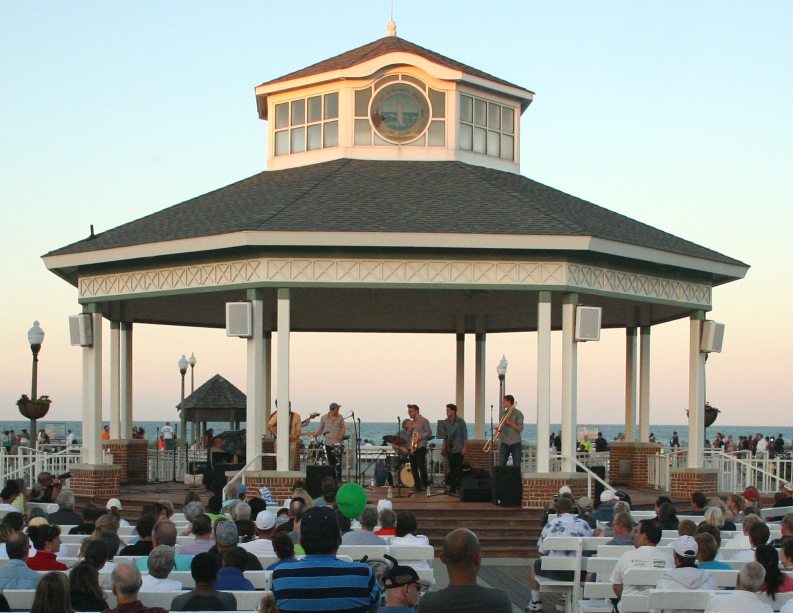 There will be much more free entertainment this summer. See the Rehoboth Beach Bandstand website for details. 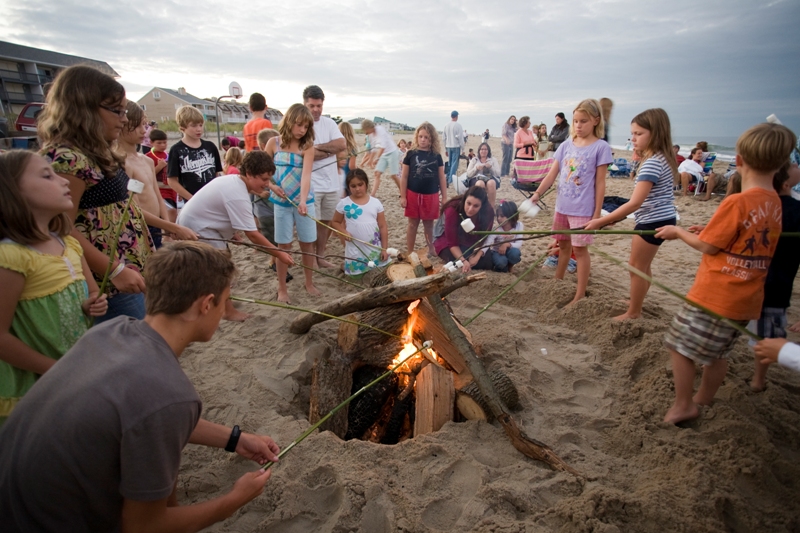 The Morton Galley in Rehoboth Beach hosted an exhibition by John Schlimm, an artist and emcee of this weekend's vegfest. He is also the author of the Book of Compassion Art Series.

The exhibition includes 34 panels, stencils on canvas. He calls it "participatory art" because visitors are encouraged to take home letters from the word COMPASSION and plant them in a secret place... so we can "watch compassion grow." 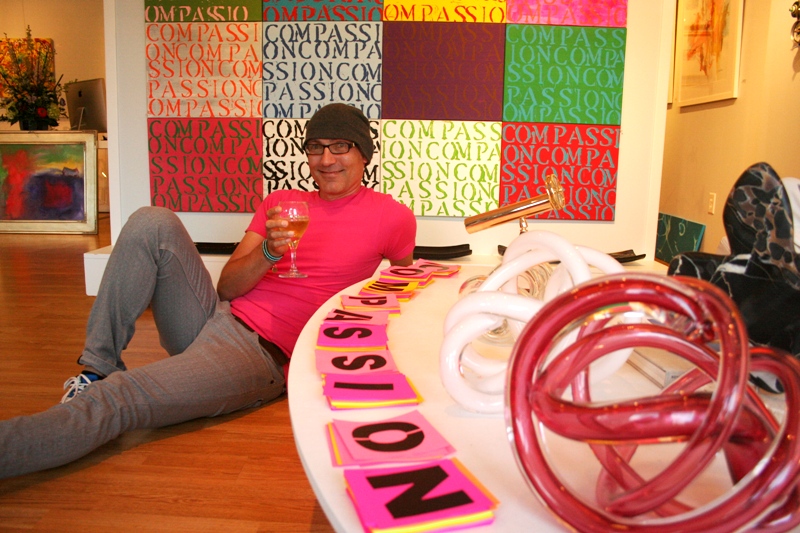 He has authored more than a dozen books covering vegan eating and beer. He said he hopes his works will "inspire."

New this season hanging at the Morton Gallery include iconic works, Boardwalk Rides and Bob Land, by artist Tara Funk Grim, below.

For more on the Morton Gallery, please see the gallery's website or come visit the gallery at 47 Baltimore Avenue. The Philip Morton Gallery has once again won the Best of Delaware 2014 award featured in Delaware Today.

Ward Ellinger has started the summer off with vibrant color and more new unique works.

He paints these works horizontally on the canvas using acrylic paints mixed with water. This prevents the paint from running.

This is Ellinger's Momentum. It has that old oriental feel. As the viewer comes closer, the work changes visually. 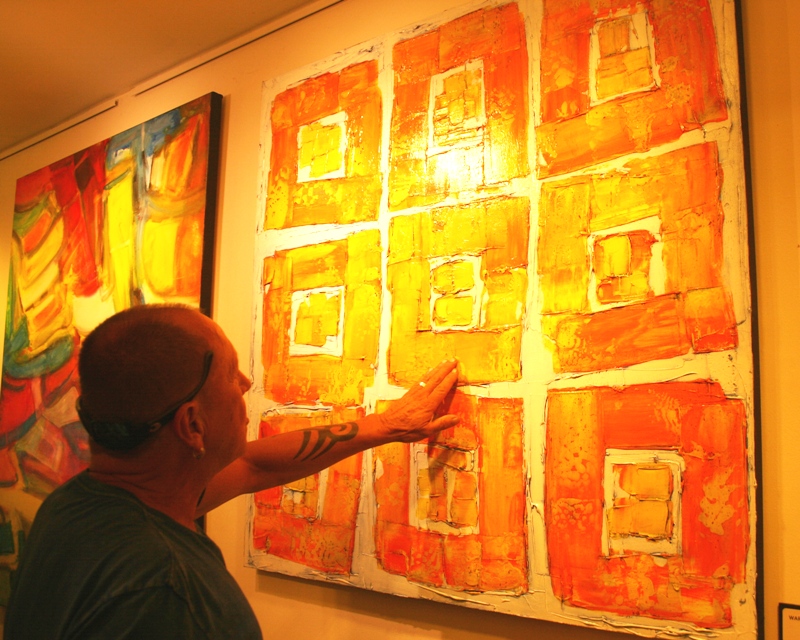 This is his Abyss which features five shades of blue serenity colors. 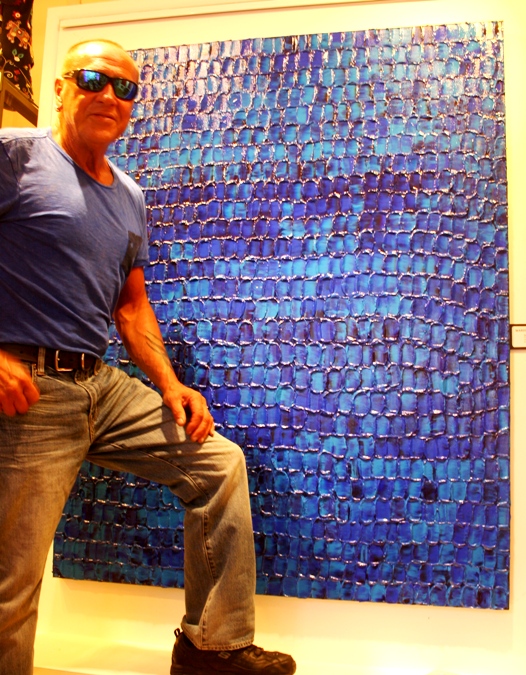 These photos do not convey the power of his work. It is best to view them in person at the Ward Ellinger Gallery in the CAMP Rehoboth courtyard at 39 Baltimore Avenue.

TODDLER NEARLY CHOKES TO DEATH ABOARD CAPE MAY-LEWES FERRY; SAVED BY GOOD SAMARITAN--- Officials are trying to determine who helped save a 15-month-old boy who was choking on a crayon while on board the Cape May-Lewes Ferry. Joe Hopple, Sussex County EMS spokesman, said EMS crews received a call just before 5:20 p.m. Sunday that the toddler had stopped breathing and was starting to turn blue and had gone limp. It took almost 25 minutes for the ferry, the Motor Vessel Delaware, to arrive at the Lewes terminal to meet EMS crews. At some point, Hopple says an unknown bystander administered basic first aid and saved the child's life. He noted that the toddler was crying when he arrived at the Lewes terminal, which is always a good sign for a child who had been choking. The person who saved the child left the ferry and Hopple said Sunday evening that they still do not know who the hero is.

COMMISSIONER CANDIDATE BIOS UPDATED--- Please see last week's report for some last-minute updates from the candidates, including Larry Myslewski, who have filed to run for one of the two Rehoboth Beach commissioner seats.

MAN BEATEN WITH CROWBAR, TAKEN TO BEEBE--- State police are investigating a serious assault that was reported around 9:25 p.m. Sunday in the 34100 block of Barbage Rd in the Millville area. A 43-year-old man was struck with a crowbar in the head and side of his body. He was taken to Beebe Hospital. No suspect information was available as of Sunday evening.

One dead, four injured in head-on crash on Rt.404 east of Bridgeville.

This report is being e-mailed to 1,811 recipients. Thanks for your support!