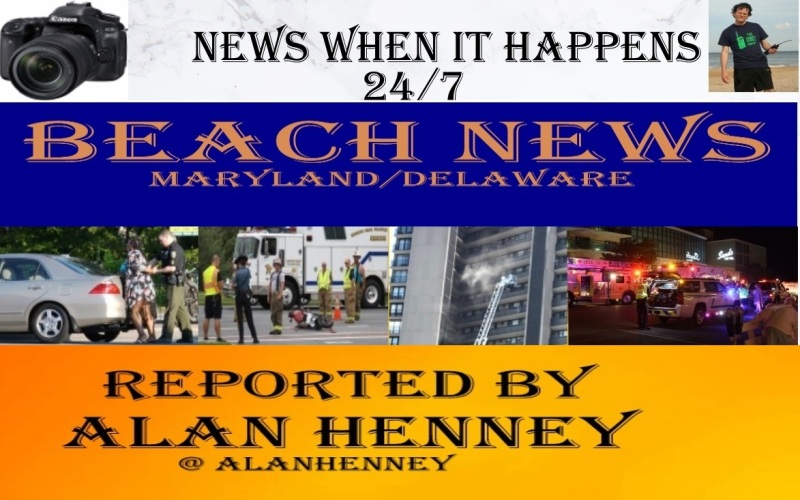 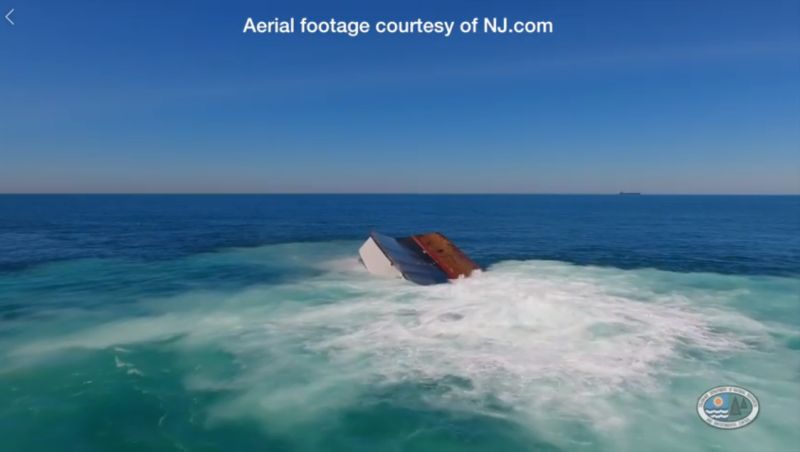 The 320-foot long Motor Vessel Twin Capes was christened 43 years ago, completely refurbished in 1996 and, after thousands of ferry runs between Cape Henlopen and Cape May, now rests on the ocean floor 29 miles east of South Bethany as part of Delaware's artificial reef system. Officials sank the decommissioned ferry just before noon this past Friday at the Del-Jersey-Land Inshore Artificial Reef -- a reef so named because it is equidistant from Lewes, Cape May and Ocean City. 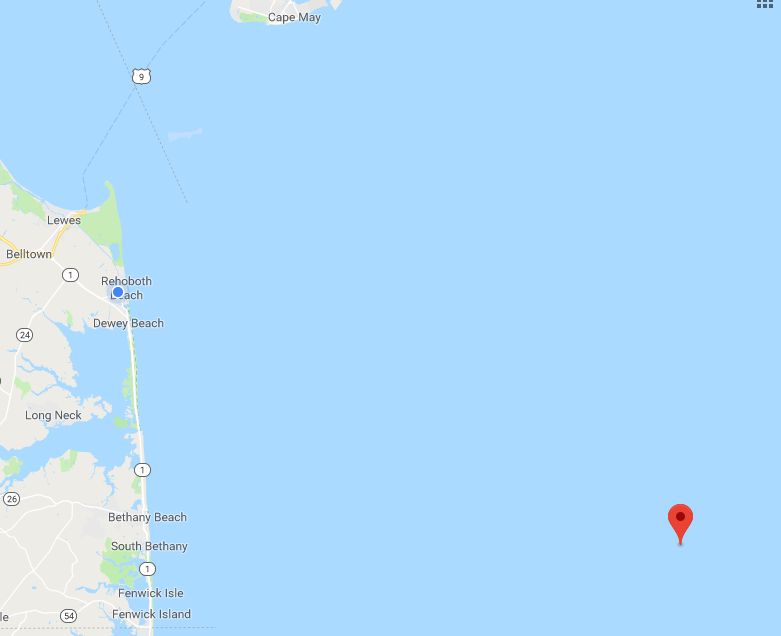 This video of the sinking ship posted by Brian Mc on Facebook has already gotten more than 814 thousand views in less than two days!

Twin Capes has joined the Del-Jersey-Land reef's submerged fleet that includes the ex-destroyer, the 568-foot USS Arthur W. Radford, which went down in 2011 as the longest ship reefed on the East Coast, and the Zuni/Tamaroa, the one-time harbor tug and Battle of Iwo Jima survivor-turned-US Coast Guard cutter that sailed Atlantic waters for almost 50 years.

Visitors fondly remember the 2,100-ton Motor Vessel Twin Capes which was one of the original three ferry vessels from the 1970s fleet. After an extensive renovation completed in 1996, the vessel was retrofitted with a new superstructure and four new decks, multiple lounges, a new pilot house and the distinctive "shark-fin" smokestacks. 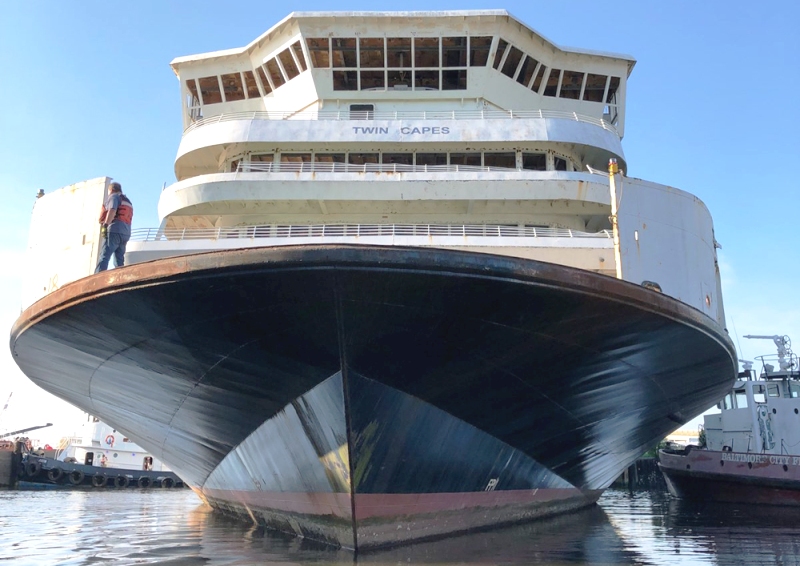 The vessel, as this wikipedia article points out, was a mini-cruise ship complete with two sets of elevators, a sweeping interior staircase, interior areas on four different decks, an enlarged retail shop, a food court with a brick pizza oven, four different bars, and a buffet restaurant in a two-deck-tall, glass-enclosed atrium.

The city's ribbon-cutting ceremony marking the completion of the ocean outfall project went without incident despite concerns that officials might be faced at the Deauville Beach event by protests. Friday morning's event, which was announced on the city's website the same morning as the actual ribbon cutting, was attended by about three objectors, at least one of whom wore an anti-outfall T-shirt. But there was no confrontation. Police have been watching this area closely after anti-outfall stickers had been discovered in the recent past and helped secure the area hours in advance.

The Delaware Center for The Inland Bays praised the event later in the day on its Facebook page stating that 17,000-pounds less of straight nitrogen and 1000-pounds less of phosphorus pollution will be entering the bay now. The partnership that led to this action is an example of how environmental management should be done, Chris Bason, Center for the Inland Bays executive director, had said.

The project involved agencies at all levels of government. Rehoboth Beach Comm. Kathy McGuiness said they were "celebrating the persistence of partnerships. 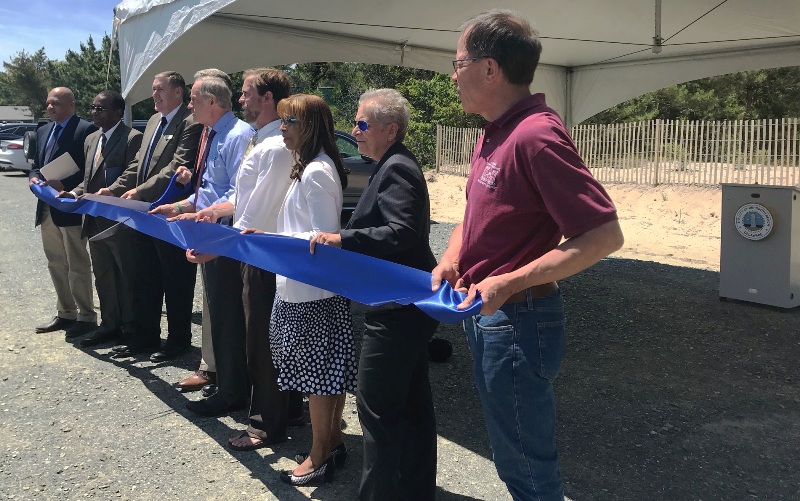 Among those attending was Senator Tom Carper, who explained that support and help with state revolving funds was a good way to leverage federal monies through these types of partnerships. 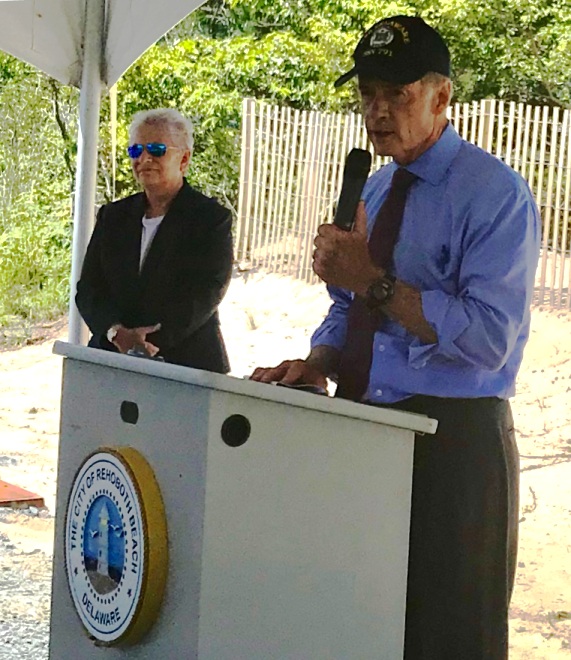 Gary Glass, one of the three candidates for the two soon-to-be-open commissioner seats in Rehoboth Beach, held his first public meet-and-greet this past Saturday at the lovely home of Kate and Bunky Markert. More than 40 people attended including current Commissioners Patrick Gossett and Jay Lagree, who both decided not to run for reelection in the upcoming 2018 municipal election. They were accompanied by former Commissioners Lorraine Zellers and Bill Sargent, and Susan Gay who ran last year. The tradition in Rehoboth Beach had been to start serious campaigning after July 4. But Glass is trying to get a head start. 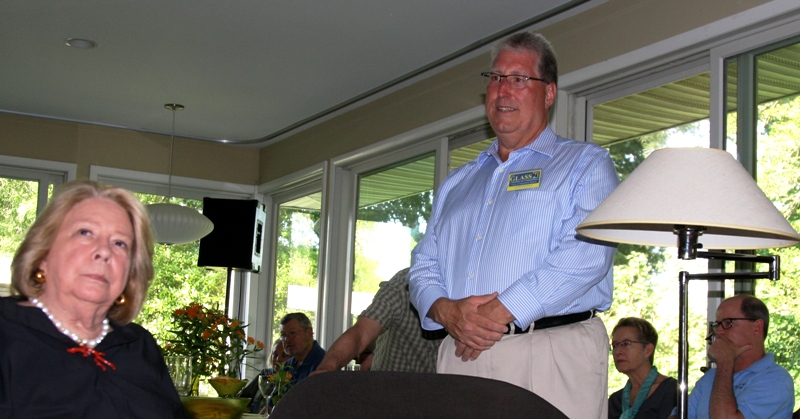 Probably the most common concern expressed by those attending is the continued commercialization of Rehoboth's residential neighborhoods. This includes homes owned by private companies that are built to the maximum size allowed, often with a swimming pool, and are rented sometimes for just one night.

"I support the homeowners and the people that actually lay their head on a pillow and go to sleep in town," Glass said. "I think those people should have the greatest say in a government over their destiny, their financial security and their quality of life."

The other two commissioner candidates are Richard Byrne and Patricia Coluzzi. No new news from Coluzzi this past week but Byrne says, among other things, he visited the Cape Henlopen Senior Center last week for the pancake breakfast fundraiser. He is pictured here with Commissioners Stan Mills, Kathy McGuiness and Lisa Schlosser and Richard Kaplan, the senior center interim president. 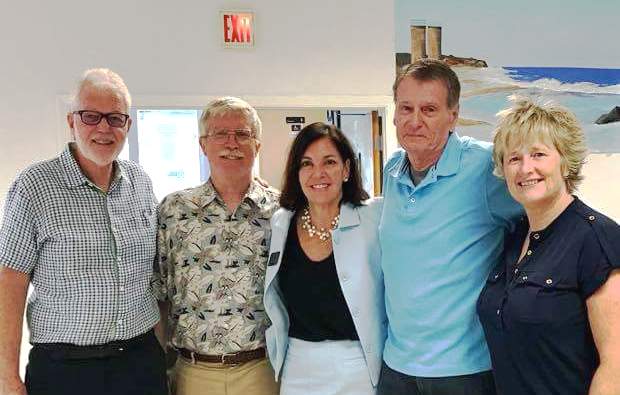 "The 'seniors' are saying what I've been saying as a candidate," Byrne states. "They want the City to continue to protect the things they love about the City they live in -- keep our City clean, safe and friendly and keep the downtown business areas vibrant and thriving with easy parking options, and maintain the sidewalks and streets."

The deadline to register to vote in the August 11, 2018 election is July 12. See the city's website for info.

BETHANY BEACH REPLENISHMENT BACK ON TRACK!

The beach replenishment project -- which will cover Bethany through Fenwick -- has been making great strides this past week with the assistance of a second dredge. "For most of the first two weeks the replenishment project was on the beach, little to no progress was made," the town stated in a recent e-mail message. "That has now changed dramatically" thanks to the second dredge. See WGMD.com for more.

YES, THAT WAS THE OHS CRAB AT THE RUSTY RUDDER!

The Delaware Office of Highway Safety (OHS) has been deploying its street teams to educate the public about pedestrian dangers at the beach. This was the OHS Crab at the Rusty Rudder this past Thursday evening posing for selfies with visitors. The street teams also hand out glow-in-the-dark bracelets and reflectors for pedestrians. 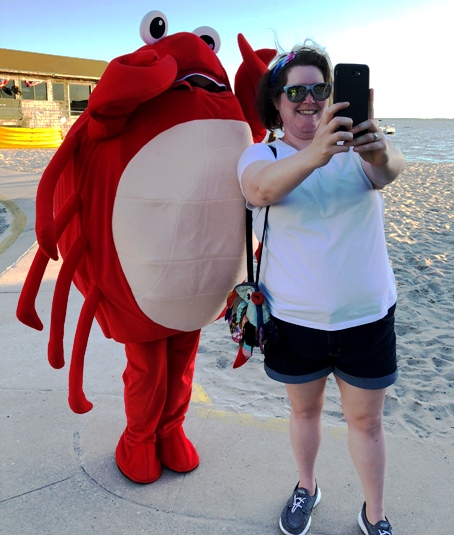 This is part of a month-long grassroots initiative designed to build awareness and educate the public about pedestrian safety at the Delaware beaches. See WGMD.com for details.

Crews have been busy the past couple weeks removing the railroad tracks in Lewes and west to just past the railroad crossing of Lewes-Georgetown Highway. 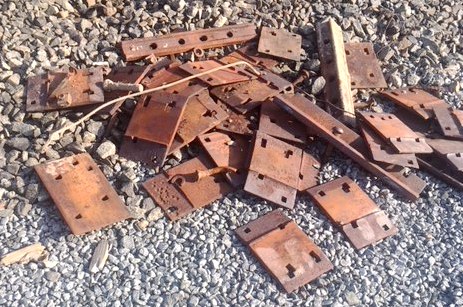 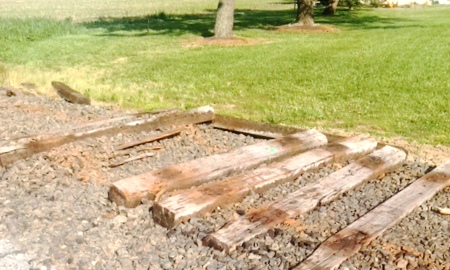 Crews have stacked the iron on the old railing behind the library in Lewes where they will preserve a section of the historical track. 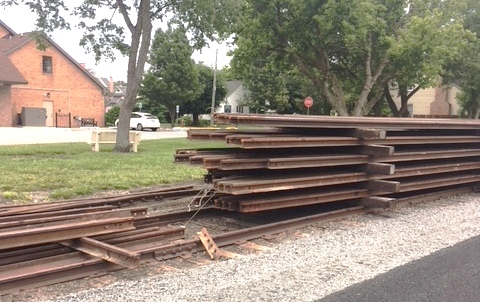 Sections of the former railroad will be converted to trails. 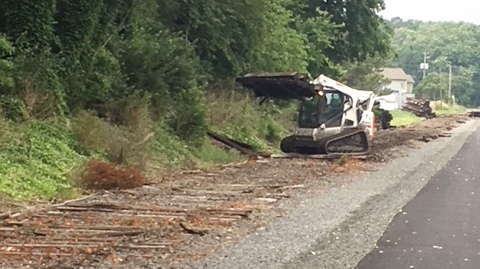 More details are in this Cape Gazette article by Ron MacArthur.

The Rehoboth Art League opened its 45th annual members' fine craft exhibition this past Friday featuring the work of 30-some member artists. "The majority is very fine craft which sort of blurs the edge of fine art and craft," says Jay Pastore, RAL's artistic director who has been curating the shows for the past four years. The RAL has actually been hosting this exhibition for the last 80 years, he explained, but 45 years ago the RAL split the members' fine art and members' fine craft from a single larger show. 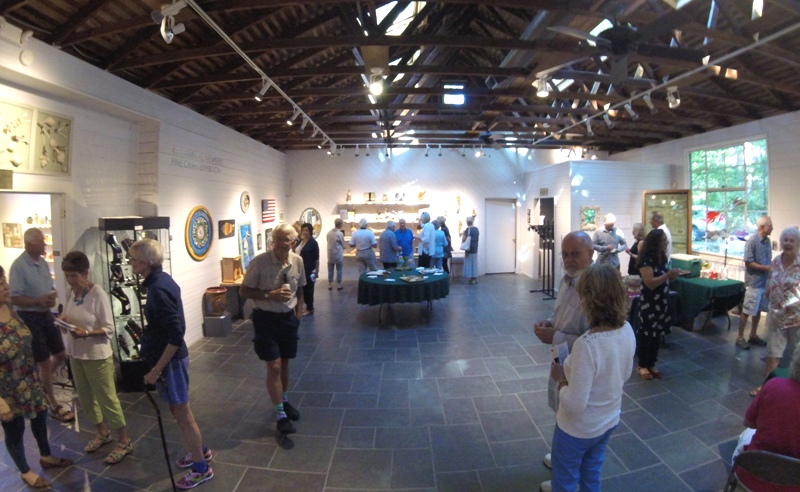 "This show has really grown since I have been here," Pastore points out, "I think particularly because we are curating master-level artists to sort of spotlight exhibitions. The award winners are doing spotlight exhibitions which add a whole level of skill and talent to the crowd," he observes.

An exhibition currently in the Tubbs Gallery spotlights award winners from last year's members' fine craft exhibition. Two new solo-shows of fine art appear in the Ventures Gallery featuring Susan Frey, who is a member artist, and in the Homestead Gallery featuring Megan Burak who is a young artist who graduated from Salisbury University.

Gail Gingrich, one of the artists with work on display, lives on Broadkill Beach and collects items from the beach and uses a set of grinding wheels to help slice and polish stones. "It is kind of fascinating to see what is inside these stones," she says. She hand-fabricates all her work using copper and silver and includes stones only from the beach in front of her home! The stones have been polished, tumbled and often her mountings are inspired by the stone. 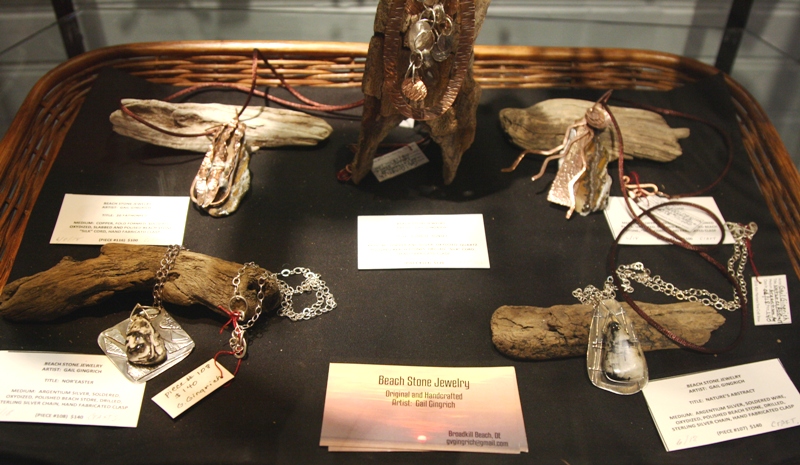 These two mixed media and paper works by James Ulry are interesting in that if one keeps looking at them, different shapes and patterns become apparent. One viewer might see a woman and another sees the State of Delaware! Shown here are his works, Ms. Della and Mason-Dixon, the Divide. 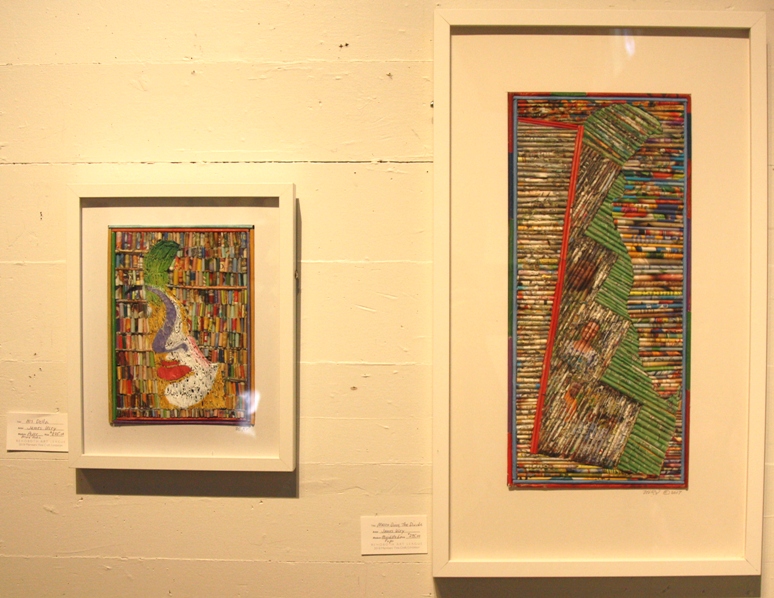 "We had a great judge who was here who gave a talk and she had some interesting comments about how a lot of the work here reflects the regional landscapes and just being on the water... it was a good observation," Pastore pointed out.

This work in fiber is not a local landscape, but could almost pass as a local barn! It is the Wyoming Homestead by John Flourney. 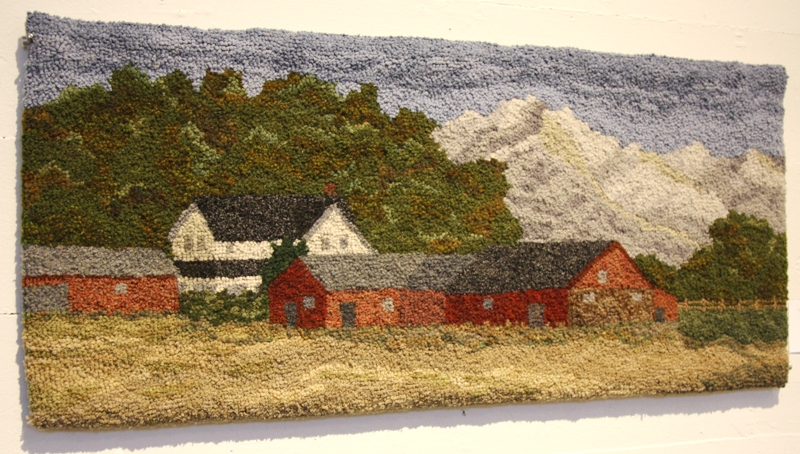 These exhibitions will be on display through July 22. Please see the RAL website for details.

The 3.1-mile 28th Father's Day 5K Run ended here, at Wilmington Avenue and the boardwalk this past Sunday morning. It was a benefit for the Seashore Strider Youth Cross Country Team.

The race was followed by a party at Zoggs Raw Bar and Grill.

MANHUNT FOR BURGLARY SUSPECT OUTSIDE REHOBOTH--- Delaware State Police searched for a burglary suspect who broke into a home outside of Rehoboth just before 11 p.m. last Wednesday night in Canal Corkran. Troopers searched using the helicopter and on the ground using a police dog. But the burglar got away. MCpl. Melissa Jaffe, police spokeswoman, said she had no suspect info.

MAN FOUND PASSED OUT BY BEACH RAKING TRACTOR OPERATOR--- Rehoboth Beach police issued a civil citation to a man who was discovered passed out on the beach near Funland around 3 a.m. last Friday by the operator of the tractor pulling the beach rake. Beach tractor operators are especially concerned after last summer's incident in Ocean City that killed 30-year-old Ashley O'Connor.

EMPLOYEE BURNED IN HOTEL KITCHEN--- An employee was burned during a kitchen fire at the Clarion Resort Hotel around noon last Friday at 10100 Coastal Highway in Ocean City. The building was in the process of being evacuated when firefighters arrived but the fire was actually extinguished by a sprinkler.

6 boardwalks within reach of D.C. offer a path to the beach - and summer fun

7 tips for buying beach real estate in Delaware and Maryland

What's the best beach for the money?

Selling beach property? 8 ways to get the best price

Chuck Snyder named producer of the year for Jazz Festival

Dewey Beach, one of the happiest places in America

The Town Of Millsboro continues to grow