Rehoboth area residents have been on edge after police acknowledged a suspected gang fight last Saturday in town, and state police have confirmed five robberies and/or assaults just outside town in the past month.

One police source says the fear is that some of these violent robberies or assaults could be a gang initiation or otherwise gang related.

More than a half dozen state troopers assisted Rehoboth Beach police late Wednesday into early Thursday. The troopers patrolled inside and outside Rehoboth Beach. They stopped this car in the second block of Rehoboth Avenue after a man was assaulted and injured by several suspects near the bandstand.

Three men were inside the car and were eventually released after the traffic stop. No word if police suspected any gang involvement.

For more details, see this report from WBOC's Michael Lopardi, WGMD police chief interview, WGMD's report on the robberies, this article from the June 22 Cape Gazette or this one from the June 23 News Journal.

Some people call him crude and obnoxious while others find him entertaining and part of the boardwalk's unique cast of characters.

Reaction to the arrest of the 81-year-old, who calls himself the "Fart Man," has been getting quite a bit of discussion on the WGMD Website, with more than 50 comments as of Sunday evening. 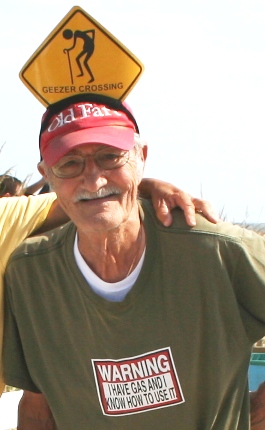 He has been a regular on the boardwalk, walking several miles a day, posing for photos and has appeared in several news articles, including most recently, this article which appeared in the local Gannett newspapers earlier this month.

Work release crews have been installing dune fencing in Rehoboth Beach this past week. 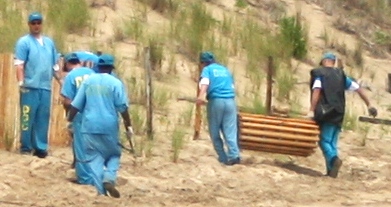 Michael Globetti, DNREC spokesman, says when the fencing work in Rehoboth is completed, the DNREC Shoreline and Waterway Management Section will move its fencing repair operations to Dewey Beach, probably this coming week.

Globetti noted that the sand fencing repairs are an ongoing project that requires normal maintenance in the aftermath of storms, winter weathering, etc.

Department of Correction prisoners under supervision and guard have been used on it (and on other DNREC projects) for years, Globetti added. "Sand fencing maintenance also goes on at Fenwick Island, Bethany and in Delaware State Parks, and stretches into the miles of replacement fence constantly erected," he said. 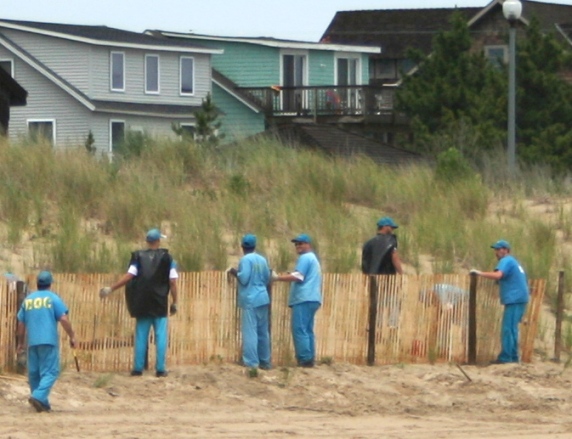 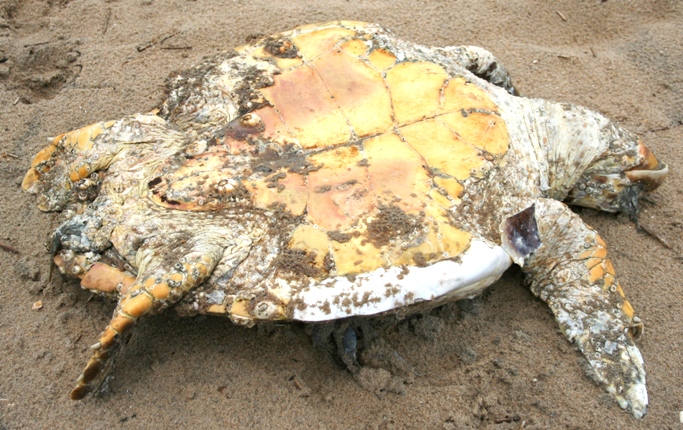 Tony Crivella was among those who spotted this dead loggerhead sea turtle washed ashore Monday morning between Dewey and Rehoboth.

Suzanne Thurman, MERR Institute executive director, says the sub-adult loggerhead was the victim of a dredge. She says another dead loggerhead was spotted floating in the surf in Fenwick on Monday, but it did not wash to shore.

Thurman says MERR has investigated four sea turtle incidents so far this year. She says in two of the incidents, sea turtles were killed by dredges which are used to pump sand.

But which dredge actually killed the turtles, she noted, is hard to say because the remains can drift for miles before finally washing to shore.

How many turtles are actually killed by the dredges is also difficult to estimate. She referred to the deceased sea turtles that actually wash to shore as the "tip of the iceberg."

Loggerheads feed off crabs on the bottom, and that is where they become victims of dredges. Thurman says they are sucked into the pipes and their shells suffer distinctive crushing injuries. "I hope it is a very quick death," she adds. She says she suspects it is, but is not certain.

When permits are granted for dredging projects such as beach replenishment, Thurman says they are given a federal permit for "incidental intake," which allows for limited sea turtle deaths. The loggerheads are listed as a threatened species.

People should be aware, she says, what happens to the sea turtles. "Education is the most important tool we have to help these animals."

Also last week, Thurman said MERR investigated a dead baby dolphin found on Indian Beach on Monday, as well as a dead adult dolphin the night before in Fenwick Island at York Crossing. She said the adult was too badly decomposed and the cause of death for the baby had not been determined.

July 16 is MERR's annual dolphin count. MERR will have volunteers at approximately 32 sites on the ocean and Delaware Bay between Fenwick Island and Smyrna. Participants will count the number of dolphins spotted between 9 and 11 a.m. to compare with previous years. This provides an idea of changes in the bottlenose dolphin population. To volunteer to help with the count, please call 302-228-5029 and leave a message.

"We had the ray at the back of the boat for a bit," he writes, and "It put up a good fight. I put gloves on to try to bring it on the swim platform but didn't get it up. Just as I reached for the lure, the swivel pulled apart and he was gone. I guess that was good for me too so I didn't get hit by his stinger."

Wikipedia says when the cownose ray is threatened, it can use the barb at the base of its tail or use its specialized canines to defend itself from the threat. It has a stinger, called a spine, on its tail, close to the ray's body. This spine has teeth lining its lateral edges, and is coated with weak venom that causes symptoms similar to that of a bee sting. It also has a set of dental plates designed for crushing clams and oyster shells. There are a series of canine teeth that are hidden behind the dental plates.

A mature ray can grow to 45 inches and weigh more than 50 pounds with a life span estimated between 13 and 18 years.

These rays reproduce slowly, as mothers usually give birth to one pup per pregnancy. Conservation status is near-threatened and the species may be at risk because of fishing.

TEEN ARRESTED FOR ASSAULT AT REHOBOTH'S FUNLAND--- Aaron Wright, 18, of Dover, was arrested on Wednesday for assault. Rehoboth Beach Police Chief Keith Banks says Wright came off the park's paratrooper ride at Funland when he was confronted by the victim who accused him of spitting on him during his ride.

After several moments of name calling, Wright allegedly pushed the victim and walked away. The victim, a 44-year-old man from Westfield, NJ, supposedly fell backwards, got his arm stuck in fencing along the exit of the ride and suffered an obvious dislocation of his shoulder. He was in extreme pain when taken by ambulance to Beebe Hospital. Funland management said it had no comment about the incident.

BOY TAKEN TO BEEBE WITH SUSPECTED DUNE FENCE WIRE IN FOOT--- An 8-year-old boy was taken to Beebe Hospital after what appeared to be a piece of dune fence wire became impaled in his foot. It was reported just after 2 p.m. Thursday in the Delaware Seashore State Park at Tower Road. EMS personnel said they could not determine how deep the wire penetrated his foot.

JET-SKI WATER RESCUE--- Milton, Lewes and Slaughter Beach fire companies responded to a water rescue around 8 p.m. Friday. A Jet-Ski reportedly broke down and the operator was experiencing trouble returning to shore off Prime Hook Beach. But the operator was back on shore in less than 15 minutes.

MAN FLOWN TO TRAUMA CENTER AFTER SURF INJURY--- The only medevac in Ocean City this weekend was for a 55-year-old man who suffered a neck and back injury while in the ocean at 50th Street. It happened just before 11 a.m. Sunday. The man was experiencing paralysis and no feeling in his feet. A state police helicopter landed at Jolly Roger to fly him to a trauma center.

The search for sea glass