WHAT WILL TUESDAY NIGHT BRING AT DEWEY'S NORTHBEACH?

An estimated 1000 people had packed Northbeach this past Tuesday for a $1 drink special when police say rowdy patrons became engaged in arguments and fights. 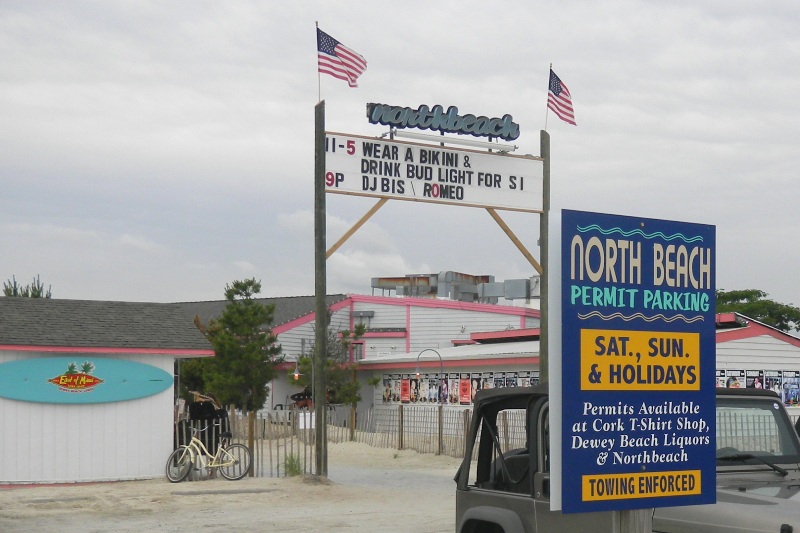 At one point, Sgt. Dempsey says the crowd stretched from the Northbeach parking lot almost to Coastal Highway at Dagsworthy Avenue.

The state police, Delaware Alcohol and Tobacco Enforcement, and police dogs from Lewes and Milton came to assist Dewey Beach with crowd control.

Both Wawas between Rehoboth and Lewes closed until the crowds left the area. Some groups frequently meet there to continue their disputes.

"This promotion by Northbeach is now threatening the health, safety, and well-being of the citizens and visitors to Dewey Beach," Mayor Diane Hanson said Sunday. "The Dewey Beach police have done an amazing job in keeping things under control. We are working hard to find a permanent resolution to the situation," she added.

But Alex Pires, owner of Highway One which includes Northbeach, disagrees with the details reported. "Your story is not true... don't know where you got it from... we have been doing Tuesday dollar night for over a decade... last Tuesday there were no arrests," he stated. He noted that, like many nights, fake IDs were confiscated and when alcohol enforcement agents seize one, a ticket is issued to the person who attempted to use the fake ID. But "beyond that we had, as usual, no incidents... please check your facts," he said.

Furthermore, Pires added that "no police were ever at Northbeach... it's private property and we don't allow them to park on our private property, so if they told you they made an arrest on our property-- it's also not true."

Sgt. Dempsey said the police department plans to supplement the Tuesday night shift with extra officers. "We need to make sure we have adequate staff to protect our officers, the Northbeach staff and the patrons if the crowds become unruly again," he said.

The Shuman, a U.S. Army Corps of Engineers (USACE) research vessel, has been conducting a hydrographic survey of the Indian River Inlet and vicinity since June 9.

Stephen Rochette, USACE spokesman, describes the Shuman as a 65-foot hydrographic survey vessel, capable of single-beam and multi-beam surveys. The vessel also collects bottom samples, conducts side-scan sonar surveys, and serves as an inspection and reconnaissance platform when needed. The Shuman has been in service since 1970 and plays a critical role in keeping the nation's waterways safe for navigation. 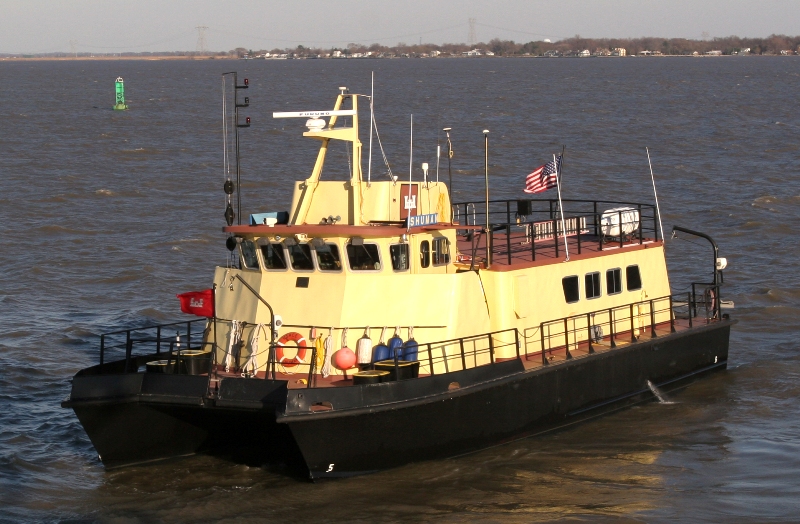 Such hydrographic surveys are typically used to determine depths, Rochette noted. They create a detailed, quantitative map of the bottom, with depths referenced to the standard U.S. surveying vertical datum named "NAVD88" [North American Vertical Datum of 1988], which is approximately equal to mean-sea level along coastal Delaware.

This 2014 survey operation, Rochette said, will update the last complete survey of the Indian River Inlet vicinity performed in 2011 prior to the impacts of Hurricane Sandy in October 2012. The USACE has surveyed the impacts that Hurricane Sandy has had on sediment distribution on the ocean shoreline through conventional surveying methods. However, a complete, new hydrographic survey is needed to document changes in depth and sediment distribution on the submerged portions of the project area.

The USACE Philadelphia District is collaborating with DNREC and the University of Delaware Center for Applied Coastal Research in a program to improve understanding of sediment transport pathways and rates, both of which affect the stability of the inlet channel and the adjacent ocean shorelines.

The data and maps will also be made available on the USACE website.

A few smaller vessels may continue to be in the Indian River Inlet area to continue this research.

A team from the MERR Institute investigated the death of a loggerhead sea turtle found Sunday in Dewey Beach.

The smelly and decomposed remains were reported by lifeguards Sunday morning off Chesapeake Street. 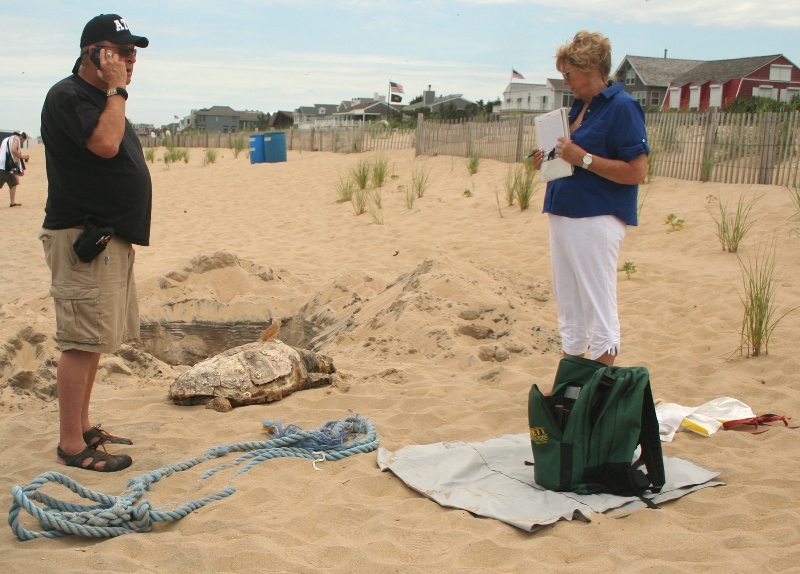 She said the cause of death in both cases was undetermined, although the Slaughter Beach turtle was suspected of being caught in a net.

Dewey lifeguards had dragged the turtle near the sand dunes and dug a ditch to bury the remains after the investigation concluded.

A Delaware seashore study will attempt to better correlate surf injuries to ocean conditions with the ultimate goal of being able to warn swimmers which days are most dangerous to be in the ocean.

The study, a continuation of research from previous seasons, includes the efforts of Dr. Paul Cowan, an E.R. physician at Beebe Hospital, and the University of Delaware along with DNREC and the Center for Applied Coastal Research. 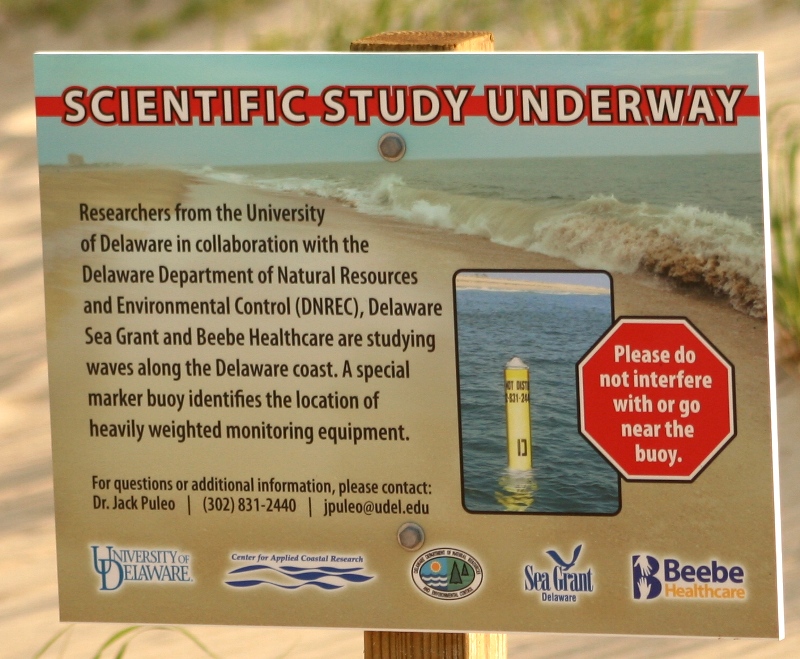 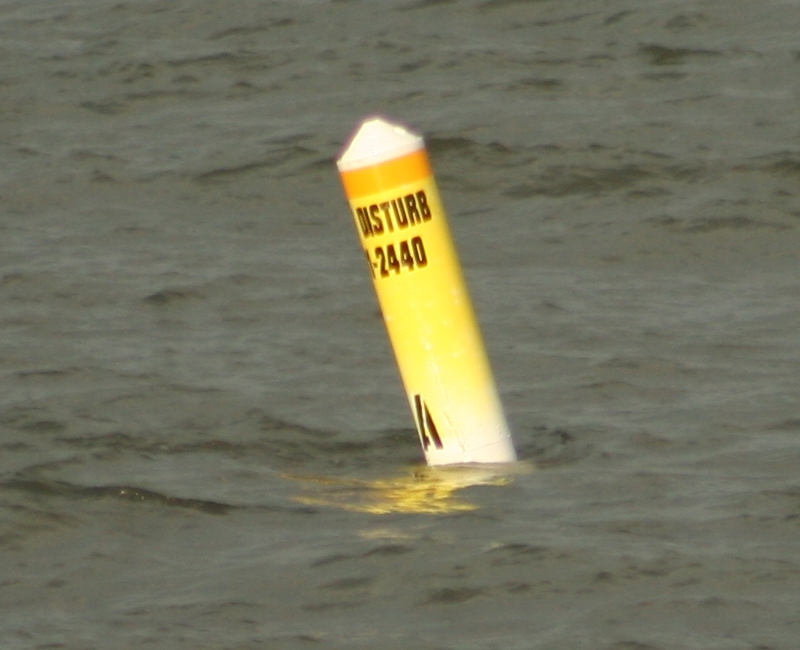 For details on the study, see:

The Rehoboth Beach Patrol lieutenant stand for the Hickman Section was set on top of the rental shack and another chair was broken.

The one chair had a busted board and was also from the Hickman Section, at Saint Lawrence Street. Public works crews replaced that chair later in the day. 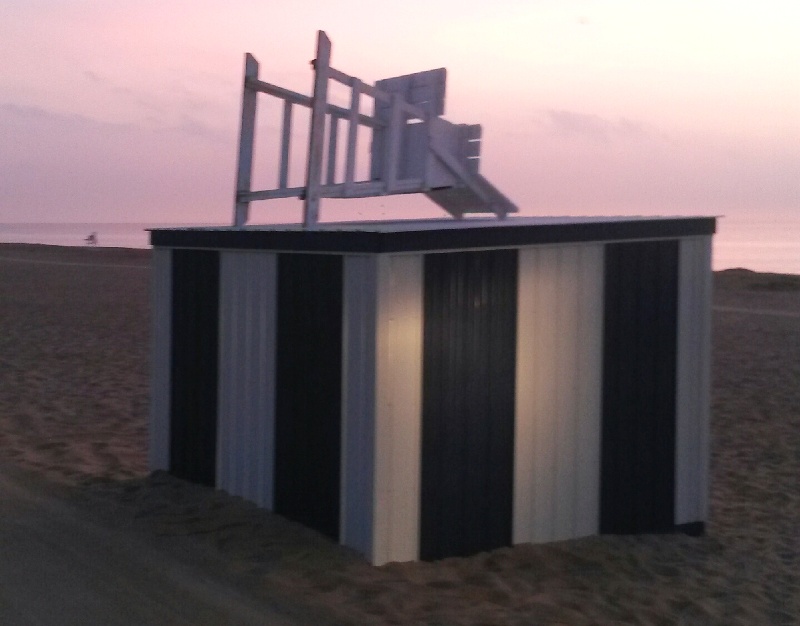 The partnership between the beach patrols was proposed last winter when Mark McCleskey, an OCBP alumni, learned that an average of more than 7,100 people drown each year in Brazil. Knowing that drowning is one of the most preventable causes of accidental death, McCleskey suggested a partnership between the two beach patrols to facilitate an essential exchange of information between the Maryland shore and the beaches of Brazil.

Coronel Andrade participated in the OCBP surf rescue academy along with approximately 40 OCBP rookies this past week. "Although he was only here for only a week," says Kristin Joson, OCBP web editor and PR coordinator, "I feel we have made a life-long connection and friendship in life saving with the country of Brazil." 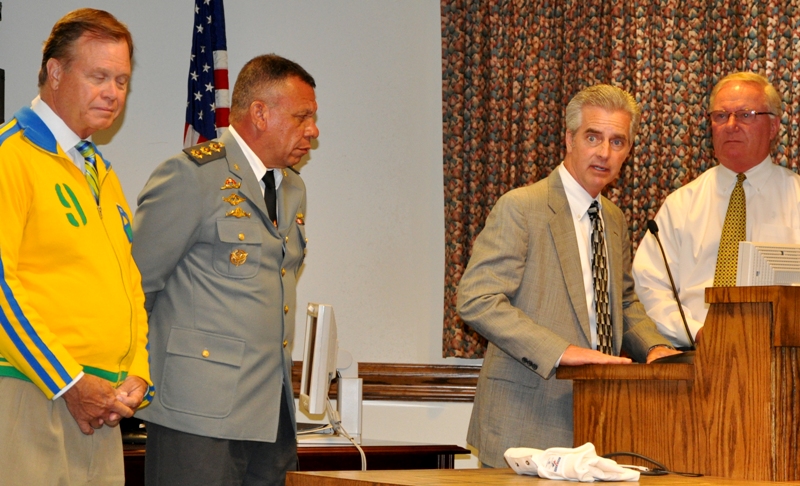 Come check out all Rehoboth has to offer ...

Anita is the Queen of Expressionism in Rehoboth! Viewers can feel and enjoy the thoughtful emotion emanate from her work.

She has painted more art inspired by the lifeguards. Both her sons have been on the patrol and one is again this summer.

This is her Dashing Rookies painting. She explains how she gains inspiration from such young athletes. Her work captures the guard's authority and power along with a striking color contrast. 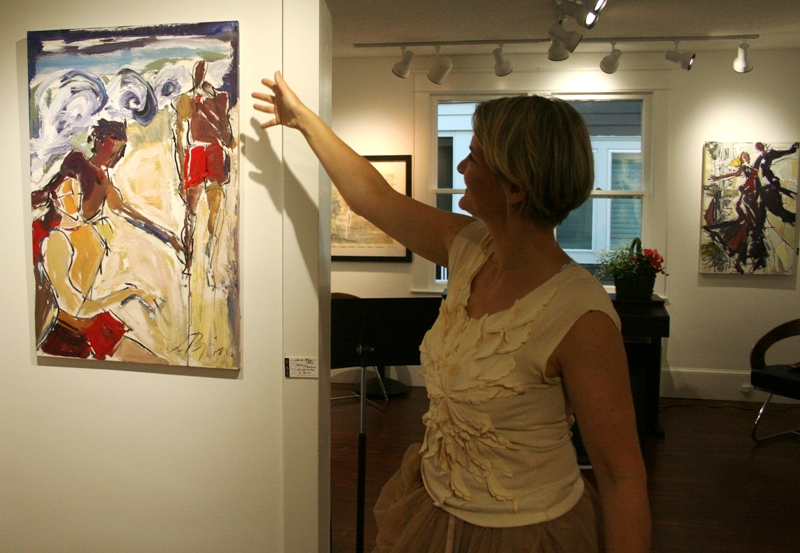 See the article about her other recent work, The New Romantics, in the Cape Gazette.

In addition to paintings in her gallery, she offers belly dance every Thursday from 6:30 to 7:30 p.m. with Viviana Matthews and monthly Argentine Tango gatherings.

The Anita Peghini-Räber Gallery is at 49 Baltimore Avenue in downtown Rehoboth Beach and is well worth an extended visit.

The Rehoboth Art League is featuring the works of local artist Cassie Taggart at the former McQuay's Market on Rehoboth Avenue.

She has more than 25 artworks on display including oils, acrylics, collages and photos. 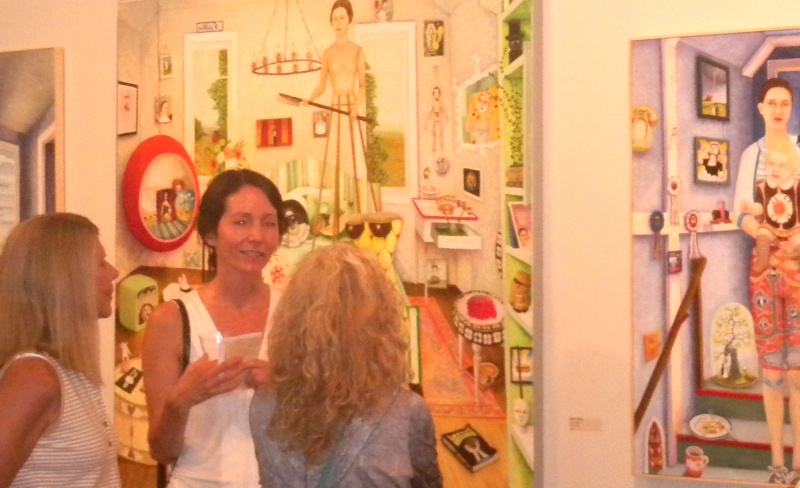 "There is no such thing as truth in life or in art," she writes in the show's brochure, "and so I present a fluid vision of truth, one that morphs into many forms, so that the viewer can have his own experience viewing the work, while I have my own experience creating it."

For all your heating and cooling needs, please click here ...

"It seems to me interesting to understand what it is capable of sustaining in terms of human disturbances," writes one of the bird watchers on the raptor-conservation e-mail list on Yahoo. 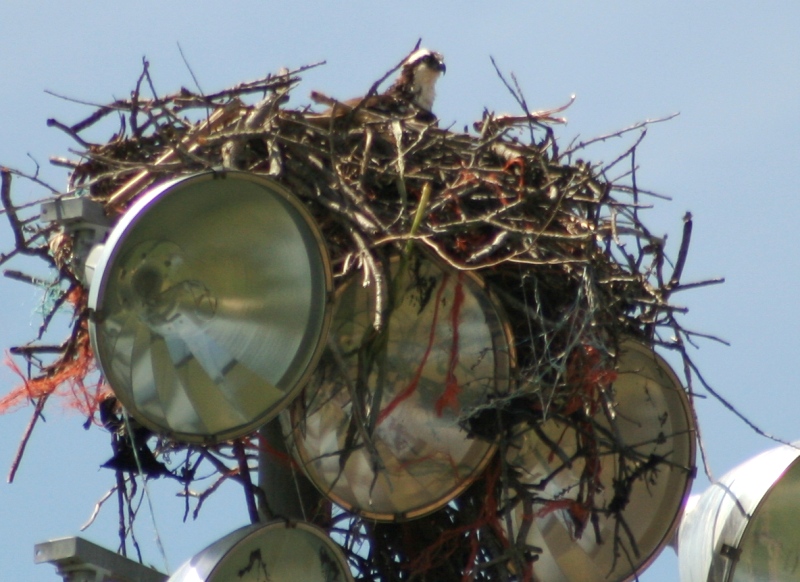 This is the platform nest on Freeman Highway near the Lewes ferry terminal at the railroad tracks. 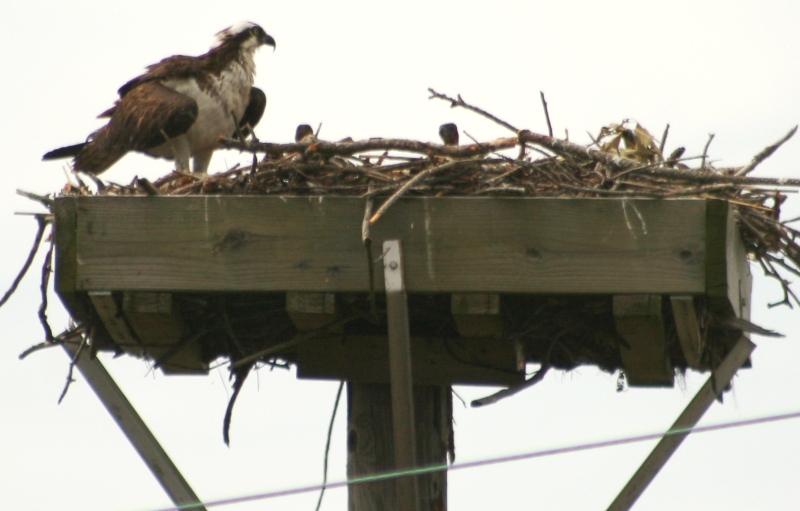 Two chicks are nesting beside the adult. Here is a closer look at the adult. 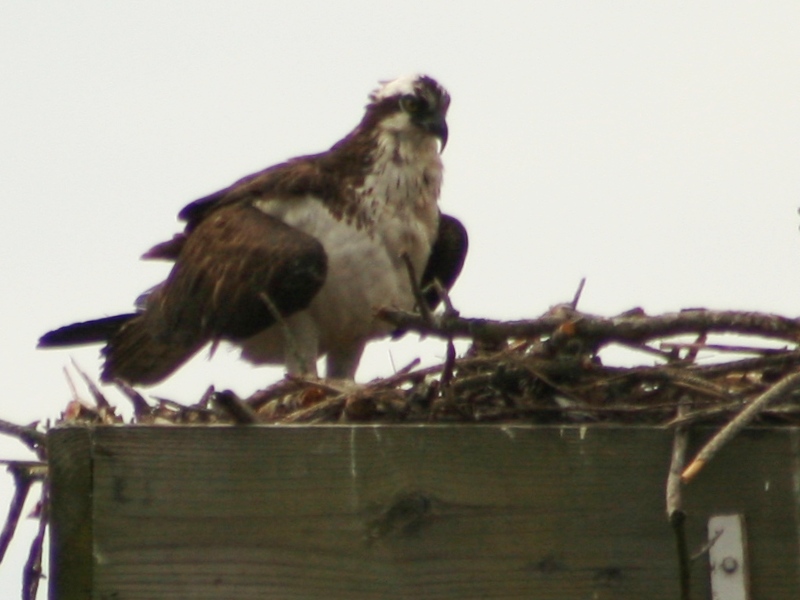 TODDLER CHOKING INCIDENT ON CAPE MAY-LEWES FERRY--- This past week there was much discussion regarding the rescue of the toddler who nearly choked to death while aboard the Cape May-Lewes Ferry. Much discussion in the comments section of this WGMD.com article focused on who actually saved the boy.

CORRECTION FOR LAST WEEK'S SNYDER'S CANDY CAPTION--- The quotes were from Jeff Balk, owner of Snyder's Candy and VisitRehoboth.com, and not WGMD's Jake Smith who conducted the live interview.

A NOTE FROM RBPD LT. WILLIAM SULLIVAN REGARDING COUPLE ARRESTED FOR RECENT CRIMES--- As mentioned last week, Gina Sautter, arrested by the state police for theft at the Epworth Church, was also charged by Rehoboth Beach PD for several vehicle break-ins and thefts, along with a man, Dustin Manahan. For photos/details see this WGMD.com article.

One rumor circulating this past week suggested the couple committed 60 robberies. "First let me clear the air of confusion about what actually took place from the end of May until the beginning of June," Lt. William Sullivan stated. "I'm not sure where the number 60 came from, but I assume it was given as a ballpark figure of the number of charges we charged two individuals [Sautter and Manahan] for breaking into cars and committing other thefts in town."

Lt. Sullivan also expressed concern that terms "robbed" and "robbery" are being misused. In these cases, he said the terms should be "thefts" from vehicles and "burglary" to a residence. The only time the term "robbery" is correctly used is when someone takes something from someone by force or threat of force (i.e. strong-arm, armed, etc.).

He added that additional charges are still pending against the duo. This past week he said RBPD has arrested them for all of the "thefts" from vehicles that occurred from the end of May to the first week of June, which turns out to be eight and not 60 incidents. They were also arrested for stealing two unattended purses, one outside of the Pond, and the other from the Laundromat.

Perhaps most importantly, Lt. Sullivan notes that during the recent thefts and the burglary, the vehicles and residence were left unsecured.

Another crash on Route 404 with injuries

OCBP captain discusses 2 ocean deaths in 2 weeks: "I personally feel the impact of every loss."

This report is being e-mailed to 1,826 recipients. Thanks for your support!