Despite the threat of more rain, the much anticipated Dewey Summer Solstice celebrations and parade featuring the Budweiser Clydesdales drew thousands to the popular resort town this past Thursday. 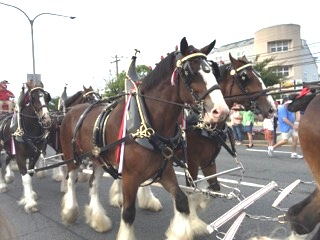 "It was a terrific event with fun for all," says Mayor Diane Hanson. "Thanks go to the Business Partnership for all of their efforts. I know it was a lot of work to organize in such a short time but everything seemed to go off without a hitch. This is also a testament to how well the town and businesses are working together," she pointed out. 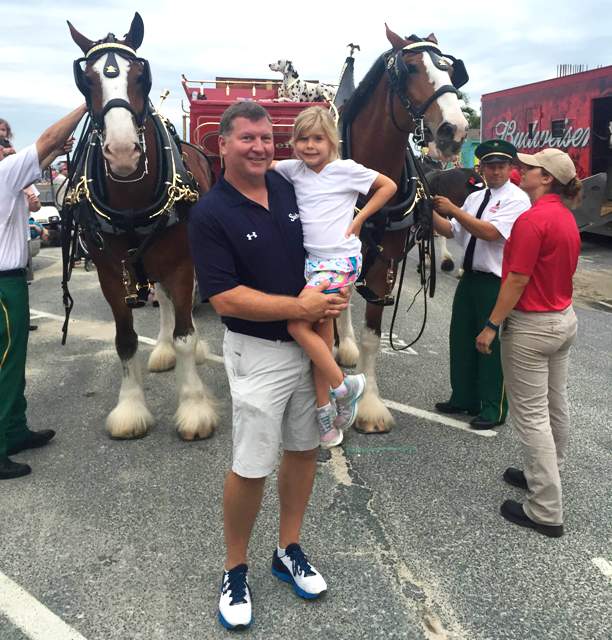 "This event truly showcased what Dewey Beach is all about," Montgomery said. "It brought every one of the sectors in Dewey together, from the businesses hosting it along with our friends at Anhueser-Busch, to the property owners coming out to enjoy, and all of the children as Dewey is truly building a reputation as a very kid-friendly beach town that offers so much for kids of all ages!"

Montgomery added that this event "hit a grand slam for our town, where everyone that lives here or was visiting here enjoyed everything about the evening, all while the businesses flourished serving all those in attendance." The horses, he pointed out, are extremely unique and beautiful. "We thank our friends at Budweiser for sharing their beauty with all here in Dewey Beach," he added.

The parade made its way to the Rudder circle where the horses posed for spectators and even more photos with adoring fans. 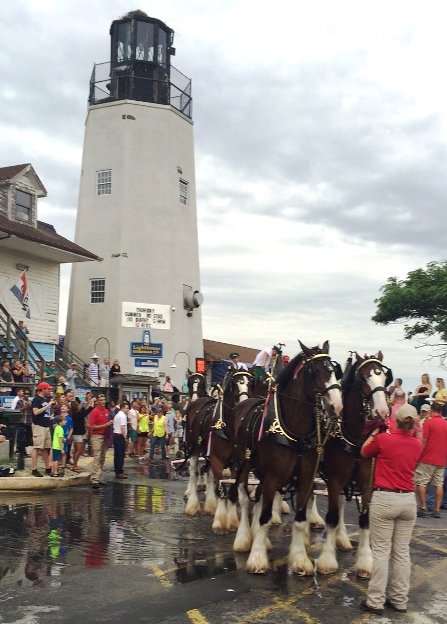 The Budweiser Dalmatians accompanied the horses. 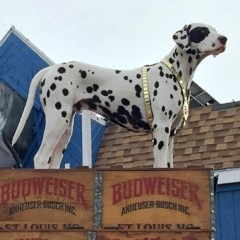 Also riding in the parade was 92-year-old Thomas Creekmore, recipient of the French Medal of Honor, who paid homage to Adm. George Dewey, the town's namesake. Here he is with Dewey Beach Commissioner Dale Cooke. 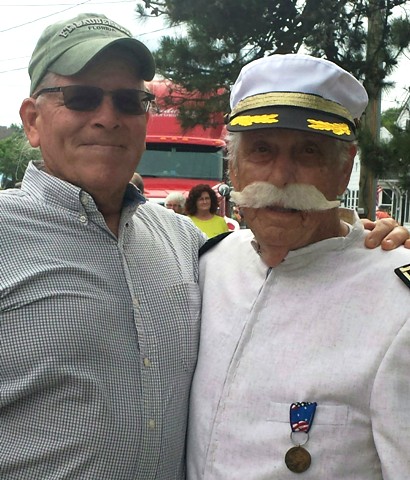 The question everybody has been asking, will the Clydesdales return in the future? "A member of the Budweiser team told me that everyone they worked with in the town was so pleasant to work with that they would love to come back," Mayor Hanson added. "Here's hoping we can do it again."

Want more Dewey Beach news and event info? Mayor Hanson and Comm. Cooke each have their own e-mail newsletters. Just click on their names and send them an e-mail to be added to their distribution lists. The Dewey Business Partnership has an e-mail list as well. See the website for info.

For the second time this season, ocean waters at Rehoboth Beach have received a swimming advisory. The advisory sign was affixed to lifeguard stand #10 at Rehoboth Avenue just before noon on Thursday, the morning following the elevated test. Lifeguards initially kept people out of the water, but later simply warned them of the advisory and allowed them to enter at their own risk. 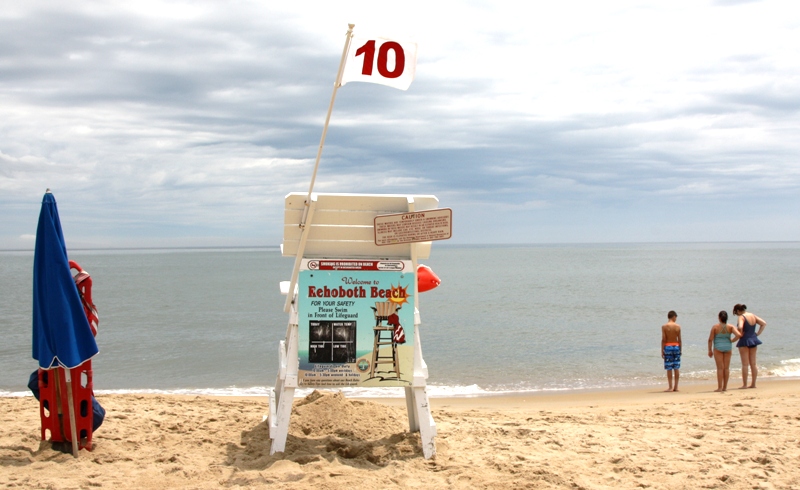 During the summer, the state regularly tests Rehoboth Beach ocean water quality at Deauville, Virginia Avenue, Rehoboth Avenue and Queen Street. The previous advisory was on June 7 when the state warned of elevated bacteria levels at the Deauville test site.

In both cases, the water was retested and cleared by the state the following day. Officials blame the elevated tests on storm water runoff. This past Tuesday, the boardwalk DEOS weather station shows that Rehoboth had more than an inch of rain.

The Natural Resources Defense Council (NRDC) is the organization that had in years past awarded Rehoboth a "super star" beach status based on its excellent water test results. The last NRDC beach water report was completed in 2014. Documents on the NRDC web page, Testing the Waters 2014: A Guide to Water Quality at Vacation Beaches, have extensive analysis into water quality for each state.

According to Jon Devine, a senior attorney with the NRDC Water Program, the organization plans to "release something this summer that is different from the prior reports. We're looking at the data we've compiled over many years and performing a variety of analyses to summarize noteworthy trends in, and factors influencing, beach exceedances across a number of geographic scales."

Officials removed this sign from the Rehoboth Avenue lifeguard stand around 2 p.m. on Friday. 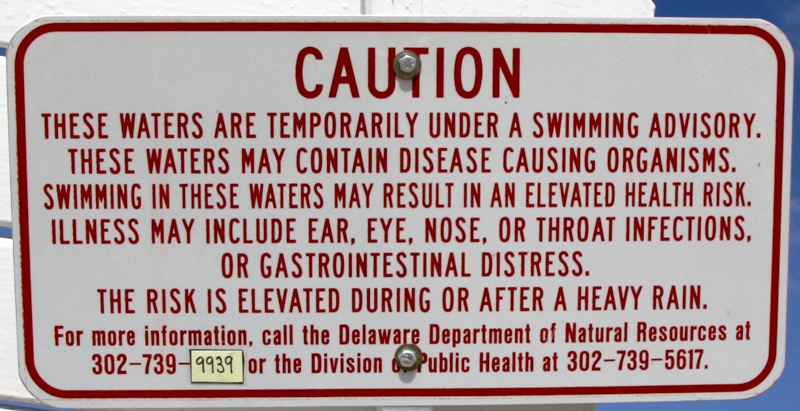 WEDDINGS ALLOWED ON BEACH
But what about trucks, trailers, sound systems and generators?

A Rehoboth Beach public works crew called police around 5:20 p.m. Sunday when they came across this truck and trailer on the beach near the Henlopen setting up for yet another wedding. Their concern was that the beach was too crowded to allow vehicles on the beach. Just as a police officer was arriving to check on the situation, the driver sped off.

While weddings are allowed on the beach in Rehoboth with a permit, some of the ceremonies have been coming increasingly more elaborate in recent years with trucks and trailers, deejays, sound systems and portable generators. Trucks on the beach are a frequent occurrence with some of them delivering chairs for weddings on a daily basis.

The city's wedding permit clearly states that "Any decorations, props, flowers and/or chairs must be hand-carried and removed directly following the ceremony – no driving is permitted on the beach." Furthermore, it also states that "Amplification of sound or use of alcoholic beverages is prohibited."

The drug epidemic in Sussex County is alarming, with almost daily news reports on the situation. In the Rehoboth area this past week, EMS crews and state troopers responded to at least two suspected drug overdoses that almost resulted in death.

The most recent incident was reported around 3 p.m. this past Saturday at the Forj Lofts complex at 37043 Rehoboth Avenue-Extended. This is on the service road along Coastal Highway adjacent to the self-storage facility outside Rehoboth. A man in his 20's was reported in cardiac arrest and the 9-1-1 dispatcher was giving CPR instructions. He was later reported as conscious and talking when taken to Beebe Hospital. 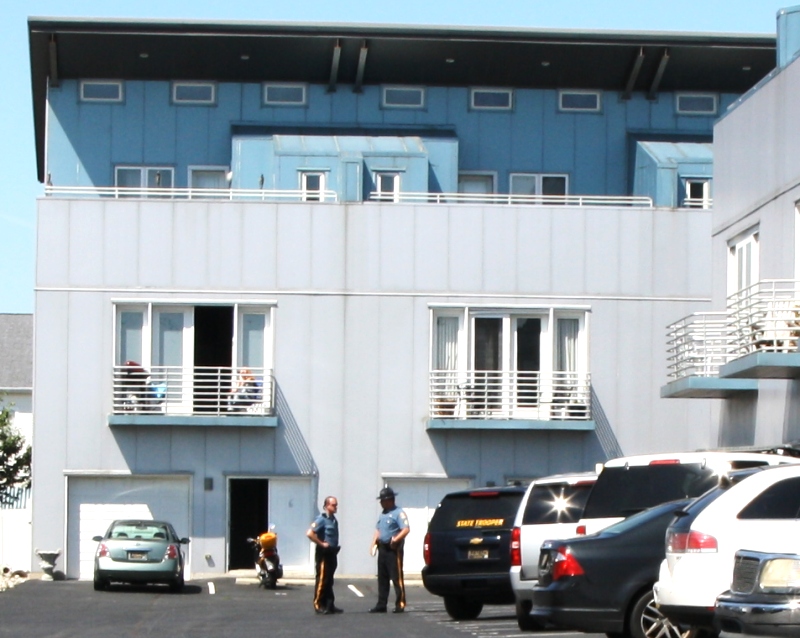 Around 3:15 p.m. last Monday, EMS crews responded to a residence in the 19100 block of Coastal Highway, near Atlantic Liquors, for a similar case where a 30-year-old man had been reported in cardiac arrest. But he too was alive when taken to Beebe Hospital.

There were no injuries reported when this BMW SUV ran up over this retaining wall at this home on Surf at Oak avenues in Rehoboth Beach. The accident happened around 3:40 p.m. Sunday. 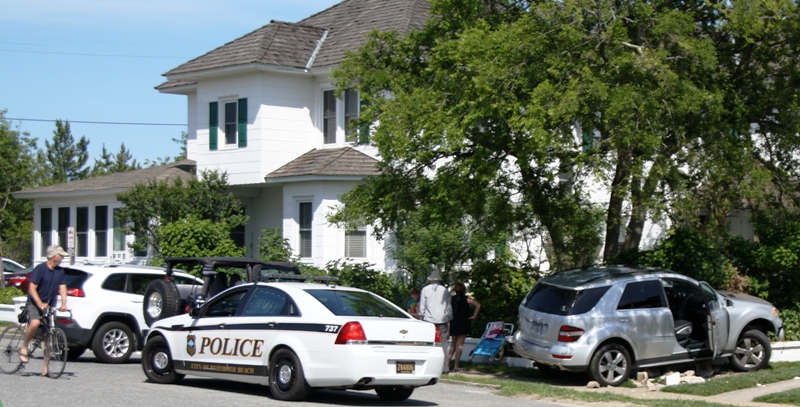 The SUV was leaking fluids and a tow truck was required for removal. No word yet on charges, if any.

UNIQUE WORKS BY WHITEHEAD ON EXHIBITION AT GALLERY 50

Gallery 50, under the guidance of Eric Davison, opened the season with another wonderful and unique exhibition. Pat Whitehead, an artist from Alexandria, Virginia, uses oils to paint scenes of people in museums and similar situations. She is a modest artist who does great work. Here she is on the right, with Davison and Karen Robbins. 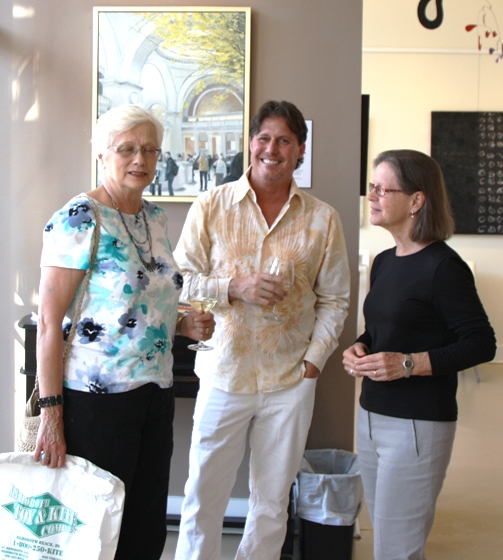 Whitehead visits many art museums, some of the best known in the world, and takes hundreds of pictures. When she returns to her studio, she puts those photos on the wall and studies them for use in her paintings. She paints in thin layers of oils which give her work a photo-like appearance.

She finds a sense of peace in her figurative museum art series which also provide a sense of multiple dimensions. "Right now in this world of turmoil, there are places still in all our cultures around the world that are places of just reflection," she points out. "I find it a lot of times in art museums, and no matter where I am... you go into an art museum and you go into another world. Everybody's respectful, they're introspective, they're quiet, they're happy, they're peaceful... I started realizing it was just such a different world," she notes.

The Eureka moment for her was when she was on a walk with her husband in England studying trees for an art series she was developing and that is when she realized there were figures through the trees that were interconnecting and it was that same sense of peace. Spending so much time in museums, she quickly made the connection and started to notice how people interact differently in museums, parks and other calm settings. This is what led to her figurative museum art series.

This is Whitehead's Urban Scene of Gustave Caillebotte's "Paris Street, Rainy Day" from the Art Institute of Chicago. 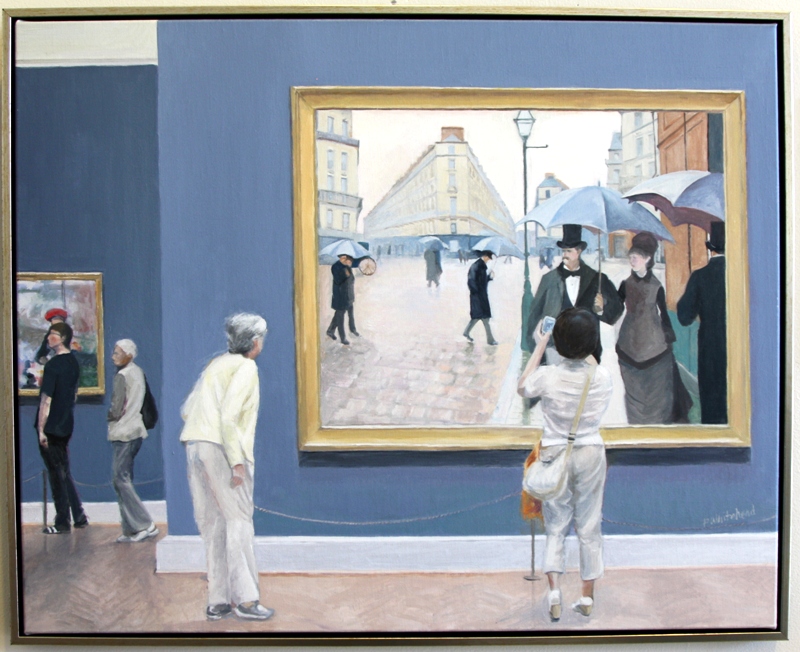 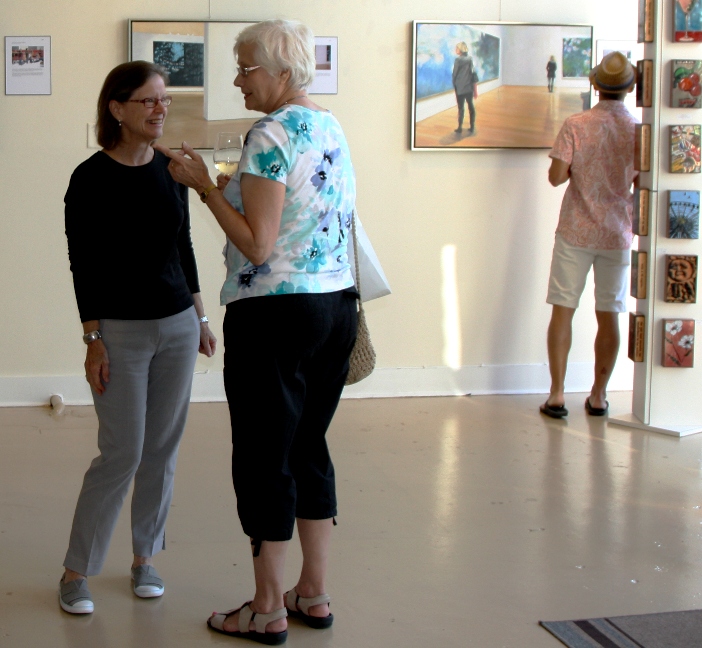 Kristen Kerr Leitch says her three friends from Calvert County, Christopher Floria, Shamar Gray and Levi Brickner, caught both an 8-foot and 6-foot shark around 72nd Street Saturday. They released both of them after snapping some photos. Here they are with the 6-footer that took them about two hours to reel in. 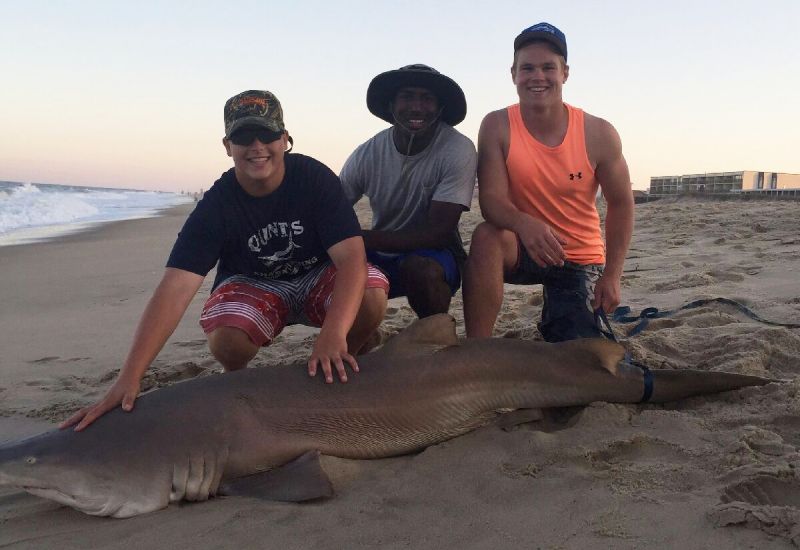 In other shark news, in Delaware, around 10:40 a.m. on Sunday, a dead 5-foot shark washed to shore in front of Island House in Sea Colony. 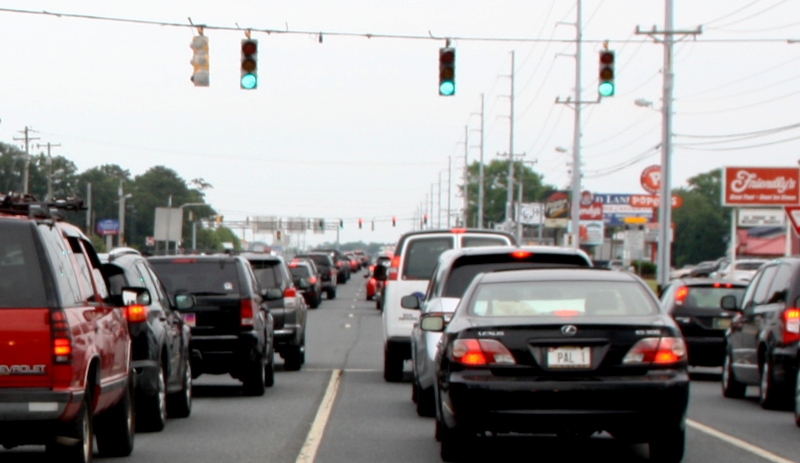 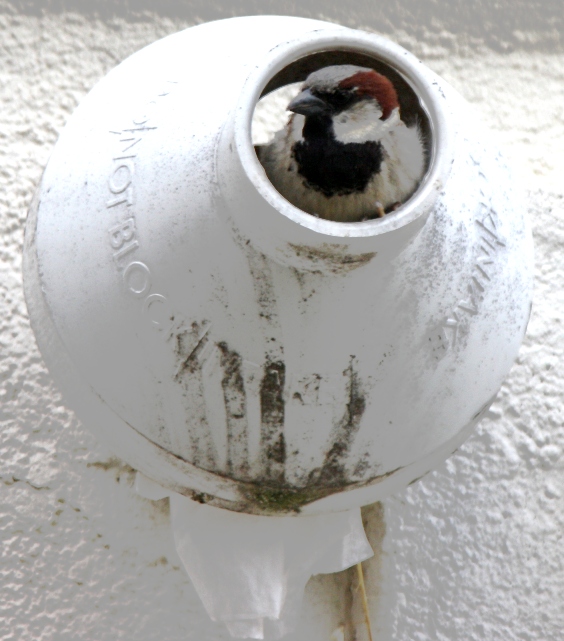 UPDATE/CORRECTION TO LAST WEEK'S PHOTO CAPTION OF THE PARKING DEPT. RIBBON CUTTING--- Missing from the caption because he was almost squeezed out of the photo was Commissioner Patrick Gossett. Sorry about that commissioner.

MOTORCYCLIST FLEES POLICE, CITED FOR 9 VIOLATIONS--- A motorcyclist fled Rehoboth Beach police around 12:15 a.m. Tuesday. Police reported that he sped off at a "high rate of speed" going west on Rehoboth Avenue in the east-bound lanes. Police did not chase him. However, one officer followed his trail and found his abandoned motorcycle at the end of Sewer Plant Road. Police caught up with him minutes later. The motorcyclist actually possessed a valid license and was issued citations for nine violations, "tagged and released."

WOMAN FOUND DEAD IN MOTEL OUTSIDE LEWES--- State troopers and EMS personnel from Lewes responded Saturday to the Driftwood Motel just before 1 p.m. A woman was found dead at the motel which is at 18282 Coastal Highway outside Lewes, but police say it does not appear to be suspicious.

4 BEACH UMBRELLA STRIKES WITH EMS RESPONSE IN 1 HOUR--- During a one-hour period on Wednesday, Ocean City EMS crews responded to four calls on the beach for persons struck and injured by flying umbrellas. The first was around 11:30 a.m. at the Rainbow Condo, followed by another at 122nd Street eight minutes later, and a third on 18th Street at 11:50 a.m. and the fourth at 12:15 p.m. near 2nd Street. None sounded critical.

BUDDHA STATUE MISSING FROM KENT STREET--- Rehoboth Beach police took a report Saturday morning that a Buddha statue disappeared from Kent Street and other vandalism had been committed as well. It happened sometime overnight. Please call police if you find the statue.

Is Speaker Pete pulling a fast one?

Bethany Beach ultimately still at the mercy of tide and storm

Ocean Pines resident bilked out of $40,000 in Internet scam

This report is being e-mailed to 2,027 recipients. Thanks for your support!