Having trouble viewing this report or its photos? Click here: http://henney.com/weekend06/ or e-mail alanhenney@aim.com

MAN WITH GUN ON BEACH; WHAT TO DO?

Lifeguards become involved enforcing all sorts of beach regulations, typically dealing with nuisances such as dogs on the beach, stunt kites, alcohol and now even smoking at some beaches.

But what to do when a man walks along the beach carrying what appears to be a semi-automatic handgun.

Rehoboth Beach police received the report around 2 p.m. Friday from beach patrol Capt. Kent Buckson. He "called the police department and advised that a man was walking on the beach with a gun that was holstered causing alarm to some beach goers," says Chief Keith Banks.

The man and accompanying blonde, both from Delaware, were walking north along the beach. 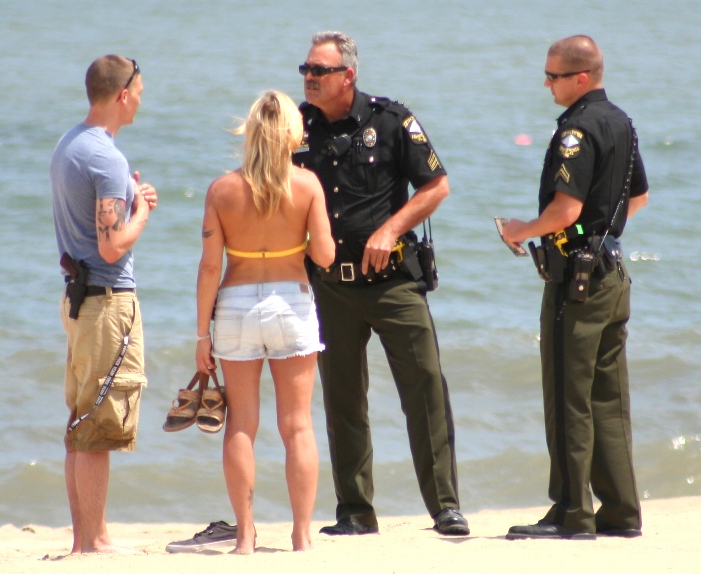 Police and lifeguards kept tabs on the couple as they walked north along the surf. Police confronted the duo as they approached an isolated area near the city limits.

Sgt. Victor Letonoff had a lengthy discussion with the couple. But after about 15 minutes, the police departed and the couple headed back toward downtown Rehoboth along the beach.

"The gentleman was expressing his right to open carry. No laws were broken and they went on their way," says Chief Banks.

People in Delaware are allowed to carry guns, but they cannot be concealed. This comes as a surprise to many beach goers. Read more on the Delaware Open Carry website.

This was not the first time the Rehoboth Avenue drawbridge got stuck and was unable to completely close. It happened again just before 3 p.m. Thursday. Traffic into and out of Rehoboth Beach backed up for blocks as police attempted to divert motorists around the bridge. 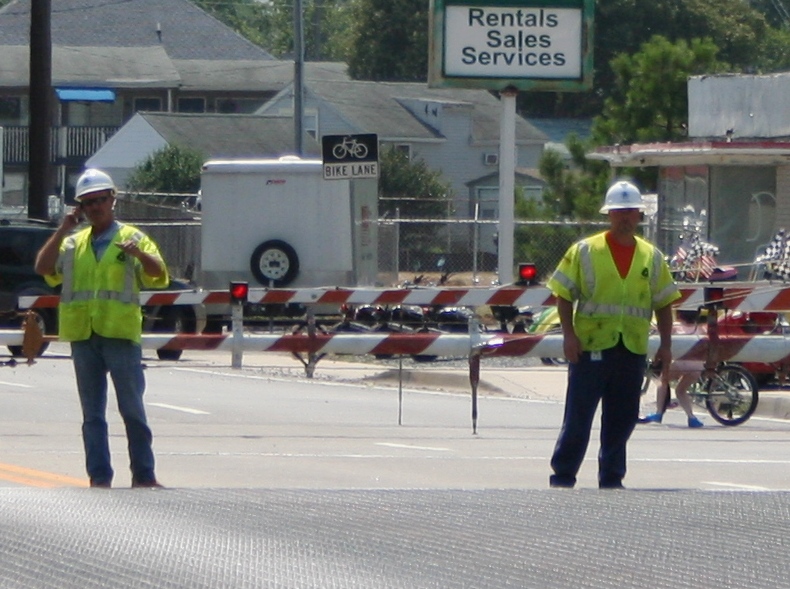 Additional DelDOT personnel arrived and attempted to assist the bridge tender. They raised and lowered the bridge several times in hopes of getting it to close completely. When that did not work, they slowly drove a DelDOT truck onto the bridge until the span fell into place.

On Thursday "the Rehoboth Drawbridge was temporarily closed for mechanical repairs," states Louise A. Holt, DelDOT spokesperson. "Shortly after the repairs, the bridge was re-open to traffic." The bridge was closed for more than 30 minutes.

Pastor Robert Dekker of the New Covenant Presbyterian Church in Lewes said he had requested permission from the City of Rehoboth Beach to hold services at 8 a.m. on selected mornings during the summer at either the Rehoboth Beach Bandstand or on the beach at Rehoboth Avenue.

He says the request had been turned down because of separation issues between church and state. The city could not allow this.

A flier has been distributed this past week advertising a worship service "in defiance of tyranny" on the beach at Rehoboth Avenue at 9:30 a.m. on July 4th.

Although mentioned by name, Pastor Dekker said he did not create the flier and was uncomfortable with its language. 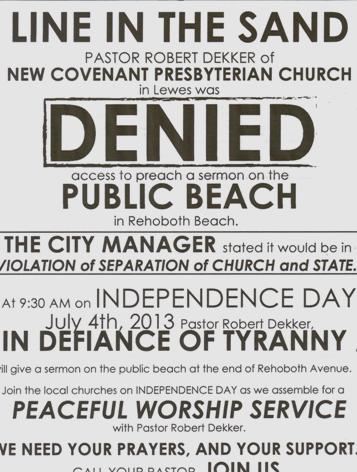 If he attends, Pastor Dekker said, he will not attend as a church leader but as a member of the general public. He added that he originally sought early outdoor services on the beach or at the bandstand to reach out to those who would have trouble reaching church because of traffic.

He notes that another church conducts services in Bethany Beach. In addition, open-air evangelists have preached from the Rehoboth boardwalk in years past along with the Childrens "CSSM" Ministries on the beach.

The ACLU provides these guidelines which cover rights of protesters and persons involved in similar public assemblies.

As of Friday, police have not yet released any new details concerning the shooting of a 38-year-old woman early Tuesday at the Love Creek mobile home community near Lewes.

Police have said that "Detectives have determined through preliminary interviews and investigation that this was not a random act, and the victims may have been targeted in the home invasion." 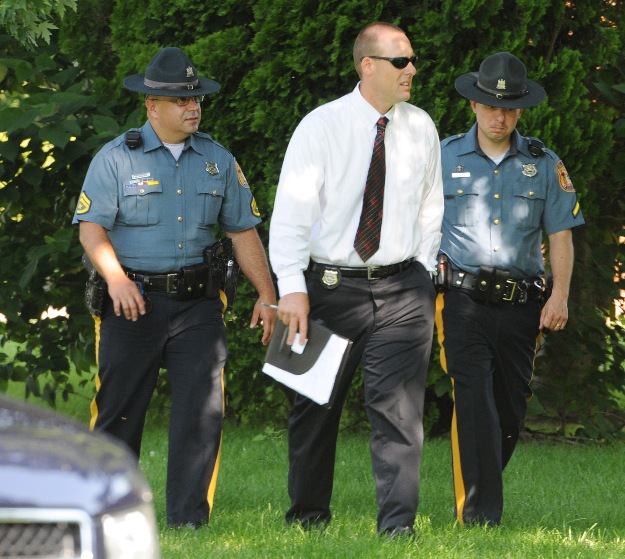 According to the state police news release: "The incident occurred at approximately 6:35 a.m. as two male suspects, one armed with a handgun, forced their way into a residence located in the 33000 block of Foxglove Run west of Lewes. Once inside, the suspects entered a bedroom where a 38-year-old female and her 12-year-old daughter were sleeping. After the two were alerted to the intruders, one of the suspects fired a single round at the 38-year-old female, striking her in the head. The suspects then fled the residence in an unknown direction without taking any items or cash. The 12-year-old was then able to call 9-1-1..." The 38-year-old was taken by an ambulance to the hospital where she was treated for the gunshot wound.

Color, shape, movement and feeling are what Burk says inspires her expressionist works. That is her on the right with her series of mixed media on paper, Supposition I to IV. 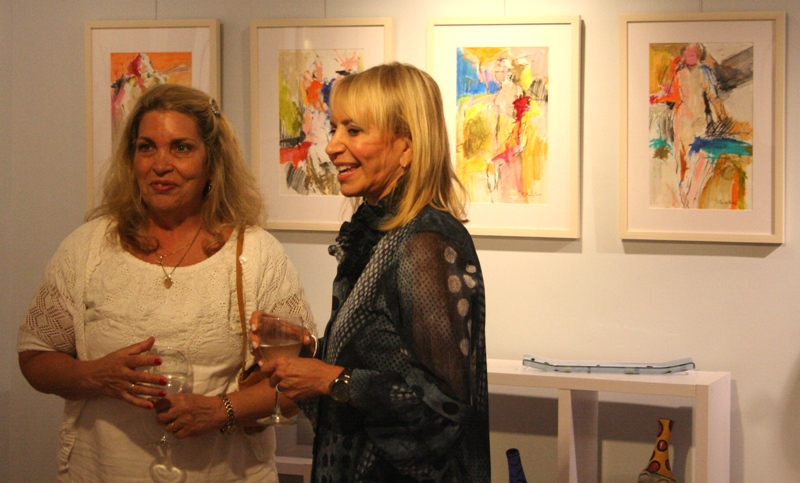 Her work conveys a sense of feeling and mood with her powerful use of color, dynamic forms and shapes.

She loved art as a child and says the passion continued with painting. She has done drawings, sculpture, print making, oil, water colors and mixed media. She enjoys the challenges as she continues to further her style. She works with paint and mixed-media on paper and canvas, to help establish the feeling and mood she wants. In the background is her Moodscape Revisited, mixed media on linen canvas. She has various series of works on display including landscapes, mood "moodscape," the male form "malescape," etc. 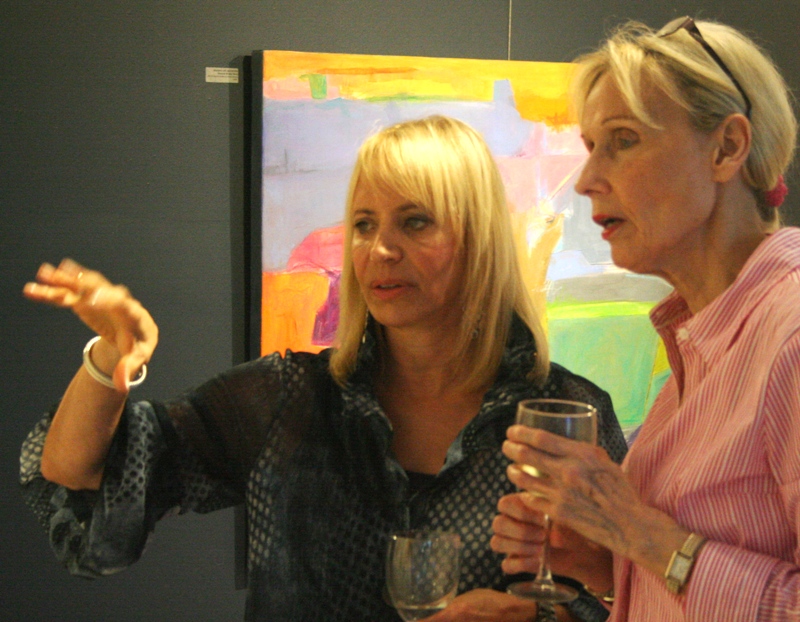 Eric Davison, director of the gallery, says he is keeping busy running the Morton Gallery as well as Gallery 50, which he has taken over during the winter. Gallery 50 continues to offer contemporary art and custom framing.

Burk's show continues at the Morton Gallery, at 47 Baltimore Avenue, through July 16.

CELEBRATING THE ART OF THE TANGO, IN DANCE AND PAINTING
by Dagmar Henney

Right next door to the Morton, the tango returns to the Anita Peghini-Räber's Gallery this season. She has new work on display and many of her latest paintings are inspired by the tango.

She once again continues to host tango dancing in her studio this year. The tango, a passionate dance that originated more than 100 years ago in the Rio de la Plata region, is the inspiration for not only dancing, but also other art forms.

They danced late into the night on Friday and Saturday. The dancers are from the Tango Lewes dance group and even Lori Coyle of Sangha Space from Philadelphia. They welcome visitors, so check their websites for coming events. 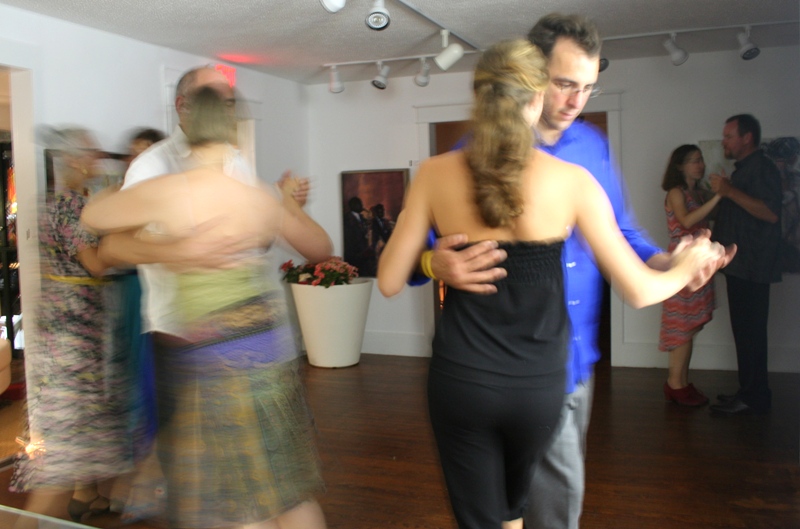 Anita has a vast collection of tango-inspired artworks, from small to large, and more exciting work. 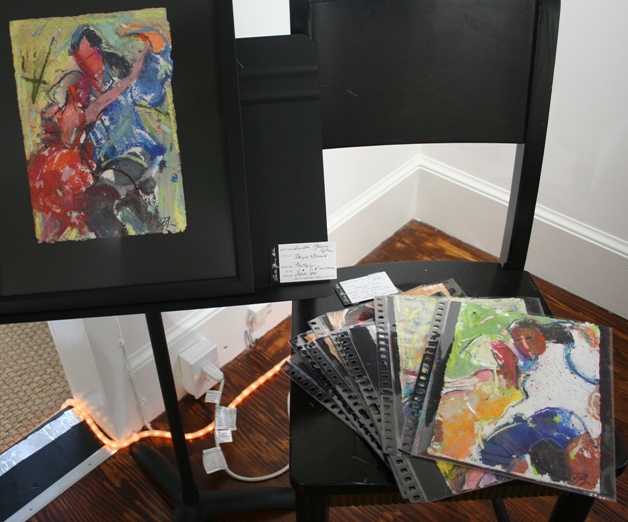 Anita Peghini-Räber danced with several lucky guys, including her own husband, Dr. Paolo Peghini. That's one of her tango paintings on the wall. 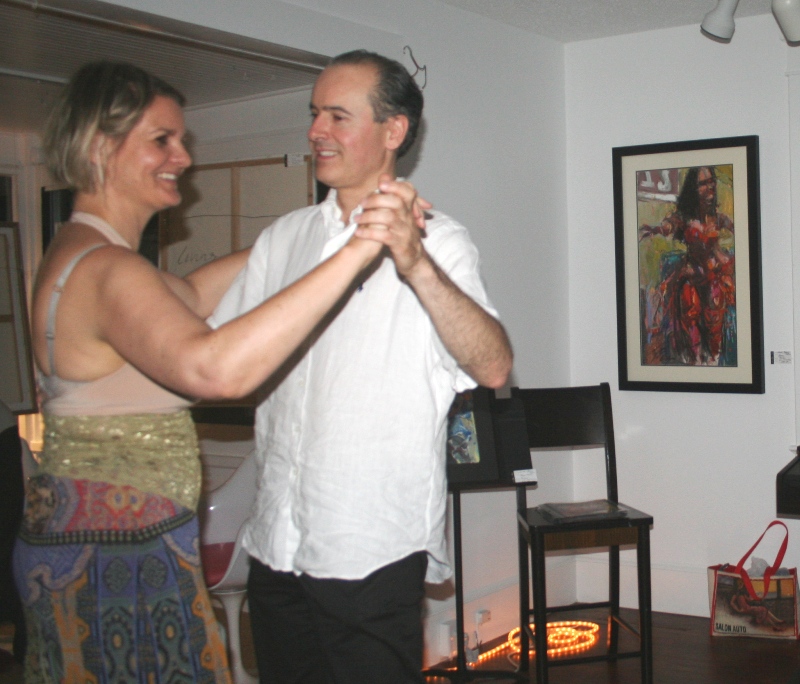 Take a look at Anita's gallery at 49 Baltimore Avenue in downtown Rehoboth Beach if you are interested in her beautiful art or the art of the tango.

According to one source, the Secret Service arrived in the Rehoboth area this past weekend, setting up possibly for another visit by the Bidens. Keep that camera handy!

Frank, a multiple New York Times best-selling author, is scheduled to be at Browseabout on Tuesday, July 2. Her latest novel, The Last Original Wife, was released on June 11. 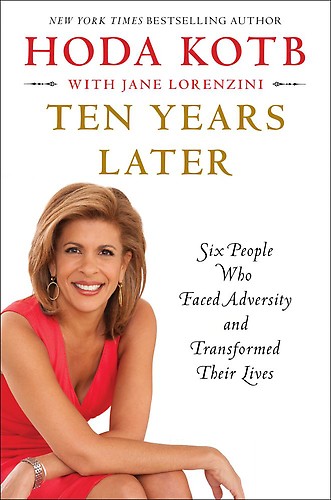 Hoda Kotb will be at Browseabout on Friday, July 5, signing copies of her latest book, Ten Years Later. 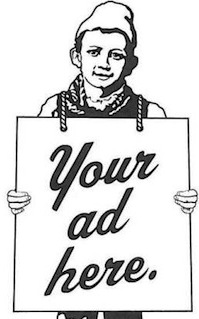 Parts of two trees fell in the third block of Oak Avenue during Sunday morning's storms. Police blocked part of the street until public works crews could remove the debris. 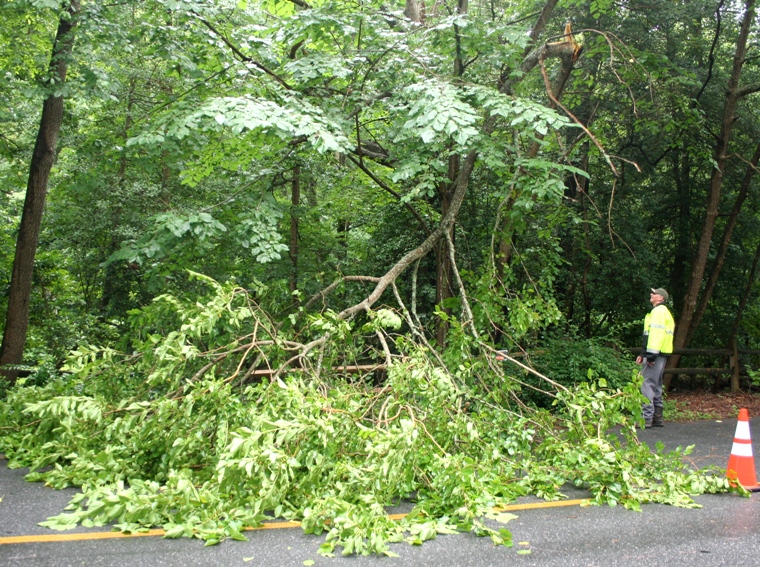 It's rained nearly 9 inches in June, according to the Rehoboth Beach DEOS weather station. More than a third of this year's rain has fallen during June.

AMISH MAN DISAPPEARS IN OCEAN--- A 34-year-old man from Jordanville, NY disappeared Saturday morning while swimming in the ocean on the south side of the Indian River Inlet. Wayne Kline, Delaware State Parks enforcement chief, has identified the missing man as Jeff King. Kline said King "went swimming with two other individuals at the Southeast Day Area Beach within Delaware Seashore State Park on Saturday at approximately 7:30. Witnesses reported that Mr. King began having difficulties swimming. One of the other individuals that was swimming with him tried to help him but was not able to keep a hold of him. The two other swimmers exited the water and waited/looked for Mr. King." They called for help around 7:53 a.m.

Bethany Beach firefighters were conducting water rescue training in the Indian River Inlet at the time of the call and were on scene with Jet-Skis in less than a minute, Kline said. Multiple agencies searched for King on the water, by air and on shore for more than two hours. The Coast Guard continued a methodical search until around 4 p.m. Lifeguards are on duty at this beach from 9 a.m. to 5 p.m., Memorial Day Weekend through Labor Day.

PLANE CRASHES OFF 133rd STREET IN OCEAN CITY--- Hundreds of beach goers saw the plane, possibly a Nanchang CJ-6A, based at the Ocean City Airport, drop and disappear into the ocean around 4 p.m. Sunday. Officials are still searching for the occupant(s). See the Maryland State Police or Coast Guard news releases for details.

MAN SERIOUSLY INJURED BY BOAT PROPELLER--- A man sustained a serious injury from a boat propeller while boating in the Assawoman Bay off 99th Street in Ocean City. He was reportedly being pulled by a boat on an inner tube when he was injured just before 7:30 p.m. Saturday. He was taken to Northside Park and flown to a trauma center.

How to avoid health hazards at the beach (same article in usnews.com and Huffington Post; mentions O.C.)