It is not often that property owners in the Pines neighborhood of Rehoboth Beach come across crime-scene tape with an active police investigation. That was the case this past Wednesday after police received a report that a woman was sexually assaulted in a rear apartment in the second block of Oak Avenue around 4 p.m.

Arriving officers caught the suspect loading this pickup truck. He was arrested without incident.

A driver struck a woman crossing Rehoboth Avenue around 7:30 p.m. last Monday near the Starbucks. Injuries sounded non-life threatening but the victim was swiftly taken by ambulance to Beebe Hospital. 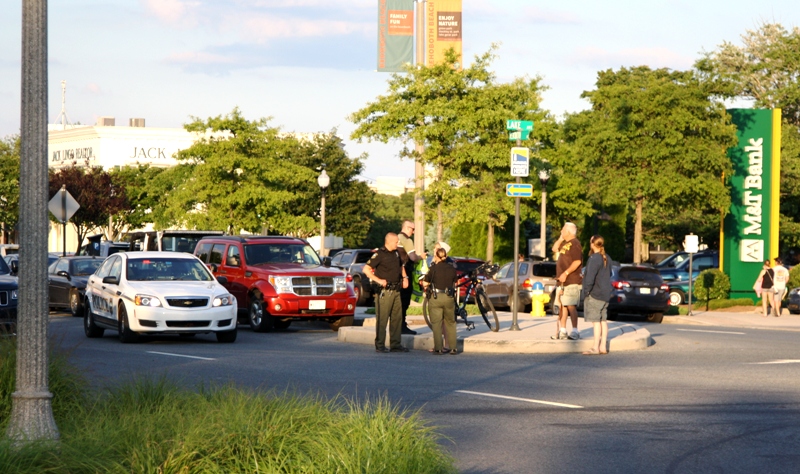 Police were looking for an older woman driving a tan mini-van, maybe a Chrysler Town & Country, with Virginia plates. One bystander took a photo with her camera as the van fled the scene. No word yet from police if the driver had been located. 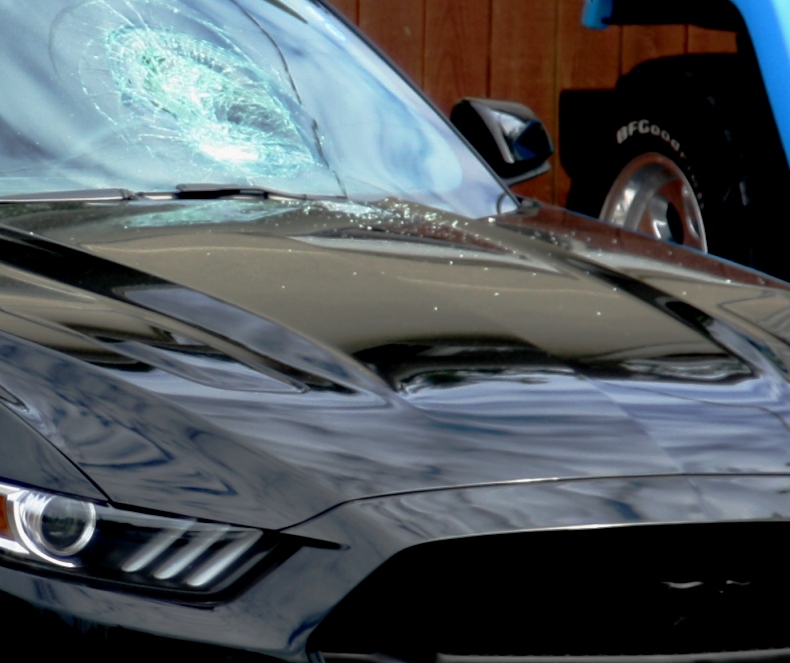 This Mercedes in the 1000 block of Scarborough Avenue-Extended had its rear window busted. 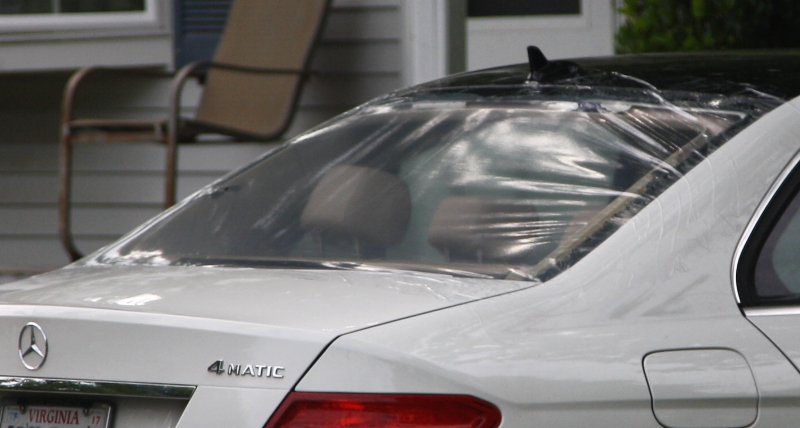 A third car damaged was an Audi in the 100 block of Country Club Dr.

Seems everything is a bit early this year including mulberries, cherries and campaign signs.

Traditionally candidates waited until after July 4 to start politicking, but not this year. Signs for all five candidates have been already appearing across town.

Comm. Kathy McGuiness had her "Coffee with Kathy," a "city commissioner constituent coffee," as she called it, "not a campaign event," this past Friday at Browseabout Books. The event was to include Police Chief Keith Banks and RBP Capt. Kent Buckson. But neither attended.

"As you know," Comm. McGuiness says, "At an event I made clear was not to be political but informative turned political by the city manager who less than 22 hours prior gave direct orders for Chief Banks and Capt. Buckson to not attend. My representative and speaker spoke on the record against this move," she said. "Comm. Paul Kuhns, locals and Susan Gay attended," she added.

Regardless if the Browseabout event were an informative event or a political event, Comm. McGuiness still was able to bring out the "star power" with Rep. Peter C. Schwartzkopf, Speaker of the House, Senator Ernesto B. Lopez, and Comm. Paul Kuhns, mayoral candidate. "I was humbled to have their support," she said. 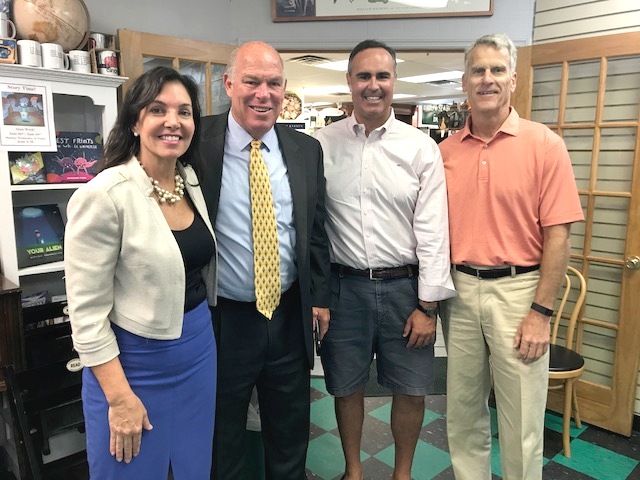 City Manager Sharon Lynn said Saturday night that she had no comment concerning the event.

Off to a quick start this weekend was commissioner candidate Lisa Schlosser, who invited voters to her home on Sunday before the Rehoboth Beach fireworks show, and on Friday to the beautiful home of Dr. Nancy Mondero and Mary Ann Bruno in Rehoboth's Pines. 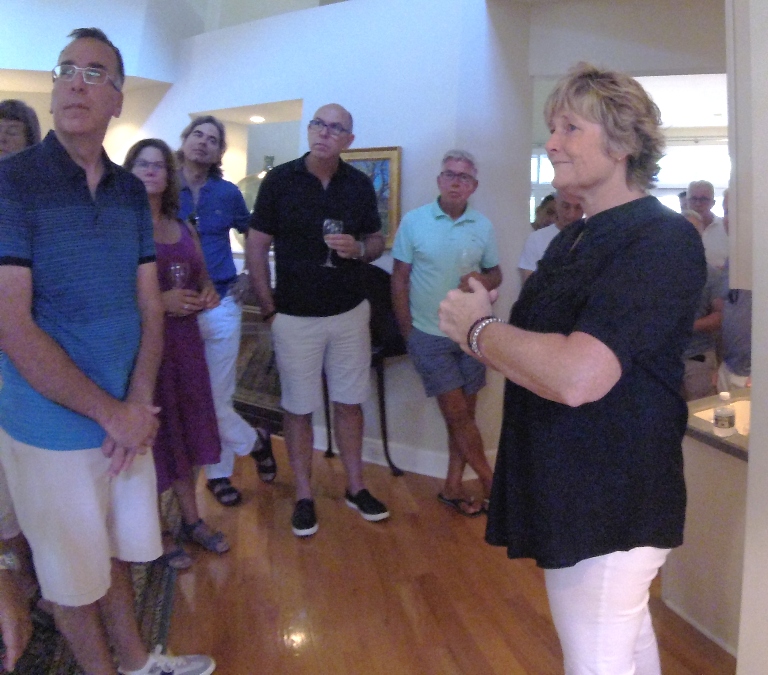 Schlosser told the crowd that she decided to run because "every day, I take a walk down Rehoboth Avenue and I was just getting increasingly more upset over watching that city hall project and then I started doing some research on the numbers..." She explained that project started as a $16 million budget item that may now end up costing as much as $22 million.

"So that is what got me thinking about running and I saw there were two candidates running for two positions and no competition, right? So you are just going to keep perpetuating the same lack of processes that caused the city hall project [to go over budget]... I have been a public servant for many years, I have a lot of expertise in financial management, in long-term planning, and I am going to be part of the solution," she added.

Susan Gay says her meet-and-greets have been scheduled in private homes around the city in July (info posted on her website). She plans to host a city-wide gathering for all registered voters planned on Saturday, July 22, at the new G Cask Kitchen Restaurant, 234 Rehoboth Avenue. "Otherwise, I've been busy morning till night talking to folks all over town and keeping up my long tradition of attending city meetings even in the summer. The July 4th holiday is a wonderful time for family togetherness. I hope everyone is enjoying theirs," she added.

No new news from either mayoral candidate to report this week.

Astute Biden watchers have pointed out that the Biden family is not trying to hide its new home in North Shores. In fact, they appear to be proudly displaying their new beach property. 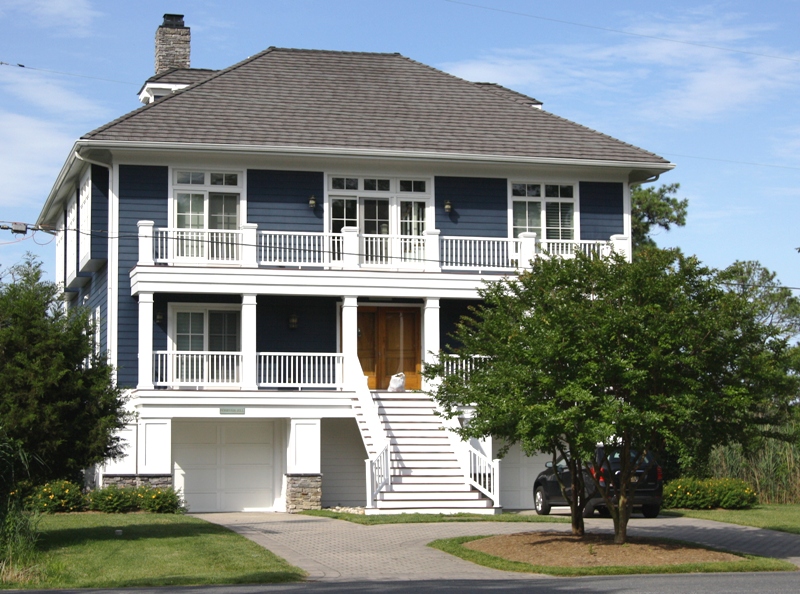 The words "FOREVER JILL" and "BEAU'S GIFT" appear over each of the garages, with "A PROMISE KEPT" shown over the main entrance.

Zillow estimates the value of the 6-bedroom/5.5-bath home at only $2 million but notes that it had sold for $3.2 million 10 years ago. The county's website still has not been updated with any recent transaction data.

The lifeguards and police kept busy this weekend enforcing the city's new tent and canopy ordinance. In some cases, beachgoers refused or were slow to comply with lifeguards and seasonal officers. And around 4 p.m. Sunday, officers later reclassified a tent warning as a disturbing the peace complaint after an incident escalated near the beach patrol HQ.

But incidents like those were infrequent. There were many warnings from lifeguards and police, most without incident.

"This picture came from my daughter today," writes one reader this past Saturday, who says she is "so disappointed with the town council. They really missed the mark with their sweeping ban. This was a young family with an infant being protected by this small pop-up beach tent," she said. The officer told three groups in the immediate area to remove their non-compliant sun coverage, she added. Two were the same baby tent and the third was a canopy. The family in the picture stayed on the beach and the infant was left sitting in the sun after that. 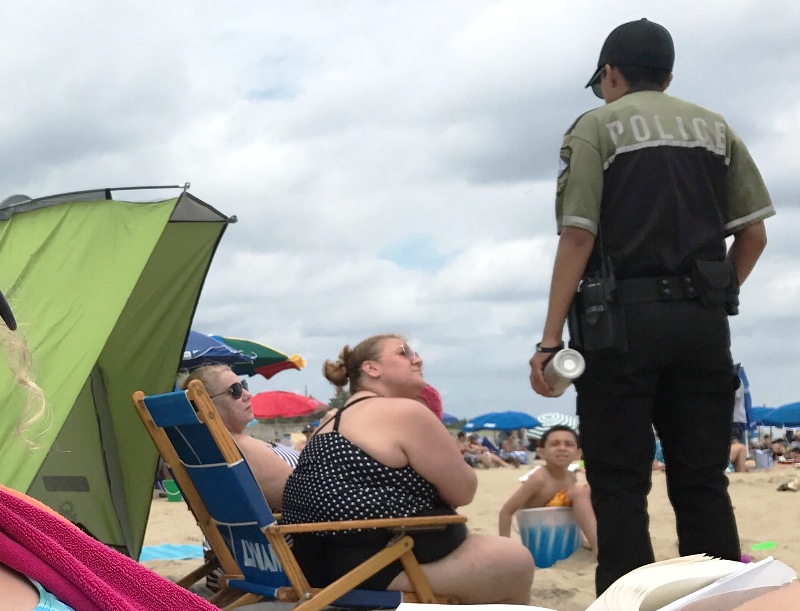 The city's new ordinance does allow for baby tents up to 36" high x 36" wide x 36" deep, used to shade infants and small children.

Ahhh, but beachgoers are adapting to the new ordinance using umbrellas that feature skirts, such as the Sport Brella PLUS and Super Brella with a central pole like a normal umbrella. They potentially allow for a semi-enclosed height greater than 36 inches too! 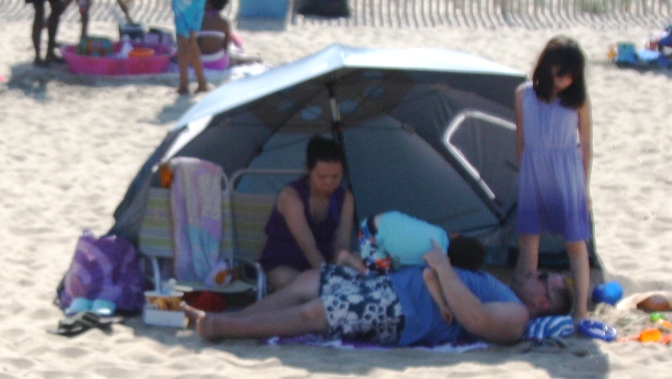 Both offer an 8-foot canopy, the maximum allowed by the city's ordinance.

THIS IS WHY PEOPLE HATE COASTAL HIGHWAY

"I took the photos attached yesterday [Wednesday] when traveling southbound on Rt. 1 as I merged into the left lane on the canal bridge," writes one frustrated motorist who asked not to be identified. "I signaled that I was merging left, and it appeared to me that the driver of this Range Rover provided space for my merge. I turned to give a thank you wave and this was her response (she flipped the bird at me). As I was stopped in the turning lane waiting for a green light at Bay Vista, this car passed me and everyone in the car yelled a profanity..."

"My photos are meant to not only shame these young adults," she adds, "but to remind people that we all just need to relax and enjoy the beach."

If anybody knows this couple, we would like to hear what they have to say for themselves.

U.S. NAVY HELOS; WHAT ARE THEY DOING?

A spokesman for the U.S. Navy was tightlipped last Thursday when asked about the Sikorsky MH-53E "Sea Dragon" helicopters which are seen often flying along the beach. They can be heard approaching from miles away.

The helicopters are part of the U.S. Navy Helicopter Mine Countermeasures Squadron 15 (HM-15) which has a few clues to its mission on this website. But why they fly along the beach so often, the spokesman would not speculate.

Sean Kelley opened Rehoboth Beach's latest art gallery this past Friday and it is a thoughtful fit with the other shops in Penny Lane Mall. Kelley is selling photographs and posters, framed and unframed, featuring mostly beachy scenes but also some other works. He was one of the few photographers at the Pentagon on Sept. 11, 2001 and he has a couple dramatic pieces on display. 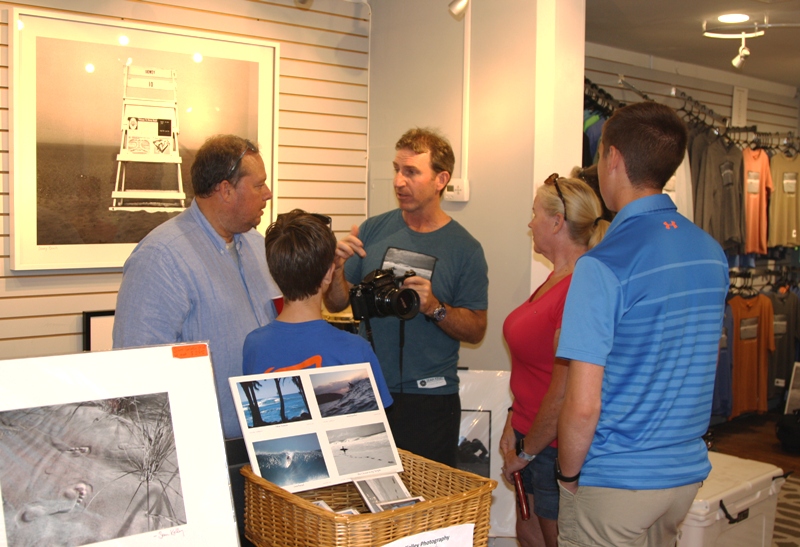 Kelley also sells wearable art, his unique clothing line featuring his photography which he wears in the above photo. He also sells original gift cards.

He says his shop is a throw-back store in that all the photos on the walls are from a film camera from 1972, a Pentax 6x7 that he holds in his hands, and all of the prints and framing are archival, meaning that they are rated to last 93 years! He points out that film is still visually superior to digital photography despite the technological advances. 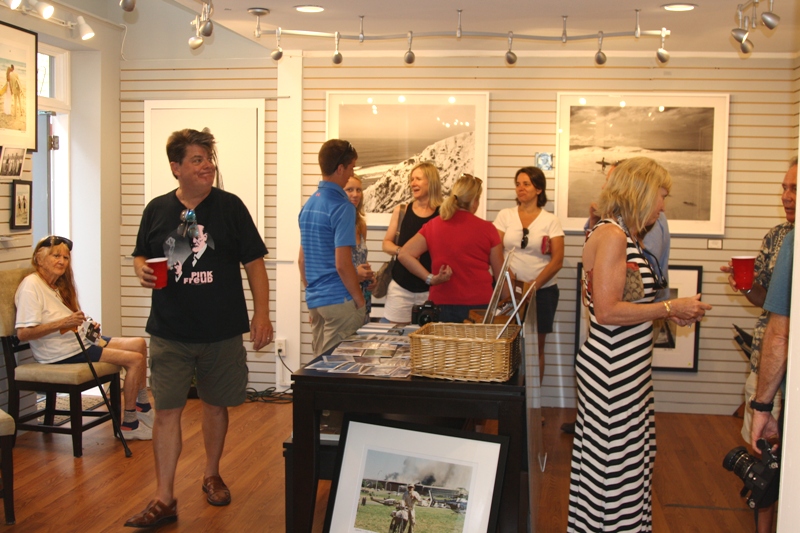 Kelley comes from Fairfax County, Virginia and plans to commute on weekends to have the store open Thursday through Sunday. 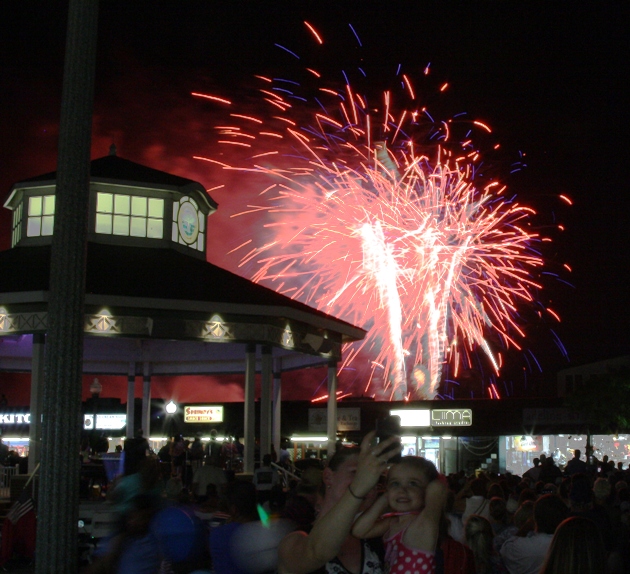 And this one is summer exemplified from the previous day... 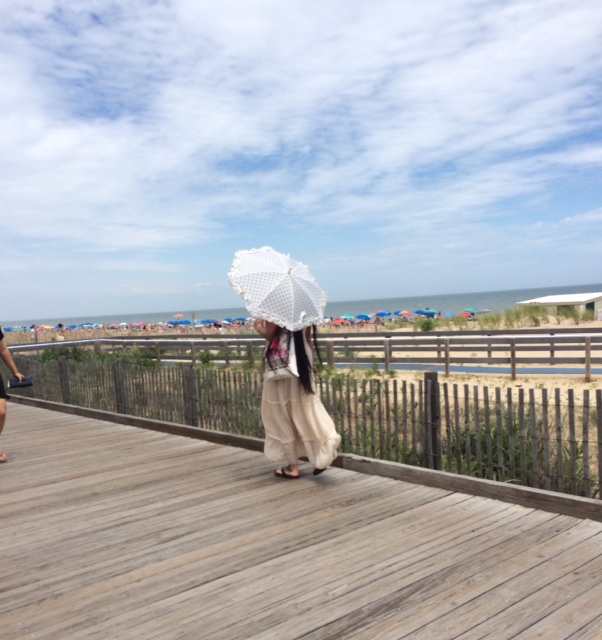 MOTORCYCLE CRASHES INTO DEER--- A 7 year old was injured when his motorcycle struck and killed a deer around 8:25 p.m. Tuesday on Camp Arrowhead Road near Jolyns Way in the Angola area. He was taken to Beebe Hospital with non-life-threatening injuries.

2ND SHALLOW-WATER DIVE INJURY REPORTED IN O.C. BAY--- For the second time this summer, a man was flown to a trauma center after taking a dive into shallow water in Ocean City. The most recent incident was around 2:10 p.m. this past Tuesday. He was pulled out by two other teens and flown to Baltimore. See this article in the Maryland Dispatch, Family hoping for best as teen faces paralysis after shallow dive into O.C. bay and also this one, Good Samaritan boater recounts role in last week's O.C. diving incident.

VEHICLE BURSTS INTO FLAMES INSIDE O.C. HOTEL GARAGE--- Ocean City firefighters extinguished a vehicle fire in the parking garage of the Princess Bayside on 47th Street around 3 a.m. this past Wednesday. The vehicle was on fire on the top floor under the over-ramp to the north building. It took firefighters several minutes to get it under control and clear the smoke.

COASTAL HIGHWAY BUCKLES, SLOWS TRAFFIC--- The entire southbound side of Coastal Highway started to buckle around 10:25 p.m. Friday at Hudson Road, north of Red Mill Pond. State troopers and fire police were called to handle the traffic until DelDOT crews could patch the roadway.

2 MEN INJURED IN SURF NEAR BETHANY MINUTES APART--- Bethany Beach EMS crews responded to two, almost simultaneous, surf injuries around 2 p.m. Sunday, one in Fenwick Island State Park and the other in South Bethany. A 37-year-old man suffered paralysis below his chest after getting injured in the surf. He was flown by helicopter to Christiana Hospital. The other man, a 42-year-old, was boogie boarding when he struck his neck injuring his upper back.

MORE PARKING RAGE--- For the second Saturday in a row (at almost the same location where last week's assault over a parking space had taken place), Rehoboth Beach police responded for yet another fight over a parking space. This time, a woman and child got out of their vehicle and stood in a parking spot that they had already driven past in traffic. While they argued with an incoming motorist, another space opened a few spots closer to the ocean, they took that one, and everybody was happy!

Experts: Don't turn your back on the waves (analysis of surf-zone injuries)

Corner of Route 1 and Holland Glade Road outside Rehoboth sells for $13.5 million

The 10 Best candy shops in Delaware! (#1 is Snyder's Candy of Rehoboth Beach!)

The simple charms of a Dewey Beach cottage in the 1950s