Having trouble viewing this report or its photos? Click here: http://henney.com/weekend07/ or e-mail alanhenney@aim.com

Agree with him or not, Pastor Robert Dekker of the New Covenant Presbyterian Church in Lewes has enjoyed national attention in his quest for a public summer church service in Rehoboth Beach. 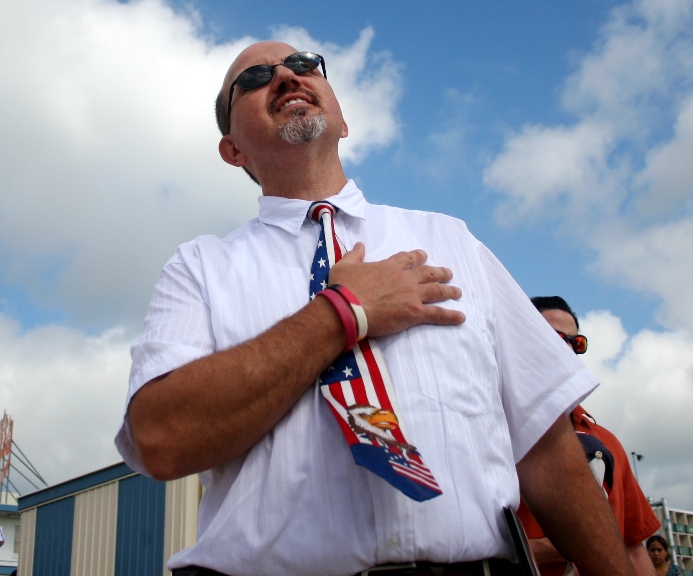 He tried unsuccessfully to get the city to allow his church to use the bandstand and even the beach for eight church services this summer. But after further negotiations, he was given written permission to hold a single "Freedom Rally" on July 4th, dubbed by supporters as the "line in the sand."

Dekker said last week if he attended it would be as a regular citizen. The following day he wrote this letter to Greg Ferrese, Rehoboth Beach city manager. Dekker was the rally's keynote speaker.

Hundreds of people attended the rally. The service was religious and patriotic, reminiscent of a Tea Party rally, complete with the "Don't tread on me" flags. The event started with the pledge of allegiance and the National Anthem. Even lifeguards reporting for morning roll call paused for a moment of respect. 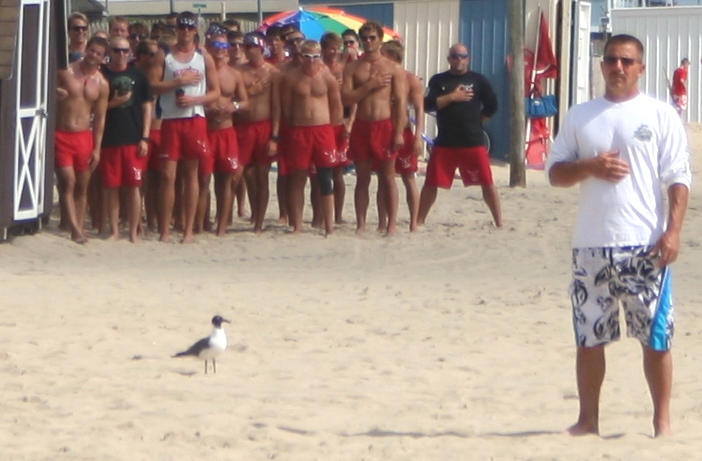 Ferrese confirmed that Dekker had asked in his initial request letter to the city for use of the bandstand. That request was denied for reasons of separation of church and state, Ferrese said.

"As far as the bandstand goes," states Christian Hudson, one of the Freedom Rally organizers, "it seems odd to me that the taxpayers of Rehoboth spent good money on building it and yet it goes largely unused more days out of a month than not. If lots of groups want to use it, just charge them all a fee and rent it out as a source of revenue to the city."

In further correspondence, Ferrese said Dekker later asked to use the beach for his eight services. The city turned that down as well.

Why did Dekker pick Rehoboth Beach? Dekker says he has always considered Rehoboth home. It is home to many of the church's congregation, and there is no facility on Lewes Beach like the Rehoboth Beach Bandstand. Furthermore, he said there are fewer people on Lewes Beach.

So where should Rehoboth Beach draw the "line in the sand?" What if every church wants to hold church service on the beach in Rehoboth Beach?

Here is what the legal director of the ACLU of Delaware had to say last week.

Ferrese also noted that the city has received at least one complaint that the event was allowed to use a public address system which is prohibited by city ordinance. The police did not take action. The city ordinance is referenced in this letter to Dekker.

"If we were allowed to use the bandstand, located just a few yards from where we had the event," Hudson said, "the bandstand has an integral PA system already built in. That would have saved us thousands of dollars and countless volunteer man hours and the city would have made more money that way as well."

Hudson said that "volunteers cleaned up not just our area but also picked up trash from other areas to keep the beach side clean. Many also put quarters in the parking meters of complete strangers. We left the place better than we found it, and the general public that surrounded our 1,500 attendees was very supportive of the event."

Memorial Day Weekend brought the scooter rally; Independence Day had the Freedom Rally... what's in store for Labor Day? When asked about future plans for public services in Rehoboth Beach, Dekker was vague, and said they were taking it one step at a time. "I am ready to preach," he added. "I will be ready to go."

A 1-year-old girl was injured after falling from a 2nd-floor interior balcony. The fall was reported around 12:30 p.m. Friday on Snug Harbor Court. This is at the end of Cedar Road on the canal in North Shores.

While EMS crews were responding, traffic was grid-locked on Rehoboth Avenue because the drawbridge became stuck. The responding paramedics were told to take State Road to enter town.

Robbie Murray, Sussex County EMS operations division manager, says the child was flown by the state police helicopter to the Alfred I. duPont Hospital for Children from the Rehoboth Elementary School. Shown below is the helicopter flying over the closed bridge. 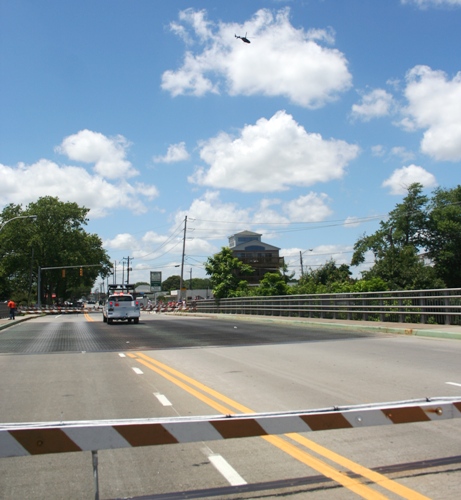 The bridge was closed, reopened briefly, then closed again as DelDOT personnel drove a truck across the bridge in another attempt to force it closed. Traffic started flowing normally around 2 p.m. This was the second time in eight days the Rehoboth Avenue drawbridge became stuck and was unable to completely close.

"The bridge interlocking system is malfunctioning," says Louise Holt, DelDOT spokesperson. "Motorists can now go across the bridge. Our maintenance forces will make further repairs to the bridge. The bridge is unavailable to boating traffic through Monday [tentative date]."

When they returned from the show and headed for the bus stop, they faced a huge line at city hall. 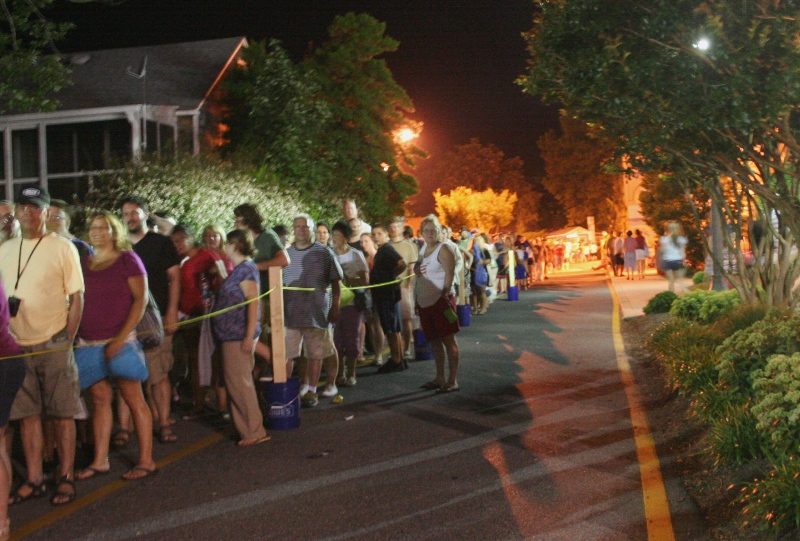 The line moved steadily, but at one point, it stretched along side city hall, behind and into the rear of the firehouse. 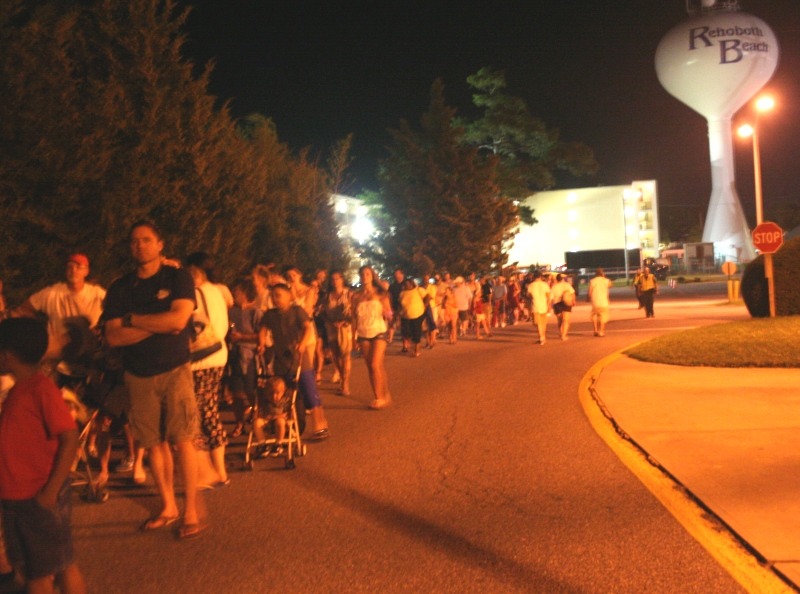 Some visitors decided not to wait for a bus and simply walked all the way on Rehoboth Avenue and crossed Coastal Highway. 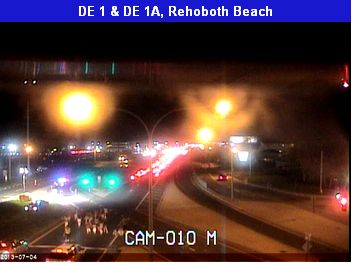 "All is well on Rehoboth Beach, Delaware until we see some people in a float," writes Liz Marie on her Youtube page. "They look like they are in distress. Suddenly the lifeguards jump up and start swimming out to help them get to shore. This happened in front of Surf Avenue near the Henlopen Hotel." 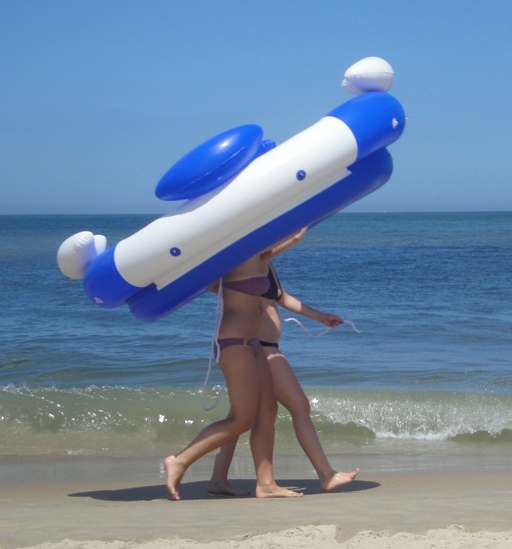 She said it took place Friday afternoon and "One girl looked like she jumped in to try and move the raft back to shore. Lifeguards went to the rescue because they looked like they were in distress" far from shore.

It has been a week from jellyfish hell for swimmers in Rehoboth Beach. Lifeguards have set up jellyfish sting stations where beach goers can find a vinegar-water mixture to help treat the sting.

Oddly, beach patrols in Bethany and Ocean City have so far reported almost no jellyfish problems. 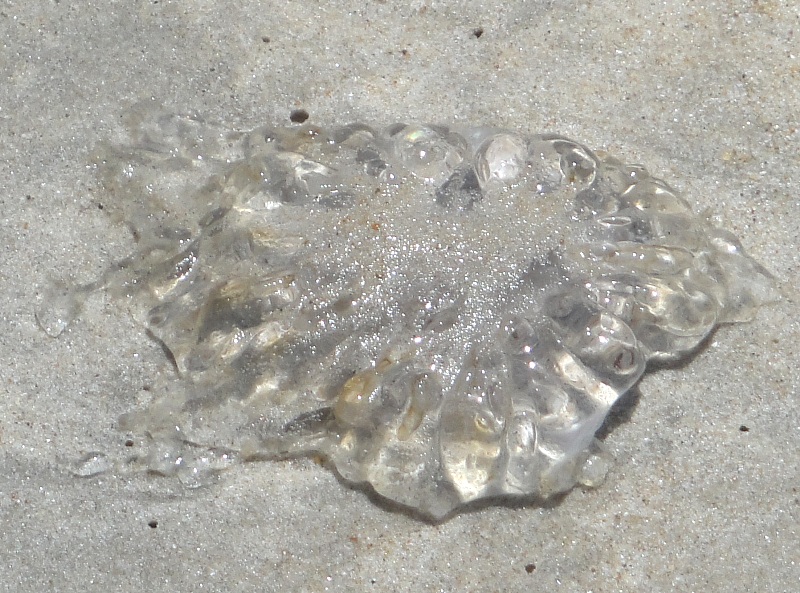 Ambulances were summoned for at least two people who suffered allergic reactions to jellyfish stings the past few days. The first was a 9-year-old girl stung around 9:50 a.m. Thursday. She was at Rehoboth Beach Patrol HQ. An ambulance came for the other patient, a 50-year-old woman, around 1:10 p.m. Friday at the Cape Henlopen State Park main bathhouse.

A 20-year-old man was injured after this motor scooter collided with a car on Lake Avenue just north of the Henlopen condo around 4:20 p.m. Saturday. 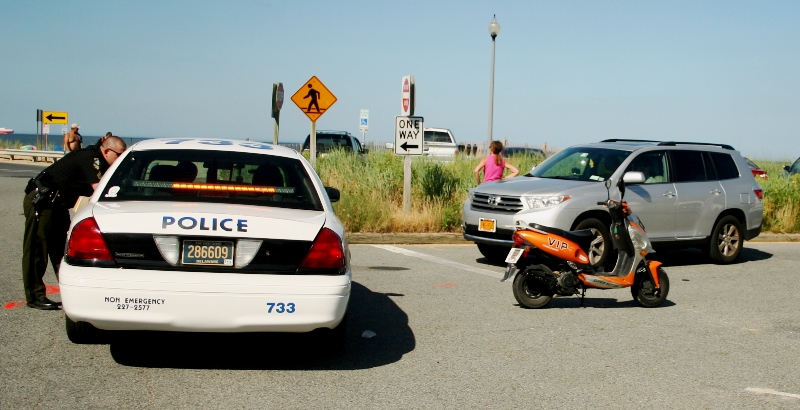 One vehicle pulled in front of the other, and the man on the scooter who wore no helmet was thrown to the ground. He was taken to Beebe Hospital by ambulance with non-life threatening injuries. 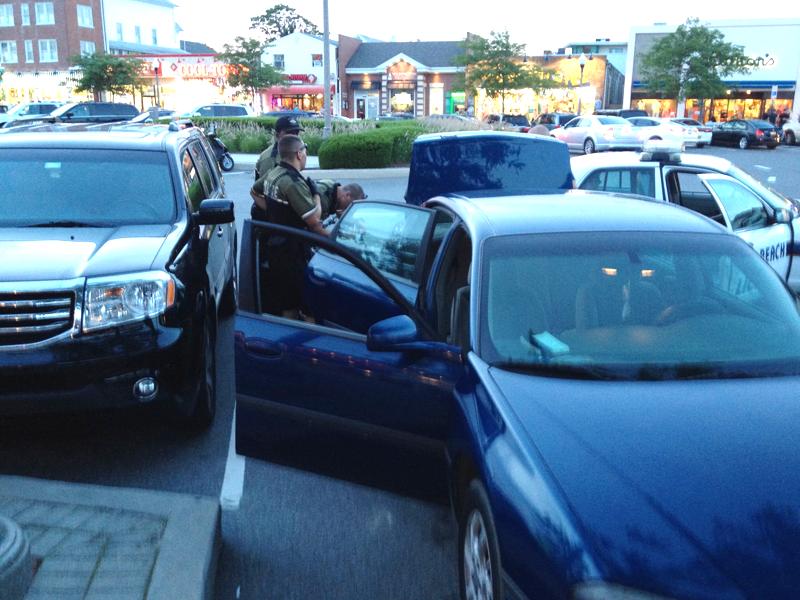 "The inspection [last Monday] went well," says Steve Rochette, public affairs officer for the U.S. Army Corps of Engineers. "The contractor is preparing to de-mobilize and should be gone sometime on Wednesday," he added. But the construction equipment remained in the Deauville parking lot for the holiday weekend.

This is "good news for all of the residential and commercial properties on the beach block," says Brian Hancock, Star of the Sea condo manager. "At last we can relax with the assurance that we are not going to flood each and every time we have a heavy down fall. [It's] time to put the sandbags away and to stop fixating on the city's drains." 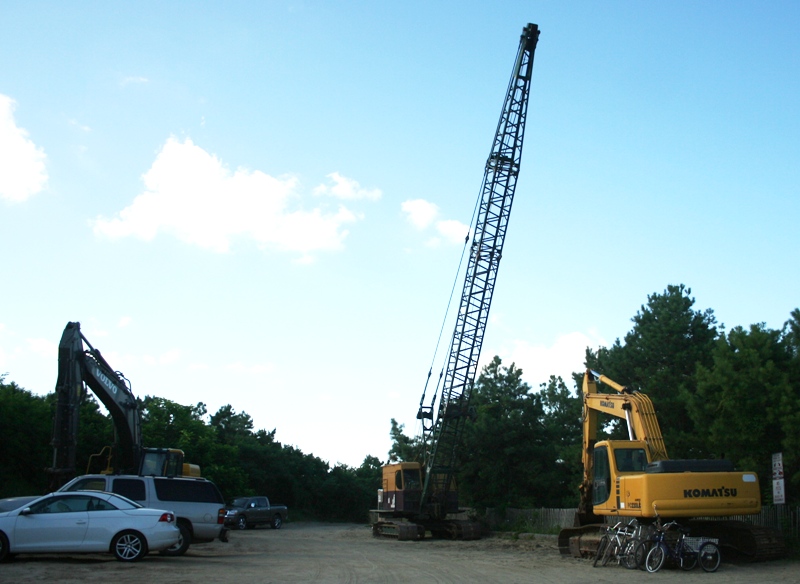 Soon the Army Corps of Engineers promises to put more sand on the beach. So the extended outfall pipes will be already in place to prevent future flooding.

SAVE OUR LAKES CALLS FOR 2013 CONSERVATION AWARD ENTRIES

Save Our Lakes Alliance 3 (SOLA3) is seeking applications for its 2013 Conservation Award. The award was created in 2009 to recognize individuals, civic organizations, governments and governmental agencies that have been exemplary in enhancing the overall environmental and ecological health of Lake Gerar, Silver Lake and Lake Comegys.

The 2013 winner will receive an artfully designed plaque and treated to a special presentation party. Criteria and applications may be downloaded from SOLA3's website. The deadline is July 20. Applications may be submitted via e-mail, saveourlakes3@aol.com, or mailed to: PO Box 1504, Rehoboth Beach, DE 19971 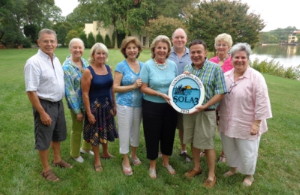 The 2012 award was given to the Lake Comegys Home Owners Association. HOA President Tony Burns holds the award along with Project Manager Joan O'Toole. 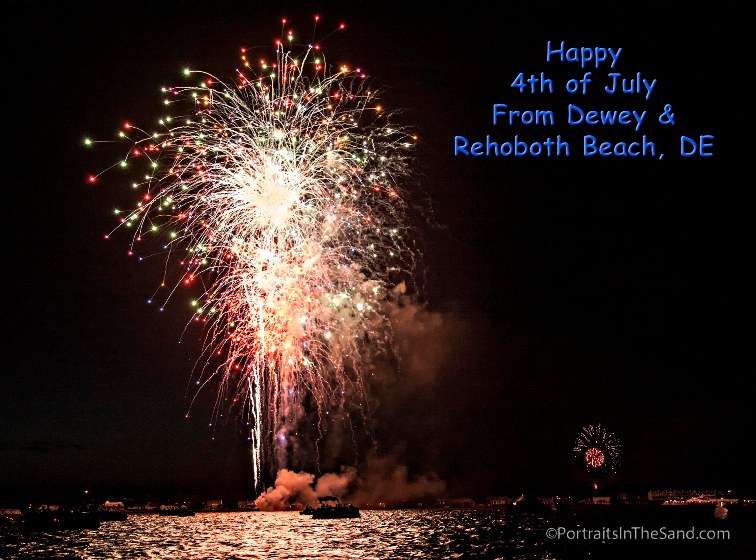 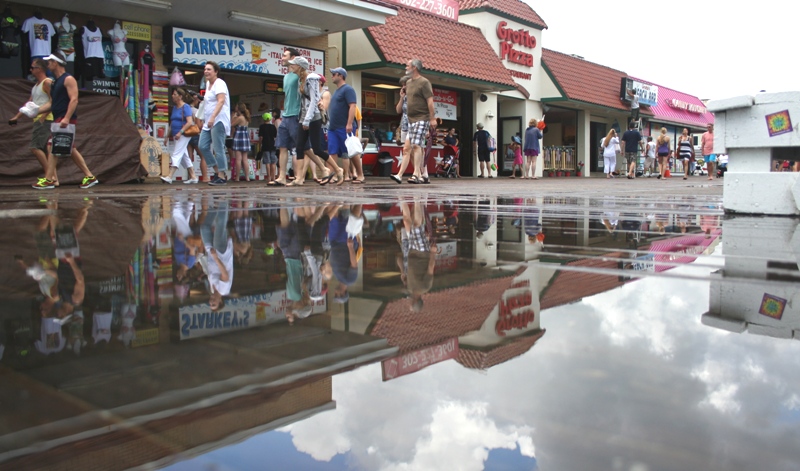 MAN, WOMAN, STRUCK BY DRUNK DRIVER SOUTH OF DEWEY--- A 79-year-old man was killed and his 75-year-old wife was left in critical condition after they were struck following the July 4th fireworks. The tragedy happened around 9:30 p.m. at Anchor Way south of Dewey Beach. Details are on the WBOC website and on Delmarva Now.

LEWES FIRE-POLICEMAN INJURED IN ACCIDENT--- A Lewes VFD fire-policeman assisting in Dewey Beach on July 4th was involved in a collision on Coastal Highway at Saint Louis Street around 10 p.m. Fire Chief Troy Virden says he was taken to Beebe Hospital where he was released the following morning.

BODY FOUND IN OCEAN, POSSIBLY THAT OF MISSING AMISH MAN--- The body of the 34-year-old man from Jordanville, NY who disappeared last Saturday morning while swimming in the ocean on the south side of the Indian River Inlet may have been located. According to a state police news release, a boater north of the Indian River Inlet discovered a body floating in the water this past Friday. The body was turned over to the medical examiner at the Coast Guard station. The ME will determine the deceased's identity, cause and manner of death.

SEARCH AFTER ARM POSSIBLY SPOTTED IN WATER--- Millville, Dagsboro and Frankford fire department marine boats were briefly diverted from fireworks details after a boater reported seeing what looked like an arm in the water near Indian River Acres around 6 p.m. Thursday. Firefighters searched for about an hour and discontinued after finding nothing.

LEWES FIREBOAT STRUCK BY ANOTHER VESSEL--- The Lewes fireboat was struck by another boat when returning from the Rehoboth Beach fireworks around 10 p.m. Thursday. The collision happened north of Lewes Beach in the Delaware Bay. Lewes Fire Chief Troy Virden said there were no injuries and the fireboat sustained only damage to a lamp lens. DNREC Sgt. Gregory Rhodes says the operator of the other boat was charged with not having a rear white navigation light on. He added that the accident is still being investigated.

MOTORCYCLIST KILLED IN SELBYVILLE--- A 69-year-old motorcyclist was involved in a collision just before noon Saturday on Lighthouse Road at Hudson Road. He was taken by helicopter to the hospital where he was pronounced dead. Police say speeding and alcohol do not appear to be factors in the incident. Details are on the WBOC website.

STINGRAY VS. FISHERMAN--- A 37-year-old man fishing at the Indian River Inlet caught a stingray just before 8:30 p.m. Friday. He dropped the ray and it punctured his left foot. He was taken to Beebe Hospital.