It is perhaps the closest Rehoboth Beach will ever have to royalty. As promised, Today Show anchors Kathie Lee Gifford and Hoda Kotb went on the Rehoboth Beach tour this past weekend.

They are both known to Rehoboth. Gifford's parents owned property in town for years while Kotb had spoke of her previous visits to Rehoboth Beach on the Today Show.

They received the red carpet welcome - everywhere - with the city reserving them parking spaces and a police officer escorting them during much of their tour. 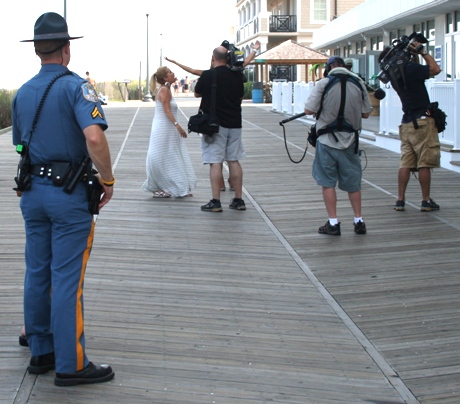 Two photographers and a sound man followed them as they revisited the boardwalk and Funland. 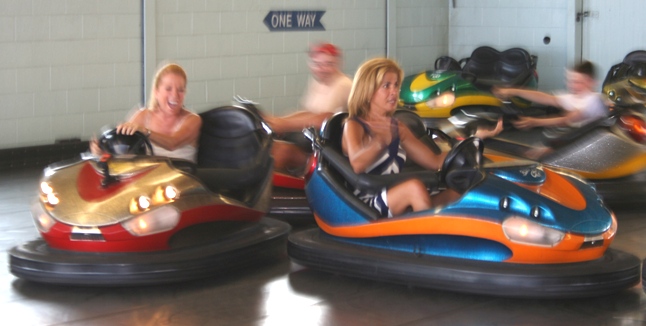 They played Skee-Ball alongside "little people." There was no need to go for change! Funland staff inserted quarters for them. They won or were simply awarded plush prizes for their short tournament. 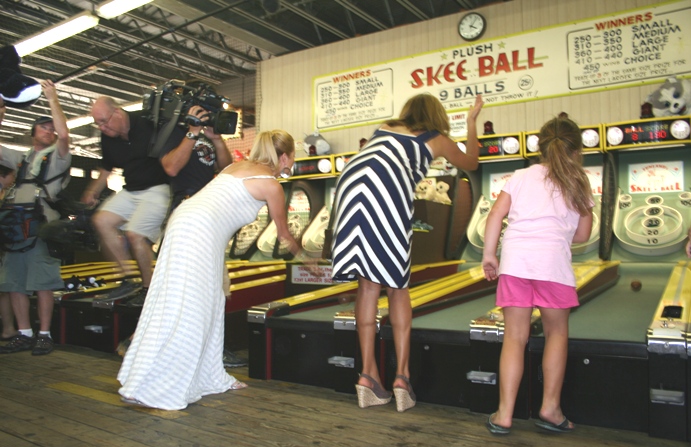 Then they challenged each other to a game of Whac-A-Mole. 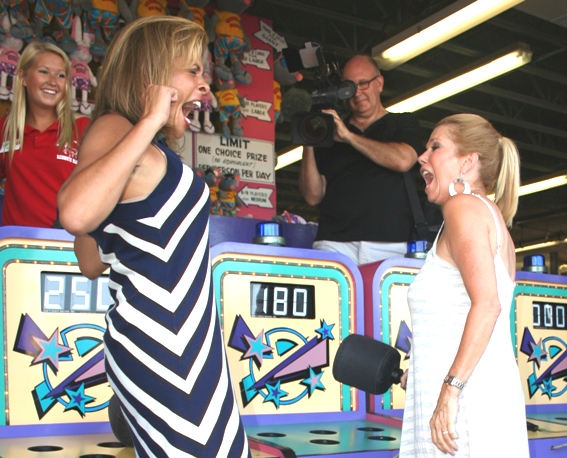 Throughout much of their Rehoboth adventure, crowds followed.

Not only were Gifford and Kotb promoting NBC's Today Show, they also promoted their books. Saturday morning, hundreds of visitors packed their book signing at Browseabout Books, which had been heavily promoting the event.

The Browseabout Books Website says the segment of their visit to Rehoboth Beach is scheduled to air on the NBC Today Show on Thursday, July 28. 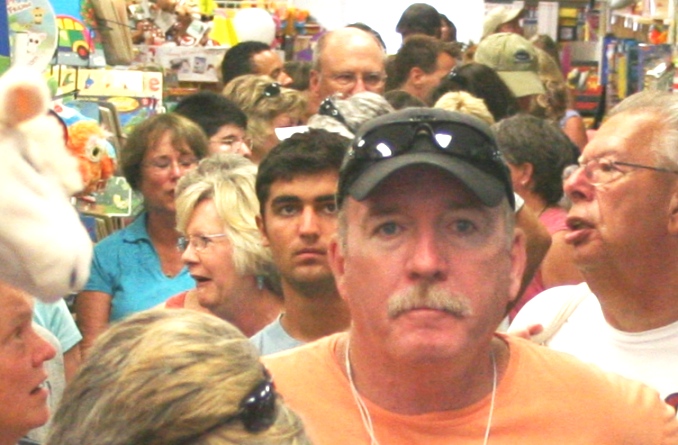 Visitors knocked books from shelves as they struggled to get a glimpse - and perhaps a photo - of the women signing their books. Store management later asked spectators not to take photos and not to ask them to sign memorabilia -- books only -- in an effort to speed up the line. 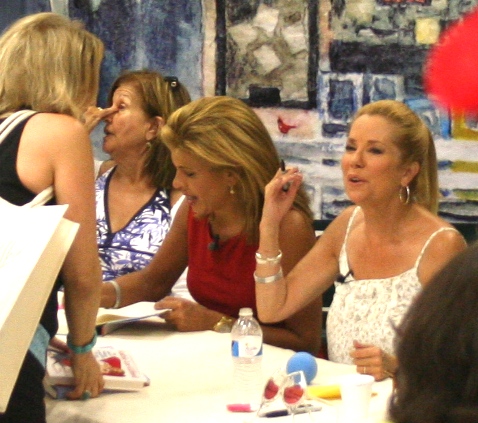 Kotb signed copies of her memoir, Hoda: How I Survived War Zones, Bad Hair, Cancer, and Kathie Lee, while Gifford signed her book, Just When I Thought I'd Dropped My Last Egg: Life and Other Calamities, and two children's books, The Legend of Messy M'Cheany and Party Animals. 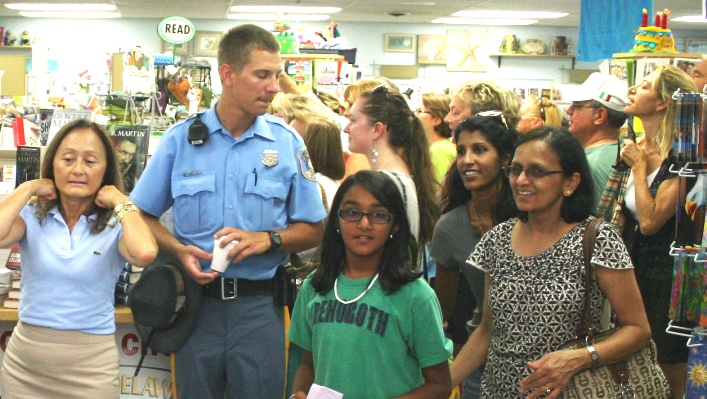 It was an interesting coincidence that Rehoboth Beach firefighters responded to a propane leak late Friday afternoon at a home next to one that was owned by Kathie Lee Gifford's parents. 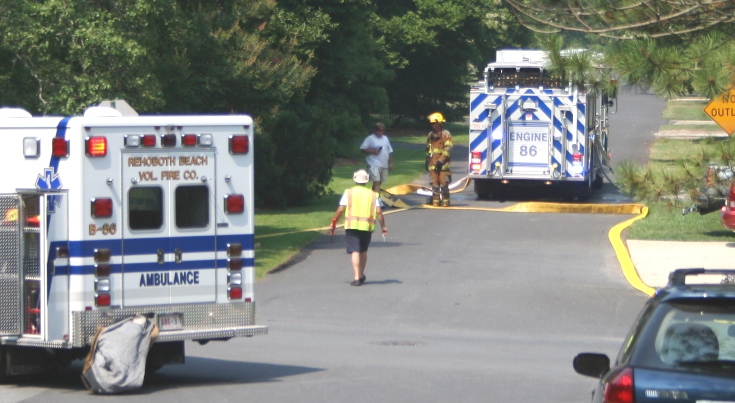 Firefighters received the call around 2:30 p.m. reporting a gas leak on Pine Reach at Zwaanendael in Henlopen Acres.

They discovered a leak beneath two 420-pound propane tanks. The gas company was unable to stop the leak, so firefighters sprayed the tanks with water until the gas escaped.

Oddly, three hours prior to this incident, a gas odor was reported in the area of Henlopen Avenue and Third Street, about three blocks away. But nothing was found.

With the extreme heat this weekend, EMS crews kept busy. They responded to 18 EMS calls in the Rehoboth fire district on Friday, 17 on Saturday and 16 on Sunday.

One of those taken to the hospital was a city employee from the Parking Meter Department.

He became ill around 12:30 p.m. Saturday. The driver of the parking meter repair van took him to the firehouse to summon an ambulance. 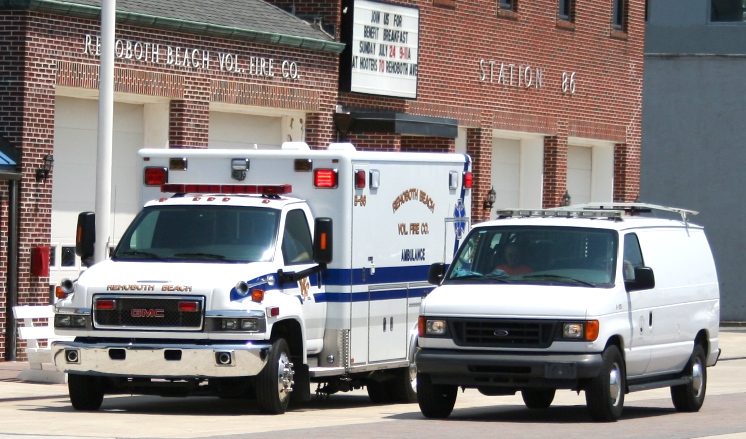 The 65-year-old was taken to Beebe Hospital. He had been working in the hot weather on both Friday and Saturday, and felt as if he were going to faint, but never did. He had been experiencing excessive sweating and vomiting.

In case you missed it, click here for Andrew Koch's (WGMD) report.

The event was well attended, by more than 100 people, which included many familiar faces seen around town. 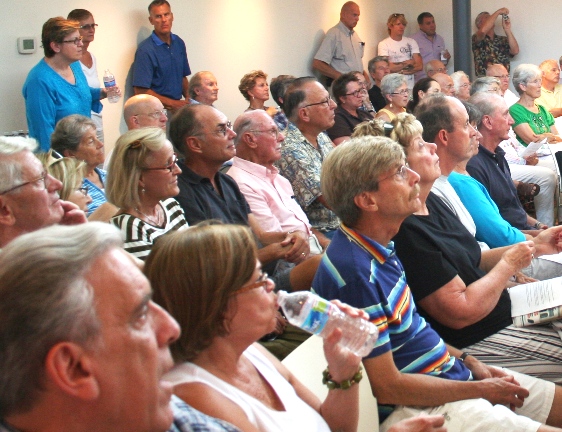 Only 19 days left until the election on Saturday, August 13.

Cambrian Life Explosion II, a mix-media by Geraldine Czajkowski welcomes art collectors and artists to Corkran and Tubbs Galleries, a wonderful show now open from July 22 through August 16 at the Rehoboth Art League.

Pottery in the Homestead, through August 26, is also a wonderful show. A dancing Gaea joyfully emerging from sea waves, and the finest pottery designs, are available for the best collectors at incredible prices. A small and eloquent sample of the refinement of our best craft-makers, the show invites us to take everything home, and even use these delightful pieces.

Not only a great show, we had the chance to sing happy birthday to Nick Serratore, a clever artist who helped the showing of Rehoboth Art League's presentations with his elegant and inviting view. Don't miss these shows, and be there before somebody else takes the art you deserve. 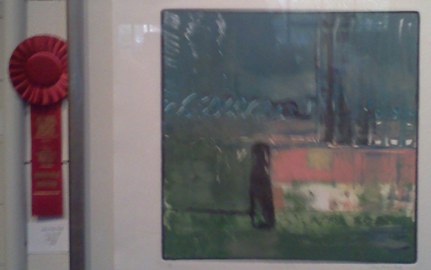 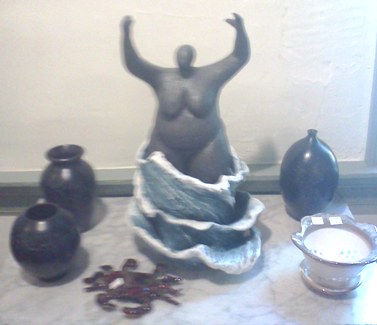 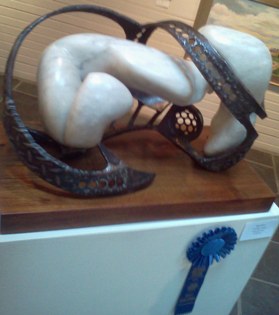 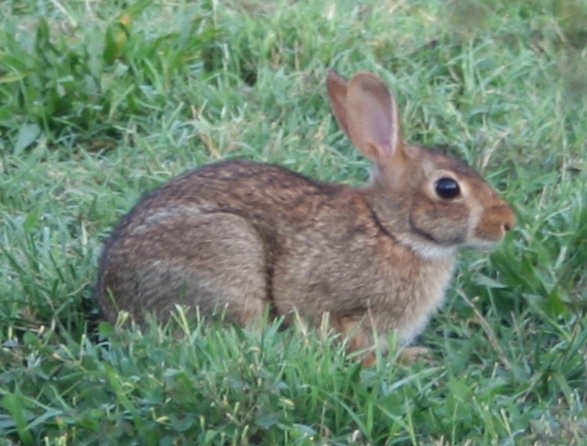 BIZARRE SEARCH OFF CAPE HENLOPEN--- A man who had been in the ocean at Cape Henlopen State Park's main swimming beach told lifeguards he felt something, possibly a body, brush against his leg around 2:45 p.m. Saturday.

While investigating, another person or group of people in the water in line with the man also reported a similar encounter. They described what they thought could have been a hand with fingers. But the object was submerged as it swept past them.

The helicopter crew spotted several dolphins off the point. But no one was reported missing and nothing else was found. The search was discontinued around 4:20 p.m.

MAN REPORTED STRUCK BY LIGHTNING--- EMS personnel were sent to Germantown Road south of Berlin around 1:40 p.m. Sunday. A 46-year-old man was complaining of loss of feeling on the right side of his body. He was taken to Atlantic General Hospital. EMS personnel said he "thinks he was struck by lightning but not sure."

O.C. SURF INJURY/ MEDEVAC--- A 13-year-old boy was injured in the Ocean City surf around 1 p.m. Friday and was flown to a trauma center. It happened on 28th Street. He suffered a cut to his forehead when he fell to the ocean floor, and was experiencing numbness and tingling in his legs and pain in his neck. The state police helicopter landed at Jolly Roger Amusement Park.

MOTORCYCLIST MEDEVAC'ED AFTER CRASH--- A 49-year-old man wearing no helmet was seriously injured after he rode his motorcycle off the roadway into trees. It was reported around 9 p.m. Saturday on Cordrey Road between Millsboro and Long Neck. He was flown to Christiana Hospital.

REHOBOTH BEACH PHOTOGRAPHER COMPLAINT--- "There's a man down here that's like taking pictures of us slash other people," the guard from the Delaware Avenue lifeguard stand said over the radio late Saturday afternoon. "Should we tell him to stop?" she asks her supervisor around 4:45 p.m. "Like he seems harmless but [she cuts off]."

A guard said he would speak with the man. They later warned other guards to keep an eye out for the man who wore an orange button-down shirt.

EARLY MORNING O.C. FIRE ALARMS--- Ocean City firefighters responded to four early morning fire alarm activations on Saturday and Sunday. The first was reported around 12:40 a.m. Saturday at the Carousel at 11700 Coastal Highway. The fire alarm reportedly had been activated when a fire alarm pull station was maliciously activated on the 10th floor. Some occupants evacuated, but there was no fire.

The fire alarm sounded at the Days Inn Oceanfront on 22nd Street around 2:25 a.m. Saturday. The source was suspected to be a detector on the third floor, but they did not know why it activated the audible alarm.

The alarm at the Mahalo Condo on 25th Street sounded around 2:15 a.m. Sunday. The problem was reported to be a detector on the first floor. But no fire was discovered.

About 15 minutes later, firefighters responded to a fire alarm at the Harrison Hall Hotel on 14th Street. They found a light haze of smoke on the third floor and eventually discovered what appeared to be clothing that had caught fire under a bathroom heat lamp. Occupants were allowed to re-enter the hotel after about 30 minutes.

How surfing beach locations are determined in OC

Extreme heat causing problems on beach and in cars

Another article on injuries at replenished beaches

Should there be 'last call' laws in your area? Are they discriminatory?