Having trouble viewing this report or its photos? Click here: http://henney.com/weekend09/ or e-mail alanhenney@aim.com

In Rehoboth, lifeguards typically tell visitors these sightings are rays or dogfish, as if the species name does not sound as menacing without the "shark" word. In Dewey Beach, the general euphemism lifeguards use is "marine activity."

These fin sightings could include rays, skates, and sharks (typically sand sharks). They do seem to share similar eating habits and feeding areas. Even seasoned lifeguards often struggle to determine if a fin is a shark or that of a ray or skate.

Every day this past week, guards in Dewey and Rehoboth reported several sightings, some skates or rays, but others convinced they saw sharks, even a couple "good size" shark reports.

Several times the lifeguards in both resort towns cleared portions of the surf as a precaution. It was eerie to see guards whistle swimmers from the ocean during the peak of the day. Not a sole was in the surf at Rehoboth Avenue, below, when a shark was supposedly spotted around noon on Wednesday. 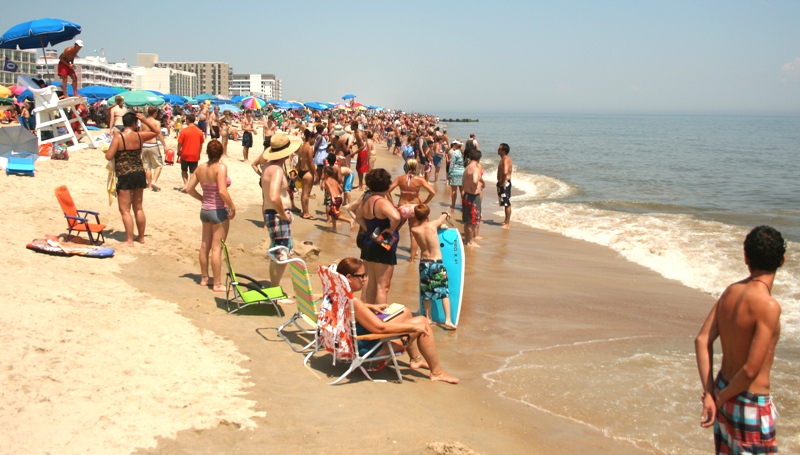 In Ocean City, Beach Patrol Capt. Butch Arbin said Saturday that the town has had no recent issues with any sea life.

Rehoboth Beach police investigated a broken window report at the Christian Science Church around 2 p.m. Friday. Police Chief Keith Banks says the reporting person noticed the window broken, cleaned the glass and secured the window before calling police. "The officer was unable to recover any evidence or signs of suspects walking through the mulch behind the Church," he said. "The Officer is also trying to determine if it was heat related."

Also on Friday, the window of the Bayside Rug Company in the second block of Baltimore Avenue was discovered broken. The shopkeeper speculated that the window was either struck by a rock or bike. 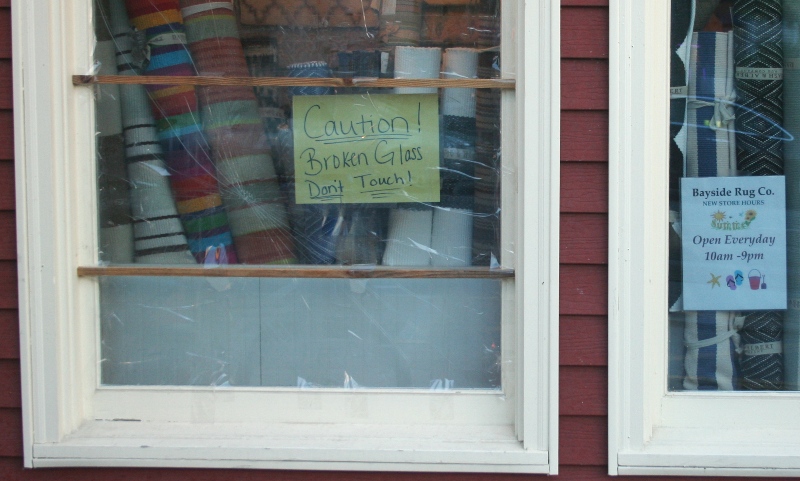 The restaurant was not being evacuated. Firefighters reported an electrical odor above the ceiling tiles in the kitchen area and eventually suspected the source was a light fixture.

Just when they thought the flooding problems on Laurel Street had been fixed by the recent outfall pipe extensions, water rose several inches above the curb and condo parking lot following Sunday's thunderstorm, causing flooding in the Star of the Sea garage. In total, less than two inches of rain fell Sunday, between 4 p.m. and 6 p.m. 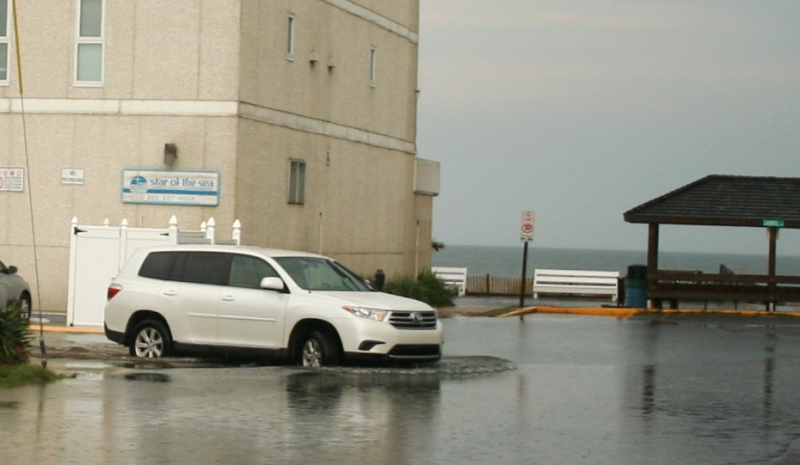 This major tree branch came down Sunday evening just as the thunderstorm had past Rehoboth Beach. It landed on top of a car and blocked the 200 block of Norfolk Street. But luckily, nobody was injured.

State police evacuated a bank and some businesses for several hours while bomb techs investigated a suspicious backpack Thursday morning.

State police said the backpack was discovered at the drive-thru of the Chevy Chase Bank on Coastal Highway at Old Landing Road around 8:40 a.m.

The bank was evacuated and some of the local establishments that were scheduled to open remained closed until the scene had been deemed safe. Fire-police and DelDOT personnel helped state police with some lane and road closures. 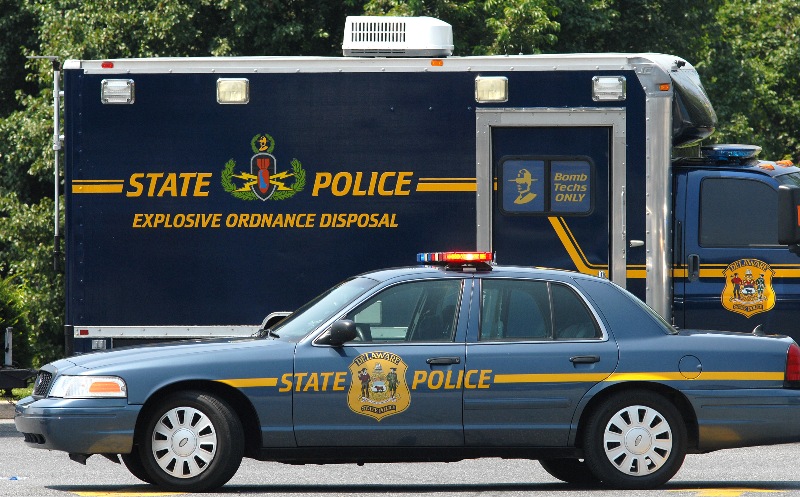 State police later determined that the "package turned out to be a backpack containing personal items." Employees and customers were allowed to return around noon.

An 83-year-old man crashed his motorcycle Saturday impaling a portion of the bike's windshield in his abdomen.

The accident was reported around 3:10 p.m. on Stephen Decatur Highway near Eagles Nest Road in the West Ocean City area.

An O.C. EMS crew took the man to the Ocean City Municipal Airport, below, where he was transferred to a state police helicopter that flew him to a trauma center. 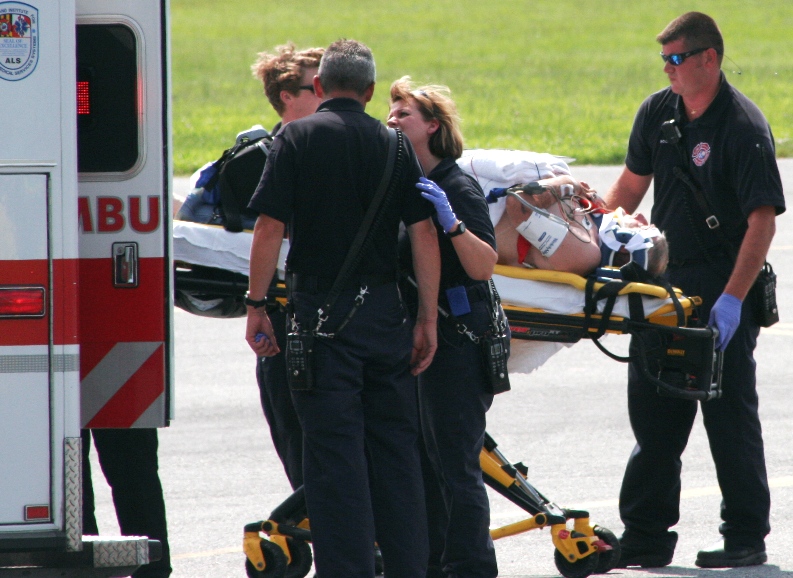 Amazingly, he was described as conscious when loaded into the ambulance.

Fenwick Island and South Bethany police pursued this vehicle in Ocean City Wednesday morning after the driver was reportedly involved in a hit-and-run accident in the Lighthouse Plaza parking lot outside Rehoboth around 9:45 a.m.

After causing several accidents along Coastal Highway in Ocean City, the man finally crashed and abandoned the vehicle at Jamestown Road near the Gold Coast Mall. 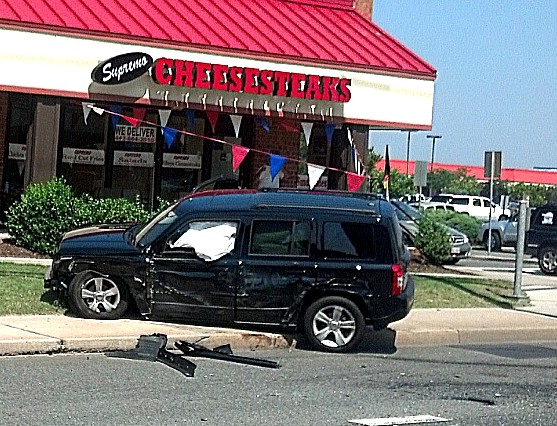 This is where police say he stole a bicycle, abandoned it a short time later and fled into the marsh behind the mall as he was pursued by two Delaware police officers.

Ocean City police arrived and eventually spotted the man who had fled to a sandbar about 100 yards northwest of Channel Buoy Road. Police say officers used a helicopter, Tasers, police dog and a less-than-lethal projectile launcher to finally subdue and capture the suspect. He has been identified as Brion Adam Kriss, 23, from Illinois.

A Rehoboth Beach parking enforcer caught this blue car just before noon Wednesday on First Street. The owner owed the city more than $900 in parking fines. Just as they waited for a tow truck, a woman came to the car and was informed about the debt. She said she had to check with her boss regarding the payment. They were told they had 15 minutes to pay the debt at the parking meter office or face getting towed. The car ended up getting towed when they failed to pay the debt.

Almost 24 hours later, another ticket writer caught a red Ford also on First Street just before noon on Thursday. The owner owed the city more than $700 but claimed that payments were being made through the city's collections agency, Capitol Credit. After several calls, it appeared that no payments had been made since 2012. The owner departed after making another payment to Capitol Credit by phone.

Here's Dick Lynam, 86, working at the Henlopen Acres Beach Club during this past week's heat wave. The Lynam and Catts families have run the beach chair/umbrella rentals on Rehoboth area beaches for ages. 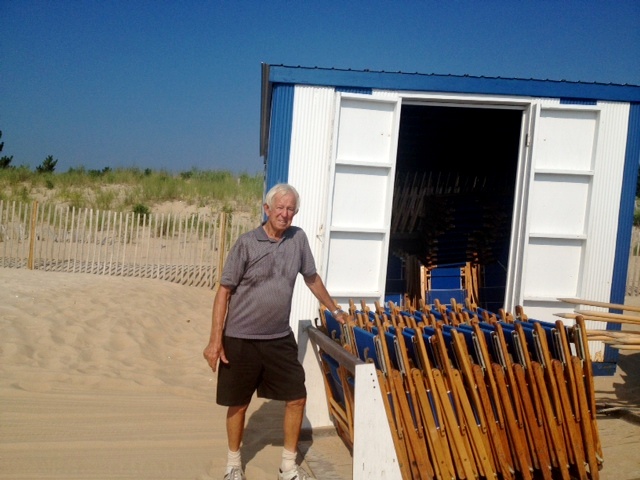 Lynam is out there practically every morning during the summer, says Tony Crivella, who runs the beach tractor sweeping service. "He and I were almost the only people on the beach in this heat wave," Crivella said. Even on the hottest days Lynam is out there every morning around 7 a.m. starting at the Henlopen Acres Beach Club where Crivella says Lynam typically sets up a long straight row of beach chairs and umbrellas by the surf.

"I clean North Shores once a week and see him in action," Crivella adds, and he is "sharp as a tack!" His son, David Lynam, by the way, runs the concessions in Dewey and as part of the contract has to empty the town's beach trash cans.

The symbolism of art coming out of the box, or coming out of the closet, or thinking of art outside the box, etc. is the framework for a new exhibition at CAMP Rehoboth. The works are deep, thoughtful renderings of some artists' innermost feelings.

Perhaps one of the cleverest works hangs just inside the front door. This is David Smith's Sea/Wolf. As the viewer steps back, the artwork takes on a different perspective (well worth seeing in person). 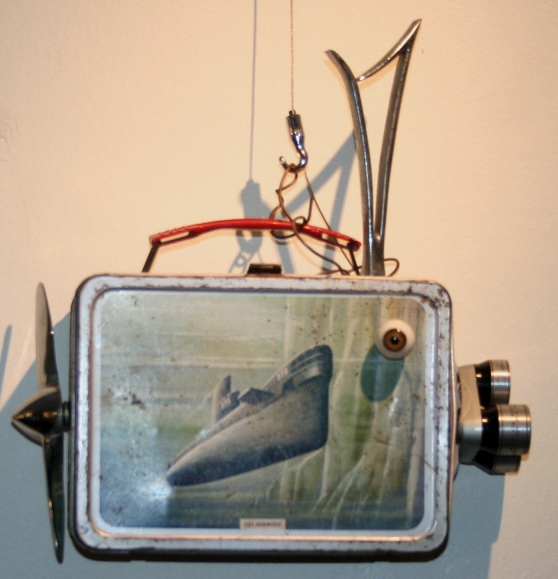 These boxes were created by artists from ART Enables in Washington, D.C. which focuses on artists whose disabilities include, but are not limited to, Down syndrome, autism, traumatic brain injury and bipolar disorder. Their ages range from 24 to 72. ART Enables helps to provide them with the ability to develop their art skills by promoting their artwork to tell their stories. 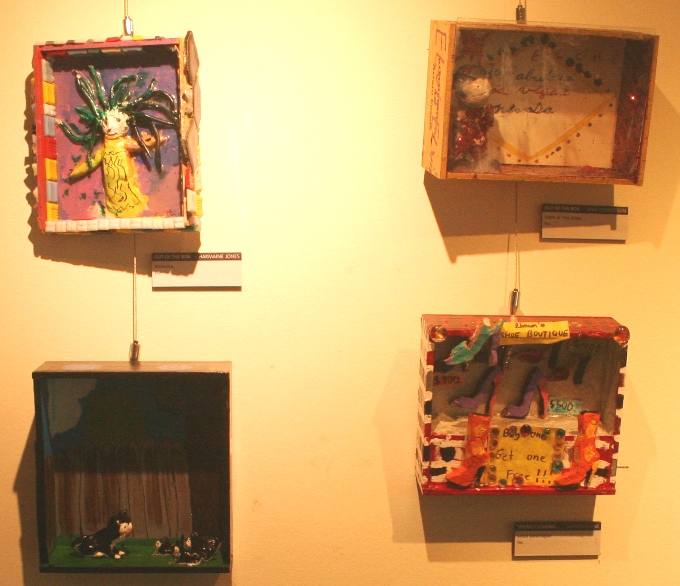 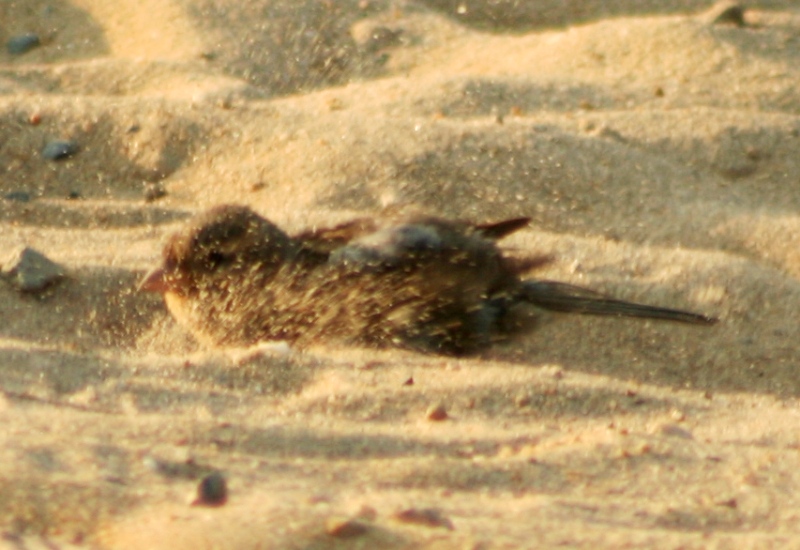 SUSSEX EMS CREWS RESPOND TO DELAWARE BAY FOR MEDICAL EMERGENCY ONBOARD SHIP--- For the second time this season, Delaware EMS personnel have been summoned to assist the Coast Guard with a medical emergency onboard a ship in the Delaware Bay about 12 miles north of Lewes.

Around 4:35 a.m. Saturday, a 54-year-old Greek male crew member onboard the Malta-flagged 274-meter Lipari crude oil tanker anchored in the Big Stone anchorage had reportedly taken a shower and collapsed in cardiac arrest. They had been at sea for six months. A Coast Guard vessel along with fireboats from Slaughter Beach and Lewes, Sussex County paramedics and the Delaware State Police helicopter, Trooper 2, responded to the ship. Trooper 2 was the first to arrive in less than 40 minutes.

CPR had been in progress on the man, but after multiple attempts to revive him, a physician granted orders to cease rescue efforts. The man's body was placed on Trooper 2 and flown to Beebe Hospital. An officer of the ship, along with the victim's wife, who was also onboard, were taken to Beebe Hospital with the assistance of the Lewes fireboat. Sussex County EMS reportedly plans to test the feasibility of using a CPR LUCAS device on the state police helicopter for future rescues.

COUNTERFEIT $10 BILLS SURFACE AT FUNLAND--- "We wanted to recognize the chamber [of commerce]," says Christopher Darr, Funland's personnel manager, "for putting out their fax blast about the counterfeits because we received that info and about 20 minutes later our money counting machines picked up the first of two that we received." Darr said one bad bill was received Friday night and the second one an employee took on Saturday. Both bills were $10 bills and Darr says they "were not great fakes. They were very worn and that might be why we took them in. One of the bills was printed off center more than the other one and both bills clearly did not have a watermark, security strip or the reflective number in the corner of the bill. Unfortunately, because our employees handle cash in a fast paced environment it is harder for us to detect the bills." Both bills were turned into the police.

MAN STABBED BY STINGRAY IN O.C.--- An ambulance was summoned for a 52-year-old man who said he had been stung by a stingray in the arm. He arrived at the Ocean City transit center on South Division Street around 2 p.m. Friday. A paramedic took him to Atlantic General Hospital in good condition.

INTOXICATED MAN PULLED FROM SANDBAR DURING EARLY MORNING O.C. WATER RESCUE--- Officials responded to two early morning water rescues in Ocean City Friday morning. Around 4:45 a.m., Ocean City officials received a call from a woman who reported hearing a male's voice yelling "I'm drowning" coming from the bay off 15th Street. Multiple agencies responded, but it was ultimately O.C. firefighters who spotted the man around 4:55 a.m. halfway across the bay.

They reached him around 5 a.m. He was standing on a sandbar at Mallard Island. The man was described as intoxicated and provided rescuers with inconsistent details as to how he ended up on a sandbar in the bay at that hour. He claimed he had been swimming with two other men and had lost track of them. All he remembered was leaving Pickles Pub but could not recall where he entered the water. The two other men, Dustin and Dwane, were eventually safely located at a residence on 10th Street around 5:50 a.m.

Just before this incident, rescuers responded to 14th Street on the ocean side around 4 a.m. That was for a man who had been reported missing in the ocean. He was safely located about 20 minutes later at 22nd Street.

Eating your way through Rehoboth

Commercial aquaculture: What's next in Delaware?