A man in his 50's was seriously injured Friday while in the surf off Stockley Street in downtown Rehoboth Beach. He was one of three visitors that day injured in the Rehoboth surf and removed from the beach by ambulance. 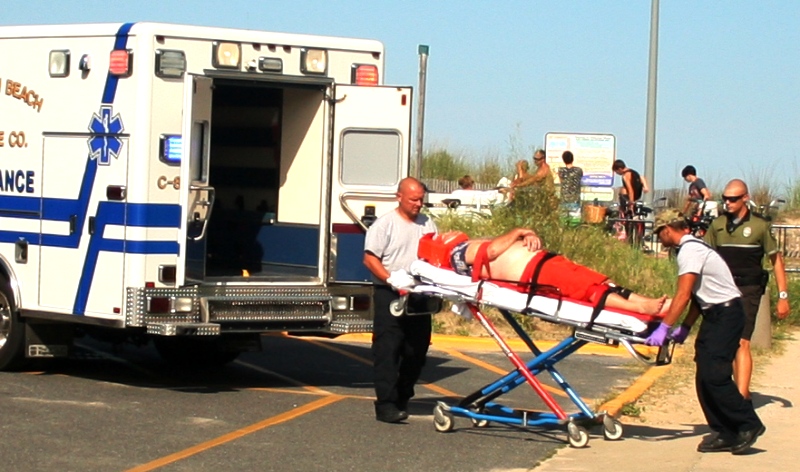 When he got injured around 4:35 p.m., lifeguards rushed to his aid. He had lost feeling in his arms and legs. They loaded him on the beach patrol Gator, transferred him to a waiting ambulance which took him to the Rehoboth Elementary School for a helicopter flight to Christiana Hospital.

The other two injuries on Friday were not as serious. About five minutes after the incident on Stockley Street, a 14-year-old boy complained of back pain after a surf incident off Pennsylvania Avenue.

Earlier in the day on Friday, a 46-year-old man suffered an injury to his left shoulder and rib around 11:10 a.m. at Brooklyn Avenue.

Poor weather probably discouraged people from going in the water on Saturday and Sunday.

But, on Sunday, an ambulance was requested for a 65-year-old man who suffered a suspected neck injury around 10:40 a.m. on Virginia Avenue. About two hours later, the Rehoboth Beach Patrol raised the red flag, warning beach visitors of the dangers and allowing lifeguards to decide if swimmers should enter the surf and how far. 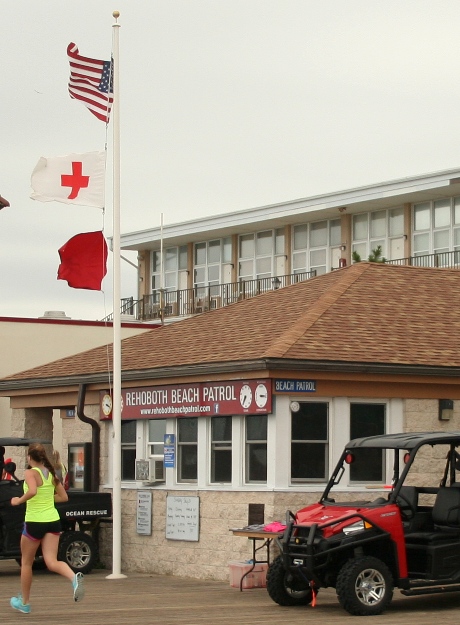 Rehoboth Beach was not the only resort to have people injured while in the surf the past few days. Ocean City EMS treated a 50-year-old man who suffered from paralysis and flew him to a trauma center early Thursday afternoon. Sussex County EMS crews took at least two more beach visitors to Beebe Hospital on Saturday. 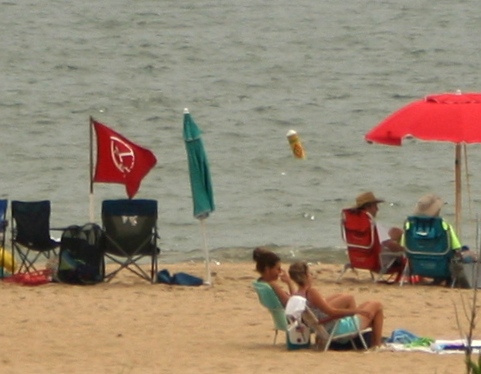 Beebe Hospital is participating in the beach safety study. The data recording location in Rehoboth Beach is marked with this buoy, just south of the Star of the Sea Condo, where surf injuries are common -- less than three blocks from two of Friday's surf incidents.

A scooter rider suffered critical injuries after he collided with a Mercedes SUV Friday night in downtown Rehoboth Beach.

The accident happened around 8 p.m. on King Charles Avenue at Norfolk Street.

The 19-year-old man on the scooter was reported unresponsive for about 10 minutes, and then he became confused and combative, suggesting a suspected head injury. He wore no helmet.

The scooter struck the driver's side of the Mercedes SUV in the intersection. Lt. William Sullivan, police spokesman, says the driver of the Mercedes has been charged with making an illegal U-turn, no proof of insurance, and failure to signal.

The operator of the scooter was taken to Beebe Hospital and later transferred to Christiana Hospital. Lt. Sullivan said Saturday the scooter driver was last reported in critical but stable condition.

Around 5 p.m. Friday, another scooter was involved in a less-serious encounter with a vehicle on Holland Glade Road at Rustic Acres Lane, outside Rehoboth. The 50-year-old male scooter rider suffered left hip pain and some memory loss. He was taken to Beebe Hospital. About an hour later, Rehoboth Beach police took another scooter accident report with no injuries at the traffic circle.

Beach visitors spotted the Pirate King, a 52-foot chartered vessel, fishing off Pennsylvania Avenue in Rehoboth Beach Saturday morning. Some of those watching became concerned when the men onboard the boat threw fish guts overboard to attract sand sharks.

With fear still from the recent shark attack in the Cape Henlopen State Park, DNREC and the Coast Guard received calls about the situation. One DNREC ranger said there was nothing illegal about the practice, even if the boat were 100 to 200 feet from shore, as some claimed. 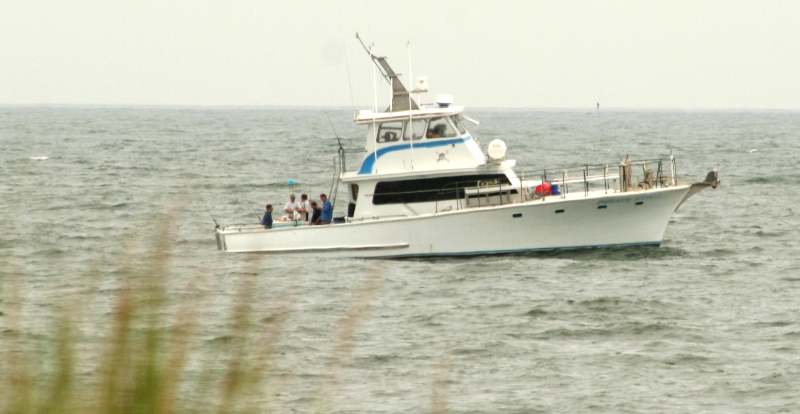 Captain of the Pirate King, Capt. Ted, confirmed Sunday that they had been dumping fish remains in the ocean to attract, catch and release sandbar sharks. He said he was 200 to 300 yards, not feet, from the beach and was operating well within legal limits. He also said nobody contacted him with any complaints and no swimmers would be threatened by the sandbar sharks. The charter fishing vessel comes from the Anglers Fishing Center in Lewes.

Lori Twing and Jean Brolund, volunteers with the MERR Institute, spent Saturday morning watching the ocean off Queen Street in Rehoboth Beach for dolphins. They counted eight between 9 and 11 a.m. for the annual dolphin count. Pre-designated observation points this year covered the Delaware coast from Fenwick Island to Woodland Beach.

Suzanne Thurman, MERR Institute executive director, said she will not receive the forms back until early this week. She noted that they counted 25 dolphins, not as many as usual at Herring Point, but water conditions made visibility poor. 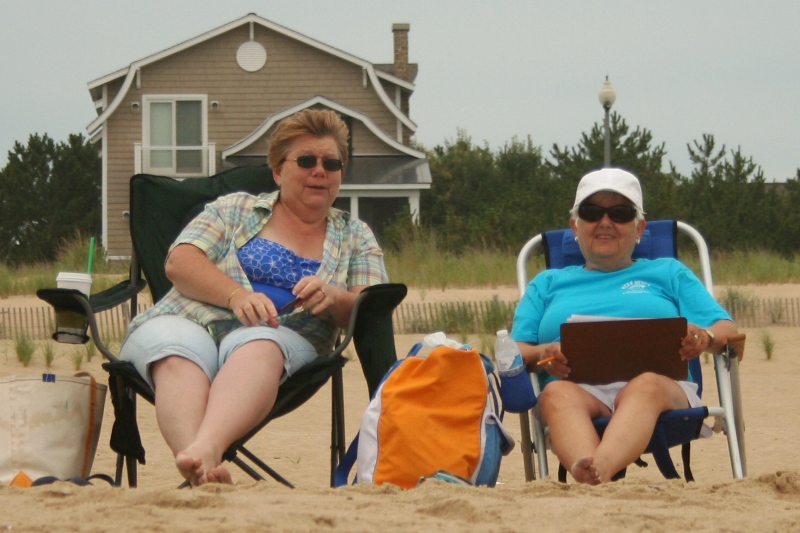 In other MERR news, Thurman said her group investigated the deaths of two huge loggerhead sea turtles Thursday and Friday. Both appeared to be boat propeller victims. The most recent was discovered Friday afternoon near the Point in the Cape Henlopen State Park.

Rehoboth Beach seems to experience a couple of these each summer. The pavement opened Friday afternoon in the ocean block of Delaware Avenue. This appears to be the site of a previous excavation. 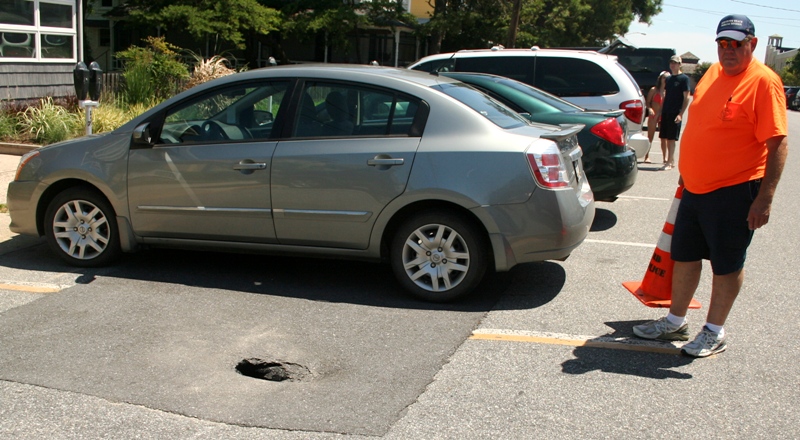 A tech from the Parking Meter Division promptly marked the hole with a traffic cone until it could be patched. 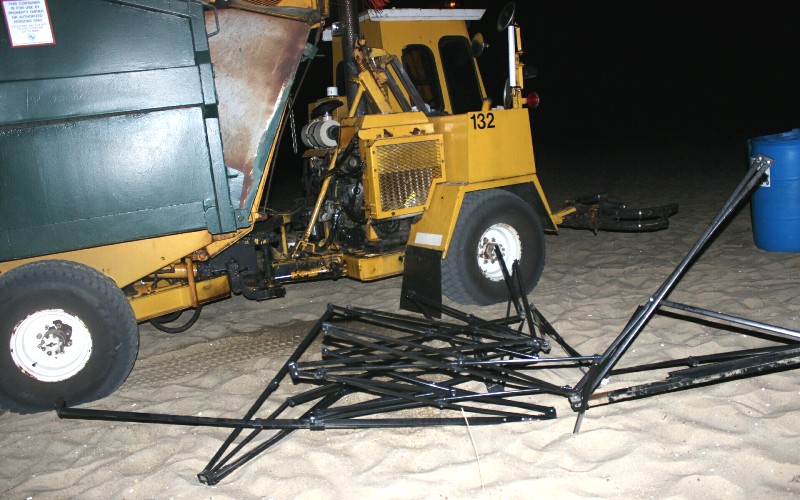 An Ocean City beach trash truck became disabled after 10 p.m. Monday by a broken pop-up canopy frame at 81st Street. The truck is one of the vehicles specially designed to grab and dump the town's beach trash cans using an arm attached to the front of the truck. 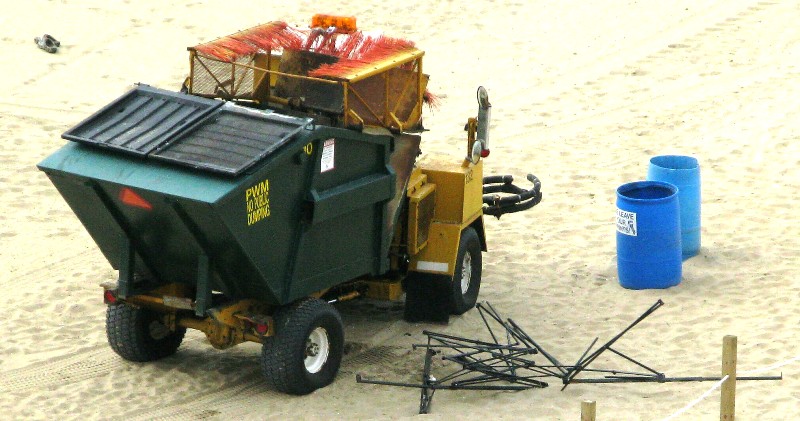 The canopy frame flipped up, struck the right side mirror and then hit a hydraulic line causing a disabling leak. The equipment operator said he was "making good time" on his nightly run until he hit the broken canopy frame. The trash truck was totally disabled and leaked at least a quart of hydraulic fluid. The driver waited an hour after reporting the incident. Tuesday morning, the hydraulic line was fixed and the truck was driven off the beach.

William and Greg Seaby documented a similar incident that happened on July 23, 2009.

Atlantic Refrigeration is a 2013 Better Business Bureau Torch Award Winner! For all your heating and cooling needs, please click here ...

A sweet spot on Sussex Street behind the Cultured Pearl has been providing free parking all summer long. But on Friday, two signs were posted and this note started to appear on windshields of vehicles parked in the lot.

This was the same lot used to construct the replica of the Paynter Studio as a benefit for the Rehoboth Art League. At that time, the owners allowed certain people who worked in town to park in the lot. But the lot's popularity grew and was often packed with cars in recent weeks.

Seth Bratten, better known as "Seth Da Highway Dancer," returned to his post on Coastal Highway this past Wednesday, nine days after he had been struck by a truck while crossing the highway.

He started dancing on Thursday and by Friday, below, he was almost back in full swing. He said Friday he wants his fans to know that he is "alive and walking." 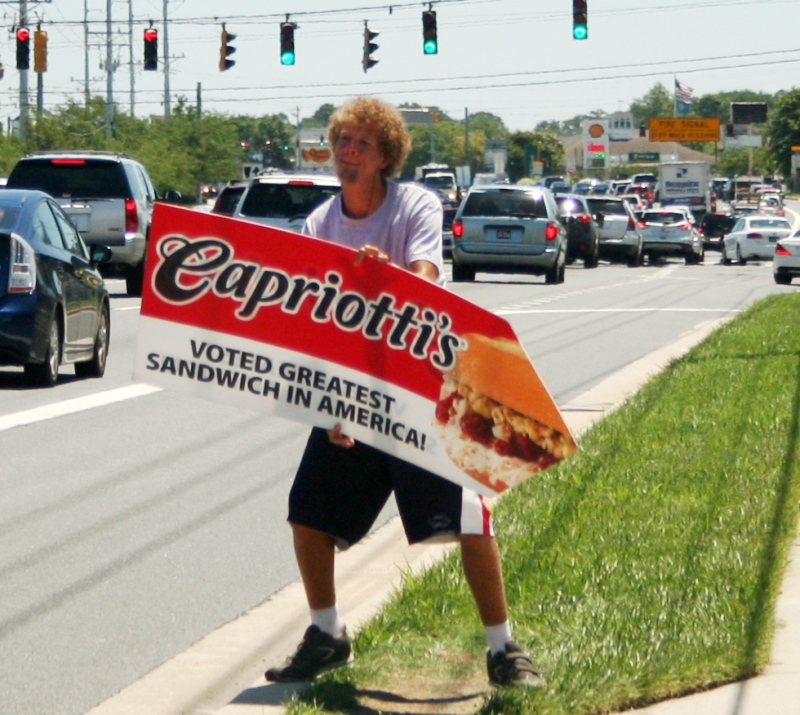 As somebody who lives and performs along the highway, he has much wisdom to share with passer-bys. It was "as dumb as hell to put a hotel overlooking a cemetery" he said about the new lodge going up on Coastal Highway. And he also expressed support for the woman who runs the adjacent soup kitchen. "Keep the soup kitchen and leave her alone," he said. Another pet peeve of his is the lack of crosswalks on Coastal Highway north of Dewey Beach.

"You can't have mental breakdowns," Bratton added, "because that is where you lose it."

If you have not already done so, you can keep up with him on his Facebook page. He's always looking for new gigs too.

Washington has sent us two fascinating artists! Butterflies, flowers and beautiful color greet us and the delicious summer.

It is a pleasure to see two Washington/Rehoboth artists with such talent. Gary Fisher and Glenn Fry, studio mates since 2004, well established for many years, extremely talented, not only in America but worldwide, have a joint show at the Philip Morton Gallery.

Half of the exhibition focuses on Fisher's latest abstract series, oil on canvas or wood panel. It features lots of color and is also monochromatic.

His giant flower oil painting was inspired by his visit to South Africa, an exciting and heartwarming painting which will delight most anyone. Fisher has been doing lots of international travel, recently visiting northern India. He says he takes many photos and many places he has visited inspire his work.

A master of oil painting, Fisher uses many layers, in thin overtones, sometimes as many as 30, such as in the painting below, to get the color and texture just right. 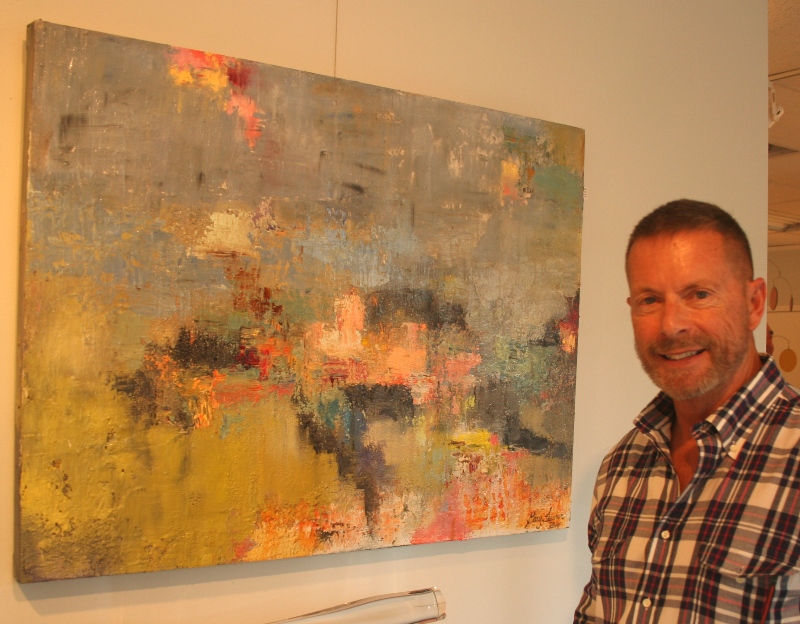 Fisher's experience is so extensive it is difficult to summarize it all in one short article. He has exhibited in numerous galleries, embassies and government buildings. Fisher was selected by the State Dept. for the prestigious Art in Embassies Program in 2001. His work appeared in various U.S. embassies throughout the world until 2005. Fisher is a Wyoming native who received both his bachelors and JD from the University of Wyoming. He studied art at the Corcoran School in Washington, D.C. and is a graduate of the Vander Zee School of Art in Alexandria, Va. He resides in both Washington, D.C. and Rehoboth Beach.

The other half of the show includes works from Fisher's studio mate, Glenn Fry.

Fry's colorful "flutter" exhibition makes one think happy thoughts, summer, flowers and butterflies and the miracle of the world which is encompassed in the butterfly. The butterfly represents a world, represents us and our soul, Fry tells us.

Butterflies accomplish an amazing lifecycle but only live for the moment. Fry says he designed his butterfly series, modeled roughly on the Monarch, for summer. It is more portable than the sea shells and lighthouses we see often in summer art. It is amazing to consider a beautiful creature and remember that our life passes very quickly and at great speed from beginning to the end. Fry catches the beauty and mystery of the saga of the butterfly beautifully.

Fry, pictured below, left his career in corporate advertising to pursue a career in fine arts. Not many artists use his screen-printing technique that Andy Warhol made popular. Each color requires a separate screen and he works in reverse. Each one is done by hand, not by computer. 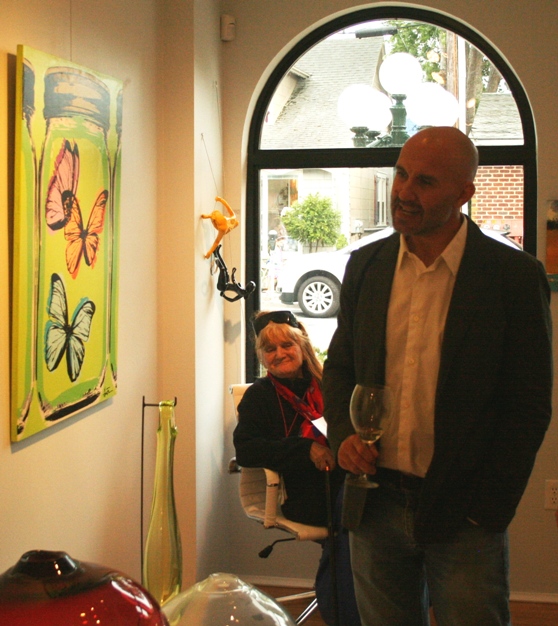 Above is one of Fry's silkscreens on wood, "Captured Moments." Both artists' works will be at Rehoboth's Philip Morton Gallery through August 5.

MAN SERIOUSLY INJURED IN EARLY MORNING SOMERSAULT INTO O.C. SURF--- A man lost all feeling below his chest after he performed a somersault in the Ocean City surf at 17th Street around 3:45 a.m. Sunday. He struck his head and bystanders pulled him to safety. EMS personnel wanted to fly him to a trauma center but the helicopter was grounded because of weather.

This report is being e-mailed to 1,879 recipients. Thanks for your support!