Having trouble viewing this report or its photos? Click here: http://henney.com/weekend11/

A bold daytime armed robbery in Dewey Beach touched off a multi-hour multi-agency manhunt that has so far resulted in the arrest of one of the two suspects.

Dewey Beach police received a call around 3:15 p.m. Sunday from a man who said he had been beaten and robbed by two other men around 3 p.m. The robbery reportedly happened at Bayard Avenue and Swedes Street, at the Dewey Beach city limits.

Two men had gotten out of a car at the stop sign, jumped the victim and -- at gunpoint -- took his beach bag, towel, book, wallet, money, credit cards, driver's license and cell phone.

Police interviewed the victim and attempted to find additional witnesses. They quickly developed leads and were looking for two men who fled in a 1997 black Lincoln Town Car.

"It is going to be up north, I guarantee it," Sgt. Dempsey told officers over the radio. And right he was! A Lewes police officer spotted the Town Car parked outside an apartment complex near 2nd Street and Savannah Road around 4:50 p.m.

Officers from several police agencies surrounded the location. Shortly after officers spotted the suspects, both men attempted to flee on foot. The state police helicopter joined the manhunt, but prior to its arrival, police had captured one of the men. As of Sunday evening, the other suspect remains at large.

Police have not said what type of gun was used or if it has been recovered. The one suspect was taken to the Rehoboth Beach police station, presumably because it is a more secure facility. Police attempted to interview him Sunday evening, but have not released an official statement as of midnight. Police also impounded the Town Car and stored it at a secure location for evidence. 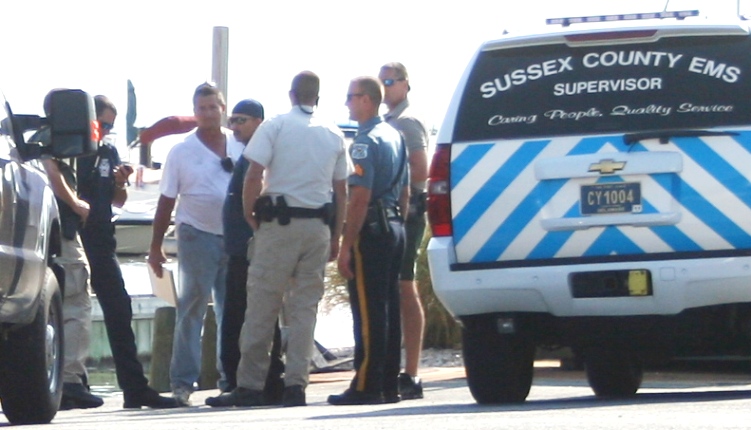 An unconscious man was discovered floating in the Rehoboth Bay late Saturday afternoon, and DNREC marine police are trying to determine what happened.

The first call for help was received around 3:40 p.m. from a boater southwest of Dewey Beach who reported that a Hobie Cat capsized and the man on board did not resurface.

Kara Ritter says she was one of seven women on a pontoon boat who came across the incident. A couple on a small boat flagged them down shortly after they departed the Rusty Rudder dock. "They came upon the body first," Ritter said. Her sister who is a registered nurse "along with my other sister and a friend jumped in the water to see if he was still alive - he had no pulse. We called 9-1-1," she said. The call was made around 4:10 p.m. "The girls stayed in the water with him for at least 20 minutes - it was extremely rough out - until help arrived," she added.

They were unable to remove the man from the water, but they remained with him until help arrived. A boat from the Delaware Marine Group came to assist.

The men on board took the man to the Rehoboth Bay Marina ramp on Collins Avenue in Dewey Beach where Dewey Beach police, lifeguards, DNREC marine police, Rehoboth Beach fire/EMS personnel and county paramedics were waiting.

The man was pronounced dead at the scene and placed in the ambulance which took him to Beebe Hospital. The medical examiner has been notified.

Justin Redefer of the Delaware Marine Group said the actions of Jeffery Hertzog from the Delaware Marine Group went above and beyond. "He used one of our boats with one man from EMS. He helped lift the man out of the water [and] into the boat. Jeffery Hertzog and the individuals in the water holding the man until EMS arrived are outstanding. Thank God for people like them!"

Early Saturday evening, Sgt. Gregory Rhodes, DNREC spokesman, said that this appears to be a boating fatality. If so, it would be the second in the state for 2011. The previous death took place Memorial Day Weekend.

Sgt. Rhodes said the investigation is in its preliminary stages, but he added that investigators suspect the man had been on a sailboat in the bay when the incident happened.

He would only identify the decedent as an adult male. Sgt. Rhodes says additional details will be released Monday after the next of kin have been notified.

OTHER BOATING INCIDENTS THIS WEEKEND...

Fri. 6:31 p.m. --- Two Jet-Skis (or Wave Runners) reported in distress on the ocean side of the Indian River Inlet. They returned safely into the inlet prior to arrival of area fire companies.

Sat. 11:24 a.m. --- In the area of the Route 90 bridge west of Ocean City, a sailboat was reported in distress. Firefighters spotted the boat which simply appeared to have drifted to a rock pile. There were no injuries.

Sat. 7:37 p.m. --- Officials in Ocean City spent the late evening hours of Saturday searching for a 23-year-old man who was reported missing from a boat in the Assawoman Bay. The man was reportedly on the bow of a pontoon boat. A witness said he was last seen falling into the water between the pontoons, and he did not resurface. The incident happened off 126th Street and touched off a massive search involving fire companies and dive teams from Ocean City and Sussex County, assisted by state police and Coast Guard helicopters, along with Coast Guard and DNR rescue boats. WBOC reported additional details Sunday evening. 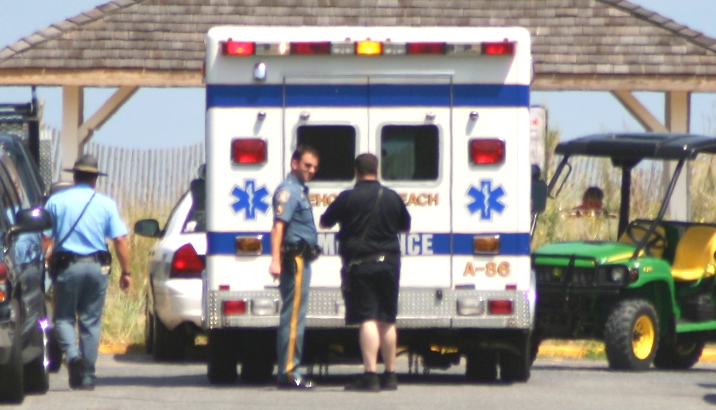 EMS crews responded to these surf-related injuries in the Rehoboth Beach fire district this weekend:

Fri. 12:14 p.m. --- Rehoboth Bay near West Bay Park, was initially reported as two children in distress coming to shore on a catamaran. But it was later reported as a 10-year-old girl who swallowed some water while swimming in the bay. Her parent declined an ambulance.

Fri. 1 p.m. --- Tower Road in the Delaware Seashore State Park, a 40-year-old man was taken to Beebe Hospital after a small collision while Boogie boarding.

Fri. 1:39 p.m. --- Norfolk Street, a 44-year-old woman suffered a possible dislocated right shoulder after she was knocked down by a wave and heard a "crunch" in her arm. [photo above]

The wheelchair-bound man said he had just lowered himself using a chairlift from the rear passenger side of the black RAM 1500 pickup truck. As he rolled from the lift, his cell phone slipped from his lap, and dropped in the storm drain directly below his chair. 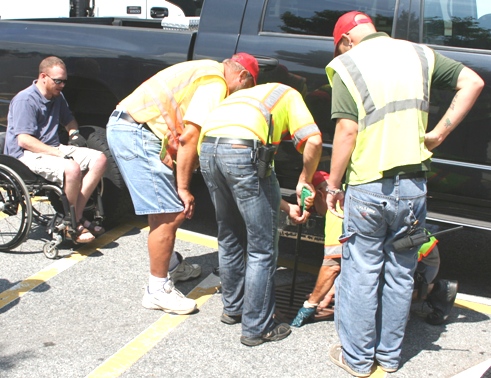 Around 2:40 p.m. Friday, Rehoboth Beach police radioed for a public works crew to assist. The man was in front of the library.

Five public works personnel arrived with a grip-tool which they used to successfully grab the phone and return it to him. He was delighted. 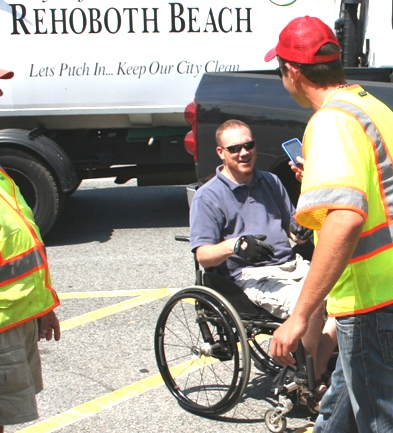 Five times this past week, Rehoboth Beach police have been called to ticket unauthorized vehicles parked in these spots in front of the Building & Licensing offices at 306 Rehoboth Avenue.

Both of these Ford trucks were ticketed on Wednesday. 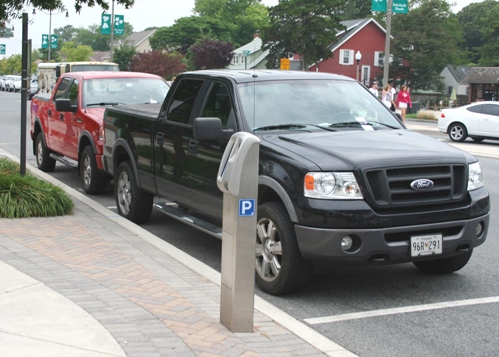 The parking spaces look like regular metered parking spots on Rehoboth Avenue, with the exception of this sign which appears between the spaces. 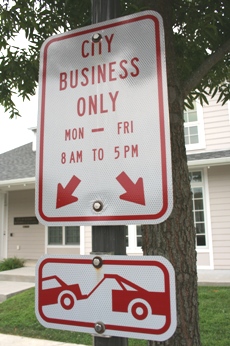 But people not on "city business" continue to park there. Most of the violators who park in these spaces even feed the parking meter.

The driver of this purple van returned as an officer wrote him a ticket on Friday. He said he did not see the sign. The officer let him go!

The sand artists built everything from traditional sand castles to animals, pool tables, memorials and food items. Entries were judged on structural engineering, use of materials, imagination and overall aesthetic appeal. Judges picked their top 10 favorite entries in children and adult divisions.

Larry Murray, a Montgomery County, Maryland firefighter won a prize for this tribute to September 11th victims. His family, Colin, Lindsay and Amy, contributed to the memorial which he had sketched out first on paper. 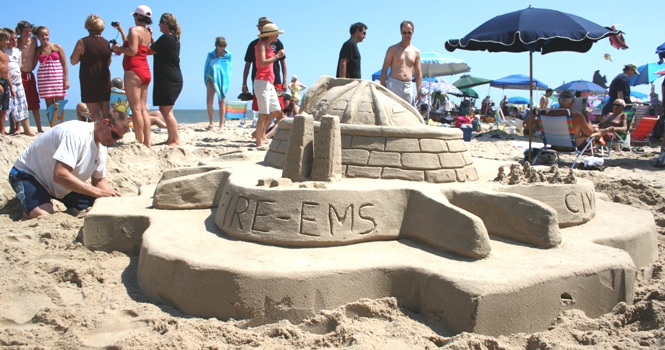 Another winning team was David O'Brien, Shai Segall, Kenneth Ludwa and Cheryl Wojciechowski from Washington, D.C. for "400 Years of Discovery." 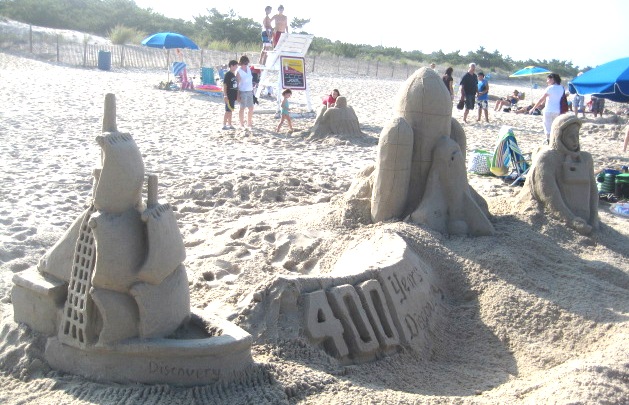 Who would expect to meet an artist behind the wheel of a tow truck in Dewey Beach, of all places?

This charming young man is Craig Dorman. We met him driving the Coastal Towing truck he operates alone every weekend. He says he was so happy to meet a smiling face that was not clawing or spitting or yelling at him. 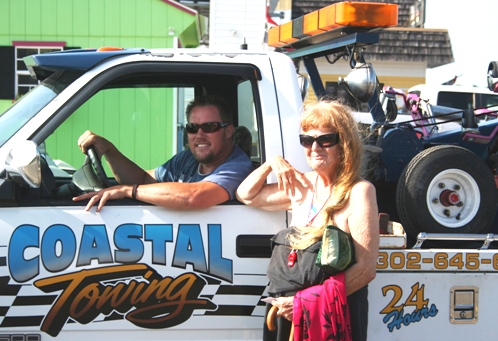 Craig custom-designs printing for T-shirts. Check his Website for details. His company motto is "You dream it, we screen it." 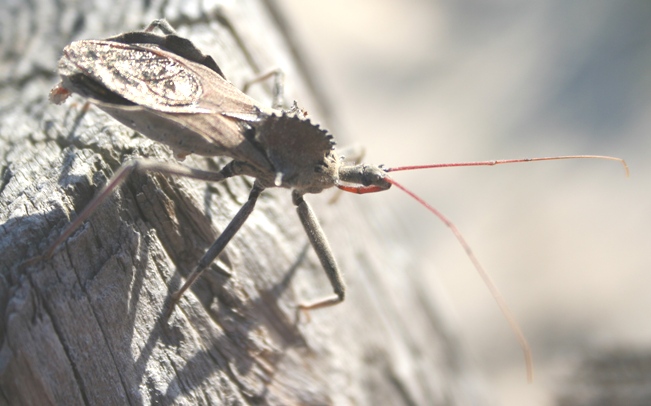 He says they can deliver a painful bite and you should avoid handling them. They are predators on soft-bodied insects and prey on many pest species of insects, so, Bailey says, wheel bugs are considered beneficial insects. 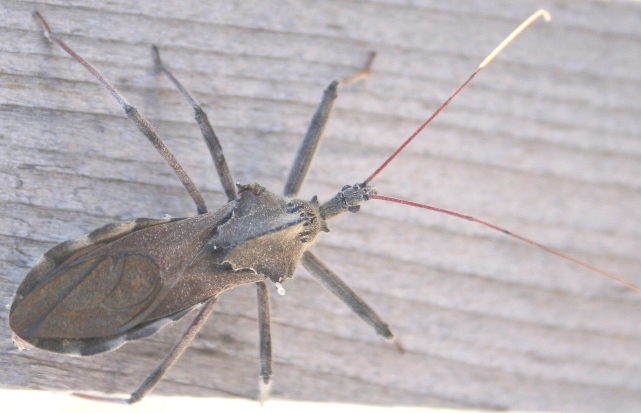 INTOXICATED MAN FALLS FROM DOCK INTO LAGOON, FLOWN TO TRAUMA CENTER--- An intoxicated 19-year-old man fell (or jumped) from a bulkhead into the bay at 53rd Street in Ocean City around 12:35 a.m. Saturday. He injured his head, was briefly unconscious, removed by bystanders and could not remember the incident when he awoke. He had no feeling in his legs and was flown to a trauma center.

OTHER O.C. MEDEVACS THIS WEEKEND--- Ocean City had three other incidents requiring a medevac flight this weekend. All happened Sunday. The first was a surf injury before 1 p.m. at 9800 Coastal Highway on the north side of the Plaza Condo. A 40-year-old man Boogie boarding struck his head and experienced tingling in his feet.

Around 2:10 p.m., another man Boogie boarding struck his head while riding a wave at the inlet lot. He too experienced trouble feeling his legs and feet and tingling in both hands. The final medevac incident was reported around 10:45 p.m. for a 73-year-old woman who was injured in a fall on Bayshore Drive.

MAN PULLED FROM O.C. SURF IN CARDIAC ARREST; POSSIBLE DROWNING--- Rescue swimmers from the Ocean City VFD pulled a man to shore after he was found floating in the ocean off 61st Street around 9:15 a.m. Friday. He was in his mid-40's or early 50's. They took him to Atlantic General Hospital in cardiac arrest. Less than 15 minutes later, firefighters were sent to 94th Street for a similar incident, but the person was safely out before rescuers arrived. The beach patrol was not yet on duty for the day.

CITY OF REHOBOTH BEACH SENDS FIRST E-NEWS--- The city had been collecting e-mail addresses for more than a year on its Website. This past Tuesday, the city sent its first E-News. It was a news release from the city manager regarding grant money for sidewalks. Commissioner Stan Mills, chair of the city's communications committee, says we can expect regular messages with agendas, press releases and emergency notices. Sign up for E-News on the city's Website.

EARLY MORNING FIRE ALARMS IN O.C.--- Ocean City firefighters responded to four early morning fire alarm activations this past weekend. The first was around 2:35 a.m. Friday at the Astoria Condo at 45th Street. Vandalism to a fire sprinkler head in the parking garage activated the fire alarm. Minutes later, a cardboard box on a stove filled an apartment with smoke at the Willow's Condo on 14th Street. Around 3:40 a.m., firefighters responded to the Belmont Towers on Dorchester Street. The condo was being evacuated while the alarm sounded. A fire sprinkler was activated and an alarm pull-station had been pulled for an unknown reason.

The only incident on Saturday was reported around 6:35 a.m. at the Capri high rise at 11000 Coastal Highway. An audible alarm was activated in the lobby, but there was no smoke or fire. A smoke detector on the 20th floor and a general alarm on the 9th floor may have caused the activation. Nothing was found.

Sussex developer is revealed as buyer of Bradley's property

Dewey Beach's alderman in the news