Having trouble viewing this report or its photos? Click here: http://henney.com/weekend11/ or e-mail alanhenney@aim.com

A woman is lucky to have been found alive after having disappeared in a remote marsh beyond the Rehoboth Beach wastewater treatment plant early Sunday.

She made the call for help from her cell phone around 3 a.m. Using cell phone locating technology, her location was tracked roughly to somewhere south of Spring Lake Drive near the city's wastewater treatment plant at the end of Bay Road.

Rehoboth Beach firefighters searched along the marsh while waiting for assistance from the state police helicopter. Around 3:18 a.m., one of them reported hearing the woman from the Thompson Island Trail. She appeared to be near the sewer plant, but they could not see her.

The state police helicopter, Trooper 2, arrived and spotted the woman at 3:33 a.m. The helicopter crew suggested using a basket to keep others out of the marsh, fearing they too may become stranded. The helicopter landed at the elementary school to prepare its rescue basket and returned to the scene. Around 3:57 a.m., the helicopter crew reported that the woman appeared to be getting into the basket and about a minute later they safely lowered her to rescuers waiting at the sewer plant.

She was not injured. Police spoke with her and she was taken home.

As an interesting coincidence, the Daily Times ran this article Sunday on 9-1-1 calls from cell phones in Ocean City.

Two beach visitors were taken to Beebe Hospital this past Sunday after suffering serious injuries from fly-away umbrellas. Around 4:50 p.m., the Rehoboth Beach Patrol called for an ambulance after this 60-year-old woman was struck in the head by an umbrella at Olive Avenue. She suffered a three-inch cut to the back of her head and was knocked unconscious. She was conscious when they loaded her in the ambulance.

A second person, a boy, was injured when he got struck by another umbrella on Brooklyn Avenue at 5 p.m. His injuries were not serious and did not require an ambulance. Average wind speed in Rehoboth Beach between 4 and 5 p.m. was 6 m.p.h. with a gust of 13 m.p.h. at 4:43 p.m. 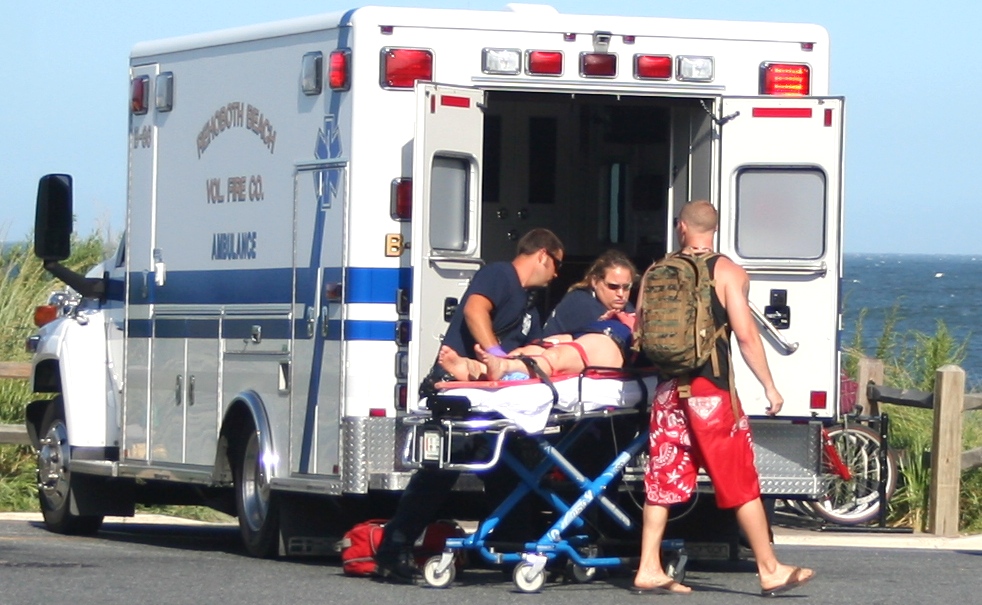 Earlier, around 3:15 p.m. in Bethany Beach, lifeguards and police ordered all beach visitors to close their umbrellas after a 30-year-old woman was jabbed by an umbrella on Oakwood Street. She was taken to Beebe Hospital with a one-inch deep wound to her hip. The average wind speed peaked between 3 and 4 p.m. in Bethany at 12 m.p.h. with a 19 m.p.h. gust at 3:42 p.m.

Ocean City also had trouble in the morning when a man was struck in the face by an umbrella. He was at the Capri Condo pool deck at 11000 Coastal Highway around 11:50 a.m. An ambulance took him to Atlantic General with a cut below his eye. 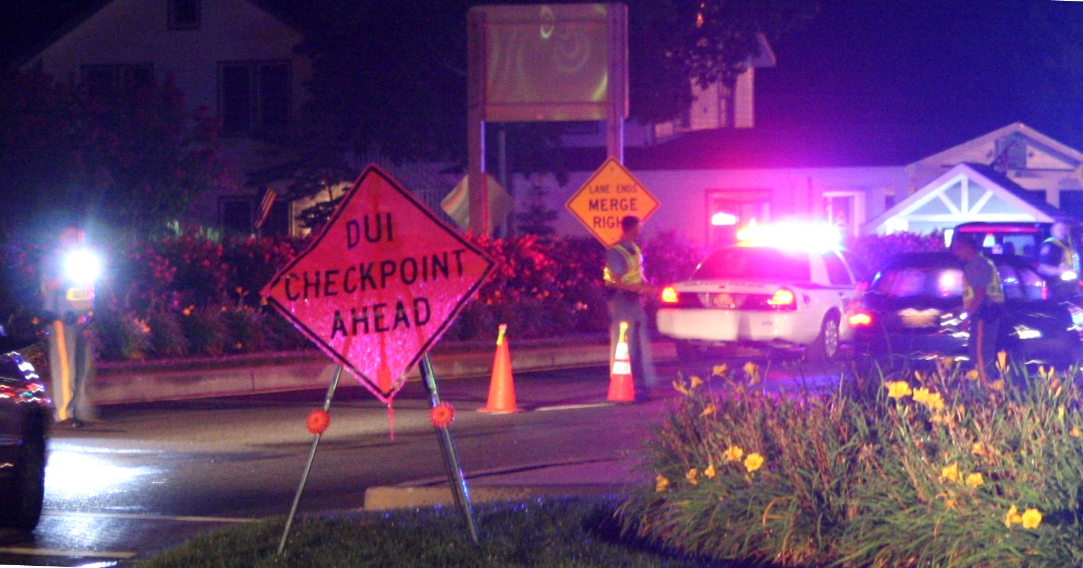 Those vehicles included these violations:

Chief Banks says the woman pictured below was arrested and charged with the following: 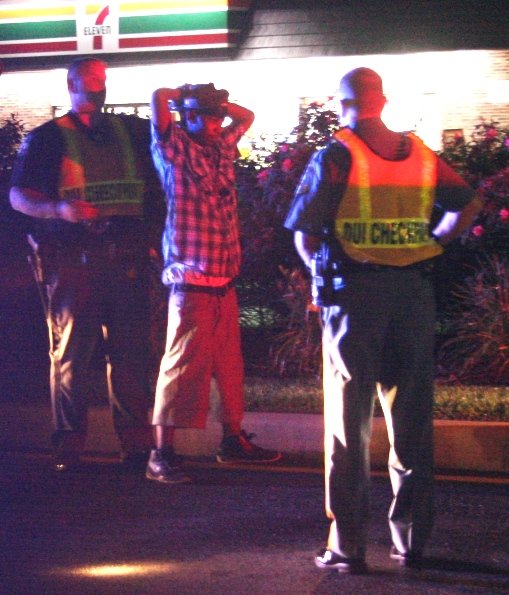 Chief Banks says DUIs are up this year, by about 12 percent. Through the end of July, Rehoboth Beach police have made 65 drunk driving arrests this year. At that same point last year they had 58 arrests. He said alcohol is a major problem in town, frequently contributing to other crimes.

This was part of Checkpoint Strikeforce and had been publicized by the Delaware Office of Highway Safety and on the WGMD Website. Also see the DUI RealTime.com Website for details on drunk driving stats.

Five suspects were involved in a robbery with shots reported fired at Route 50 and 589 around 5 p.m. Friday. The suspects fled into Ocean City on Route 50 and police searched for their stolen Chevy with Pennsylvania tags.

Minutes later, an officer spotted the car on Coastal Highway at 77th Street. The driver refused to stop and police chased the Chevy in excess of 80 m.p.h. until it crashed at 120th Street, below. 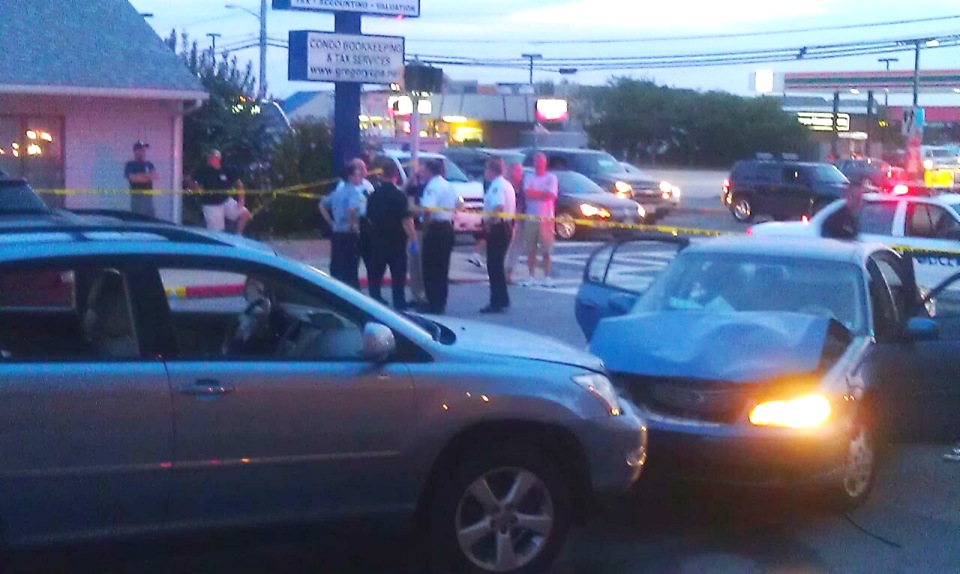 Four of the suspects were in the car and attempted to flee. Police captured all four of them. But police say a fifth suspect fled in the area of 100th Street prior to the arrest of the other four. Here is a link to the news release on the man who fled. 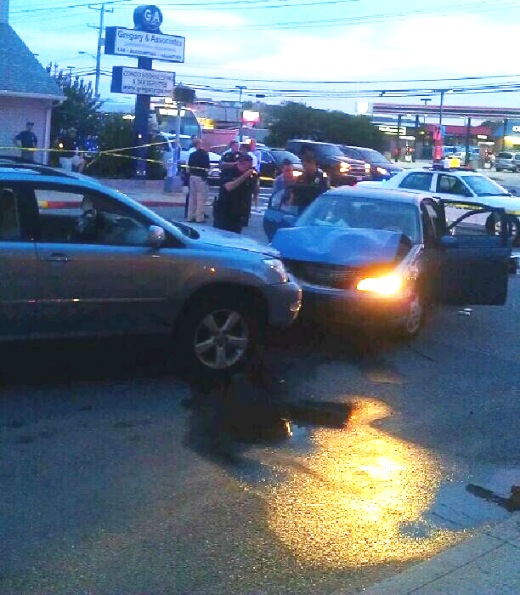 Monday morning, a piece of corrugated pipe came to shore at Rodney Avenue in Dewey Beach. This was presumably the same pipe that had been reported repeatedly floating off north Rehoboth Beach that weekend.

A spokesperson for the Army Corps of Engineers said this past week that he "refers comment to DNREC on this matter." A DNREC spokesman said "DNREC's Shoreline & Waterway Management Section recovered and removed the pipe Monday. Its origin is unknown."

The speculation has been that it was a temporary storm water outfall pipe extension installed during the recent beach replenishment project.

But both Mayor Sam Cooper and Commissioner Stan Mills say the pipe appears to be too large for any of the Rehoboth Beach outfall pipes.

"I do not have any definitive information on this section of pipe," wrote Mayor Cooper in an e-mail. "There was talk of the Corps of Engineers installing temporary extensions onto the storm water outfalls and I believe some pipe was delivered to the Deauville Beach parking lot for this purpose," he said. However, Mayor Cooper added that he "was never aware of any pipe actually being installed. Had it been installed it would have been in late spring (2 to 3 months ago) and I know that it would not have stayed in place very long. There has been no extension on the pipes since the excavator has been keeping them clean. It would be hard to believe this piece of pipe has been hanging around Rehoboth for the last 2 to 3 months."

From the picture, Mayor Cooper noted, the pipe appears to be larger than the Rehoboth outfalls. He said the largest pipe Rehoboth Beach has in service is 36 inch and this appears to be maybe 48 inch.

Suzanne Thurman, MERR Institute executive director, says the dead sea turtle brought to shore at McKean Avenue in Indian Beach last Sunday was tagged on a beach in Georgia where she had been nesting. 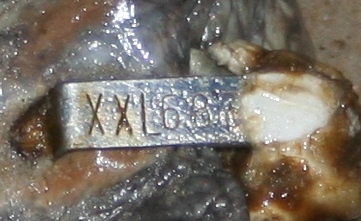 MERR has investigated 15 sea turtle deaths this year, which she says is not too unusual. She gets a tagged turtle once a year or so.

Parking was at a premium this weekend, the first weekend of August! When the Rehoboth Beach night-time code enforcement officer reported for work around 7 p.m. Saturday, all of the available parking spots behind the building & licensing offices were filled with unauthorized vehicles.

Coastal Towing removed about a half dozen illegally parked vehicles after they had been ticketed. Signs do warn that the lot is reserved for those on city business.

She discussed the importance of long-range planning, the biggest problems facing Rehoboth Beach, her concern for the city's comprehensive development plan, her experience as a health insurance executive and getting out the vote. 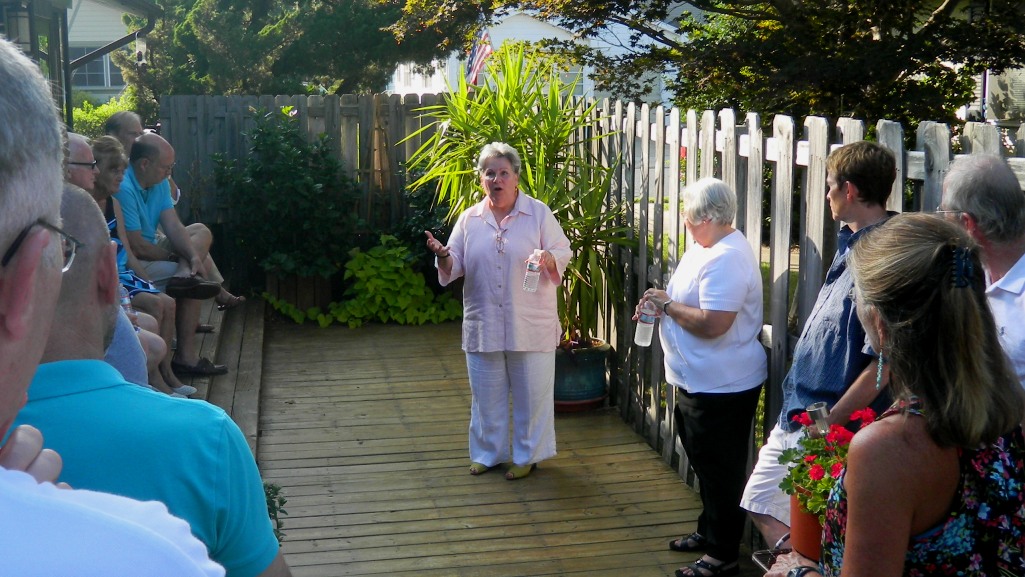 The Rehoboth Beach municipal election is this coming Saturday!

SAND CASTLE CONTEST; WHAT'S UP WITH THE SAND?

Allan, Terri and Allan Fausnaught of Landenberg, Pennsylvania were among the many winners at this weekend's sand castle contest in Rehoboth Beach. 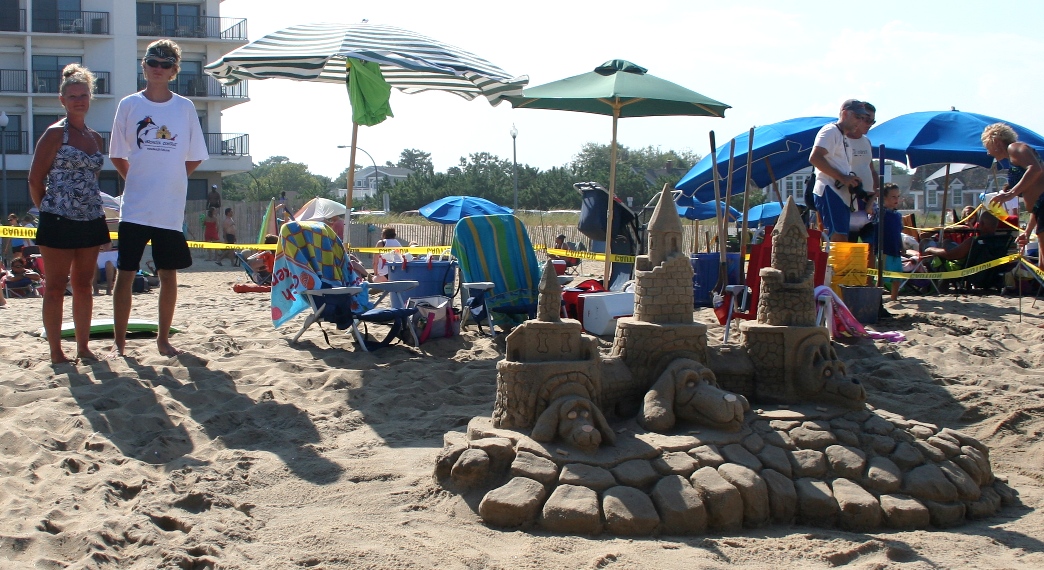 Many of the experienced sand castle builders expressed frustration with this year's sand on the replenished beach. It required much more water for building. Terri Fausnaught said many of them built close to the surf because it made it easier hauling water.

They noted that the wind was a problem, but the sand was also harder to sculpt. The sand contains more clay and impurities than in previous years, although it is mixing with the older white sand near the surf.

Here is a typical sand sample using a small sieve with about an inch of this sand from near the Henlopen Hotel. 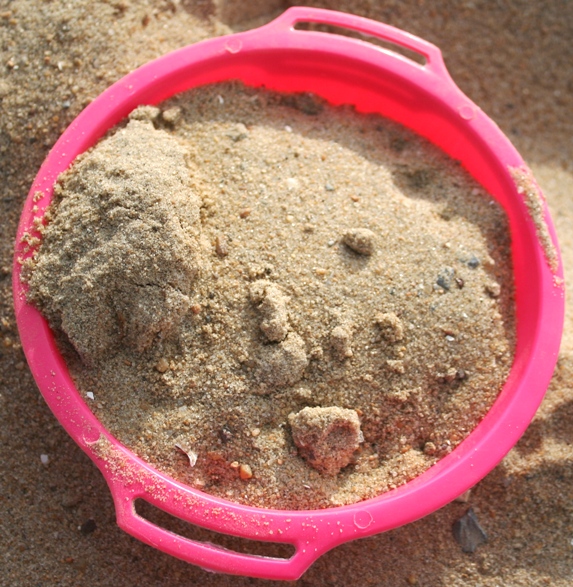 After the sand passes through, this sample contains a mix of clay chunks, what almost appears to be driveway gravel, smaller stones and shells. 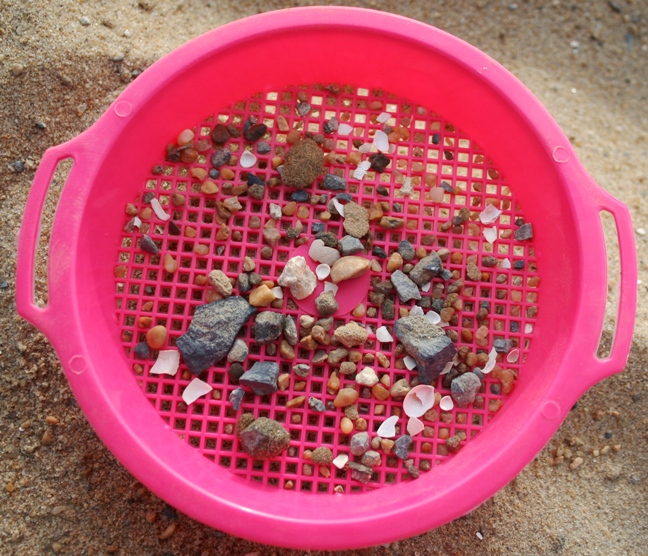 One sand castle builder said he could remember a time when the water came almost to the dunes and they lacked sand on the beach north of the Henlopen. He added that it is good to have the sand even with these problems.

The Chamber of Commerce has posted many photos of this year's sand creations here on its Website. 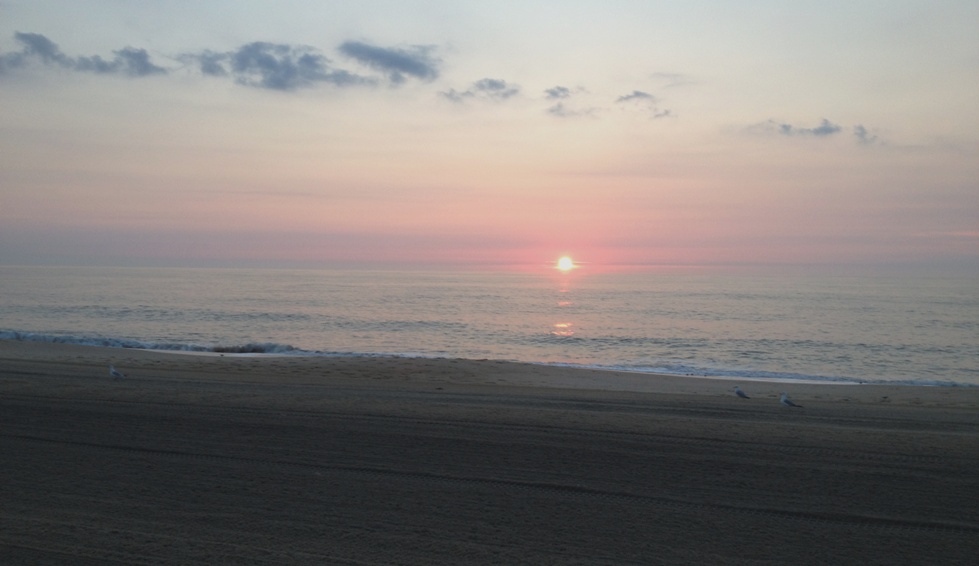 NEXT WEEK IS THE MOSAIC ART WALK!
by Dagmar Henney

Here is a sneak peak at what is being hung Sunday evening at CAMP Rehoboth. 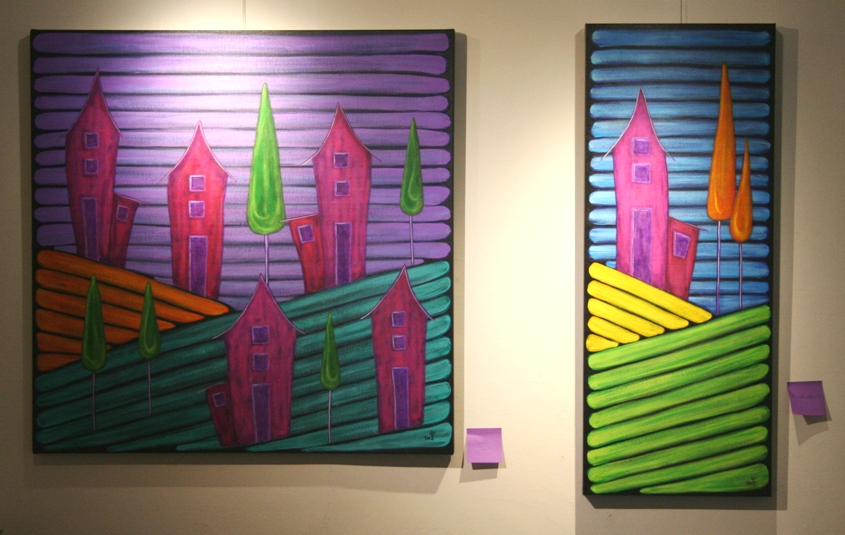 TRAVEL CHANNEL VISITS REHOBOTH/DEWEY--- A crew from the Travel Channel spent several days in Rehoboth and Dewey this past week, recognizing both town's for their recent five-star awards. The Chamber of Commerce has posted a photo show on its Facebook page.

REHOBOTH POLICE CHARGE MOM FOR ENDANGERING BOY AT FARMER'S MARKET--- Rehoboth Beach police arrested a 34-year-old mother Tuesday at the farmer's market for endangering the welfare of a child. Police Chief Keith Banks said police had a call from a citizen concerned about a six-year-old boy who was by himself in the Grove Park playground around 1:45 p.m. The boy had a rope around his neck at one point. The boy had been by himself for about 45 to 60 minutes, Chief Banks said. The mother was eventually found at the Laundromat by the Royal Farms. She was listed as "homeless" on the police report but has a Burton Village mailing address. She had a $1000 unsecured bond from Court 2 and is scheduled for family court on August 13.

NEAR DROWNING IN DELAWARE SEASHORE STATE PARK--- A man in his late 40's with a history of heart trouble swallowed a large amount of sea water when he was dragged under the water just before 11 a.m. Thursday near Tower Road. He was reportedly given two rescue breaths when on the beach and started to breathe again on his own. He was taken to Beebe Hospital.

ALCOHOL-INVOLVED JET-SKI ACCIDENTS--- DNREC marine police kept busy this weekend investigating two accidents involving personal watercraft and alcohol in Sussex County. The first was reported Friday around 6:45 p.m. near buoy #12 at Massey's. It was reported to involve a PWC on a sandbar and another boat with one minor injury. Sgt. Gregory Rhodes, DNREC spokesman, said alcohol was involved and one man faces many other charges including felonies. See photo link on WGMD's Website.

Around 3:45 p.m. Saturday, another accident involving a PWC was reported in the area of Gull Point marina in Millsboro. The patient was reported initially to be unconscious, later combative with chest pain. Another boater fled the scene. EMS personnel were going to fly the patient to a hospital but took him by ground. While headed to Beebe Hospital, the ambulance was involved in a crash at Five Points near Lewes at 4:37 p.m. This link has more details with photos on the Lewes FD Website.

OTHER WATER INCIDENTS (since Friday):

Sat. 1:35 p.m., Cape Henlopen Drive, Lewes Beach, father said his daughter was too far out on a paddleboat, making slow progress. She was safe on land when the fire department arrived.

Sun. 3:10 p.m., 3'rs Beach in Delaware Seashore State Park, two people were reported on a raft 150-200 yards off beach. Everybody was accounted for and on the beach with the raft when firefighters arrived.

Ocean City 911 calls can be tough to track