Having trouble viewing this report or its photos? Click here: http://henney.com/weekend12/

A seasonal police officer on patrol received a tip around 3:05 a.m. Sunday that two men had broken into the Rehoboth Toy & Kite Company on Virginia Avenue.

A third man supposedly stood guard while the other two searched the store which has occupied the ground floor of the Virginia One Condo for the past 19 seasons.

At least one Dewey Beach police officer came to town to assist Rehoboth Beach officers, as the police closed in on the suspects. They captured the men.

One of the men started showing signs of trouble breathing and was reported by EMS personnel as briefly unresponsive. He was taken to Beebe Hospital in police custody.

Bee Linzey, owner of the shop, says it appears one of his employees may have forgotten to lock the door properly, and the suspects were apparently walking along the boardwalk checking for unlocked doors. Linzey says there was no damage.

Both men were arrested inside the store by police. They were in possession of cash removed from a safe and merchandise. Police say both men entered the store through an unsecured door.

Both suspects were intoxicated and have been charged with 3rd-degree burglary, 2nd-degree conspiracy, theft under $1500 and criminal mischief under $1000. They have been committed to Sussex Correctional Institution in default of $7000 cash bail. 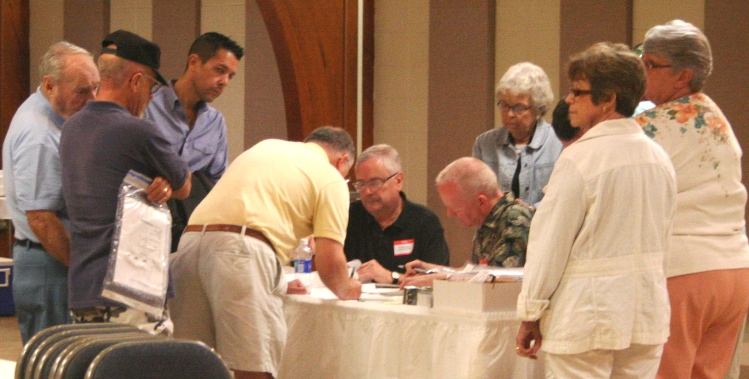 Of those voting for mayor, Tom McGlone took 42 percent of the vote, while Mayor Sam Cooper had 58 percent.

McGlone was Mayor Cooper's fifth challenger and many wonder how well he did compared with previous mayoral challengers.

During the 2008 election, Paul Kuhns took 44 percent compared to Mayor Cooper's 56 percent. Kuhns was a commissioner when he ran for mayor.

Incumbent Commissioner Lorraine Zellers and Mark Hunker were the winners of the two commissioner seats.

Wayne Steele, election inspector, made the announcement at 6:23 p.m. 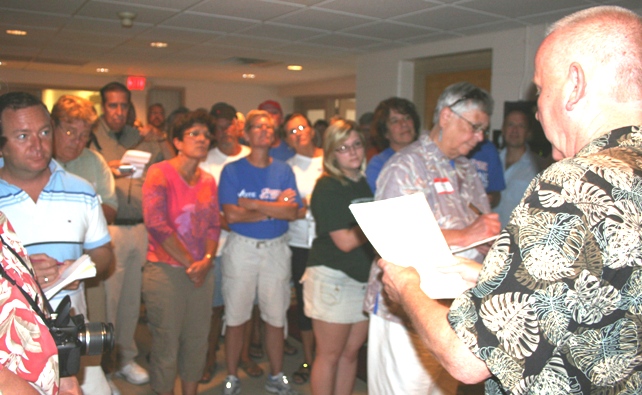 Here are the 2011 election totals:

Several people voting or working the polls at city hall Saturday witnessed a police incident in the parking lot.

Around 2 p.m. officers were summoned to the Convention Center parking lot for a man reportedly beating a woman.

But police also arrested Thomas for DUI, reckless driving and unsafe backing as a result of her involvement in a fender-bender while attempting to leave the parking lot. Police had her sit on the ground next to the Nissan Altima, shown below, while they investigated. 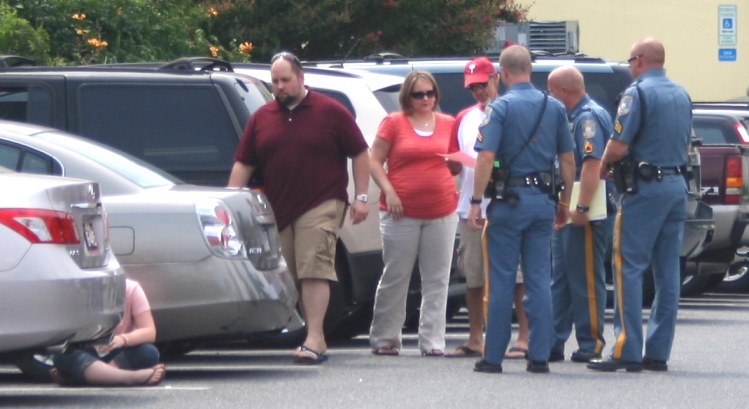 Police say Thomas was released from the police department to a sober cosigner after being issued traffic summonses. Paone was committed to Sussex Correctional Institution in lieu of $1500 secured bail.

This time it happened in the ocean block of Rehoboth Avenue north of the bandstand around 8:30 p.m. Friday.

The on-call public works crew went for a grabbing tool, but there was some vigilantism. While most of the bystanders were too large to squeeze into the storm drain, they found a young skinny volunteer to drop into the drain. 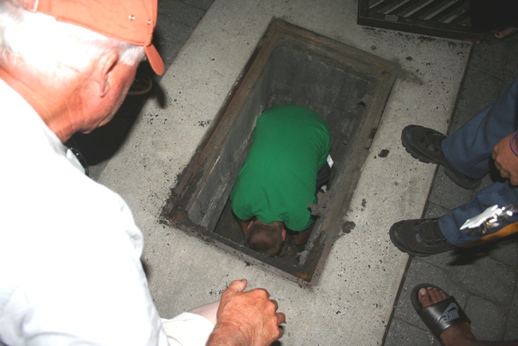 It took even him several tries to kneel into the pit and recover the missing items. With a seasonal police officer holding a flashlight, the mission was a success. 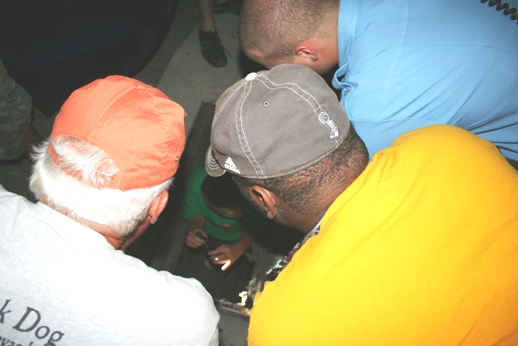 Afterwards, they slid the grate back in place and the mission was completed!

Even Rehoboth Beach is not immune from trying to determine what to do with diplomats who park illegally.

Just before 5 p.m. Saturday, police received a report from Grotto's that this black Suzuki Forenza with diplomat tags was illegally parked in the lot used by the Grotto delivery vehicles on Wilmington Avenue.

Since the lot is privately owned, the city does not tow vehicles from it. The property owner or leaseholder must take the responsibility for vehicle removal.

But officers waited for a full-time officer for guidance.

DSF is a diplomat tag issued to Czech Republic. See this Wikipedia page for the entire list.

Fire companies from Rehoboth Beach, Milton and Indian River assisted Lewes firefighters when fire broke out in this house around 6:30 p.m. Friday at 34083 Treadwell Circle in Harts Landing. 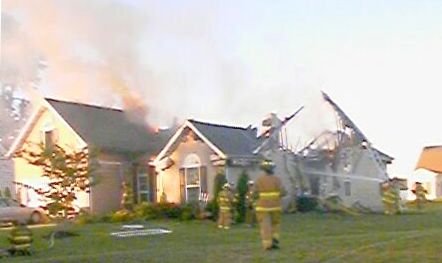 A 78-year-old man suffered injuries during the fire, including singed hair on his head, nose, soot in his mouth and minor 1st-degree burns to his chest. He was taken to Beebe Hospital. 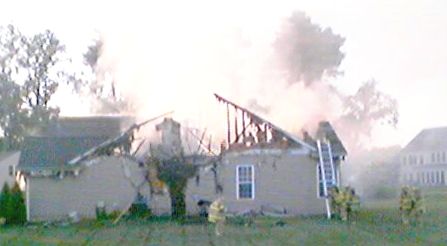 The famous Cape Henlopen breakwater lighthouse is getting repairs, but the organization that is trying to preserve the site, the Delaware River & Bay Lighthouse Foundation, is in need of assistance. 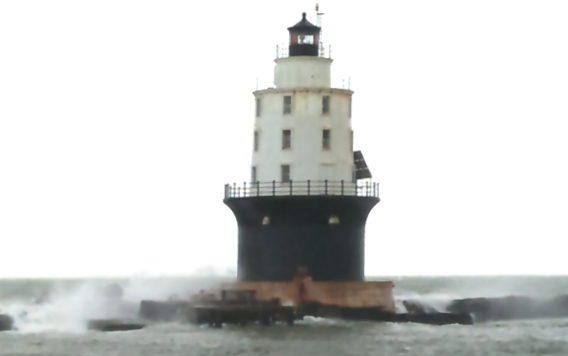 Lois "Charlie" Podedworny, a foundation board director, says they have worked hard to preserve the Harbor of Refuge Lighthouse. But the wall has been washed away by the big nor'easters.

She says they are still doing fundraising for the dock repair/rebuild and hope to incorporate it with the work the Army Corps of Engineers is performing.

The foundation's next goal, Podedworny says, is to replace the dock. Without a functional dock, they are unable to perform repairs to the light and unable to take tours to the lighthouse. She says they hope it can be included with the wall repair. 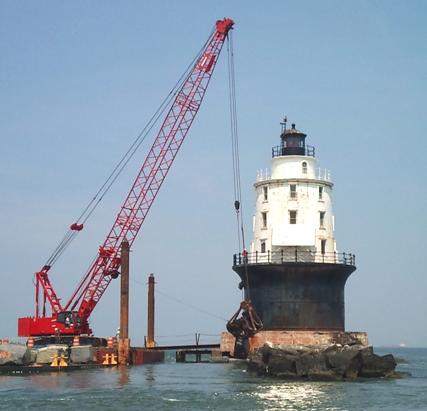 It was purportedly the longest vessel ever reefed in the Atlantic. Officials sank the former Navy destroyer Radford around 3:30 p.m. Wednesday, about 29 miles due east of South Bethany.

Extensive details and lots of photos of the ship's sinking are on the DNREC Website and WGMD Website.

FISHER AND WEBER, SPECTACULAR DUAL-EXHIBITION AT THE MORTON GALLERY
by Dagmar Henney

Both artists will catch your attention. 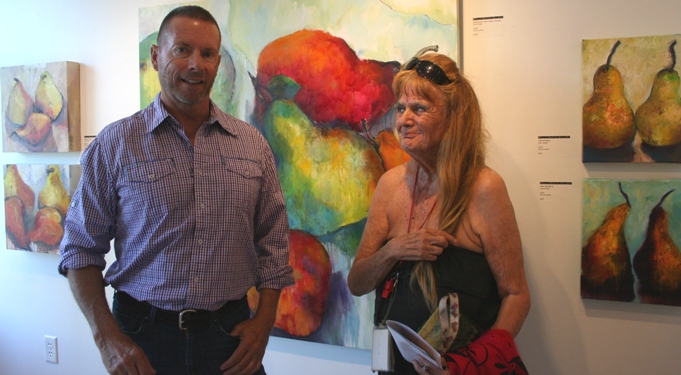 Gary Fisher, Justice Department lawyer, turned outstanding artist, has his exhibition at Rehoboth's delightful Morton Gallery! We have known him and his unique colorful art for some time. His attractive art is shown in the Corcoran, various embassies, and other significant places too numerous to mention. He was also selected by the State Department for his art, as well as his legal acumen.

Entering the gallery one is immediately stricken by his brilliant display of color. Just look at his delicious pears. Pears, pears and more pears -- but where are the sunflowers -- Gary? We loved them in your work "Sunflowers and Pears."

His work is admirable, and his fruit is delicious to admire. His landscapes are enchanting. I am in love with his various styles, especially his "sunflowers and pears."

Keep painting Gary, you are awesome.

Michael Weber - Weber's work is attractive -- often even -- sober. He makes one think and wonder.

Michael's "Ancestor work" was admired by many.

Good work Mike! Weber, who pronounces his name WEBBER, is not related to the German composer, Karl Maria von Weber, another famous artist!

We always look forward to the next informative exhibition at the delightful Morton Gallery, featuring the best of American artists – we vividly remember the Morton Gallery introducing us to Dane Tilghman, Anita Peghini Räber and other notable artists! Well done Eric and company. 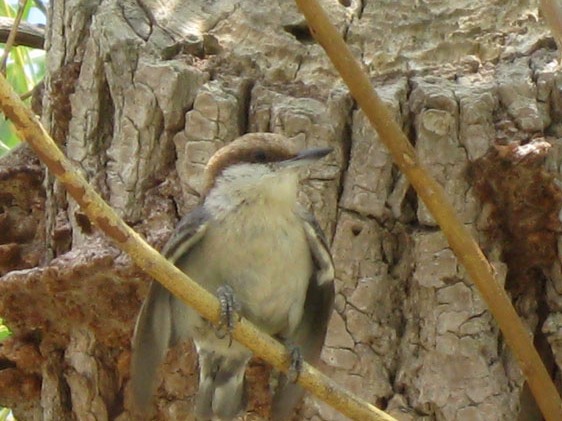 Commissioner Mills said he took them in mid-June while walking around Lake Gerar when he spotted a male and female cleaning out a hollow in a tree for a nest. "Chicks were seen sitting on branches nearby about a month later," he adds. "Two other nuthatch species seen in the area are the white-breasted nuthatch and the more prevalent red-breasted nuthatch. Nuthatches can be easy to identify by how they go down trees headfirst!" 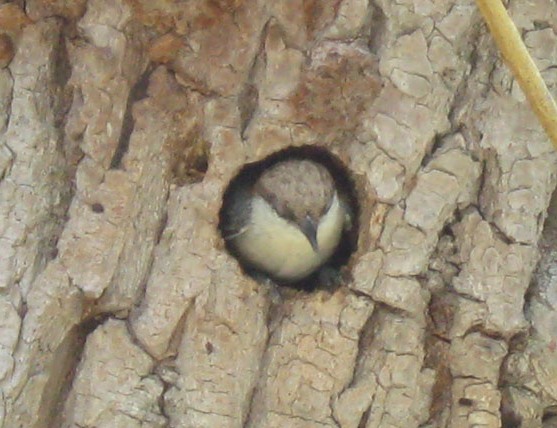 MAN DIES DAYS AFTER GETTING STRUCK BY WAVE--- An 86-year-old man was struck in the back by a wave around 1:35 p.m. Wednesday at 34th Street in Ocean City. Beach Patrol Capt. Butch Arbin says the man was knocked to the ground and suffered severe spinal-cord trauma. His adult grandson came to his aid and found him face down, rolling in the surf.

They pulled him to the beach and started rescue breathing. The man was taken to the hospital by ambulance. Capt. Arbin said they were unable to fly him because he was unstable. The family eventually removed him from life support, and he later died. Capt. Arbin said the family sent the beach patrol a note of appreciation, adding that the doctors were surprised he survived as long as he did, probably because of their rescue efforts.

WOMAN REVIVED AFTER CARDIAC ARREST IN GYM--- A woman at Club Fitness in the Rehoboth Mall collapsed in cardiac arrest around 4:45 p.m. Saturday. According to EMS reports, she was using the treadmill when she suddenly fell to the floor. Bystanders started CPR immediately. A paramedic shocked her with a defibrillator, and within a couple minutes, she regained a pulse. A similar success happened at a gym outside Lewes last month.

BANNER PLANE LOOSES ITS TOW--- A Bethany Beach police officer watch as a banner snapped from the plane around 4:25 p.m. Saturday. The officer even recovered the banner, in Bethany Meadows, which he described as in "not very good shape."

BROOKLYN AVE VANDALISM--- Police are investigating an incident where two big flower pots were discovered thrown against a vehicle in the ocean block of Brooklyn Avenue in Rehoboth Beach around 1:35 a.m. Sunday.

NUDE MAN CLAIMS HE WAS LOOKING FOR HIS SHORTS--- A woman called Ocean City police early Friday after she was confronted by a nude man on the beach. The police dispatcher said the woman told them the nude man approached her as she walked her dog around 12:45 a.m. He asked if she 'saw any shorts on the beach.' And that is when she called police.

When stingrays strike, head to the hospital