Having trouble viewing this report or its photos? Click here: http://henney.com/weekend12/ or e-mail alanhenney@aim.com

REHOBOTH GETS FIRST SWIMMING ADVISORY IN YEARS
Army gets the blame; city had used chlorine product 2 weeks ago to avoid potential problem

The dreaded swimming advisory sign was mounted on the Rehoboth Avenue lifeguard stand Thursday afternoon to warn visitors that an ocean water test reading was high for bacteria. It was removed Friday afternoon after DNREC said a second test sample taken Thursday afternoon had passed. 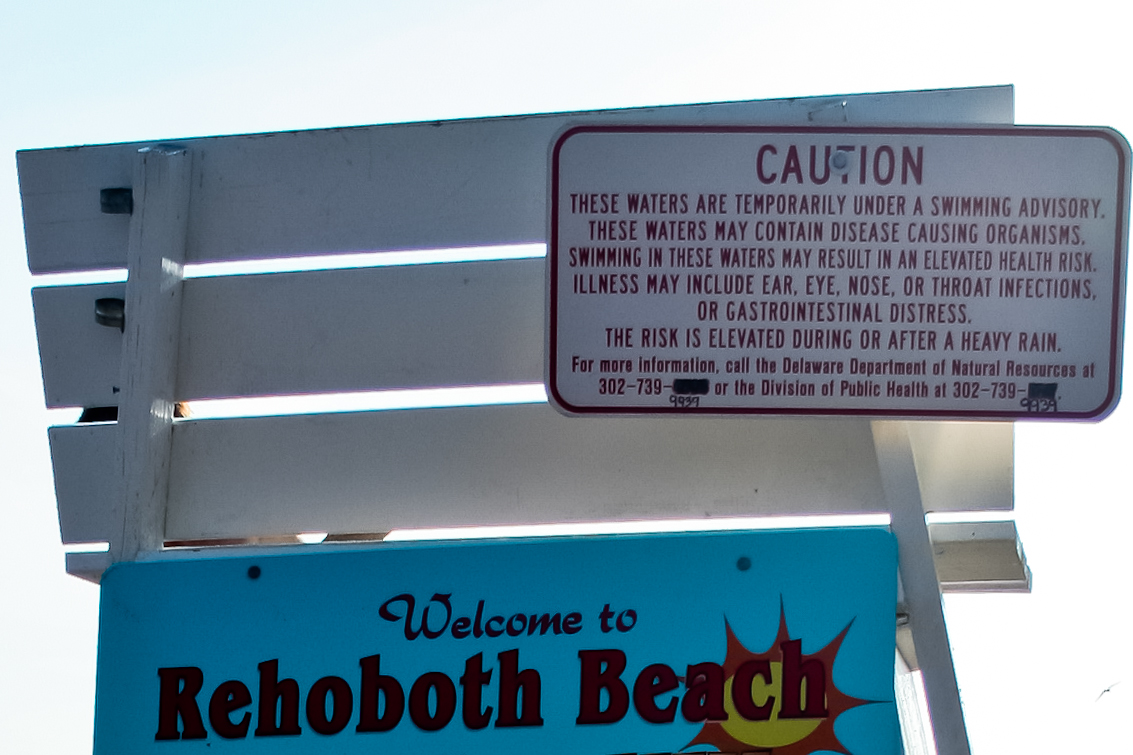 "Since EPA began funding recreational water quality sampling in 2000," says Michael Globetti, DNREC spokesman, "there has not been an advisory issued for Rehoboth Beach. The advisory is directly related, as you discerned from DNREC's Recreational Water Quality website, to the outfall pipe's backup being cleaned out by the USACOE [U.S. Army Corps of Engineers]."

After having had the beach replenished during the winter, officials have had a challenging summer dealing with almost daily stoppages of the storm-water outfall pipes because of the wider beach. Through a network of pipes, storm water in Rehoboth Beach drains to the lakes, canal and ocean.

The U.S. Army Corps of Engineers has been on the beach almost on a daily basis using a leased excavating machine to clear the ocean outfall drains, typically during low tide. While there are several outfall pipes along the beach, three outfalls in particular, Rehoboth Avenue, Delaware Avenue and Laurel Street, have required almost daily maintenance to keep them flowing.

This is the outfall pipe on Rehoboth Avenue, after the caution sign was posted Thursday. The outfall pipe was once again almost completely buried in sand, although it continued to drain some water into the surf. It was suspected of giving the high bacteria reading after it had been cleared by the Army Corps of Engineers. 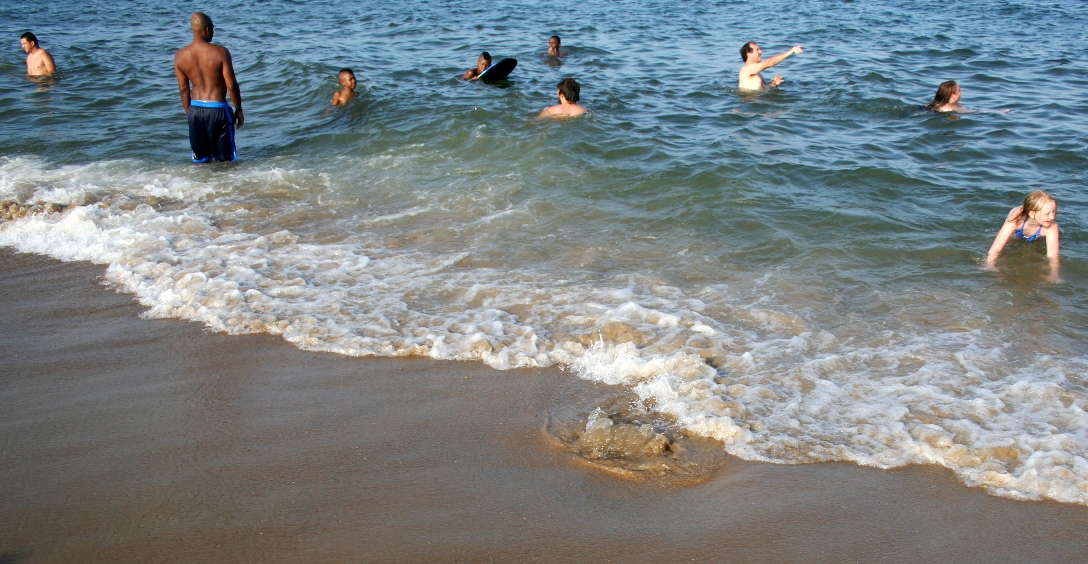 "We have been clearing the outfalls all summer," writes Steve Rochette, Army Corps of Engineers spokesman. "It's possible with the hot weather and water remaining in pipes (until they are cleared at low tides) that it could contribute to the elevated levels mentioned, although it would dilute quickly," he said.

"Our project manager has been in discussion with DNREC on the water testing program and suggested treating the pipes from the street level," Rochette added.

At least one time, two Fridays ago, city public works personnel were observed pouring a chlorine product, typically used in swimming pools, into the storm drains near these three storm-water outfalls. The majority of the product's active ingredient is Sodium dichloro-s-triazinetrione which includes a granular and stable form of chlorine.

This same drain on Delaware Avenue was reported clogged around 3:50 p.m. after Friday's rain storm. Rehoboth Beach had seven-tenths of an inch of rain fall on Friday. 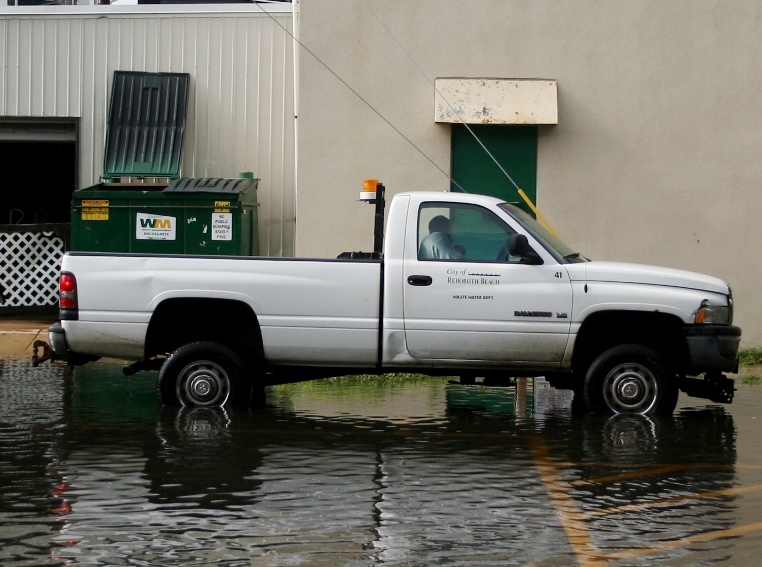 The city's waste water department came, but determined that the Army Corps of Engineers was needed. Water had risen almost to the sidewalk. 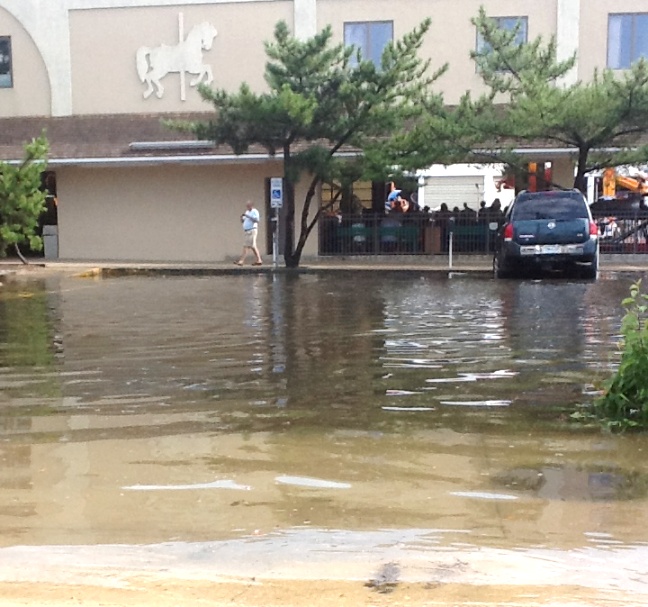 "The City has a history of good ocean water quality as attested by years of positive water test sampling and by the recent five-star ratings issued by the NRDC the past two years," says Commissioner Stan Mills. "Unfortunately, this beach advisory appeared to stem directly from a clogged outfall pipe resultant from an overabundance of sands replenished during the beach nourishment project. We are awaiting the sands at the water's edge to slough off enough so that the outfall ends remain exposed thereby keeping the pipe ends open without the need for mechanical assistance. Open pipes let the runoff flow at all times eliminating stagnation. This highlights the need for continual cleaning around the outfall ends by the USACE. Fortunately the advisory was of very short duration," Commissioner Mills noted.

Elsewhere in town, water had been causing troubles this past week. Here is a photo from a resident of south Rehoboth showing the street flooding after the city received more than an inch of rain Wednesday morning on Laurel Street. 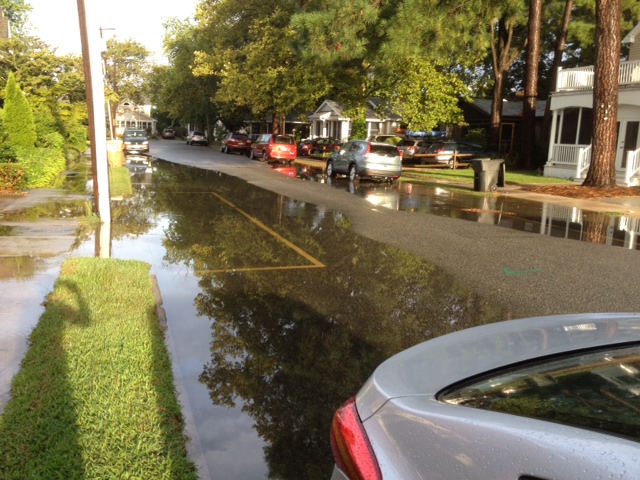 AND THE WINNERS ARE...
Incumbent Rehoboth Beach Commissioners Gossett, Sargent retain their seats 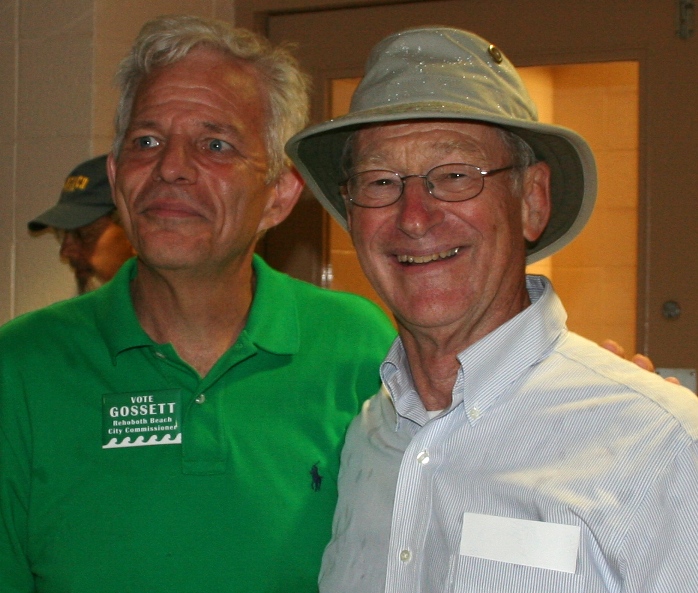 The Rehoboth Beach municipal election season came to an end when the polls closed at 6 p.m. Saturday. At 6:12 p.m., Wayne Steele, election inspector, made it official. 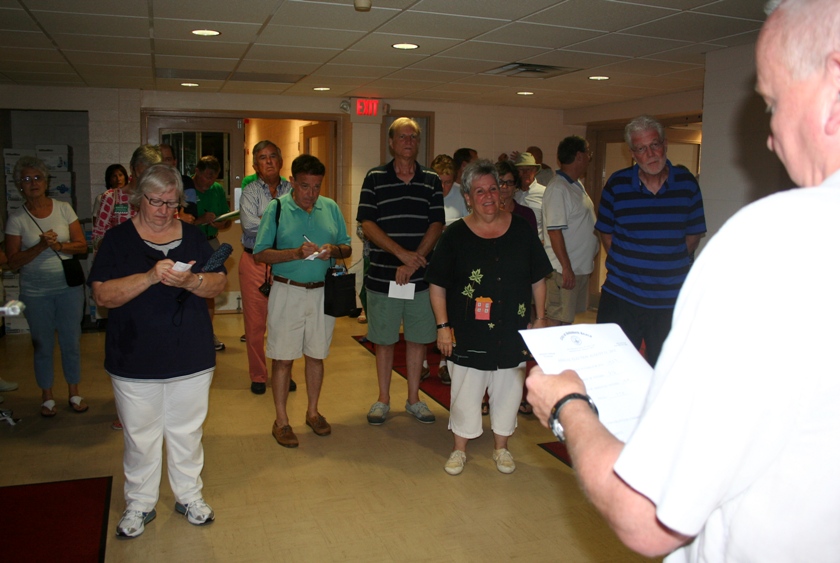 Here are the 2012 election totals:

Click here to view a copy of the actual document Wayne Steele holds.

According to one witness, lightning touched down in south Rehoboth Beach at 7:34 a.m. Wednesday. At 8:10 a.m., smoke was reported coming from this ocean-front house at the edge of the city's southern border. Firefighters arrived minutes later. 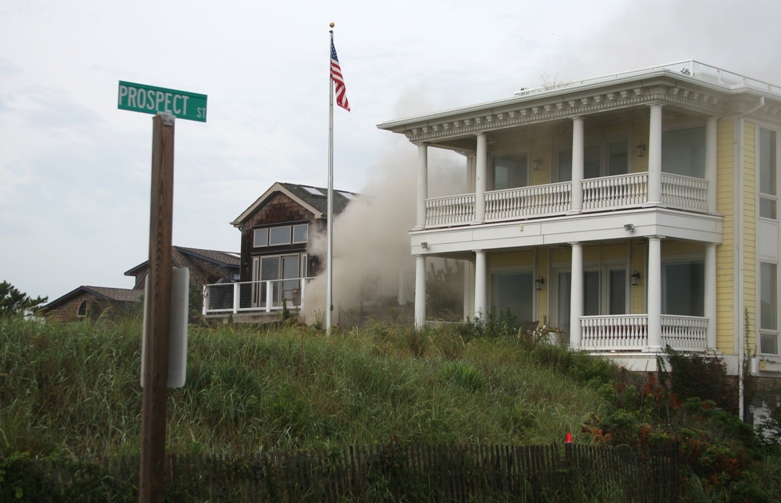 Investigators from the Delaware State Fire Marshal's Office said the fire originated in the utility storage room and was caused by a lightning strike. 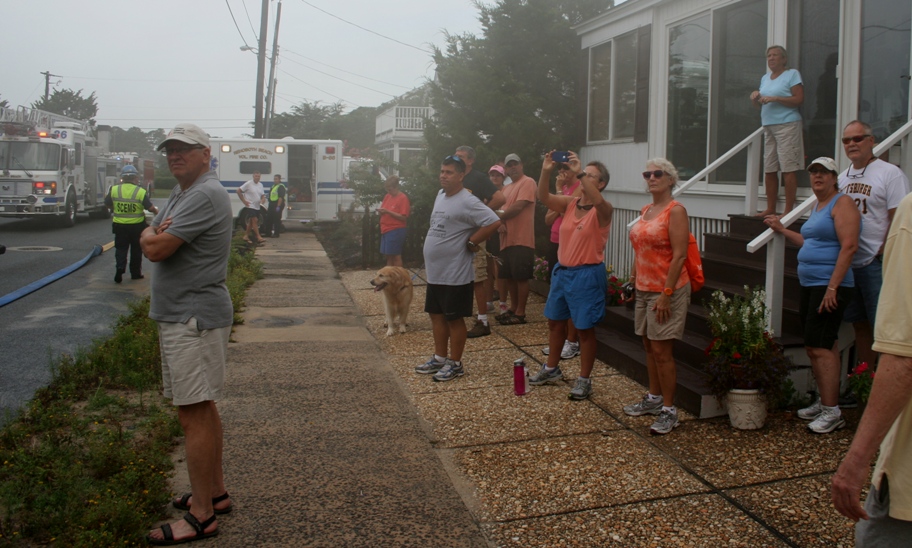 Firefighters departed just before 11:40 a.m., only to be called to return about 30 minutes later when the fire rekindled. 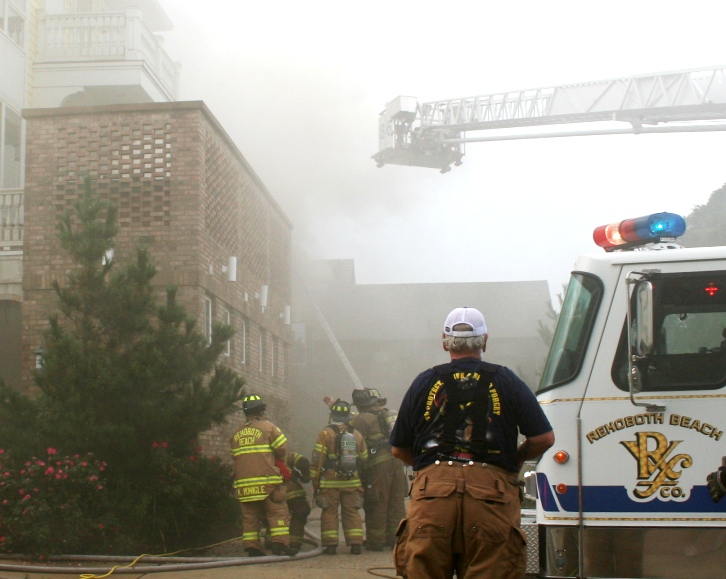 The house was not occupied at the time of the fire. No injuries were reported. Damages have been estimated at $600,000.

A Rehoboth Beach parking enforcement ticket writer made the call for help around 1:20 p.m. Sunday when a fight erupted over a parking space in the ocean block of Baltimore Avenue. These two women admitted to saving the parking space using a cooler and their own bodies, which is actually prohibited in town. They said other motorists seeking parking had no problem with this. But eventually the man drove up in his car and insisted they were not allowed to save the parking space without a car.

They claimed he drove at them and forced his way into the parking space. 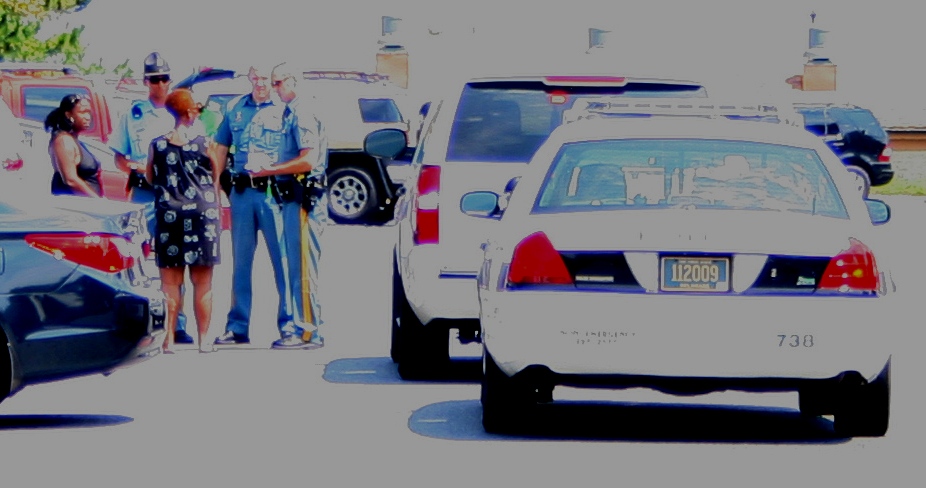 Police arrived, put the man into a police car. The man eventually was released and removed his car from the parking spot to allow the women to park there. He departed. The women said they thought the police would issue him a citation.

HAVE YOU SEEN A TRAIL OF BROKEN GLASS ON CITY STREETS?

Contacted Thursday by phone and e-mail seeking comment, First State Disposal replied by e-mail "I have passed this information on to our Supervisor. As soon as he has a chance, we will get back to you."

If you spot piles of broken glass, please take a photo and send it along with the date and location.

Joanne DeFiore with her grandson, Brian Allen, signed copies of their new pop-up book, "A Day in Rehoboth Beach," at Browseabout Books on Friday.

Brian's brother, Keith Allen, is a graphic artist for American Greeting Cards. He wanted the experience of making such a book. Joanne wrote the text. Brian drew the illustrations and Keith designed the pop-ups. Keith was unable to attend on Friday. 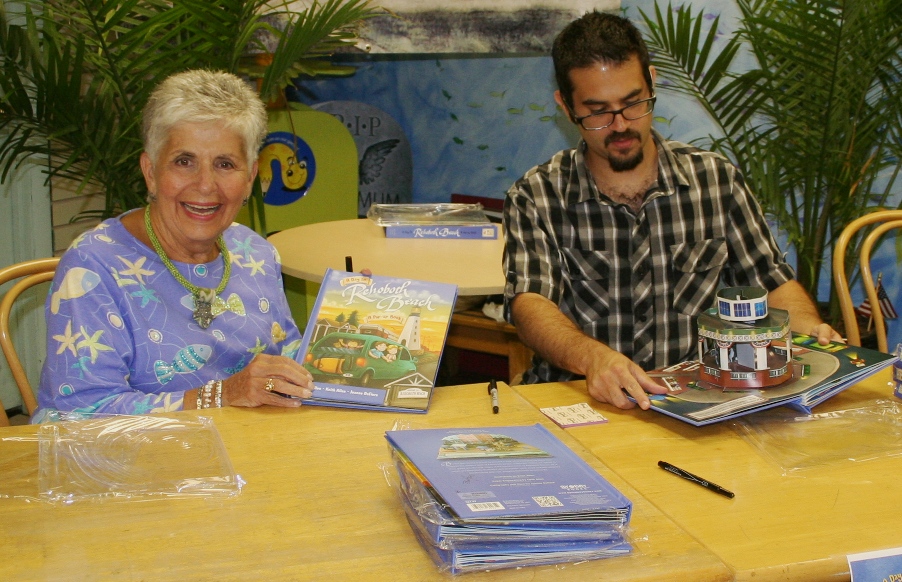 The book is on display and for sale throughout Rehoboth Beach. Also check the video and details on their Website and order online!

Even the Rehoboth Beach ambulance does it while returning to the firehouse! 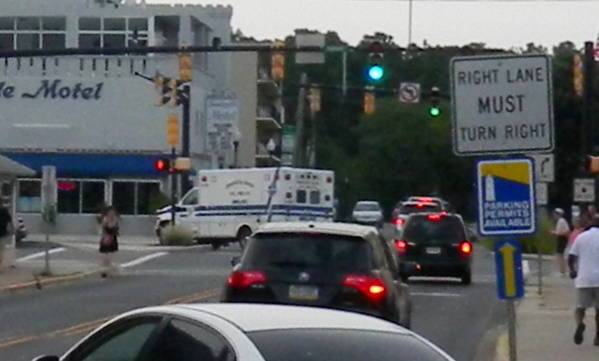 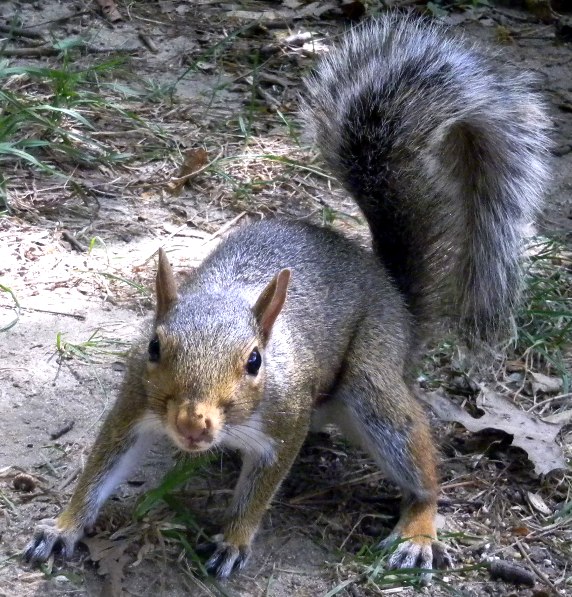 Click here to read more about the eastern gray squirrel.

SORRY TO HAVE MISSED YOU ON THE ART WALK!
by Dagmar Henney

I have been weak, suffering from another UTI. Hope to return next week. Thanks friends for your support!

2 INJURED BY STINGRAYS IN PAST WEEK--- A 75-year-old man was injured after a reported stingray incident near Indian River Inlet. It was reported around 11:25 a.m. Monday about 100 yards north of the inlet on the beach. Robert Stuart, Sussex County EMS director, says the man suffered a minor chest injury and was taken to Beebe Hospital with a paramedic as a precaution. A DNREC spokesman said DNREC would not comment or provide a photo taken of the ray.

Just before 10 a.m. Sunday, Ocean City EMS personnel responded to assist Ocean City Beach Patrol at 134th Street where a 40-year-old man had reportedly been stung in the arm by a ray. He was reported as semi-conscious and was taken to Atlantic General Hospital.

TODDLER STRUCK, DRAGGED BY VEHICLE--- A two-year-old boy was injured Saturday after he was struck and dragged by a vehicle moving approximately 10 m.p.h. It happened around 2:15 p.m. at 29380 White Street in the Millsboro area. The boy suffered multiple cuts to the back of his head, forehead, elbow and knees. But he never lost consciousness and had no obvious broken or dislocated bones. He was taken by ambulance to Beebe Hospital.

NEAR-DROWNING OF A BOY AT MOTEL OUTSIDE LEWES--- An eight-year-old boy was submerged in the pool at the Heritage Inn on Postal Lane for an unknown period of time around 5 p.m. Thursday. When he was pulled from the pull, he was reportedly not breathing and bystanders performed CPR. He started breathing on his own and was conscious when taken to Beebe Hospital.

SERIOUS BIKE ACCIDENT ALONG COASTAL HIGHWAY--- A male bicyclist suffered an open tibia-fibula fracture when he was involved in an accident with a vehicle around 12:15 a.m. Friday at the Creekwood Development. He was taken to Beebe Hospital.

MYSTERY GAS ODOR IN DEWEY--- Rehoboth Beach firefighters and the Dewey Beach Patrol attempted to locate the source of a gas odor after receiving calls around 12:30 p.m. Tuesday. The initial reports came from McKinley Avenue and Chicago Street. The beach patrol later reported that the odor was found from Silver Lake all the way south, covering every Dewey Beach street. The wind was blowing from the south-southeast and they speculated it could have been released from a ship.

ACCIDENTS TWO DAYS IN A ROW IN FRONT OF LEWES HOME DEPOT--- Traffic on southbound Coastal Highway came to a standstill after a two-vehicle accident near Home Depot around 12:50 p.m. Sunday. One vehicle was reported on its side but was righted by bystanders. A 37-year-old woman suffered a wrist injury and the 68-year-old man in the vehicle on its side sustained minor injuries as well. Both were taken to Beebe Hospital. Lewes FD posted photos on its Website. Lewes firefighters also responded to another crash in front of Home Depot on Saturday.

Sat. 8:20 p.m., 240 Bayshore Drive in South Bethany, two boys reportedly left around 7 p.m. with a kayak. They were described as being unfamiliar with the area. Bethany Beach firefighters and DNREC marine police responded. The boys were safely located about 10 minutes later.

Sun. 5:30 a.m., Ingram Pond, Millsboro. The body of a 68-year-old man was discovered in a submerged vehicle. The police say it was a suspected suicide. See the WGMD Website for details.

Southern Delaware featured in "Where to Retire Magazine"

Dewey wins round in Ruddertowne case