AND THE WINNERS ARE...

The Rehoboth Beach 2014 campaign season came to an end Saturday when the polls closed at 6 p.m. and Wayne Steele, election inspector, read the results at 6:13 p.m. 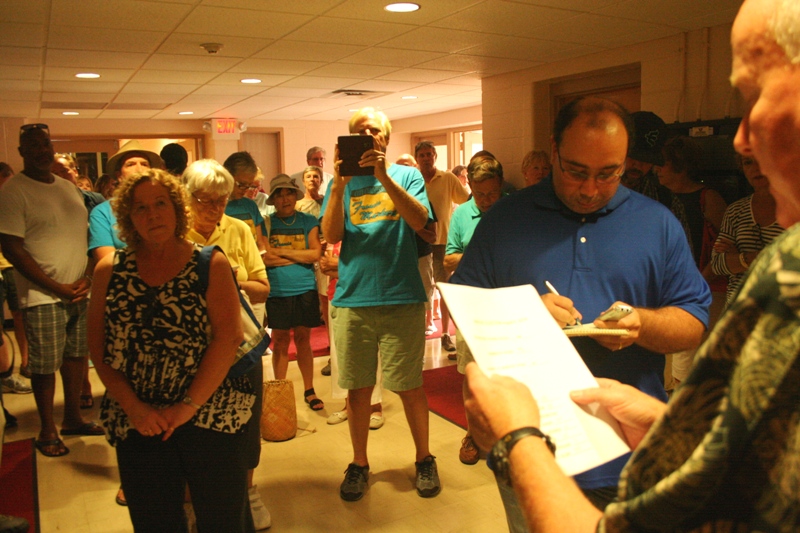 Mayor Samuel Cooper has won another term in office, his ninth.

Listen to Mayor Cooper who spoke with WGMD's Jon Budler Sunday morning about his win and the future of the city.

The candidates winning the two commissioner seats are incumbent Commissioner Lorraine Zellers, on the left, who has been serving as a commissioner since 2008, and Kathy McGuiness, a previous city commissioner for 12 years, who will be returning for yet another term. 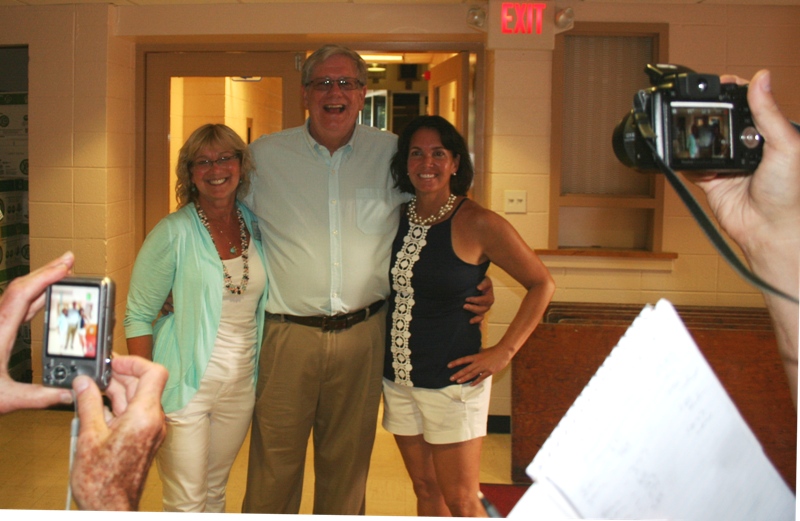 Mayor Cooper has proven to be an invincible opponent. He has faced mayoral challengers six times and won every time.

Tom McGlone was the only candidate to challenge Mayor Cooper twice. McGlone lost by 30 percent, more than in 2011.

These are the 2014 election totals (click here for the actual page Steele holds in his hands):

According to data obtained from the Office of the State Fire Marshal, the alcohol establishment with the highest occupant limit in Dewey and Rehoboth is the Rusty Rudder which is permitted to have up to 1615 occupants. 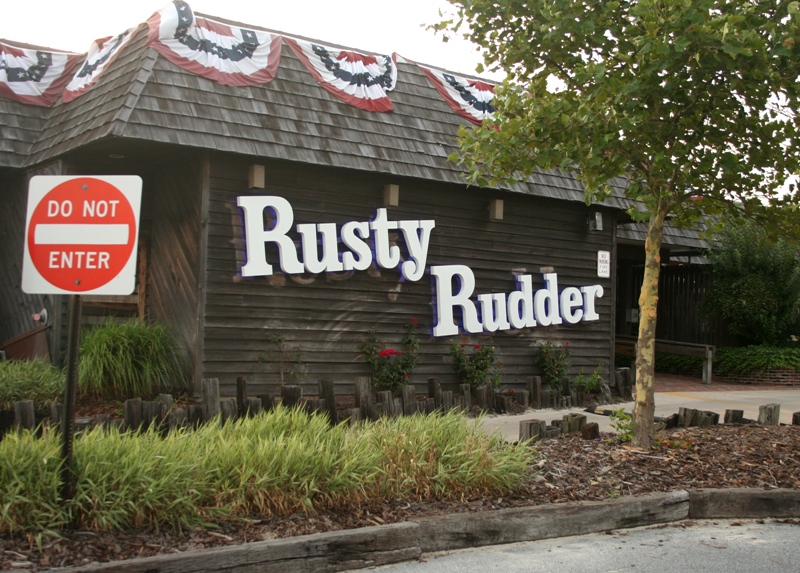 In second and third place are Northbeach and the Crabbers Cove with 937 and 813, respectively.

The photo below was taken inside the Bottle & Cork on Memorial Day Weekend 2012. The Cork is in fourth place with a maximum occupancy of 792 people. 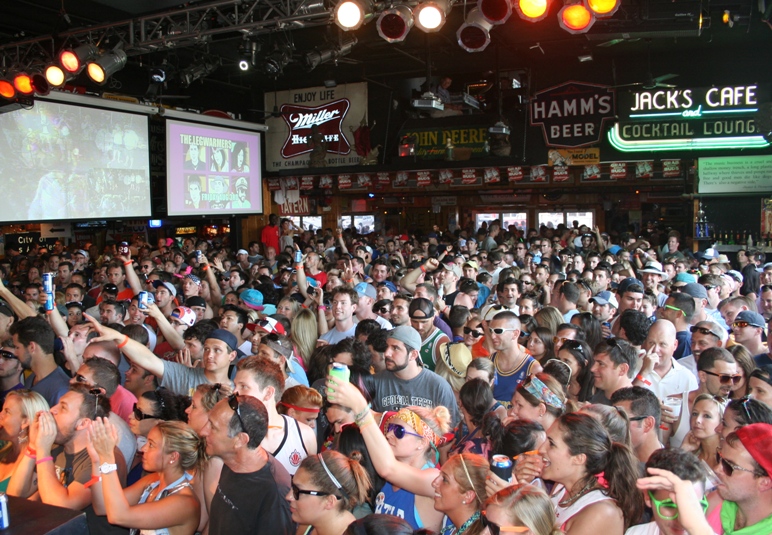 The alcohol establishment with the highest occupant limit in Rehoboth Beach is Aqua Grill with 337 people.

This PDF file has the entire list of those establishments licensed to serve alcohol in the Town of Dewey Beach and the City of Rehoboth Beach. This does not include businesses which are licensed outside of the limits of either jurisdiction.

Michael Chionchio, assistant state fire marshal, says occupant limits are calculated using the National Fire Protection Association (NFPA) Life Safety Code which has been adopted for use by the state fire prevention regulations. He notes that occupant limits are set by the physical features in a building such as fire protection devices, square footage, number of exits, capacity of exits, travel distances, etc. But he adds, "The owner of the property is ultimately responsible for his/her business and the safety of their patrons while the business is open."

Smaller establishments are classified as "mercantile" and are not subject to the annual public assembly license program because their occupancy is less than 50 persons. As the restaurants change floor plans and other features, so do occupant limits.

Atlantic Refrigeration is a 2013 Better Business Bureau Torch Award Winner! For all your heating and cooling needs, please click here ...

Rehoboth Beach police made a quick arrest after an intoxicated female driver did not initially stop for officers on Rehoboth Avenue.

Police had received a tip that the driver of a blue Dodge Neon could be intoxicated and had left the scene of two fender-benders on Second Street and was headed for the Sandcastle Hotel around 3:14 p.m. Tuesday.

In less than a minute of receiving the report, Rehoboth Beach police were behind her car.

She headed through the intersection at Second Street and turned east on Rehoboth Avenue. That is when Lt. William L. Sullivan said he "responded from the parking lot of the PD after hearing the BOLO [be on the lookout] from dispatch."

Lt. Sullivan said he spotted the Dodge on Rehoboth Avenue headed west after the reporting person driving a Jeep pointed out the car after it made a u-turn just east of Rehoboth Avenue and Second Street.

"I initially had the vehicle stopped at Rehoboth Avenue and Second Street traveling west bound," he says. But, after the red light changed to green, the woman continued driving west on Rehoboth Avenue and eventually stopped in front of the fire department.

Officers checked the vehicles in the area where the reporting person said there were vehicles struck, but no damage was found. It appears that the woman just missed several parked vehicles while she was driving north on Bayard Avenue, Lt. Sullivan says.

A police news release identified the driver as Erika L. Ludwig, 25, of Millsboro. This is her third DUI arrest. 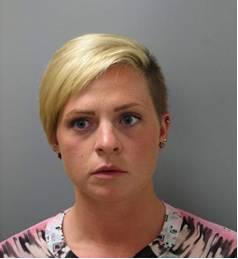 She faces charges of DUI (3rd offense), failure to maintain lane, no registration in possession and no proof of insurance.

Ludwig was released to a relative on a $3,525 unsecured bond and is scheduled for a preliminary hearing in the Court of Common Pleas on August 14.

Anyone with additional information on this incident is asked to contact M/Cpl. Brian Kaczmarczyk of the Rehoboth Beach Police Department at 302-227-2577.

This was not the first time a vehicle door has been mangled when the occupant opened it to traffic on South First Street in Rehoboth Beach.

When the Mercury Mountaineer, below left, struck the Toyota's door, the glass shattered. It happened around 2:15 p.m. Tuesday.

Lt. William L. Sullivan said the driver of the Toyota was cited under § 92-0123 "opening of doors restricted." No injuries were reported.

There have been two accidents involving scooters this past week on Rehoboth Avenue west of the canal.

The most recent happened around 4:05 p.m. Thursday when a pick-up truck collided with a scooter headed out of town. Traffic crawled in both directions past the accident scene.

Lt. William L. Sullivan, Rehoboth Beach police spokesman, says the driver of the pick-up truck was cited for unsafe lane change. EMS personnel evaluated the scooter rider who declined to take an ambulance to the hospital. 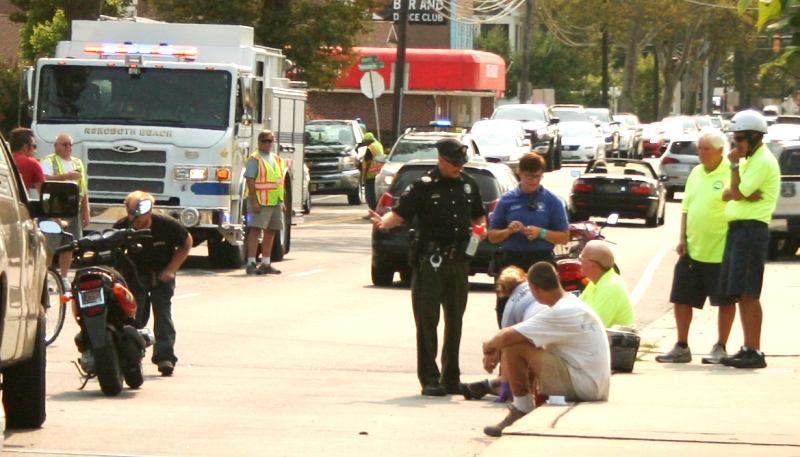 Around noon the prior day, a 53-year-old woman was injured when she pulled out of a driveway and lost control of the scooter near the Crystal Restaurant. She was wearing a helmet. An ambulance took her to Beebe Hospital.

A 23-year-old man lost all feeling below his waist after he dove head-first from a boat into three feet of water in the Isle of Wight Bay just before 6 p.m. Tuesday. 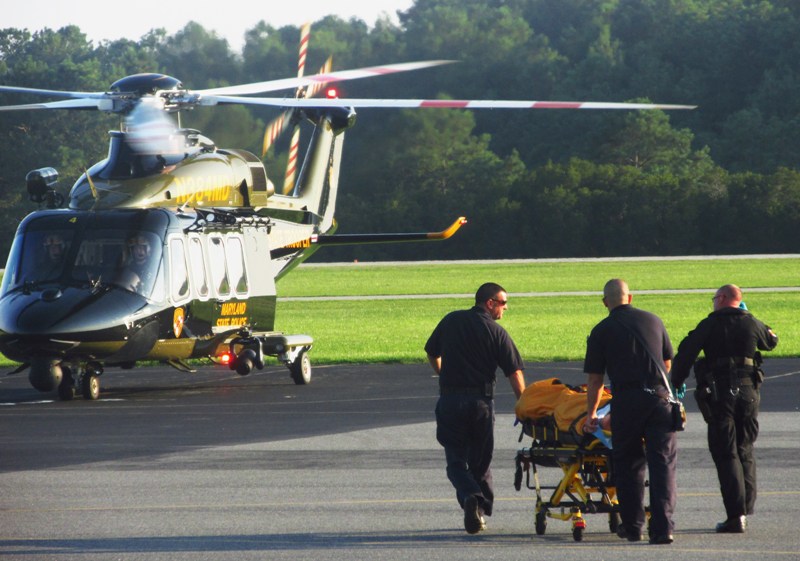 The injured man was taken by ambulance to the Ocean City Airport for a flight to Baltimore Shock Trauma Center.

Ptlm. Kosiorowski, a graduate of the Delaware Technical and Community College, began his career in law enforcement as a seasonal officer in Rehoboth Beach starting in 2011 and worked three consecutive years until he was offered a full-time position in February 2014. 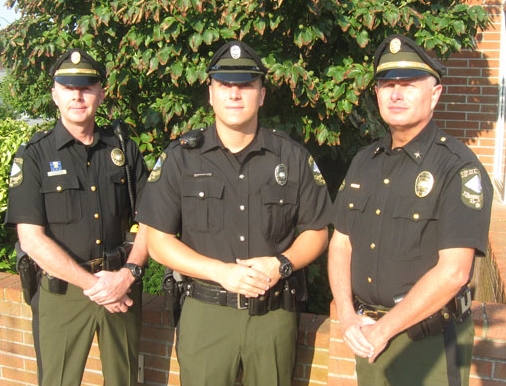 The department has 17 full-time sworn officers with the addition of Ptlm. Kosiorowski

Are you a deep thinker who enjoys the stimulation of sharing philosophy with your fellow human?

If so, you might enjoy one of the Socrates Cafes offered at the Lewes and Rehoboth Beach libraries. 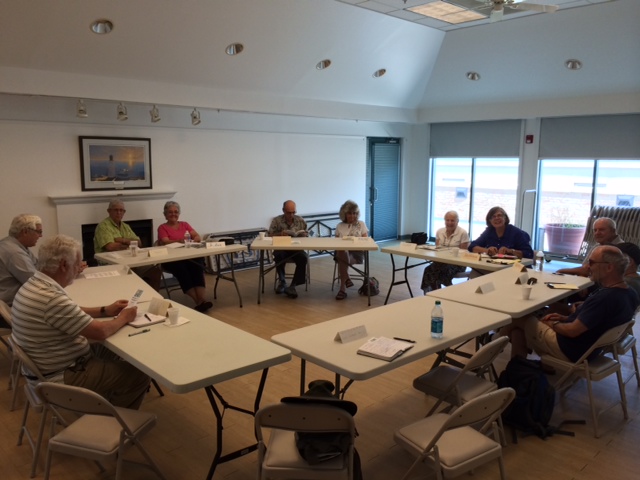 This is a popular philosophical discussion group where people from different backgrounds meet to discuss and exchange ideas on existential/philosophical questions, in a quest to gain a better understanding of human nature and a more inclusive world.

Previous topics included how fear and anger influence us and what can we do to dissipate them? What is time? Does life have a meaning?

All are welcome. For information contact Guillermo Silveira (e-mail: guillermosilveira@yahoo.com). 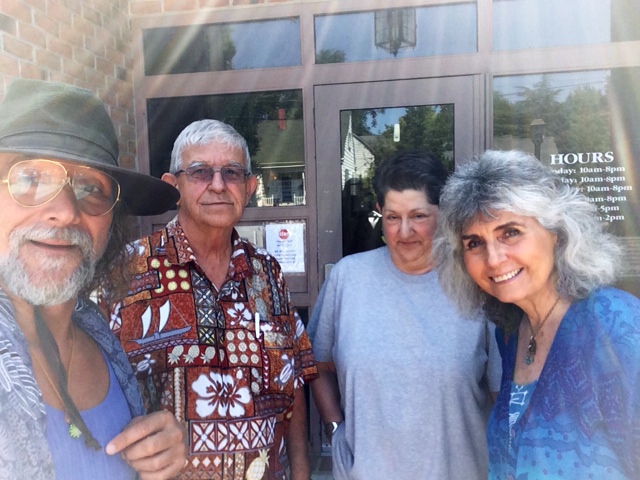 Shown are Guillermo Silveira with Steve, June and Anne. 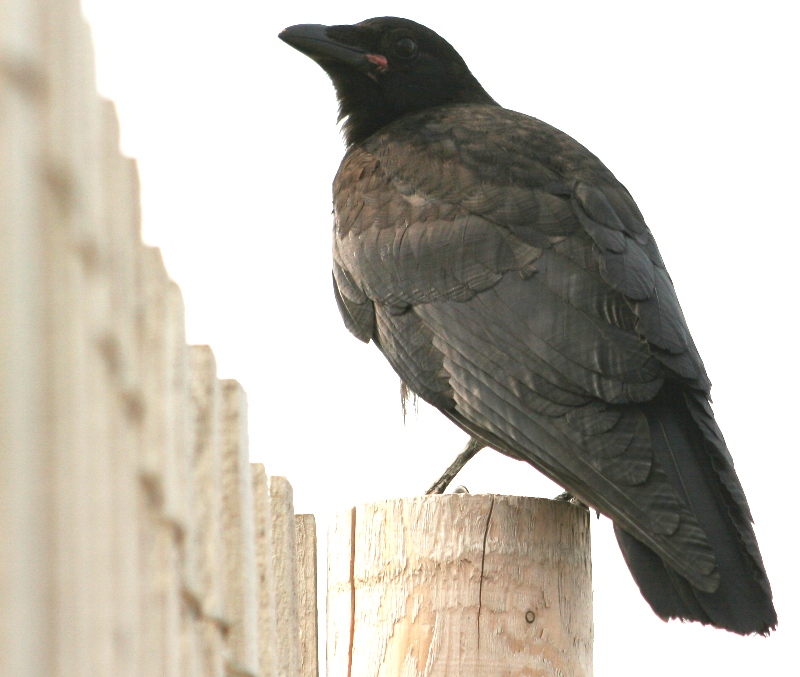 TROPICAL STORM BERTHA BLAMED FOR PAST WEEK'S SURGE IN SURF INJURIES--- Nearly 20 beach visitors in Ocean City were injured seriously enough while in the ocean on Tuesday to require an ambulance. About half were neck and back injuries. Tropical Storm Bertha, which past about 300 miles from the coast Tuesday/Wednesday, was the culprit. The Delaware beaches also experienced an increase of surf injuries with a couple beach patrols even closing the water to swimmers. See this wgmd.com article for details.

MAN PULLED FROM FENWICK SURF IN CARDIAC ARREST--- A 75-year-old man was found tumbling in the surf in cardiac arrest around 3 p.m. Friday in the Fenwick Island State Park near Assawoman Street. That is an area frequented by surf fishing vehicles. Robert Stuart, Sussex County EMS director, said bystanders performed CPR on the man until an ambulance and paramedics arrived. He said they were uncertain if the man suffered a medical problem or a traumatic injury. He had regained a pulse when paramedics brought him to Beebe Hospital with the Millville ambulance. His condition is unknown. Stuart said he must be careful because any further details released could jeopardize healthcare privacy issues.

ASSATEAGUE ISLAND DEATH INVESTIGATION--- Officials are investigating the death of a swimmer reported around 11:30 p.m. Saturday in the 6100 block of Bayberry Drive on Assateague Island National Seashore. That is about 13 miles south of the O.C. Inlet on the ocean side. Petty Officer Jasmine Mieszala confirms that Coast Guard Station Ocean City was called to assist with a person in the water. But the body washed to shore prior to arrival of the Coast Guard. She said the victim was pronounced dead and taken to Atlantic General Hospital. The medical examiner is investigating.

SERIOUS CRASH ON ROUTE 50 SATURDAY--- A crash with medevac closed eastbound U.S. Route 50 at Holly Grove Road, east of Berlin around 8 a.m. Saturday. The section of road was closed for about an hour. A state police helicopter landed at the scene and flew one patient to a trauma center.

500 POUNDS OF COPPER STOLEN--- Rehoboth Beach police are investigating the theft of 500 pounds of copper which was taken from a construction site on Oak Avenue sometime between 7 p.m. Thursday and 7 a.m. Friday. Lt. William L. Sullivan says it appears that the suspect(s) cut through the locking device to remove the copper.

WOMEN WITH INFLATABLE MAKE QUITE A STIR ON DEWEY'S BEACH--- Lifeguards received complaints Friday afternoon when a group of women brought a "gigantic male reproductive organ" with them to the beach near Saulsbury Street. "Just let them know that this is a family beach... [They] definitely can't have that with little kids running around," one lifeguard told the other over the radio. The guard radioed back seven minutes later, "they had a giant inflatable thing that should not be on the beach. I let them know. They were not compliant. It took me several tries to get it off the beach. They are leaving the beach now and they were shouting obscene things as I was walking away and I have had three complaints [since] I've been back from lunch. I have been back for 10 minutes. It's ridiculous." He said they finally removed the inflatable from the beach despite their resistance.

I-Team: Lifeguards distracted by cell phones on the stand

Delaware ranked 7th in the nation for solar energy

This report is being e-mailed to 1,919 recipients. Thanks for your support!