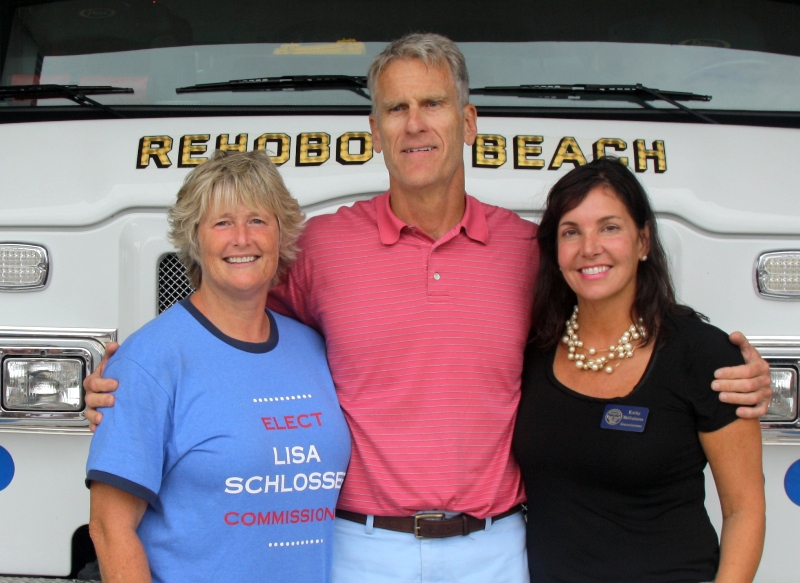 Rehoboth Beach Comm. Paul Kuhns became the first candidate this past Saturday to defeat Mayor Samuel Cooper in his 27 years as mayor. Incumbent Comm. Kathy McGuiness and Lisa Schlosser won the two commissioner seats that were up for grabs.

This was the seventh time Mayor Cooper faced challengers as mayor. Comm. Kuhns had actually lost to the mayor by 12 percent in a prior match-up in 2008.

McGuiness gathered the highest vote total for a single candidate in recent memory, if not in Rehoboth Beach history. 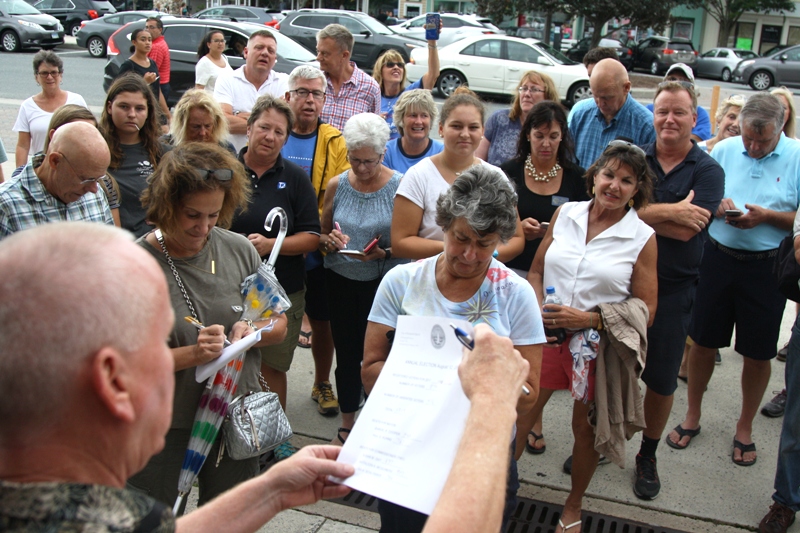 Here are the 2017 election totals:

This is the vote total sheet held by Wayne Steele.

The winners will be sworn into office on Friday, September 15, 2017, at the regular commissioners meeting before they begin to serve three-year terms. Comm. Kuhns said Sunday that he has given some thought on various candidates to appoint to complete the remaining term for his commissioner seat. "I have some time to think about as well as consult with others," he added. "There is really nothing I can do until sworn in."

Local EMS crews were already inundated with ambulance calls when they received a report of a woman who was rescued from the ocean at Gordon's Pond around 1:20 p.m. Sunday. The victim, a 57 year old, had possibly been tossed in the surf, was experiencing severe trouble breathing and was combative, suggesting possibly a head injury. 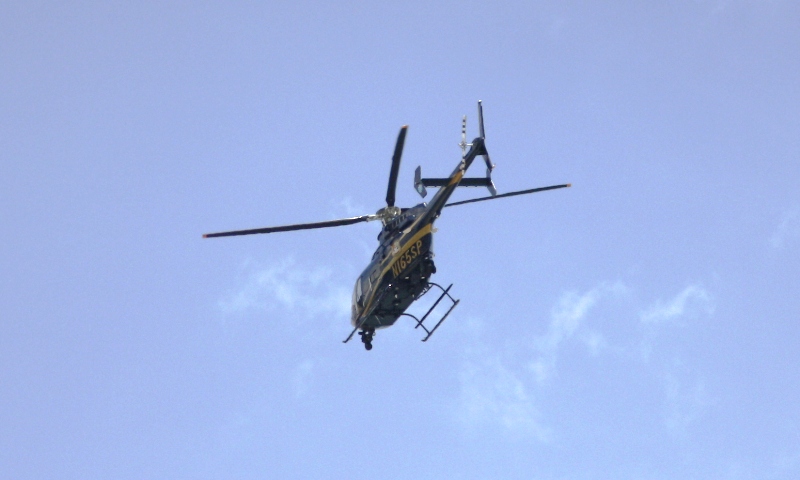 The state police helicopter, Trooper 2, landed at the scene to assist the Sussex County EMS supervisor with an additional paramedic. They treated her at the scene and eventually removed her from the beach and loaded her into an ambulance. While taking her to Beebe Hospital, says Robbie Murray, deputy director of operations for Sussex County EMS, the woman lapsed into cardiac arrest. They were able to resuscitate her, and that was the last update he had to share regarding her condition. He said it was too early to speculate if she had suffered a medical problem, near drowning or surf-related injury.

NO FUN IN FUNLAND FOR 81-YEAR-OLD ROCKVILLE WOMAN

Rehoboth Beach police arrested an 81-year-old woman from Rockville, Maryland this past Wednesday evening after attempting to use counterfeit tickets at Funland. Police identified the woman on Friday as Marilyn Hammerman. 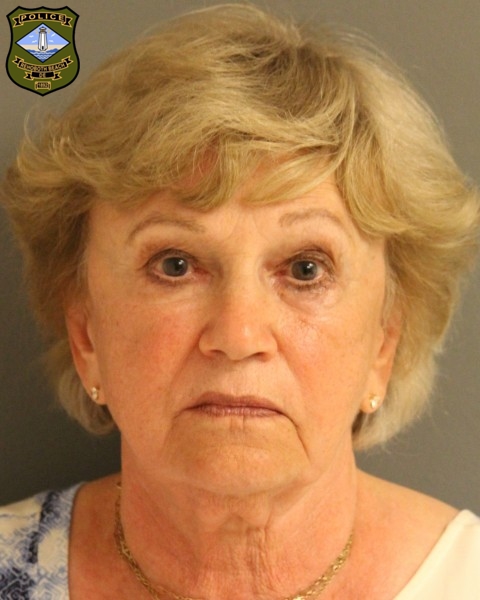 Hammerman, police said, was in possession of approximately 20 fraudulent tickets and was arrested and charged later Wednesday evening following an investigation into the allegations. She was charged with theft of services under $1500, a misdemeanor, and was released on a $100 unsecured bail.

In a statement provided by Christopher Darr, Funland personnel manager, it says an employee was handed the counterfeit Funland tickets at the bumper cars. "The employee notified a family member, who then spoke with the individuals in possession of the counterfeit tickets. One female in the group stated that she received the tickets from her adult son earlier this year but refused to provide Funland with her son's contact information for further inquiry. She was then asked if she would be more comfortable providing her son's contact information to the police. She agreed and the police were notified. When the police arrived, they collected contact information and placed a call to the woman's son. Her son stated via phone that he had not provided the counterfeit tickets to his mother and knew nothing about the situation."

"Despite the quality of the counterfeits," the statement reads, "our employees were able to immediately recognize them as fake. Funland employees handle large quantities of tickets every day and moved swiftly when discrepancies in appearance and quality were detected with the counterfeit tickets. We were impressed with our staff for their attentiveness and quick response in alerting a family member," the statement reads. 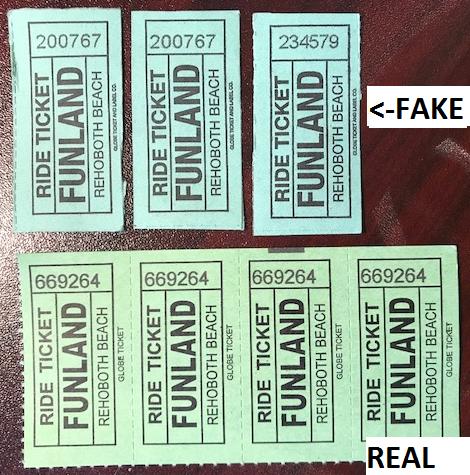 "For more than 56 years," the statement continues, "our Funland family has taken great pride in the value we offer our loyal customers. Every day, we strive to carry on the tradition of affordable fun for the Rehoboth Beach community. Counterfeiting tickets is not only illegal, but it undermines our ongoing mission to offer great family fun at a reasonable price, to provide 'today's fun at yesterday's prices.' When faced with a counterfeit situation, Funland is committed to pursuing those responsible, for both the good of our business and the continued satisfaction of our customers."

"I am so thrilled to be home. It is a beautiful country. But there is no place like Delaware!" Markell stated just after he crossed the finish line next to the Rehoboth Bandstand. 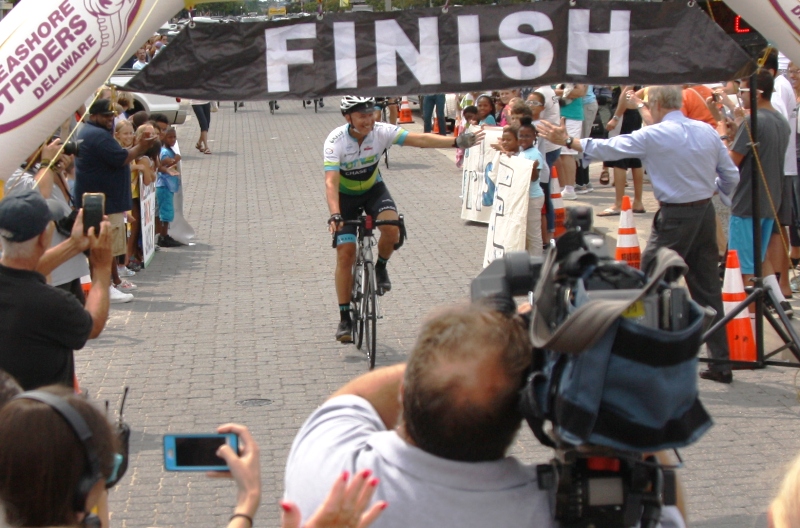 He and Sen. Tom Carper addressed the crowd that gathered. "When [my wife] Martha and I heard that Jack was going to get on a bicycle in Oregon, on the west coast, and ride all the way to Rehoboth Beach, Delaware, my wife and I looked at each other and said: 'He has lost his mind,'" Sen. Carper told the audience. 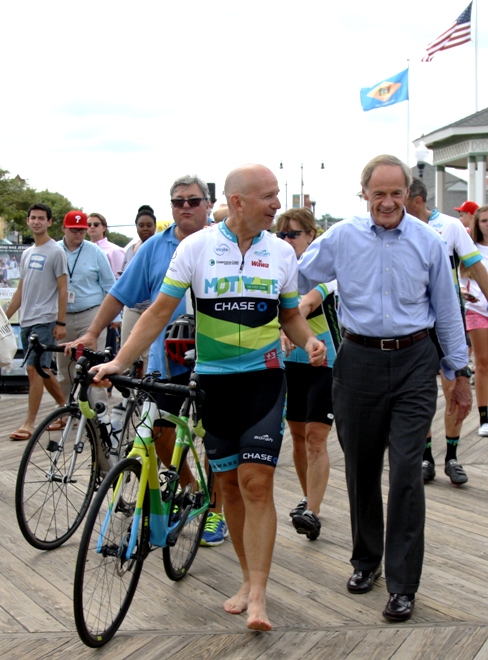 "You have done something I think that a lot of us would dream of doing, would love to do, and never have the tenacity to actually do it and do it successfully… you are an inspiration to all of us," Sen. Carper added. "We are enormously proud of you." 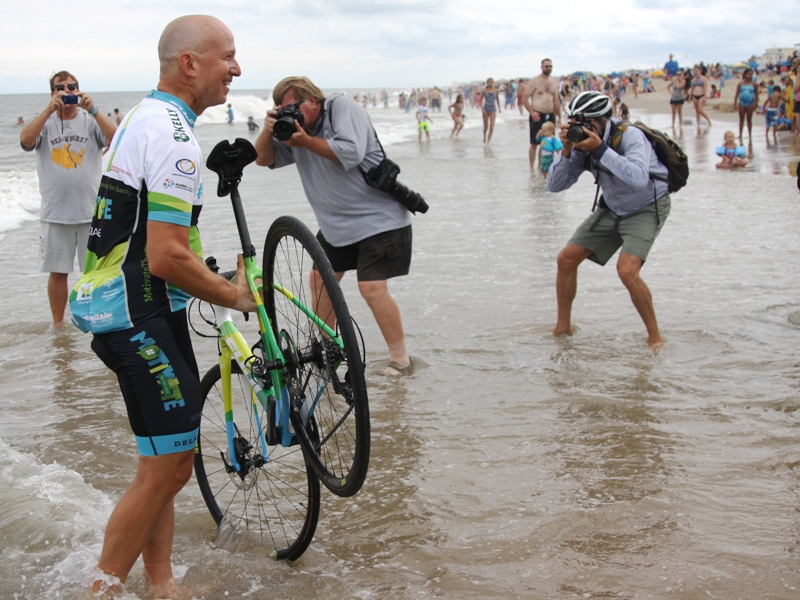 During the trip, Markell, 56, said he lost only four pounds. The ride started on June 19 in Astoria, Oregon and consisted of 50 total days, 46 riding days, passing through 10 states and into Ontario, Canada. He traveled through parts of Oregon, Idaho, Wyoming, South Dakota, Minnesota, Wisconsin, Michigan, New York, Pennsylvania and, of course, Delaware! He averaged 80 miles per day with a total of 3680 miles.

"We raised a lot of money for Delaware organizations that serve kids under the umbrella of Motivate the First State," Markell stated. "Motivate the First State is about getting Delawareans active doing good deeds. You can go online to MotovateTheFirstState.com and sign up and logon. We would like you to," he told the excited crowd. 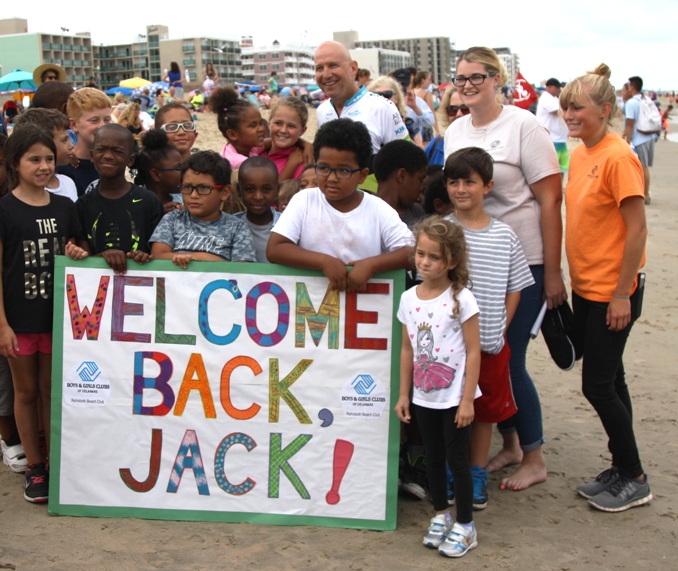 He shared highlights from his travels on a blog he created, while raising more than $120,000 for Motivate The First State. About two weeks ago, a handful of fellow bicyclists joined his journey, and as they approached Rehoboth, more than 100 other bikers came along as well.

Markell is not the only athlete ending his cross-country bike ride in Rehoboth Beach so far this summer. On July 23, Mark Williams, a Boston University finance professor and former RBP lifeguard, decided to end his cross-country fundraiser for "Bikes Not Bombs" at the beach patrol to honor the late Tommy "TC" Coveleski. 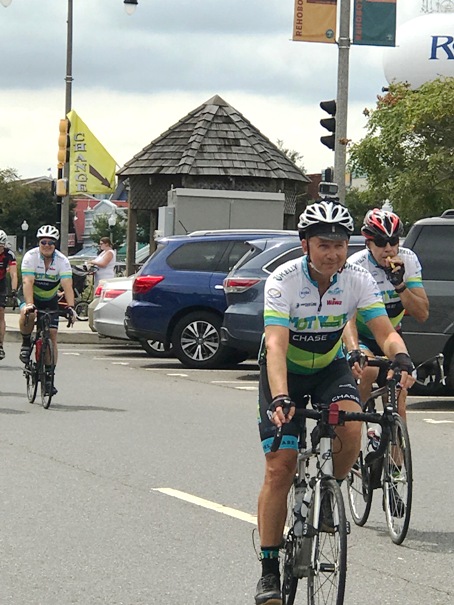 This Chevy SUV collided with the Rehoboth Beach police car on southbound 1st Street at Rehoboth Avenue around noon on Friday. 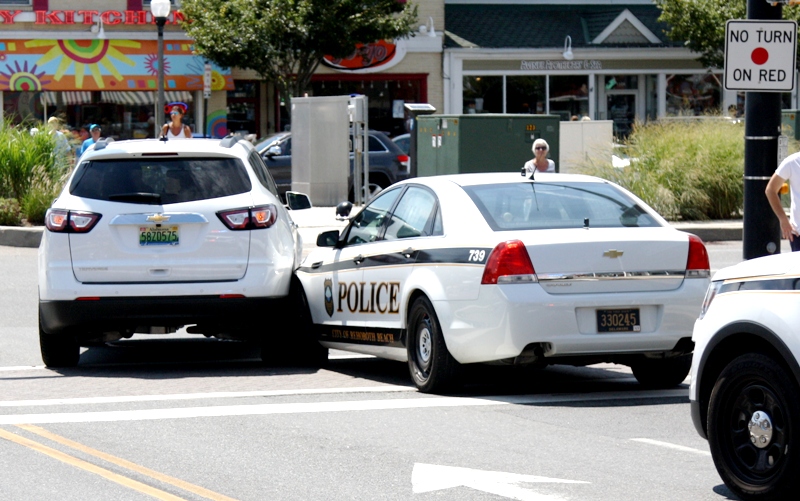 There were no injuries. No word yet from police on charges, if any. But the officer who reported the crash stated that the SUV driver had cut to the right-turn lane in front of the police car when the collision occurred.

Last Monday brought heavy rain across the shore with almost two inches falling in Rehoboth Beach according to the boardwalk DEOS weather station.

Rehoboth experienced flooding in the usual trouble spots, including the second blocks of Saint Lawrence Street and Wilmington Avenue, and the city hall lot. 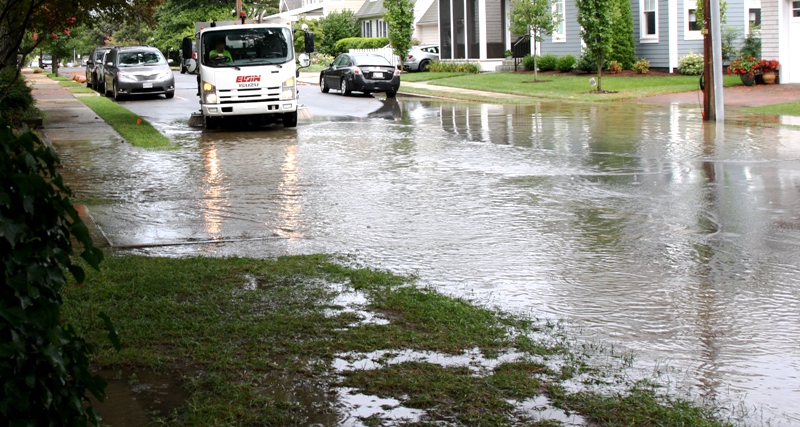 Here is storm video from the News Journal website and an article regarding a tornado or micro-burst that struck West Ocean City.

Firefighters discovered the body of a woman while extinguishing a blaze in this trailer on Lawrence Lane in Angola Crest off Camp Arrowhead Road. The fire was reported around 12:03 a.m. this past Thursday. Rehoboth Beach firefighters were assisted by those from Lewes and Indian River. 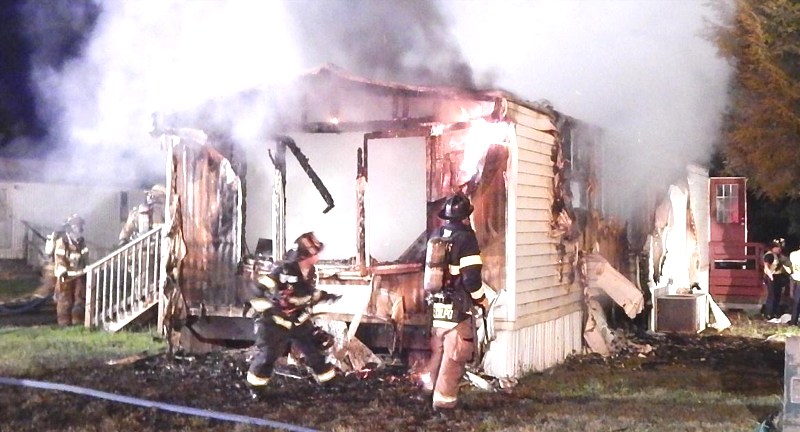 The woman's body was taken to the state Division of Forensic Science lab for an autopsy. The state Fire Marshal Office is investigating the fire's cause and origin. Damage is estimated to be $30,000. An Indian River firefighter sustained an injury that was later treated at a medical facility.

There were no injuries reported when the engine compartment of this car burst into flames in the Rehoboth Safeway parking lot around 7:35 p.m. this past Friday evening. 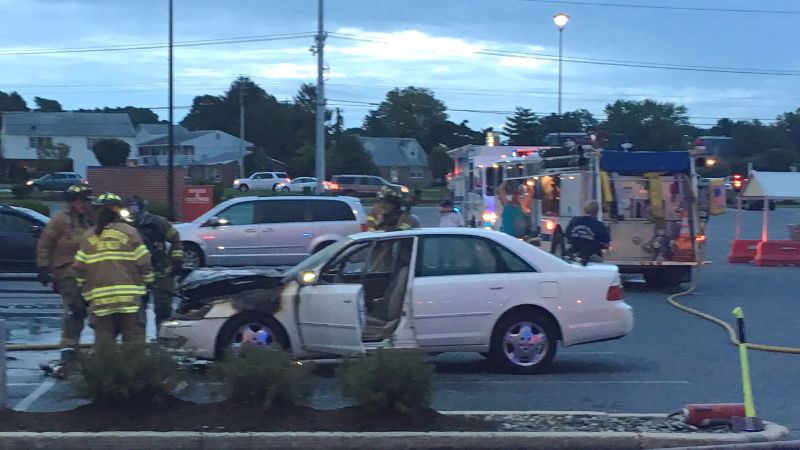 Firefighters had it under control within minutes.

It is not often one sees a classic fire truck at a house party in Henlopen Acres. This past Tuesday, Henlopen Acres and North Shores property owners helped raise money for the Rehoboth Beach VFC by attending a cocktail party fundraiser which included rides on the fire truck!

Comm. Kathy McGuiness says she was approached by members of the fire company last year to assist with some fundraising. She and co-hosts Carrie & Bryce Lingo came up with this idea to host the event at her home. 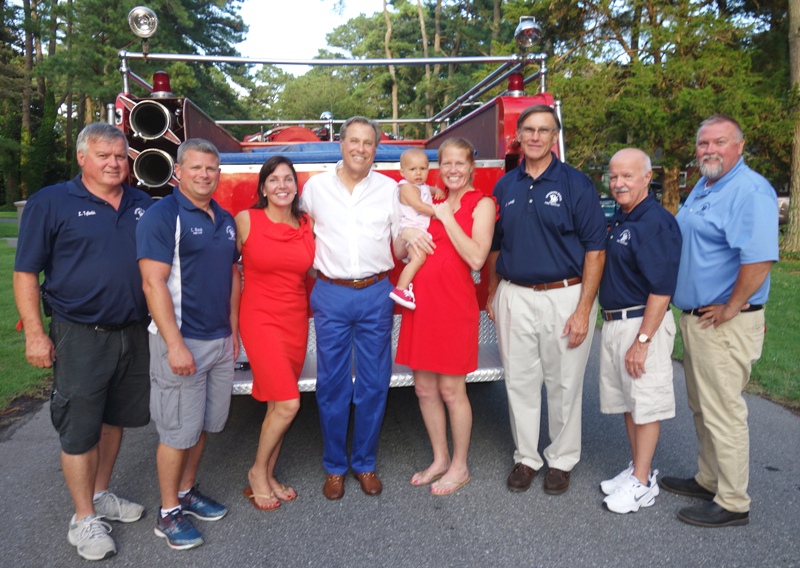 "I was happy to get out and talk to the people we serve and protect to explain to them how we operate," Chief Marsch said. "Kathy, Carrie and Bryce did a wonderful job putting the event together."

Please see the RB VFC website for details on how you can donate! 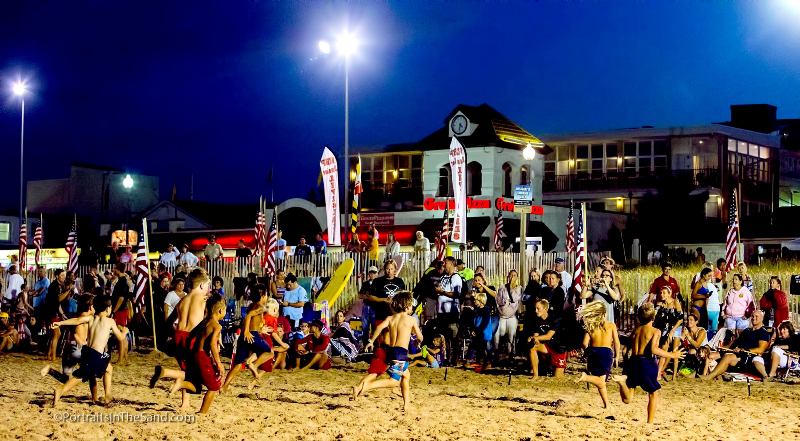 The junior guard program has now ended for the summer. But the party is tonight, Monday, at 6 p.m.

Rehoboth Beach police have responded to several reports of fox sightings this past week on the south end of town, oddly, this was one of them. The bird wasn't fooled but apparently one caller to police was. The complaint received just before 8 a.m. Sunday reported a rabid fox here on the corner of King Charles Avenue at Lake Drive on Silver Lake. 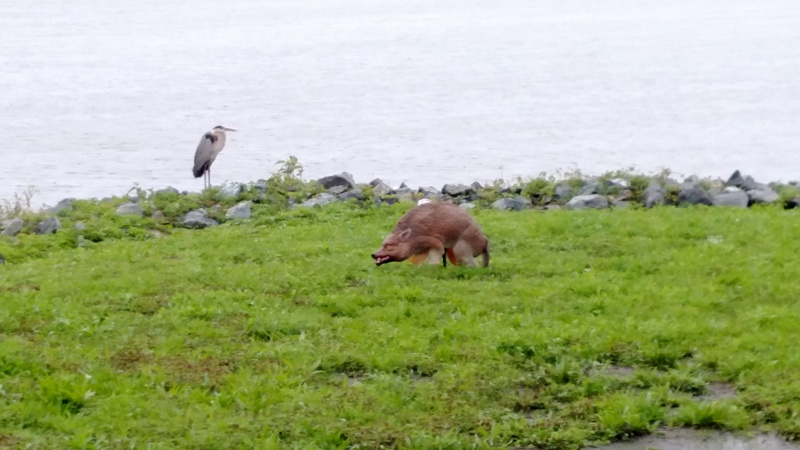 The great blue heron is real but the other critter is fake! As for the heron, it was not scared. Passer-bys were observed pausing before continuing.

DEATH INVESTIGATION IN DEWEY BEACH--- A 37-year-old man from Philadelphia was discovered dead by his mother just before 5:30 a.m. Sunday at a residence in the ocean block of Saulsbury Street. Sgt. Clifford Dempsey, police spokesman, says the man was pronounced dead at the scene. The cause of death is a suspected overdose pending the outcome of an investigation by the Delaware Division of Forensic Science.

JOGGER BITTEN BY DOG ON BEACH, TAKEN TO BEEBE HOSPITAL--- A dog attacked a 74-year-old man jogging along the beach just south of the Rehoboth Beach city limits around 3:25 p.m. this past Wednesday. The man was taken to Beebe Hospital bleeding from his elbow. No word yet from DNREC or the state police on charges, if any.

2 MORE $20 COUNTERFEIT BILLS REPORTED--- Bogus $20 bills were received by two ice cream shops in Rehoboth Beach this past Wednesday. Police are investigating the incidents. No word yet from police if they were related to the good quality counterfeit bills discovered back in June.

O.C. RESIDENCE CONDEMNED AFTER SINKHOLE--- A residence on 136th Street in Ocean City was condemned last Wednesday after a sinkhole opened up. Lindsay Richard, police spokeswoman, says a building inspector was notified and chose to condemn the building until the residence could be repaired and made stable. "It was determined that an old septic tank had caved in on the property. The city has been in communication with the co-op that owns the property and the hole and home should be repaired in the coming days," she added.

Reining in beach-spreading, not to be confused with manspreading

In Dewey, so far only Cooke and Hanson are on the ballot (last day to file is this Thursday!)

Dagsboro and Frankford police departments could soon be patrolling together

This report is being e-mailed to 1,992 recipients. Thanks for your support!