Having trouble viewing this report or its photos? Click here: http://henney.com/weekend13/

RBP LIFEGUARD STANDS BUSTED, OTHERS BURIED, SCATTERED IN DUNES
Could lifeguards be responsible for the mischief?

The spree started last Sunday when guards reporting for work discovered the Hickman Street lifeguard stand buried in the sand. That happened again on Wednesday, but that time the stand had been found buried near Queen Street. The Hickman Street stand is where the section lieutenant sits.

On Friday, vandals got a hold of two more stands from the Hickman section. They were assigned to Queen Street and Prospect Street, known to lifeguards as Siberia and Birdland. Both had been busted, and one was un-repairable, broken in several pieces.

Public works personnel discarded the Birdland stand in a construction dumpster after salvaging the sign off the back. Police Chief Keith Banks puts the value of the stand at $500. 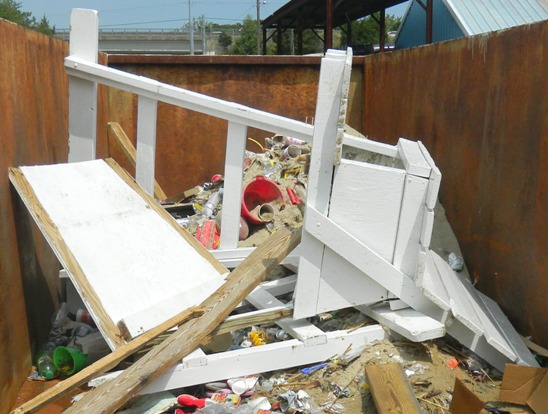 The other stand waits repair in the public works yard. It had busted struts among other damage. 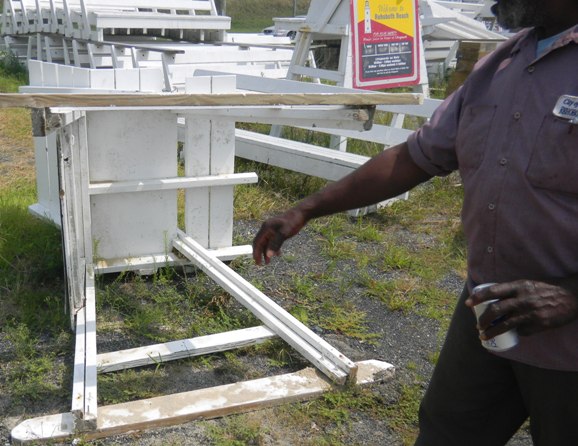 On Friday, Mel Craig, Rehoboth Beach Public Works director, says his crews have removed five broken lifeguard stands from the beach so far this season, which includes the two from Friday.

Craig also said two boardwalk benches have disappeared. But Chief Banks says no benches have been reported stolen this year.

On Sunday, lifeguards reporting for work discovered another round of mischief in the Deauville section.

The section's lifeguard stands were removed from the beach and found scattered in the dunes. 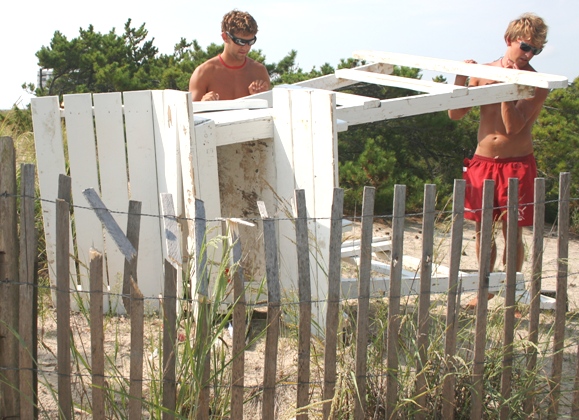 One stand was even dragged to the top of the Deauville lot parking attendant's shack. The parking meter techs and lifeguards could not remove the stand from the shack without breaking, so it remained there much of the day on Sunday. 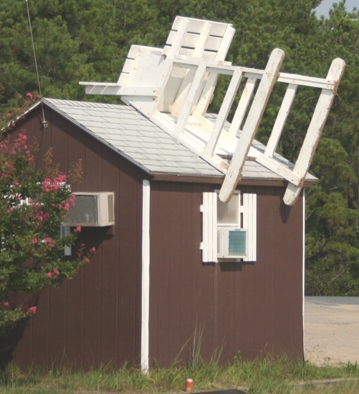 Sources familiar with the Rehoboth Beach Patrol say there is a long-time rivalry among the RBP's sections. The beach is divided into four sections, Deauville, Olive, Rehoboth and Hickman, each supervised by a lieutenant at those locations. They have a tradition of playing pranks on other sections.

This past week, the Hickman and Deauville sections were targeted, with the Hickman's lieutenant chair singled out twice. That could imply somebody with knowledge of the RBP hierarchy. The mischief appears to have involved more than one person, and it started just as many guards headed back to school.

"We had a very exciting week for our stranding team," writes Suzanne Thurman, executive director of the MERR Institute. "We now have the first confirmed sea turtle nesting site to have occurred in Delaware. This little piece of history occurred on Thursday, Aug. 18th in the wee hours of the morning." 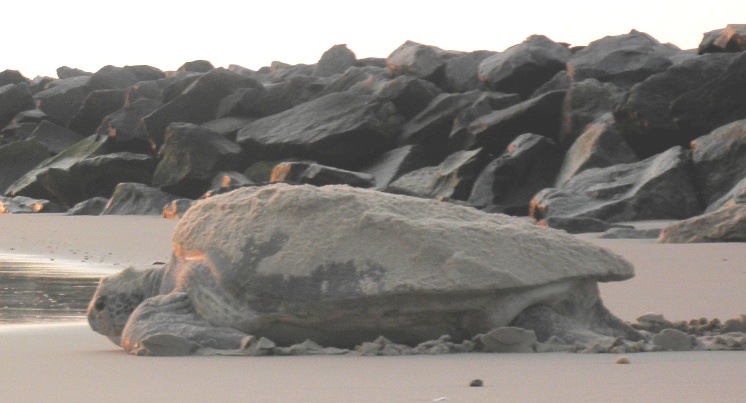 "An adult Green sea turtle came ashore at the Navy jetty at Cape Henlopen State Park," Thurman says, "and after making two false starts, she selected a third location where she proceeded to deposit 194 eggs. Unfortunately she elected to make her nest within the surf zone, so we made a decision to relocate her nest to higher ground. With the help of several MERR volunteers, we spent approximately three hours carefully unearthing the fragile eggs and moving them to the new nest that we created." 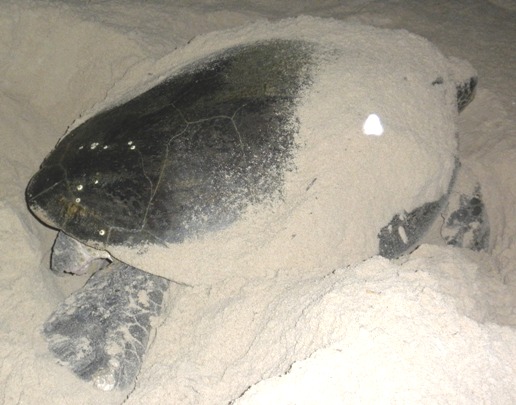 In the e-mail sent to MERR volunteers and supporters, Thurman writes that "Delaware is considered to be too far north to provide adequately warm temperatures for incubation, and in addition it is late in the season for nesting anywhere. So there are a few strikes against these eggs ever hatching, but we will continue to do everything we can to keep them safe. We are currently monitoring the nest, which we have enclosed to protect it from predators. But foxes are very persistent in trying to get to some tasty turtle eggs for dinner, so we are recruiting volunteers to take a shift during the night time hours to provide a little extra insurance against nest predation. If any of you would like to assist, please let me know and I can sign you up for a shift."

See this Friday's News Journal article or this updated article from Saturday.

MAERSK HARMONY, AMONG OTHER LPG TANKERS, ANCHORED OFF INDIAN RIVER INLET. BUT WHY?

Visitors to the beach recently have noticed several tankers anchored off the beach east of the Indian River Inlet.

One source in the shipping business says, from what he understands, the vessels started anchoring there for wireless coverage which is better in that location. In the past, the ships would anchor between the sea lanes farther from shore, while waiting orders.

The vessel closest to shore is the 160-meter Maersk Harmony, registered in Singapore, which has been anchored for several weeks about seven miles southeast of Rehoboth Avenue. It has this distinctive bluish hull. 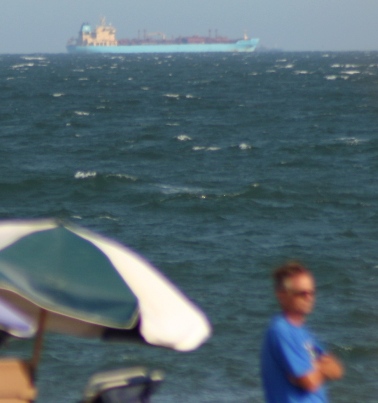 The Maersk Harmony is among a group of five liquefied petroleum gas (LPG) tankers. The others are the Nordic Gas (formerly known as the Henriette Maersk), Baltic Gas (formerly the Canaima and Henning Maersk), the Desert Orchid, and the Dancing Brave.

Interestingly, all five LPG tankers are registered in Singapore and are owned or operated by the same companies. No response has been received from e-mails sent to the Maersk press offices. This is the same company that owned the Maersk Alabama which was pirated off Somalia.

The shipping companies are often tight-lipped as to their intentions. But the AIS data transmitted by all five ships show "floating storage" as their destination with a previous port of Philadelphia.

To view what vessels are currently there, check this AIS chart.

The beach was blanket-to-blanket on Saturday. Rehoboth Beach lifeguards handled a total of 17 missing or found children reports.

More than half of the reports originated from the Rehoboth or Wilmington stands. That is the most for any Saturday so far this summer, more than two lost/found children reports per hour. 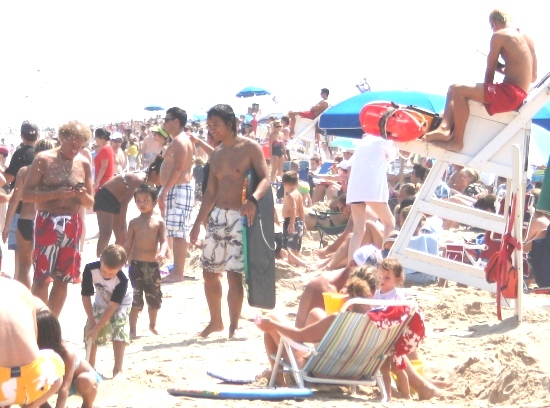 Beach goers were treated to a tremendous dolphin show early Wednesday evening and Thursday during the day. The dolphins performed various maneuvers along the north end of Rehoboth Beach as they slowly swam south. 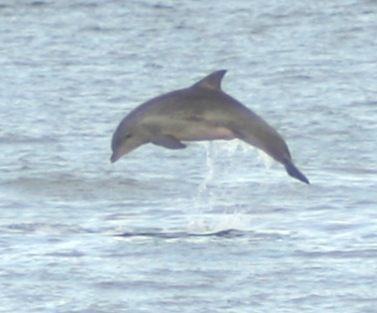 The crowd was amazed, as even regular beach goers were impressed with the performance, with moments with more than one dolphin in the air simultaneously. The dolphins came close to shore as well as to people in the water. 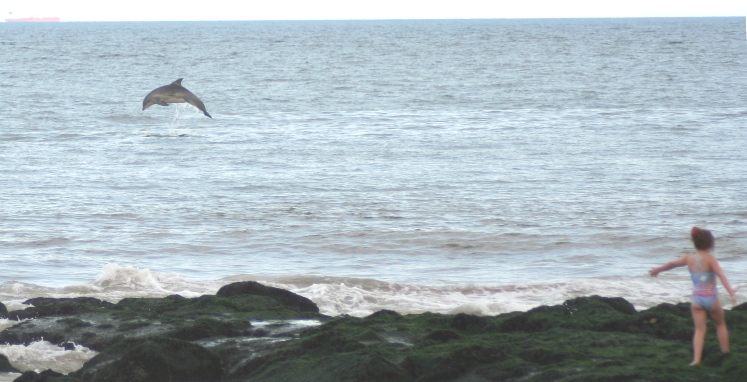 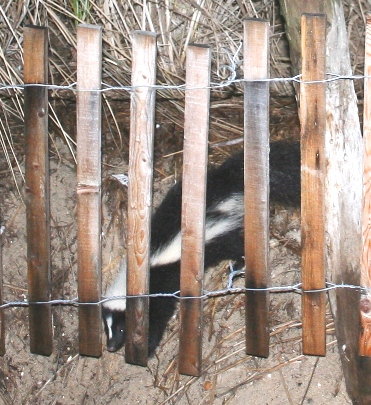 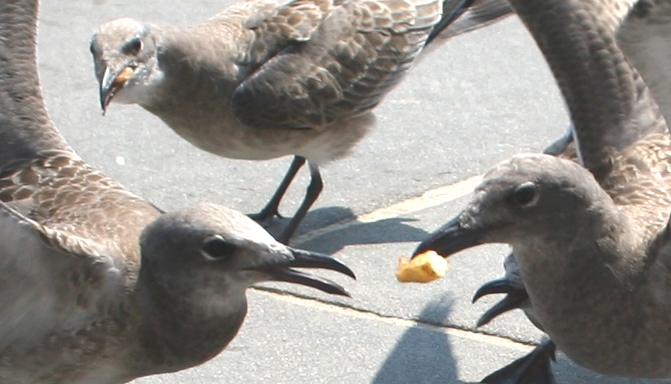 BOY NEARLY DROWNS IN CAMPGROUND POOL--- A 7-year-old boy was discovered floating along the bottom of the new pool at Gulls Way Campground in Dagsboro. When bystanders pulled him from the pool around 5:50 p.m. Saturday, he had not been breathing for several minutes. The boy became somewhat responsive when taken to Beebe Hospital by ambulance and was breathing on his own.

SERIOUS SURF INJURIES IN OCEAN CITY--- A 76-year-old man suffered a suspected critical surf-related injury while in the ocean at 4th Street around 11:15 a.m. Thursday. He was reported in cardiac arrest, but later revived and taken to Atlantic General Hospital. That was the last details Capt. Butch Arbin says he has. The man was later transferred to a trauma center.

On Saturday, a 44-year-old woman was flown by a medevac helicopter after she struck her face on the ocean floor around 12:30 p.m. off 135th Street. She had to be assisted from the surf, and was suffering from numbness and tingling in her upper extremities.

2 MEN INJURED IN FALL FROM 2ND FLOOR--- Rehoboth Beach police and EMS personnel responded to Baltimore Avenue around 3 a.m. Sunday. Two men, a 27-year-old and 33-year-old, were reported injured after falling about 20 feet from the second floor. Friends had already helped them off the ground when rescuers arrived. One man landed on his head and was complaining of severe head pain. The other had a bruise to his head and neck pain. At least one of them admitted to have been drinking. They were taken by ambulance to Beebe Hospital.

DEAUVILLE BEACH BAG THEFT--- Rehoboth Beach lifeguards and police received a complaint that a beach goer's tote bag had been stolen from the beach in the Deauville area. Police checked the beach and trash cans for evidence. It was reported just before 3 p.m. Saturday.

2 CARS BROKEN INTO ON HENLOPEN AVENUE--- Rehoboth Beach police were requested to take a report after two vehicles had been discovered broken into on Henlopen Avenue near Easton Street. The report was made Sunday afternoon.

CRASH CLOSES COASTAL HIGHWAY--- Four people were injured after a two-vehicle crash closed northbound Coastal Highway at Rehoboth Avenue-Extended around 12:40 a.m. Friday. The most seriously injured was a 53-year-old man with head, chest and arm injuries. He supposedly had taken a mix of alcohol and prescription medication. The other three injuries were not serious. They were taken to Beebe Hospital.

MOPED CRASHES INTO OCEAN CITY BUS--- The rider of a moped was seriously injured after crashing into a city transit bus around 12:50 a.m. Sunday. It happened on the northbound lanes of Coastal Highway at 94th Street. An Ocean City medic took the man to the hospital because the closest medevac helicopter had an extended arrival time.

GIRL STRUCK BY CLOTHING RACK IN OUTLET SHOP, TAKEN TO HOSPITAL--- A 9-year-old girl complained of hip and rib pain after she was struck by a falling clothing rack. It was reported around 2:50 p.m. Saturday at an outlet shop on Seaside Outlet Drive outside Rehoboth. She was taken to Beebe Hospital.

MAN INJURED BY FALLING MIRROR--- A 43-year-old man was reportedly moving furniture around when a large mirror from a bureau fell and struck him in the head near his right temple. It knocked him out. He eventually came to, and called for help. He was taken to Beebe Hospital complaining of neck and back pain. It was reported on Mount Joy Road, east of Millsboro, around 11:40 p.m. Saturday.

Fri. 2:20 a.m. --- Lewes firefighters were alerted for a watercraft in distress off Bay Avenue. Three occupants were on board the 20-footer and they had fired off several flares. They were described as not in distress but "under power."

Sat. 12:35 a.m. --- Two patients were taken to the Ocean City Coast Guard station after a minor boating accident. One had a possible broken collar bone and the other was not serious as well.

Sat. 12:50 a.m. --- A suicidal man jumped from the Route 50 bridge in Ocean City. Police watched him as he drifted north. A DNR boat rescued the man by 1:05 a.m. and took him to the Coast Guard station for EMS.

Sat. 10:15 p.m. --- A 40-year-old man and 11-year-old boy were late returning from a ride on a Jet-Ski on the Assawoman Bay west of Ocean City. Delaware officials became involved in the search several hours later. They heard cries for "help" coming from the bay south of Route 54. The two were safely located by 10:30 p.m.

EARLY MORNING O.C. FIRE ALARMS--- Only two early morning fire alarm activations to report this weekend in Ocean City. The first was just before 4 a.m. Saturday at the 4100 Building on 41st Street. An audible alarm sounded and people evacuated. Around 4:50 a.m. Sunday, a smoke detector for no known reason activated the fire alarm at the Plim Plaza on 2nd Street. There was no smoke or fire discovered in either case.

Beach replenishment to begin in Rehoboth, Dewey next month

Dewey lifeguards to have shorter season