Having trouble viewing this report or its photos? Click here: http://henney.com/weekend14/

The "Storm of the Century," as some meteorologists called Hurricane Irene, left amazingly minimal damage in its wake in the Rehoboth area.

Only 6 inches of rain fell on Saturday and Sunday, according to the DEOS Rehoboth Beach weather station. Between noon and 3 a.m. the average winds on the boardwalk reached the 20 and 30 m.p.h. range, with the highest gust of 45 m.p.h. recorded at 6:11 p.m.

The hurricane was blamed for at least one suspected tornado which destroyed and damaged homes near Lewes early Saturday evening. 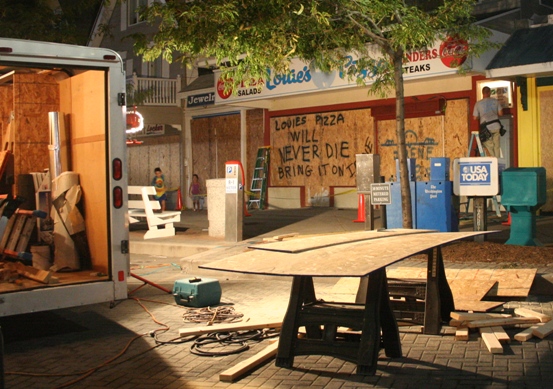 The last Friday night in August, and Rehoboth Beach looked like a ghost town. After the governor issued a mandatory evacuation order, only a few media and residents remained.

Businesses started closing after police spent Friday morning and afternoon talking with shopkeepers, encouraging them to close by 5 p.m. A few bars remained open until late in the evening. The governor ordered all businesses to close by midnight.

Everyone was ordered to leave town by 9 a.m., Saturday. On Saturday, the Bake Shoppe and 7-Eleven were among the few businesses to re-open. But the city insisted they close.

Police established checkpoints, blocking the inbound lanes of Rehoboth Avenue, Bayard Avenue and State Road, shown below, starting around 8:30 a.m. Saturday. Those who left town were not permitted to return without a good reason.

Police almost arrested one man around 7:20 a.m. Sunday after he was refusing to obey the officer at the Bayard Avenue checkpoint. The officer called for another officer to arrest him, when the man "decided otherwise." Ironically, Rehoboth Beach was less than 40 minutes from reopening to all visitors at 8 a.m.

The National Weather Service issued a tornado warning around noon Saturday as wind and rain pounded Rehoboth Beach. Dedicated public works crews continued to retrieve benches, like these from the Deauville section. This photo was taken a minute after the NWS detected a possible tornado off Cape Henlopen. 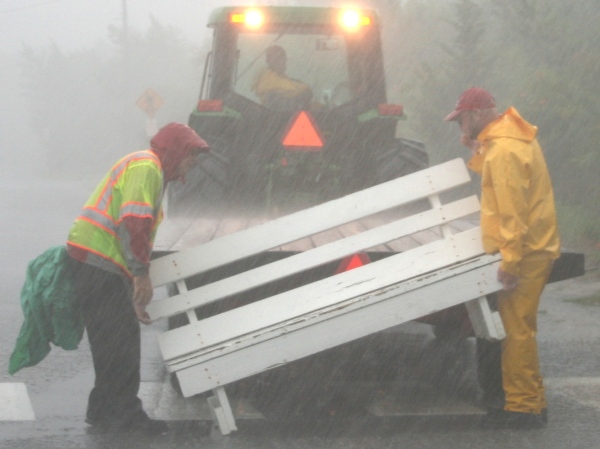 Not even a state of emergency could stop Coastal Towing! A police officer came across this red Dodge Durango with Florida tags just before 2 p.m. Saturday. It was parked up on the sidewalk in front of Jewels by the Sea in the ocean block of Rehoboth Avenue. The officer said the shop was boarded and nobody appeared to be around. So they called Coastal Towing for removal.

A big fear was that high tide at 7:10 p.m. Saturday would cause extensive flooding. These photos were taken from the Star of the Sea condo about 90 minutes before and about 25 minutes after high tide Saturday.

The surf battered the dunes, snow fencing, storage shacks, and pushed sand, gravel and sea water through the dune crossovers. But damage on the opposite side of the dunes was minimal -- even in areas of lower elevation such as Dewey Beach and North Shores. 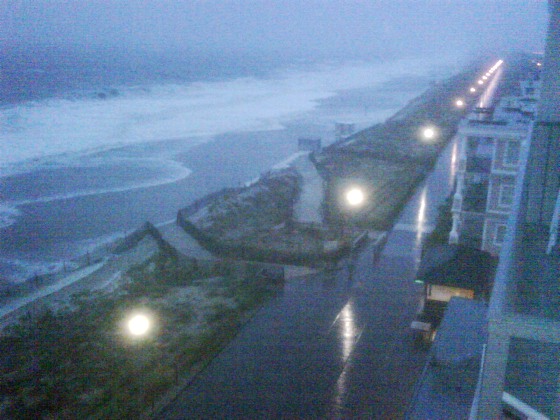 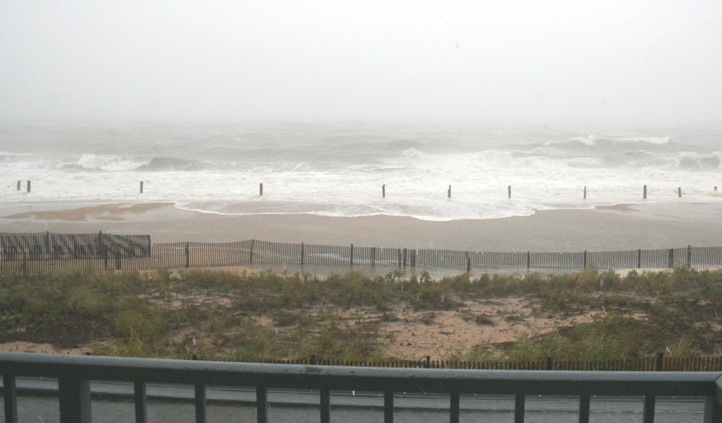 At 7:13 a.m. Saturday, a frightening alarm reverberated across town -- blasting some people from bed with a wobbling siren that sounded for several minutes. It was noticeably different than the firehouse siren, but just as deafening.

The Whelen WPS2905 public address system was installed several years ago, purchased with homeland security grant money, not city funds, in excess of $10,000. The speakers are mounted on the monopole next to the firehouse on Rehoboth Avenue. Whelen promises a range of up to a mile and a half. 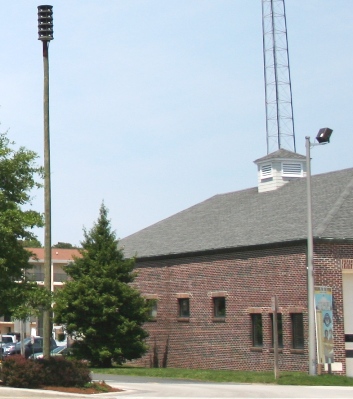 Those who stuck it out in town this weekend are weighing in on the town's first use of this emergency city-wide public address system, and its usefulness. Until Saturday, it had never been activated other than for a test.

One Country Club Estates resident, who said he was "horrified" Saturday morning when he heard the siren, added that he follows "news and never saw anything about this. Really scary that the first we know about this was during a category 1 storm."

While the majority of people within a few-block radius of city hall heard the siren, many had trouble understanding the message.

The first message on Saturday stated that a mandatory evacuation had been issued and they should listen to WGMD or go to the city's Website for information. The News Journal posted a recording of the actual message on its Website. Later Saturday it was activated for tornado warnings.

People farther away, on the boardwalk, and in the ocean-front condos, reported hearing nothing, not even the siren.

Magnum Electronics, the local Motorola and Whelen dealer, has the details posted on its Website.

REHOBOTH BEACH, BEFORE AND AFTER IRENE

The most obvious damage has been to the dunes, fencing and a few storage shacks.

The decreased sand level has exposed jetties and drain pipes. This article in the Gannett papers says beach replenishment is scheduled to start after Labor Day in Rehoboth Beach and Dewey Beach! 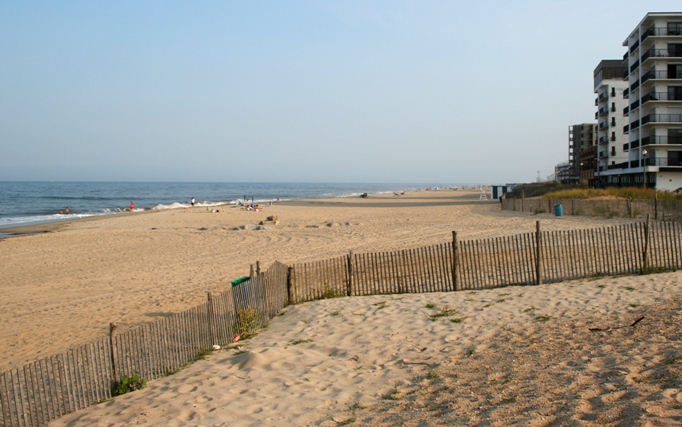 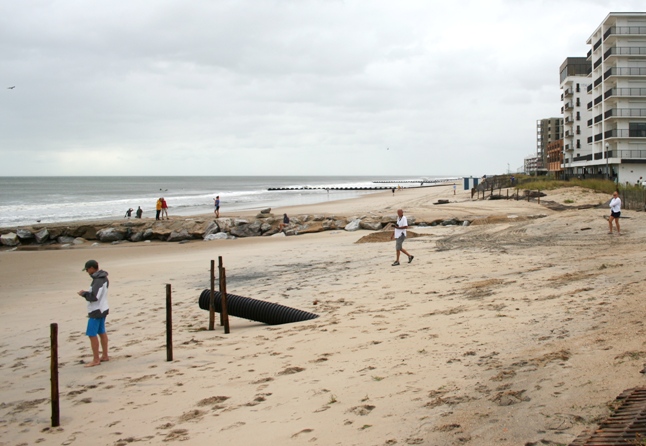 An assortment of news crews from Fox-owned TV stations along with NBC's WCAU from Philadelphia were two of the most common TV crews reporting live from downtown Rehoboth Beach this past week.

Of course, both Salisbury stations, WBOC and WMDT, where in Rehoboth Beach as well. With the permission of the Star of the Sea Condo manager, this WBOC crew used the building to shield the truck and microwave antenna mast from high winds so they could feed video Saturday evening.

Police Chief Keith Banks speaks with Tisha Thompson of Fox 5 (WTTG) of Washington, D.C. The satellite truck actually belongs to WAGA, another "Fox 5," from Atlanta. Fox TV crews from Atlanta, Philadelphia, D.C. and Detroit produced reports for all of the Fox stations using the truck. But it had a failure Saturday night as the hurricane approached. 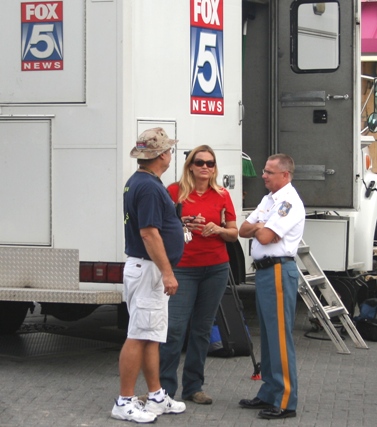 The Baltic Gas, the last of the five liquefied petroleum gas (LPG) tankers anchored east of the Indian River Inlet for the past few weeks, departed due east around 10 p.m. Friday as the hurricane approached.

But what were the five tankers doing there for weeks, and will they return now that the hurricane has departed?

In an e-mail from Jan Eghoej, head of gas operations for Maersk Tankers, he writes that the tankers have been used for floating storage for Sunoco. Each tanker is loaded with approximately 12,000 mts of butane. The crews await to re-enter the Sun Oil terminal in Marcus Hook, Pennsylvania to discharge the cargo back to the shore tanks.

He noted that the terminal has routine maintenance each year. That is when they hire LPG vessels to take the butane on board and then discharge it back to shore once the terminal is ready.

The three vessels, Eghoej wrote, "will be off the coast for 60 to 100 days and the first ship is expected to re-berth [in] mid-September 2011. The vessels are very safe and have a sophisticated safety system on board and are designed to carry the butane in a safe environment."

"In case the hurricane reaches the area and the masters do not feel it will be safe to remain at the position they will proceed further out to sea," Eghoej wrote earlier this week. Maersk has "high requirements for safety and will not jeopardize the safety for neither the environment, ship's crew or the population in the area."

Eghoej says Maersk only operates three of the gas tankers, the Maersk Harmony, Nordic Gas and Baltic Gas. The two other gas tankers, Desert Orchid, pictured above, and the Dancing Brave, are owned by Petredec in Singapore and are not under Maersk operation, Eghoej added.

Michael Globetti, DNREC spokesman, says vessels anchored beyond Delaware's three-mile territorial waters are in federal jurisdiction. "Because of where they conduct their business -- at the Marcus Hook refinery in Pennsylvania -- the tankers are not under any permitting stipulations from Delaware, nor DNREC," Globetti added.

As for permits, Kneen noted, they do not need a permit to actually get to the Delaware Bay. Before they arrive, she says the Coast Guard often sends a boarding team to check the vessel for proper paperwork and crew before they enter the river.

As of Sunday evening, all five tankers are in the Atlantic Ocean miles from the coast. They will likely return to the area for better cell phone and Internet access. To view what vessels are currently here, check this AIS chart.

The cast and crew for ABC's Extreme Makeover Home Edition were in the Rehoboth area this past week.

Michael Moloney and Paige Hemmis were on hand when this latest "make over" was announced.

The show is building a new complex for Dale Dunning's Jusst Sooup Ministry. The soup kitchen currently uses the Rehoboth Presbyterian Church of Midway, across from the Rehoboth Mall.

Photos above by Mati Hari

While at the Atlantic Sands in downtown Rehoboth Beach, the cast and crew filmed a few segments along the boardwalk. 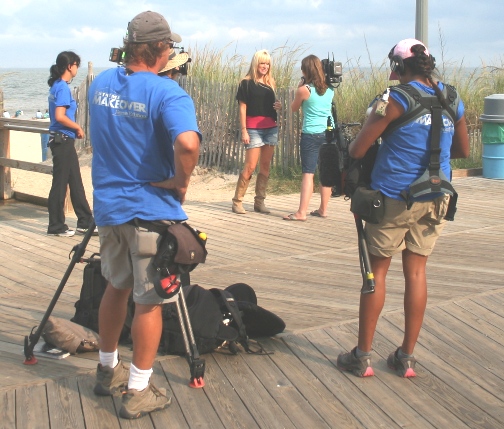 One of the crew members "shushed" passing visitors and seemed annoyed as he waived away curious onlookers. They also erected a sign on the boardwalk displaying this "important legal notice." 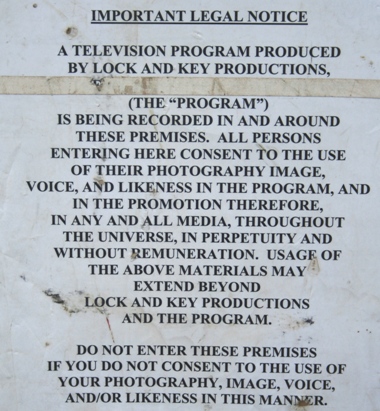 See these News Journal or WGMD.com articles for more details.

It is official! The Rehoboth Beach sign crews have been erecting smoke-free park signs the past couple weeks.

The ordinance was passed on April 15, but did not take effect for 30 days. Here is a Cape Gazette article with more details. The fine print on the sign reads: This sign is made possible through the Delaware Division of Public Health with funding from the American Recovery and Reinvestment Act. 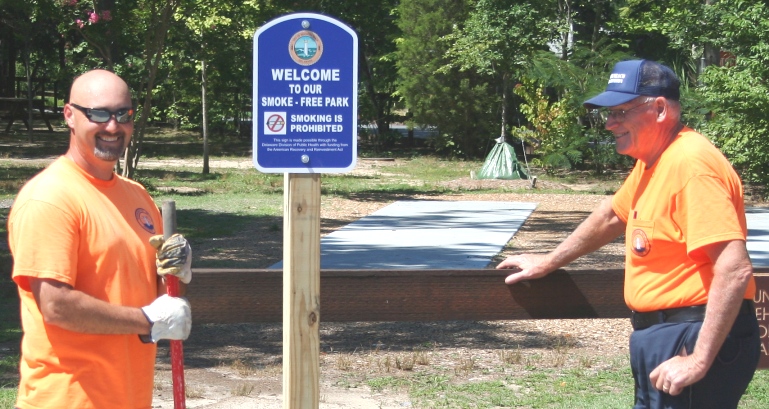 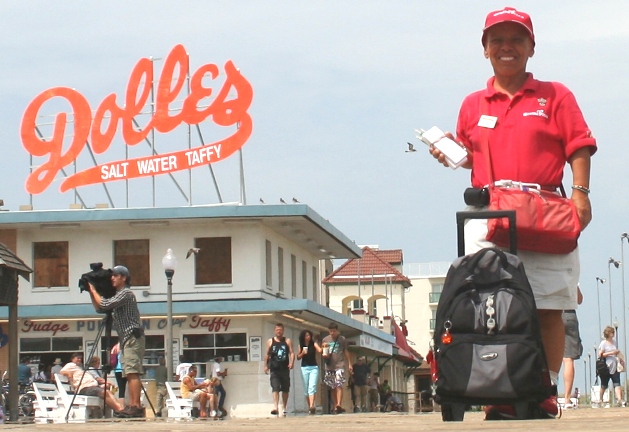 She is still undergoing chemotherapy treatment for breast cancer. But she says she does not feel weak or tired. Please keep her in your prayers. 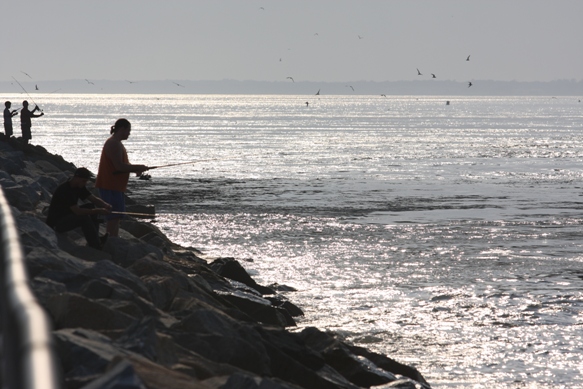 ENJOYING THE AFTERMATH OF IRENE, SUNDAY 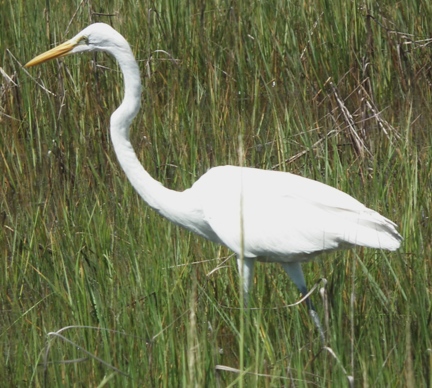 MAN IN NORTH SHORES INJURED IN FALL, FLOWN TO TRAUMA CENTER--- An 83-year-old man fell about six or seven steps and struck his head on drywall Friday. It happened in a large home on Ocean Drive in North Shores and was reported around 9:35 a.m. EMS personnel said he "dented" the drywall when he struck it with his head. They took him to the Cape Henlopen State Park lot where a state police helicopter flew him to Christiana Hospital. His injuries did not sound life threatening. The medevac was more of a precaution in case he sustained a serious head injury.

ANOTHER BEACH BAG STOLEN? A big blue purse was reportedly stolen between Baltimore and Rehoboth avenues before 4 p.m. on Wednesday. It contained ID and keys.

HOME INVASION REPORT IN SEA SPRAY VILLAGE--- Delaware State Police were summoned to Dunce Circle in Sea Spray Village, west of Lewes, around 5 a.m. Saturday after a woman said she found a man in her home. The man struck the 45-year-old woman in the head with a tree branch before fleeing.

WOMAN INJURED TAPING WINDOWS FOR HURRICANE--- A 33-year-old woman was taken to the Millville firehouse around 2 p.m. Saturday. She had been helping a neighbor tape the windows in preparation for the hurricane. She fell about three or four feet and suffered a knot on her cheek, cut under eye and had rib pain. She was taken to the hospital.

Vote for your favorite park (SEARCH: Cape Henlopen) to get park $$ from Coke

Increase in children reported missing at beach this season

Despite recent robbery, Dewey crime is down

Another suit filed on Dewey project

Many Rehoboth visitors heed the orders to leave

Elderly brave out the storm

In Bethany, locals not so eager to leave

At Bethany Beach, the curious linger