ELECTION THIS YEAR IN DEWEY!

There will be an election this year in Dewey Beach. The deadline to file to run for Dewey Beach commissioner was 5 p.m. Thursday. Four candidates have filed for the three commissioner seats that are up for grabs next month. 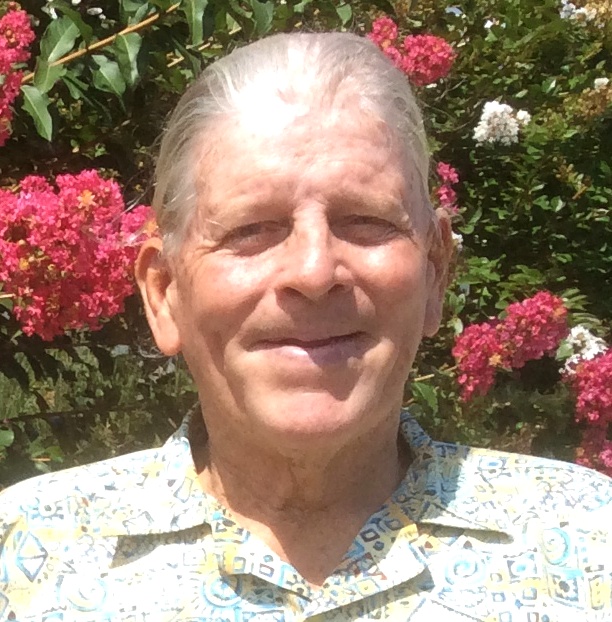 Dale H. Cooke who served as town commissioner from 2002 to 2008 (he was never mayor, as mistakenly reported last week). This is his bio/letter to voters. 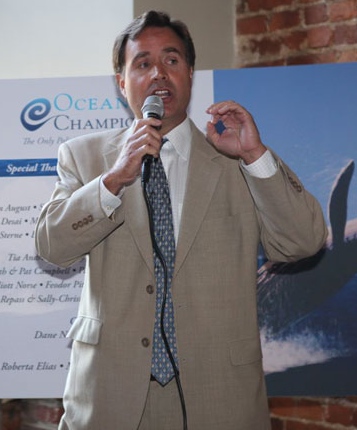 Mike Dunmyer, a long-time property owner. Here is his bio. 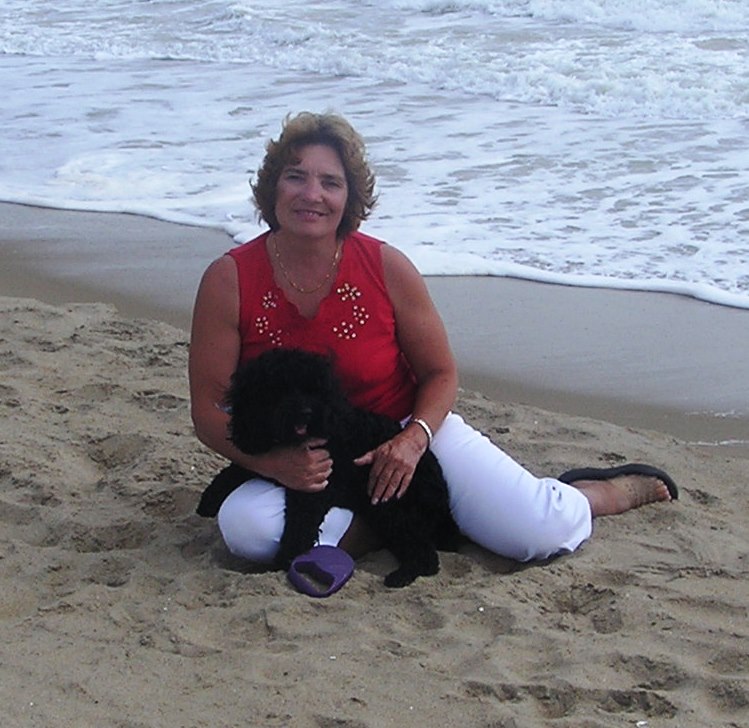 Mayor Diane Hanson, who has been a town commissioner for eight years, elected in 2007 and serving as mayor for the past five years. She is the only incumbent. This is Mayor Hanson's flyer to the voters. 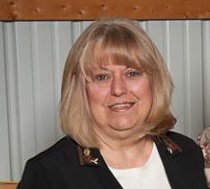 Dell C. Tush, who served as town commissioner in 2005 and as mayor from 2006 to 2009. Tush said Sunday she is working on her mission statement which we will have next week.

Cooke, Dunmyer and Mayor Hanson are running as a team for the three open seats.

The Dewey candidates' forum is scheduled for August 29 at 4 p.m. at the Dewey Lion's Club. Dewey election day is Saturday, September 19.

For more details on the candidates, see this Cape Gazette article by Chris Flood.

The EMS crews worked on the man for about 30 minutes at the scene. During that time, he went from not breathing to alert and talking, after paramedics administered several rounds of medication. 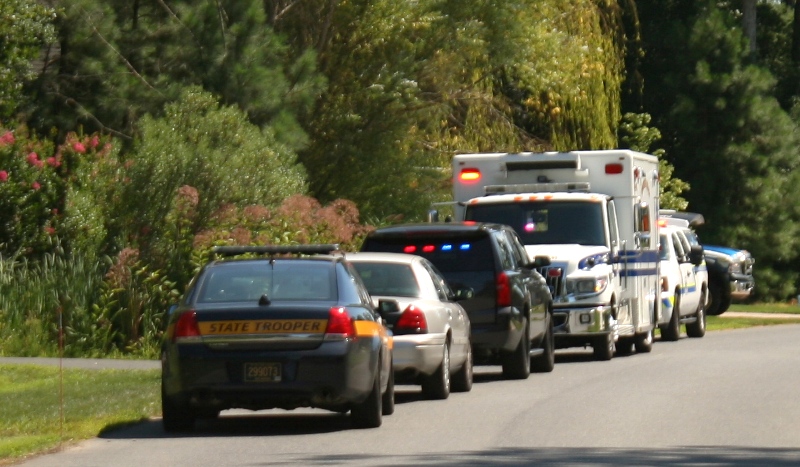 Neighbors, mostly retirees out walking dogs, were surprised to see the activity on Cornwall Road, a road lined by large million dollar homes.

Cpl. Jeffrey R. Hale, state police spokesman, confirmed Sunday that this incident is being investigated as a suspected drug overdose and not an act of violence.

A few bicyclists have expressed concern this summer regarding stops of fellow bicyclists by Rehoboth Beach police, most notably for violating the NO-LEFT-TURN signs on Rehoboth Avenue. In some cases they say the bicycles are getting stopped as motor vehicles continue to make the illegal turns, right in front of the bike officers.

Seasonal officers, says Lt. William L. Sullivan, issue the citations to bikes. They are not allowed to stop motor vehicles, he says. The full-time officers stop cars but not bikes. Seasonal officers who are trained on bike are responsible for the bike enforcement, hence the Bike Enforcement Unit (BEU), he says, and "they see much more than we [full-time officers] do and have much more contact with citizens especially during the busy times," he adds.

When full-time officers in a patrol car observe a motor vehicle making a violation such as the NO-LEFT-TURN sign, Lt. Sullivan says the officer will make the stop, but only if it is safe to do so and when the officer does not have to commit two violations to intercept the violator.

"I can assure you that the warnings-to-actual-tickets ratio for bike violations is very high," Lt. Sullivan states. "What most people see is the stop, calling in to dispatch to check for wants and warrants, then the release." What they may not realize is that no citation had been issued or the bicyclist simply received a warning. 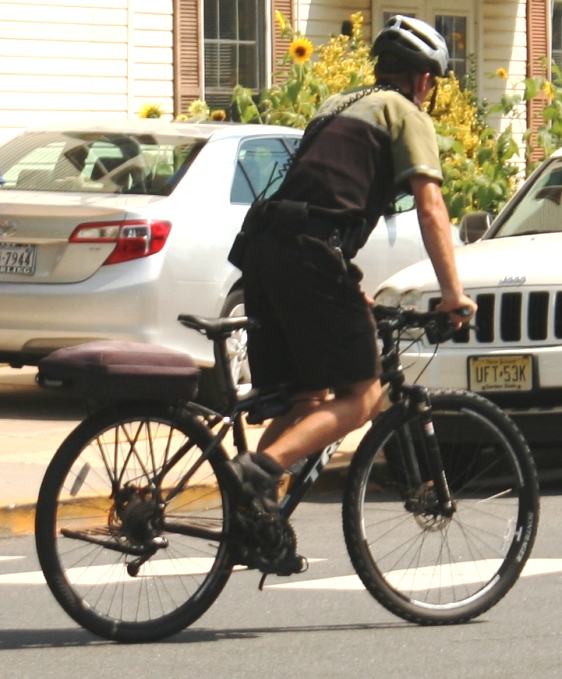 According to Rehoboth Beach PD statistics for the month of July, Lt. Sullivan says the BEU issued a total of 137 tickets for various bike violations and a total of 161 warnings. "As you can see," he adds, "this is more than a 50-50 ratio and does not take into account when a bike officer or foot officer reminds riders without calling in the stop. This also does not take into account those bicyclists contacted during the OHS Safety Campaigns."

By comparison, he points out that Rehoboth Beach full-time officers issued a total of 241 traffic tickets for the month of July and 115 warnings. These numbers include those targeted campaigns for various traffic violations including seatbelts, cell phones, speeding and DUI's. The warnings also do not reflect all warnings given for other violations encountered during a traffic stop other than the primary offense. 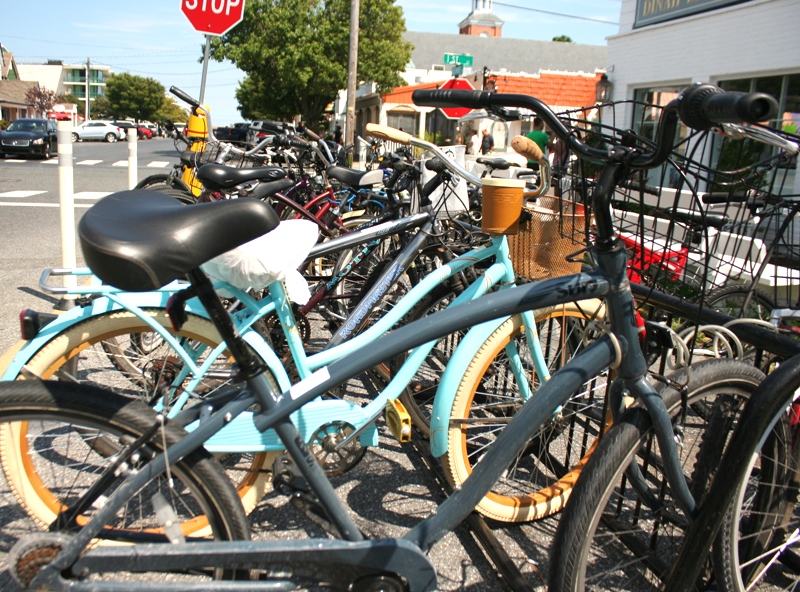 "As far as bicyclists being stopped for violations," Lt. Sullivan writes, "I have responded several times to inquiries involving bike violations with some of the following information. The Rehoboth Beach Police Department has a responsibility for pedestrian safety including those who operate bicycles inside the city limits. The traffic laws that apply to vehicles also apply to bicycle operation under the rules and regulations of our city ordinances. The regulations can be found online at the following web address www.cityofrehoboth.com under the Government tab and the City Code section."

"The purpose of these regulations and enforcement," he adds, "is not to punish those who commit these violations, it is merely to change the behavior of the public and keep everyone safe. Our city hosts a tremendous amount of visitors each summer and they, along with many of our local citizens, operate bicycles. It is imperative for the safety of everyone that vehicles as well as bicycles adhere to these rules and regulations. We have conducted many pedestrian safety campaigns in conjunction with the Office of Highway Safety to inform/remind pedestrians and bicyclists about safety concerns especially within an area that sees a tremendous increase in population. I hope you understand that we have a responsibility to our citizens and visitors to maintain the streets in a safe manner." 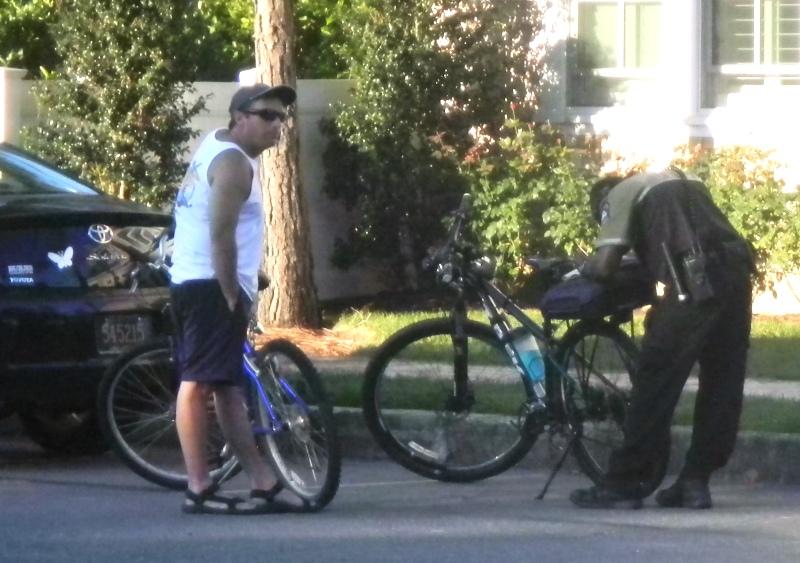 Are bicyclists being stopped in greater percentages than drivers of motor vehicles; do cyclists break more laws than motorists; or does it even make any difference?

"As an engineer I have to say that there is inadequate information to draw any conclusions," says Tony Pezone from Sussex Cyclists. "How many cars make left turns? What percentage of cars make left turns? How many of those are ticketed? Same questions for bikes. I hardly ever see anyone making left turns, cars or bikes. If more cyclists are stopped maybe it is because more cyclists don't follow the rules. I don't know the answer... but the best advice for cyclists or drivers is follow the rules and then you don't have to worry about who is not being treated fairly. This in my opinion is a nonissue."

The beach resorts were packed Saturday and, come late afternoon, EMS crews were overwhelmed with ambulance calls. To add to the demand, two men suffered spinal injuries in the Rehoboth Beach surf after 4:30 p.m.

When a man approximately 60 years old was injured near the Henlopen, the beach patrol loaded him onto the back of the RBP Gator and drove him to the north side of the Henlopen condo to wait for this ambulance to take him to Beebe Hospital. He was in severe pain and lost feeling below his waist after a serious neck injury. No medevac helicopter was available.

Almost 15 minutes later, a 42-year-old man suffered a spinal injury near the Wilmington Avenue jetty. His injuries did not sound as serious but he was taken by ambulance to Beebe Hospital as well.

On Sunday, a 70-year-old man who had a previous neck/back injury was injured in the Ocean City surf at 74th Street just before 11 a.m. He experienced tingling in his left arm/leg after having gotten knocked to the ground by a wave. The state police helicopter flew him to Baltimore.

Vandals have struck several targets on Coastal Highway in the Rehoboth area in the past month.

Lynn Brittingham, All Saints' Parish Thrift Shop manager, says she thinks the vandals struck the shop's truck late Sunday night on August 16. About that same time, they tagged the now-vacant Pottery Place, which is in the same shopping center, Rehoboth Beach Plaza (Baymart). 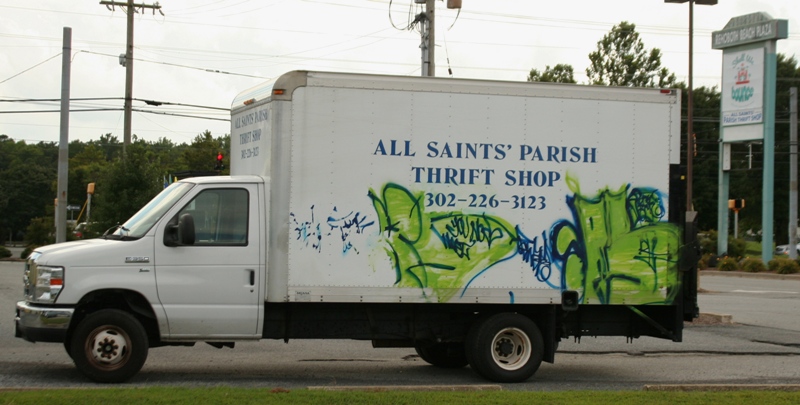 Other recent targets have included traffic signal boxes and transformers such as this one in the Safeway parking lot. 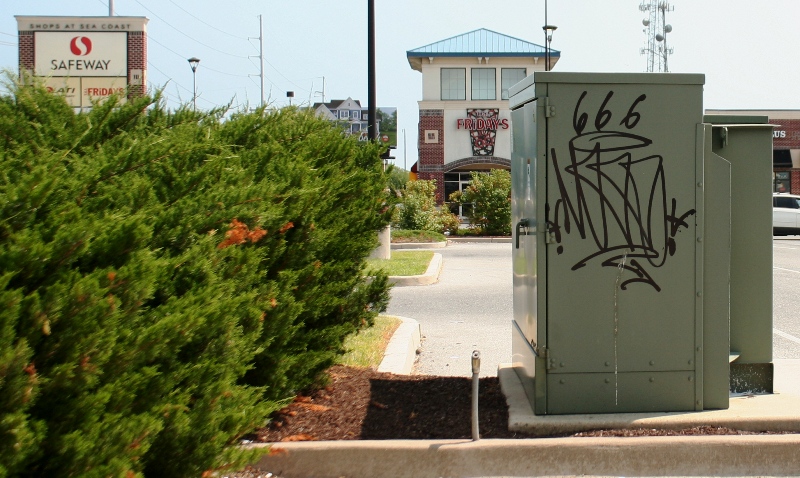 This is the former Millman's Appliance building at 18920 Coastal Highway, a short distance north of the Safeway.

Next to the old Millman's, similar writings were painted on the Exxon at the intersection with John J. Williams Highway. 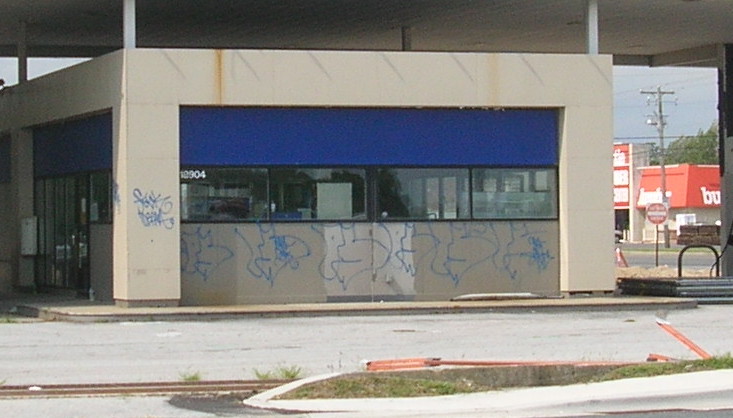 She is an artist and designer who enjoys creating spaces and compositions whether they are houses, on panel, canvas, made of textiles, or even furniture. Like many great artists, whose minds never stop putting things together, Chryssa Wolfe never stops creating.

She is a Washingtonian from the Palisades Neighborhood with her studio in Southern Maryland along the Wicomico River. Here she is in her little black dress with Eric Davison, gallery director. Her painting, appropriately, is the Little Black Dress. 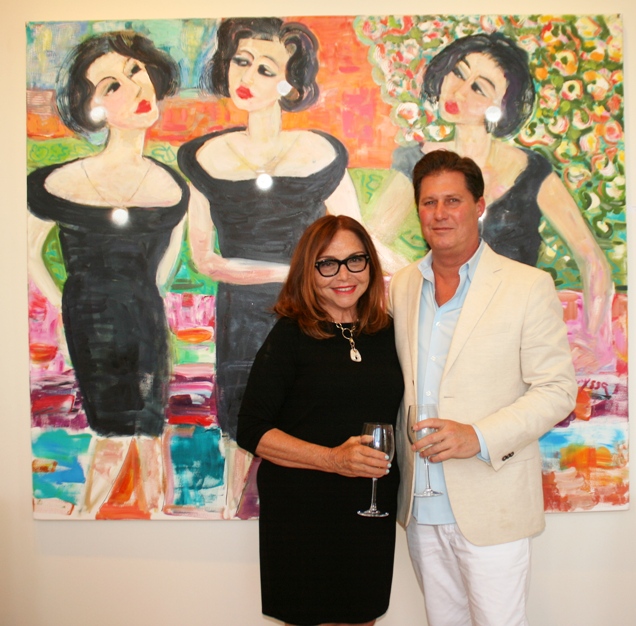 She has been painting for 60 years, since she was a child, preferring oil over acrylics.

If one considers any collection of artworks, you could not fail to recognize Wolfe's work. Her characters are always strong upright and vivid, typically women painted with love and sympathy. Her diva series has been popular because it shows strong women in brilliant color.

On the left is Thinking Cap, her self portrait. In the center is Yaya's Doylies followed by Friend in My Studio. 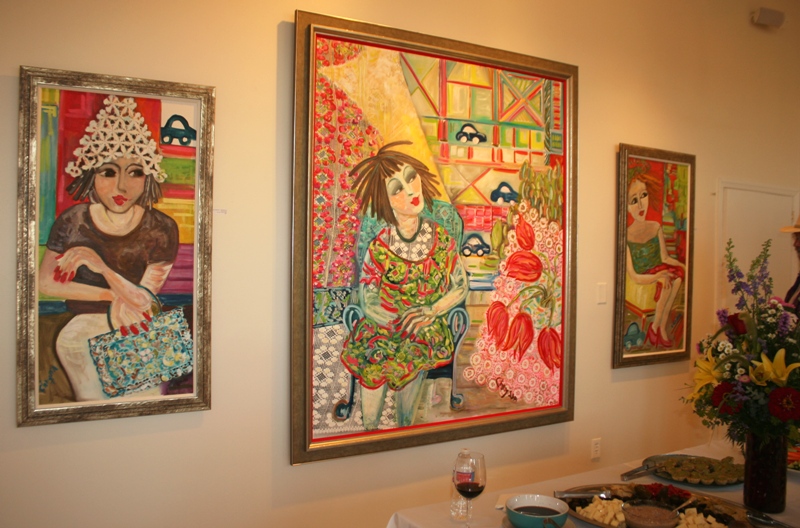 She spent her childhood in Greece. Her Greek background with American education are a beautiful mixture of rigor and imagination. It is enjoyable to see an artist whose paintings one would recognized from far away.

Her exhibition appears at Gallery 50 through Sept. 15. For info please see this Cape Gazette article.

MERR NEWS: 2 MORE DEAD LOGGERHEADS--- Suzanne Thurman, MERR Institute executive director, says her organization investigated the deaths of two more loggerhead sea turtles this past Saturday. One was found dead at Tower Road in the Delaware Seashore State Park, and the other was in Fenwick. As for the cause of death, she says one appears to have been struck by a boat propeller and the other was undetermined.

Ready for Biden? (RNC talks about Aug. 22 fundraiser for Clinton in Rehoboth)

For fitness or leisure, on trails or public roads, "Delaware is fantastic for biking."

Crash near Rehoboth sends mother and baby to hospital

Drivers fed up with limited payment options for Rehoboth meters

SoDel Concepts carries on one year after Matt Haley's death

Attorney General rules in favor of Dewey on property purchase

Enforcement stepped up on Maryland waterways after fatal accidents

No "Advisory Opinion" from judge on new performer law in O.C.

Young hero honored as fire chief for the day for saving aunt's life in O.C.

Baltimore men arrested after robbing a taxi driver in O.C.