Having trouble viewing this report or its photos? Click here: http://henney.com/weekend15/ or e-mail alanhenney@aim.com

DNREC investigators returned to Rehoboth Beach this past Wednesday to hand deliver a compliance assessment report and notice of violation to city officials. This was a result of the DNREC investigation that began on August 13 at the city's maintenance yard on Lincoln Street.

Some changes are already visible, including new signs and locking of the gate to prevent unauthorized persons from dumping trash, covering dumpsters to discourage birds and insects, mowing grass and removing litter, removing contaminated soil and blocking access to the trash transfer pit.

Mayor Sam Cooper along with Greg Ferrese, city manager, and Mel Craig, public works director, met with the DNREC personnel. Noticeably missing was involvement from city commissioners who, according to sources, were not invited to attend the DNREC meeting.

Operating a solid waste transfer station without a permit.
Odors consistent with the storage and management of municipal solid waste beyond the facility boundary.
Accumulation of litter outside of the daily holding area.
Improper management of the leachate collection and disposal system.
Presence of nuisance organisms/vectors (birds and flies).
Leaking waste storage container. Not covered nor impervious to weather elements.

The violation notice did not have an associated fine. David Perrego, DNREC senior environmental compliance specialist, said Friday that the city has 30 days to respond. DNREC could fine the city if not satisfied with the progress.

The city has supposedly taken action to address the leachate collection and prevent dumpster juice from entering the ground. But the ground remained saturated with dumpster juice this past week. 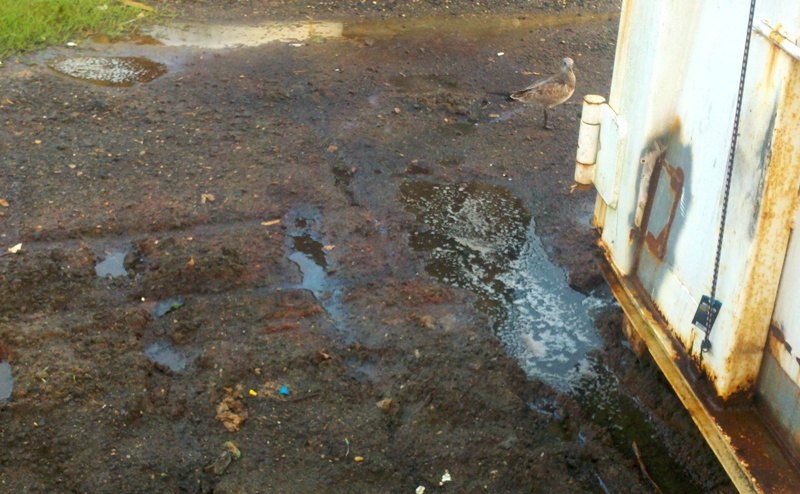 Neighbors complained that the city had been using the city yard as a garbage transfer station, to store and transfer waste from the trash pit. The city had also been accused of dumping residential trash in the pit for years, not just during the recent trash truck failures. Ferrese said Thursday that "the city has a 1991 agreement with the state to use the site, and the state and city agreed to improve the agreement. We will do a better job of cleaning the site and at the same time provide excellent refuse service to our residents and visitors." He provided a copy of this 1991 letter from DNREC which had allowed the city to remove and store trash from the beach and boardwalk at this location, but not residential refuse. 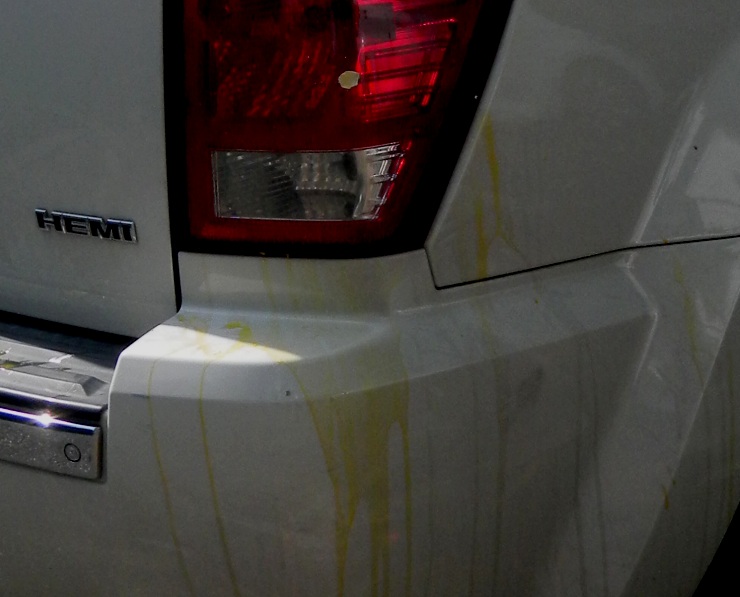 About a half dozen Rehoboth Beach visitors and property owners woke Sunday to find their vehicles had been egged. Most of the reports were from Columbia Avenue, but police investigated one on Kent Street as well.

The skies were looking mean for the 25th anniversary of drag volleyball this past Sunday. But still, the event was as popular as always, attracting hundreds of spectators. 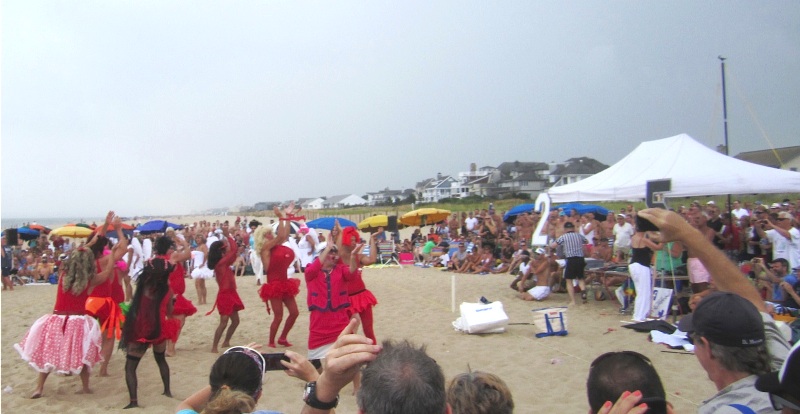 A thunderstorm arrived immediately after the teams finished their first routine. Strong wind threatened to blow umbrellas and other loose objects. Lifeguards soon evacuated the beach because of lightning.

The teams returned later in the afternoon to continue the match along with their cheers and numbers. Eventually evil triumphed over good; the Devils beat the Angels, 15 to 9. 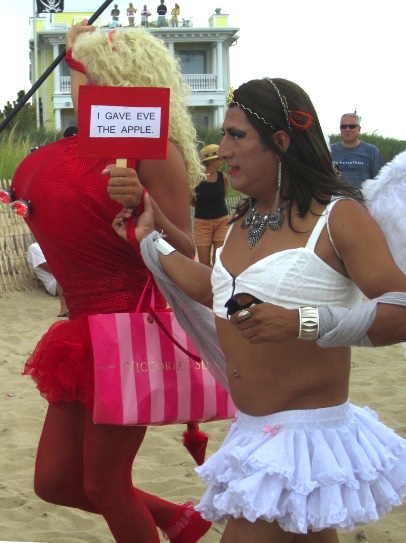 The games started in 1988. Read more about the history in the September 2008 Letters from Camp Rehoboth.

This is the challenge that faced public works crews the following morning. 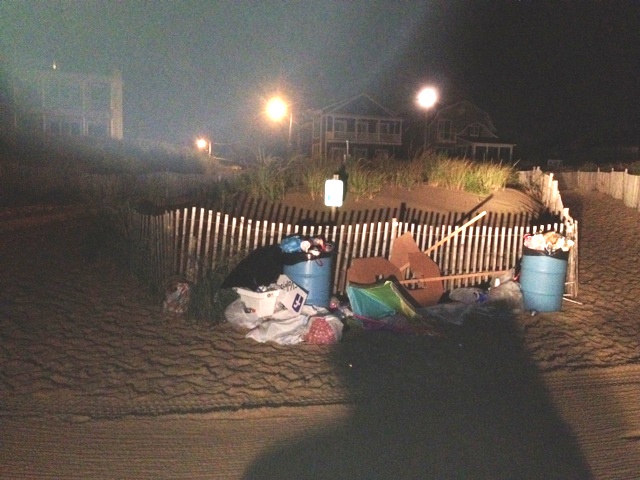 Dewey Beach Enterprises (DBE) announced this past week that it has completed the sand renourishment project at Lighthouse Cove (formerly Ruddertowne) on the Rehoboth Bay at Van Dyke Avenue. The public beach expansion is part of the DBE redevelopment project underway at the new Lighthouse Cove resort.

The sand used to renourish the beach had been excavated from the construction site. Dewey Beach property owners have expressed concerns about nails and debris found in the sand, unclean water and trucks parked on the beach and obstructing access.

The property owners hired Tony Johnson Crivella and his beach tractor service to clean the new beach. He said a few of the local residents gave lots of compliments of how nice the beach looked when he finished. 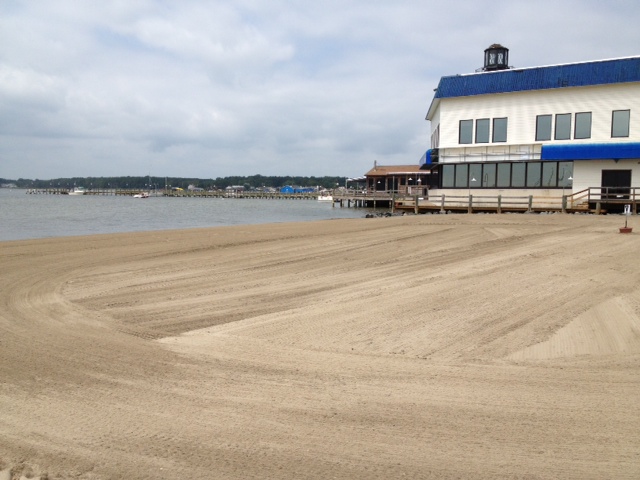 For details on the complex, visit the Lighthouse Cove website.

Greg Ferrese, who has been the city manager of Rehoboth Beach for three decades announced his retirement earlier this summer. Ferrese and Kathleen, his wife, said they want to take it easy, travel and enjoy life while they can. 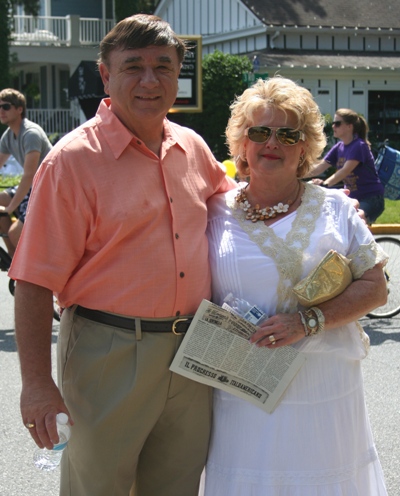 This past Friday, Mayor Sam Cooper sent a message out via the city's E-News:

The City of Rehoboth Beach is now accepting applications for the position of City Manager to succeed retiring City Manager Greg Ferrese. Ferrese will be retiring in December after 32 years of service to the City. The City Manager serves as the Chief Administrative Officer of the City, and is responsible for the oversight and management of all city operations and staff.

Requirements for the position include a Bachelor's degree in public administration or a related field and seven to ten years of local government experience with at least five years in progressively responsible management/supervisory positions. Experience in a seasonal/tourist community, human resources expertise, strong financial skills, a Master's degree and International City Managers Association-credentialed certification is preferred.

Application may be made online via the City of Rehoboth Beach website or by going to the Novak Consulting Group website. Applications are due by October 4, 2013. 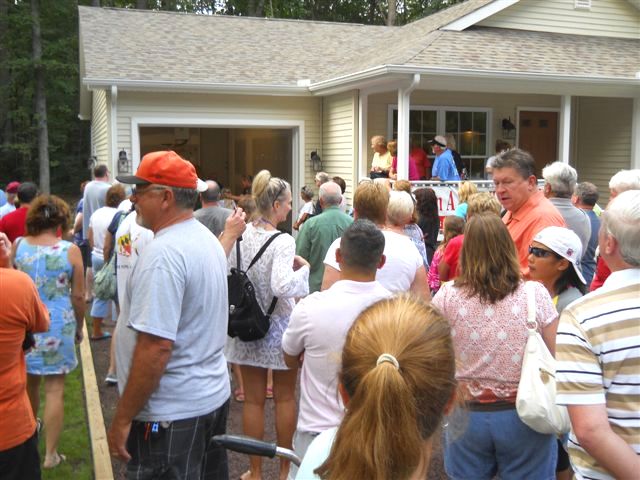 Robert Gilbert reports that the drawing for the Ocean Pines Volunteer Fire Department Raffle House at 82 Windjammer Road took place as scheduled on Labor Day. The winning ticket was 1149. The cost of the ticket was $100! See the OPVFD website for details.

Our appreciation goes to Jim Davis of dcfire.com who creates many of our banners, year after year.

We welcome sponsors and partners for 2014. Please contact us if you have an idea or proposal!

Please inquire about 2014 banner rates too!

2 MORE DEAD DOLPHINS IN REHOBOTH AREA--- The MERR Institute has been busy investigating recent dolphin deaths, including two this past week in the Rehoboth area. On Thursday, a badly decomposed dolphin came to shore at Brooklyn Avenue around 2 p.m. The following morning, MERR personnel were called to the Gordon's Pond area of the Cape Henlopen State Park to investigate another dolphin death. No word yet from MERR on cause of death.

2 MORE MOPEDS STOLEN FROM SAME RESIDENCE AS PREVIOUS YEARS--- Rehoboth Beach police investigated the fifth and sixth moped/scooter thefts of the season this past week. Police received the report around noon on Tuesday that two mopeds were reportedly taken from a residence on Sussex Street, probably the previous evening. Det. William Sullivan describes the first moped as a black 2007 Cobra with Delaware tag MP1493 and RB parking permit 116. This moped, he notes, had a Key West decal and a plastic bag over the cap. The second moped is a yellow 2005 TGB with Delaware tag MP4280 and RB parking permit 115. It also had a plastic bag over the gas cap. Both of the mopeds were parked near the street in front of the residence. Det. Sullivan says two mopeds were reported stolen from this same residence, one in 2011 and another in 2012.

Six candidates running for one of three spots on the Bethany Beach Town Council (election on Sept. 7)

Virginia's Wallops Island to launch spacecraft to moon (this Friday)

This report is being e-mailed to 1,703 recipients. Thanks for your support!